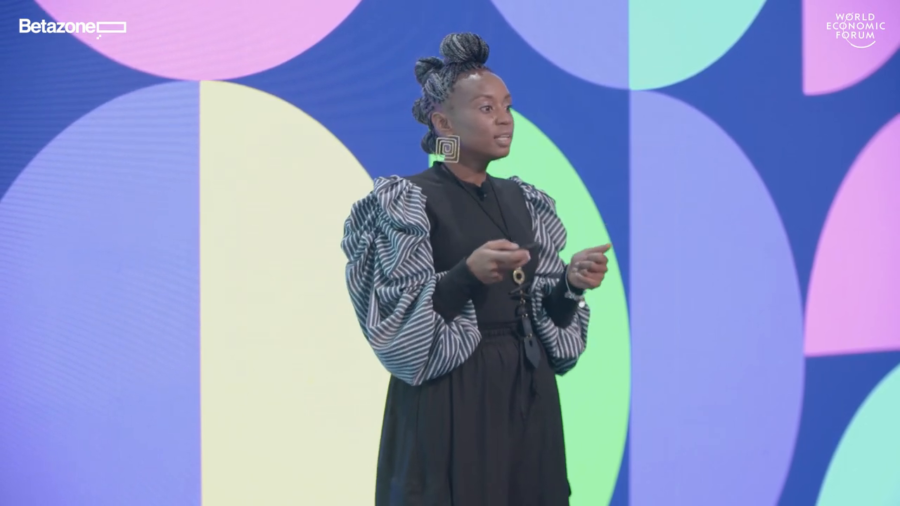 The Fight for Artistic Freedom

Wanuri Kahiu: Hi. My name is Wanuri Kahiu. I’m just gonna start with the trail­er of my film Rafiki and then we’ll get start­ed after.

In 2018, Rafiki was banned. It was banned because it was a same-sex film based on a sto­ry called Jambula Tree. 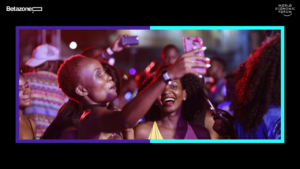 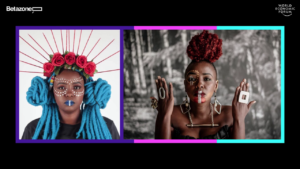 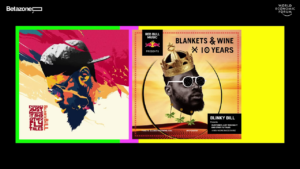 And though it was­n’t a shock to many oth­ers it was quite a sur­prise to me, because the Kenya that I know, the Kenya that I love, is always full of music, con­certs, the beau­ti­ful sounds of Muthoni Drummmer Queen, the absolute won­der­ful voice of artists like Blinky Bill. I mean, we have extra­or­di­nary artists and a very, very, very active social media who call them­selves KOT—Kenyans on Twitter—who do not stand for any­thing. 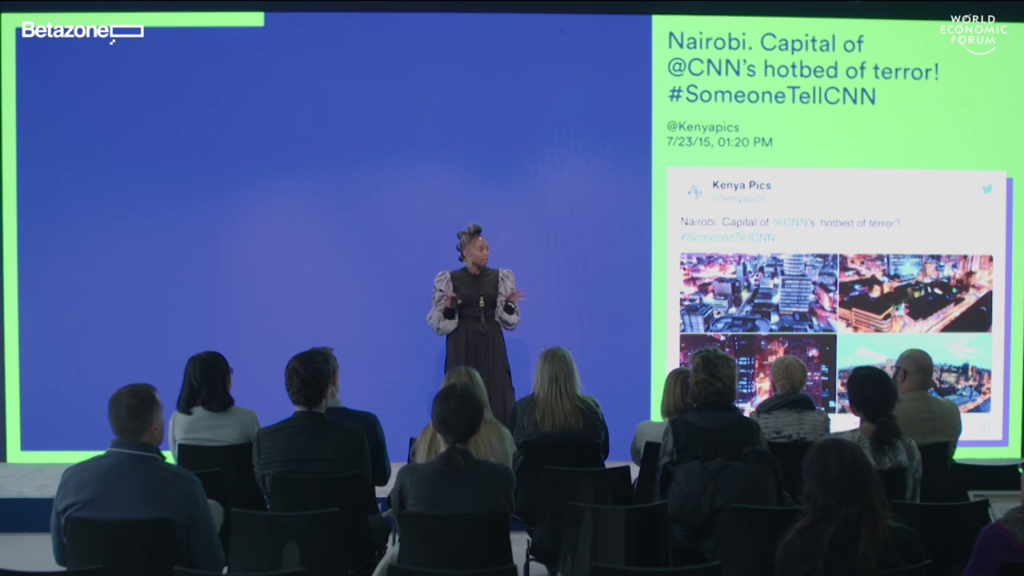 So when any­body says any­thing unto­ward about Kenya, or the coun­try, or any­body, they real­ly attack them and even come up with a ​“SomeoneTell” hash­tag. So it was #SomeoneTellCNN, it was #SomeoneTellNewYorkTimes. I mean, we real­ly go hard when we do not like the way peo­ple speak about us. So we’re very vocal. We prac­tice our free­doms. And free­dom of expres­sion and free­dom speech is one of the things that we real­ly real­ly practice.

So when the film was banned, I was real­ly, real­ly, real­ly sur­prised. And what sur­prised me the most about the ban was the rea­son the Kenya Film Classification Board gave. They gave the rea­son that the film was not remorse­ful enough. They said that if I change the end­ing of the film and make it more remorse­ful, then they would give me a rat­ing. Because they did­n’t like the idea of legit­imiz­ing, or nor­mal­iz­ing, the LGBT com­mu­ni­ty in Kenya. Which was ridiculous.

But what it did, what the ban did, meant my par­ents could­n’t see the work. They only heard an offi­cer of the gov­ern­ment say that my work was so absurd, was so vile, that no vot­ing adult in Kenya could see it. That’s all they heard. And then the film was banned. So even though they want­ed to be able to advo­cate and sup­port the work, they could­n’t, because they had no con­cept of the work that I had done. 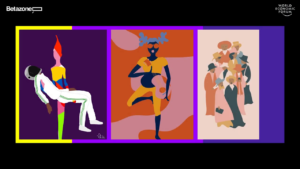 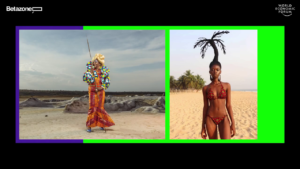 But the thing about Afrobubblegum work is that it’s not only mod­ern art. When you stretch back into the his­to­ry of African art, African tra­di­tion, African’s fan­tasies, cre­ation myths, they’re all full of joy. They’re all full of laugh­ter. And they’re not remorseful. 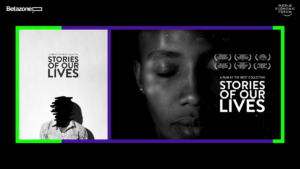 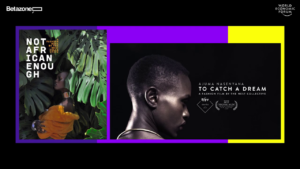 In 2014, a won­der­ful col­lec­tive called The Nest Collective, who make bril­liant work, made a film called Stories Of Our Lives that was based on real-life sto­ries of the LGBT com­mu­ni­ty in Kenya. They then fic­tion­al­ized the piece and they made it into these beau­ti­ful vignettes that were released in Toronto at the Toronto Film Festival. Stories Of Our Lives was banned. The pro­duc­er was jailed for a hard stint. And now, George Gachara, the pro­duc­er of the film, says that his film now lives in exile. 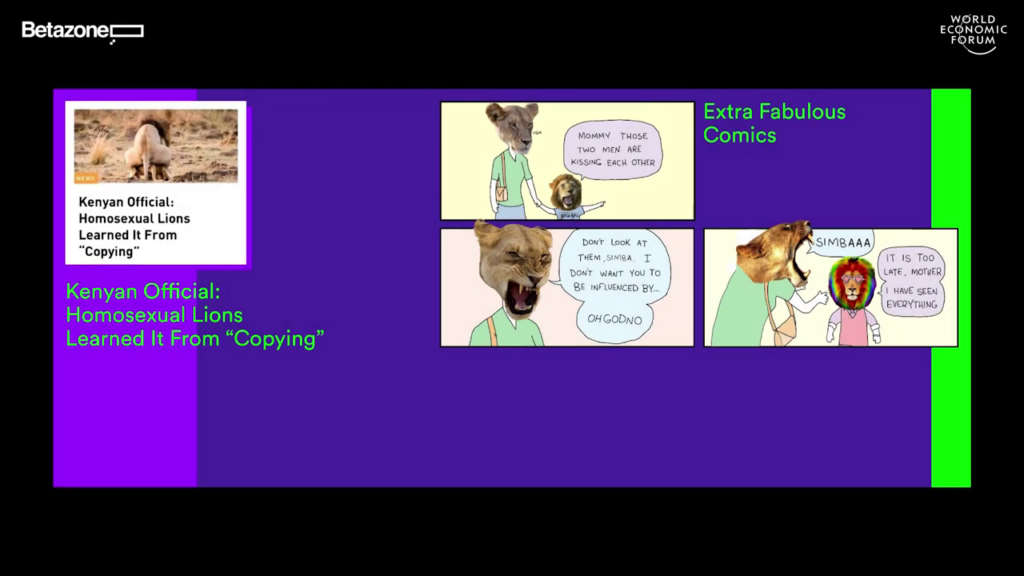 But. The Kenya Film Classification Board does not only ban films. They’ve extend­ed their para­me­ters to ban­ning music, musi­cians, stat­ues, and even lions. There was a pic­ture of two male lions mount­ing that cir­cu­lat­ed at one point. And what hap­pened is, the Kenya Film Classification Board said that these two mount­ing lions should be sep­a­rat­ed, should be coun­seled, and even sug­gest­ed that they ​“learnt that behav­ior” from tourists in the nation­al park that they had seen, and were repli­cat­ing that kind of behavior.

But the laws that were used to ban the films, that are used to ban art, and that’re used to ban lions, are old colo­nial laws or rem­nants of colo­nial laws. They were laws that were cre­at­ed before our con­sti­tu­tion in 2010. They’re laws that are based on the sedi­tion laws that banned Pan-Africanists like CLR James, George Padmore, Kwame Nkrumah, and Jomo Kenyatta in the late 30s in London, where they would come and dis­rupt the work that the Pan-Africans were doing. They would dis­man­tle the print­ing press­es that cre­at­ed their jour­nals that were cir­cu­lat­ed across the UK and also in Africa. But they used these laws, these sedi­tion laws, and they con­tin­ue to use these sedi­tion laws to ban work. 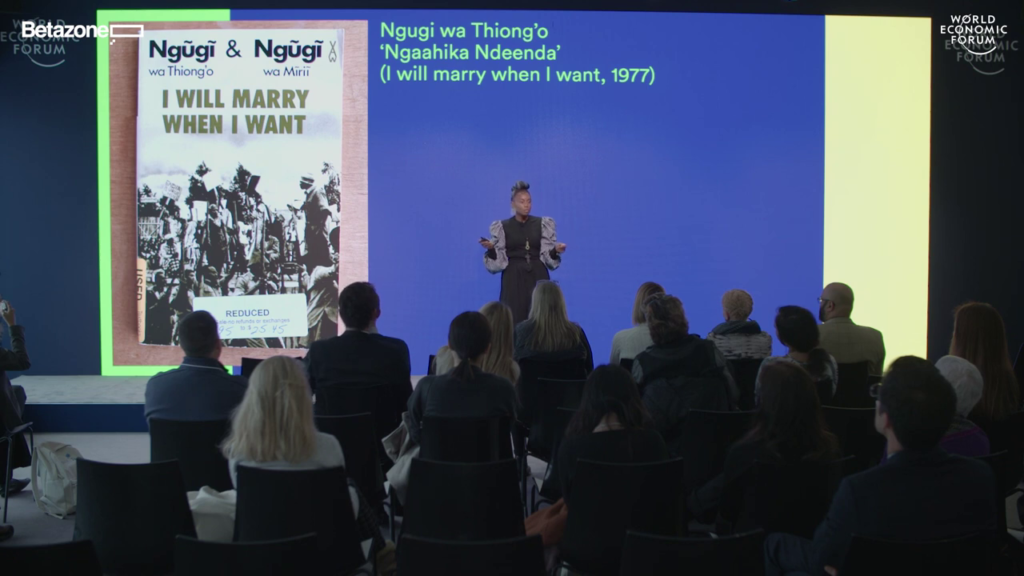 So, in the ear­ly 1980s one of our great lit­er­ary giants, Ngũgĩ wa Thiong’o’s work was banned, because of a com­e­dy he cre­at­ed Ngaahika Ndeenda, which is ​“I Will Marry When I Want.” And it was a sto­ry about class pol­i­tics. It was a sto­ry about mar­riage. It was a sto­ry about pow­er dynam­ics. And when this play was banned after a six-week run to a full audi­ence, Ngũgĩ wa Thiong’o was jailed for one year with­out a tri­al and with­out a charge. After that, he was fired from his job at the University of Nairobi, and then went into exile. So we lost one of our greats for a com­e­dy he cre­at­ed, his non-remorseful work. 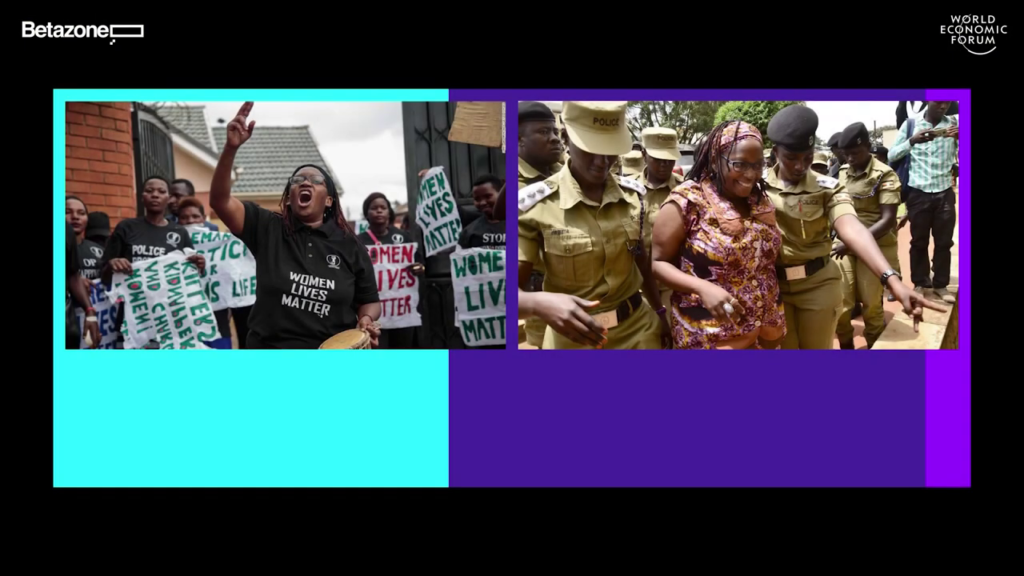 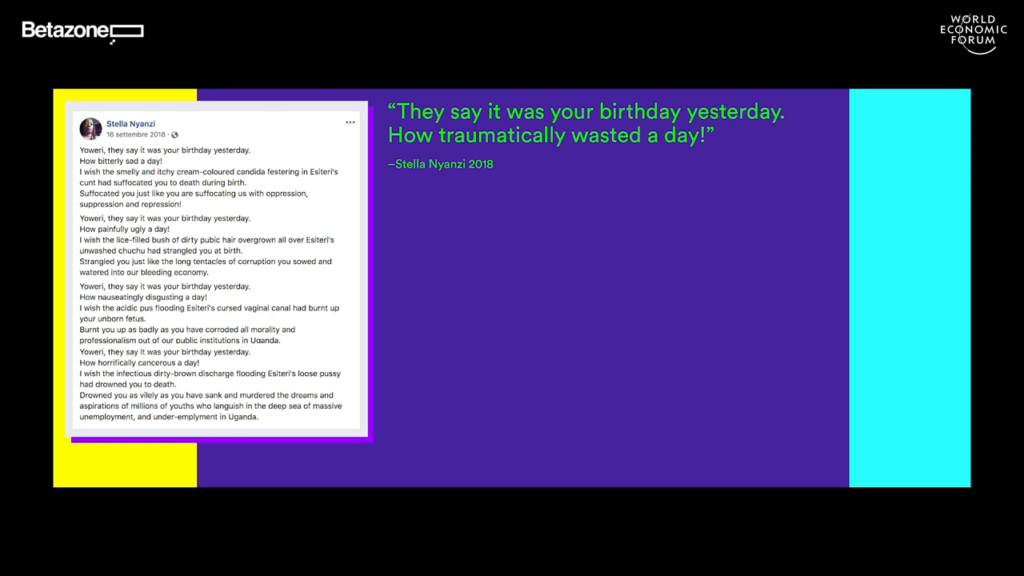 Now, the poem…was a lit­tle bit…risqué. But she used what she called ​“rad­i­cal rude­ness” to arouse the work, to arouse the thoughts, of lead­ers. But. Because of this poem that she wrote, Stella Nyanzi is still in jail until today. 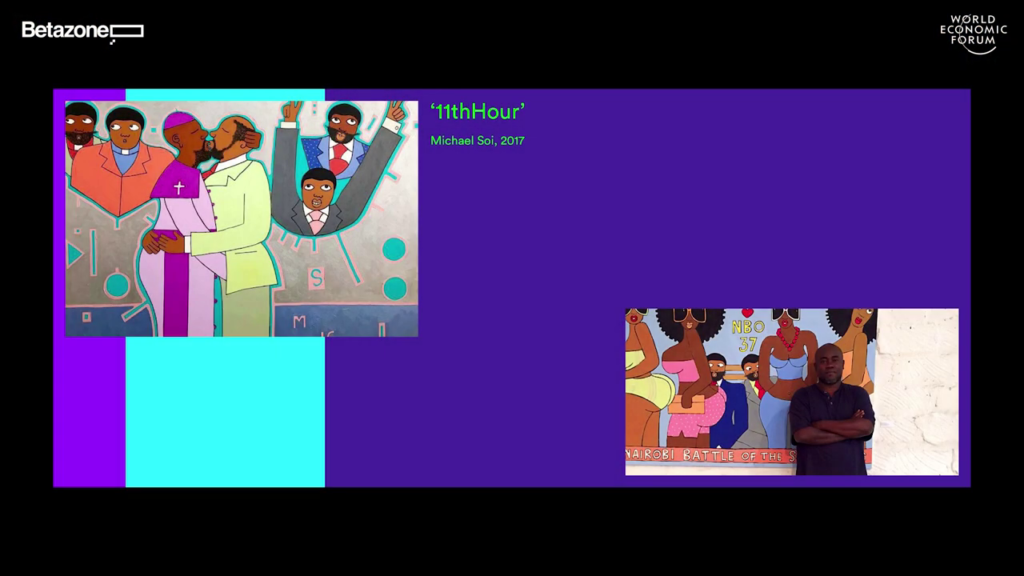 In 2017, Michael Soi as well as three oth­er artists, were com­mis­sioned by the National Museum to cre­ate pieces of work under the label ​“Speaking the Unspeakable.” But when they pre­sent­ed their work their work was con­sid­ered too unspeak­able to be seen, and the work itself was banned. 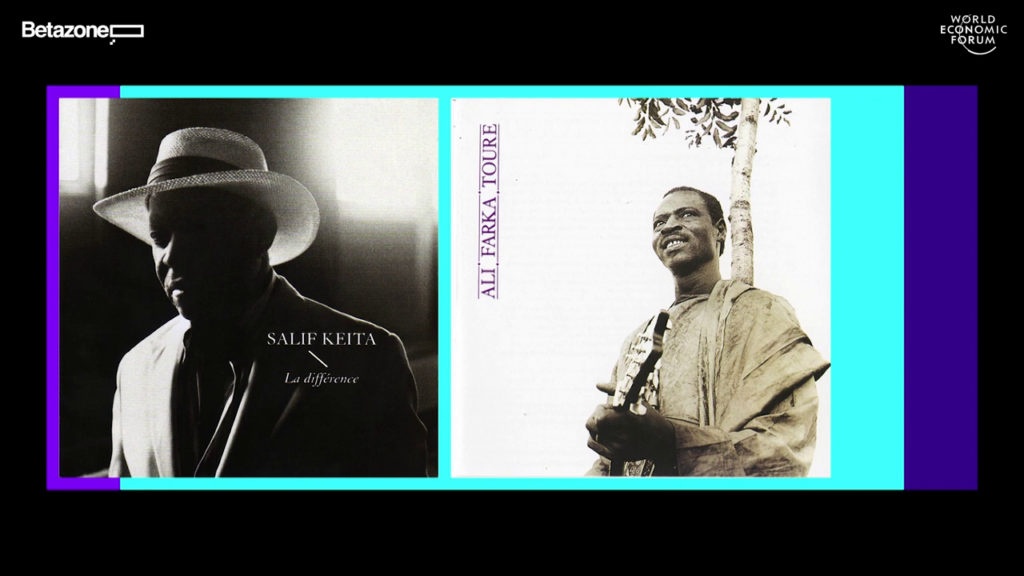 Between 2012 and 2013, for sev­en months, two thirds of Mali had no music, because it was banned. Now, imag­ine the world where Salif Keïta, and Ali Touré exist hav­ing no music from Mali, silenc­ing the voic­es, silenc­ing the art that was com­ing from these places, because it was not remorse­ful. Imagine what that does to a nation. Imagine what that does to a cul­ture. Imagine if we did not have that music today. How would we know, how would we expe­ri­ence Mali? How would we expe­ri­ence music com­ing from those regions?

Now, when I vot­ed for our con­sti­tu­tion on August 4th, 2010, I did it know­ing that my rights as a woman will be pro­tect­ed. And I did it as an artist know­ing that my rights for free­dom of expres­sion were enshrined in the con­sti­tu­tion, our bill of rights. Among the first pages of the con­sti­tu­tion it says Every per­son has an oblig­a­tion to respect, uphold, and defend the Constitution. So when our film was banned, we took the Kenya Film Classification Board to court. And we sued them for our rights to free­dom of expres­sion. We’re still in court now. But as part of the court case, we asked for the ban to be lift­ed for sev­en days so that the film could be nom­i­nat­ed, by Kenya, as a for­eign entry into the Oscars. And the judge at the time upheld our wish­es, and for sev­en days the film was shown across Kenya. 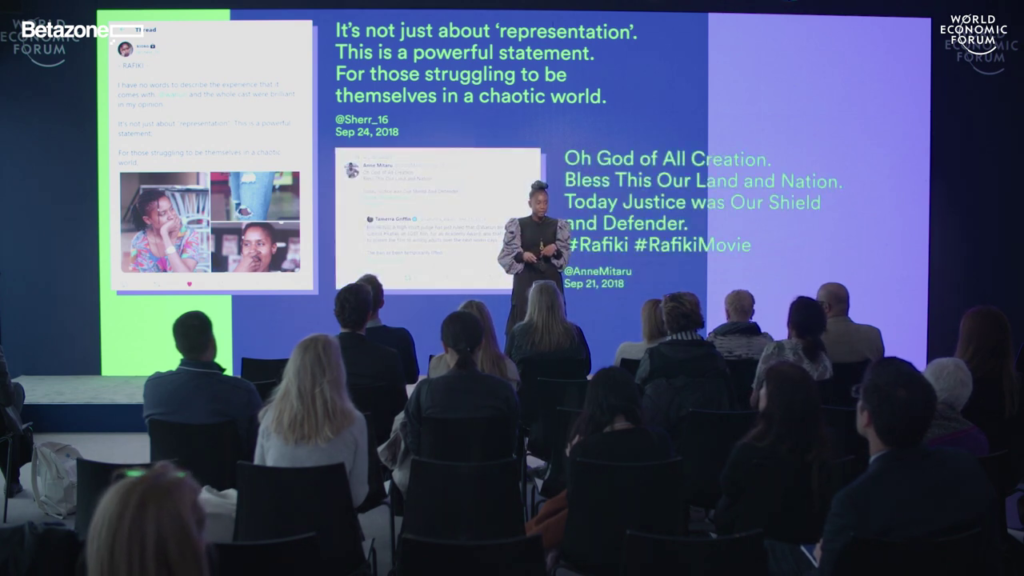 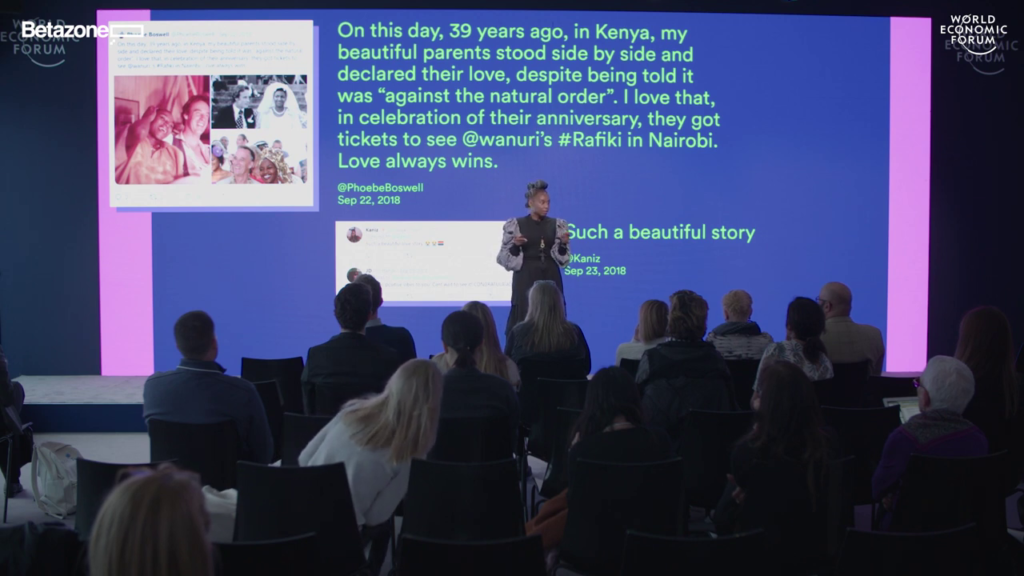 So when we speak about free­dom of expres­sion, and when we think about the work that we do as artists, one of the things that con­tin­ues to remain in my head is a line from the poet Lucille Clifton. And she asks, What have you trav­eled towards more than your own safe­ty?

Now, there’s artists across Africa, Stella Nyanzi for one, Ngũgĩ wa Thiong’o who remains in exile, there’s artists across Africa who chal­lenge this idea of cen­sor­ship. Who work hard to make sure that you get the art that you deserve. But they only do it with your sup­port. They only do it because they know that they have a will­ing audi­ence who will lis­ten, who will pay attention.

So there’s dif­fer­ent types of sub­tle cen­sor­ship that con­tin­ue to exist. So while we artists con­tin­ue to do our part by cre­at­ing, I chal­lenge you not only to trav­el towards more than your own safe­ty. But I chal­lenge you to buy a tick­et. To go out and watch work of peo­ple that you want to see. If there is a female direc­tor, and you want to see more female-directed films, buy a tick­et. Do it for the data. Because this is the data that con­tin­ues to feed the indus­tries that allows us to con­tin­ue to make work.

I’m not say­ing you have to see the film. I’m just say­ing you have to buy the tick­et. [audi­ence laughs] So do it for the data. And do it for us, because we are doing our part. But I chal­lenge you to think what are you doing? What is your part towards the cause of free­dom of expres­sion? Thank you so much.