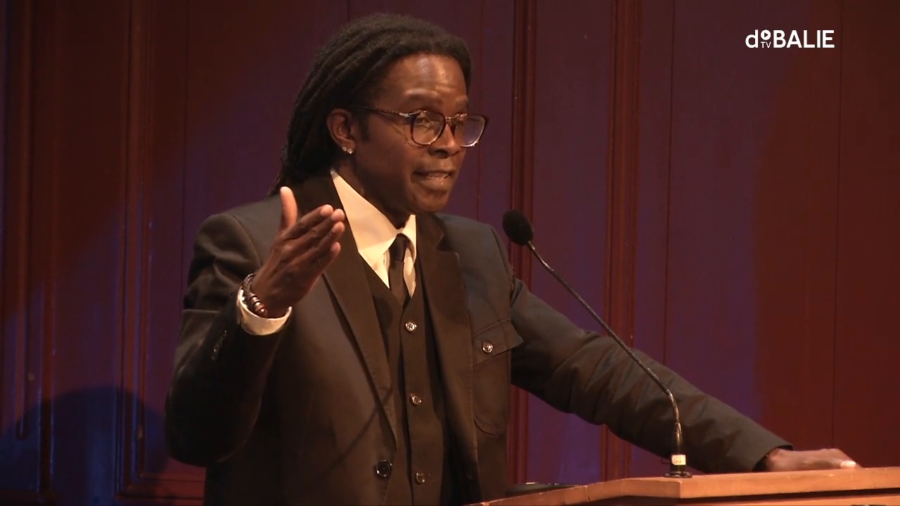 Emily Rhodes: Good evening every­one. Good evening and wel­come to IDFA at De Balie. Thank you for com­ing out. The weath­er is hor­ri­ble, I know, and I’m real­ly glad that we’re all here in such a full room. Very pleased to see you all here. And a warm wel­come also to those watch­ing our livestream at home.

My name’s Emily Rhodes. I’m a pro­gram edi­tor here at De Balie cin­e­ma, where we show beau­ti­ful doc­u­men­taries and orga­nize spe­cial screen­ings all year round, not just dur­ing IDFA. There’s been a long-standing col­lab­o­ra­tion between De Balie and IDFA, and this year De Balie has teamed up with IDFA to bring you a series of nine doc talks over the course of nine days. And to see the rest of our pro­gram at De Balie please vis­it our web site.

Tonight we’ll be watch­ing You Think the Earth is a Dead Thing, direct­ed by Florence Lazar. And when I try to explain this film to oth­er peo­ple I end up talk­ing for ages because this film, what it tells us and I think it tells us it in such a beau­ti­ful way…it’s not that self-evident to the aver­age view­er who has­n’t seen it yet. There are so many threads in this film that are woven togeth­er and it’s real­ly hard to dis­en­tan­gle them.

Sadly the direc­tor, Florence Lazar, was­n’t able to make it to tonight’s screen­ing to tell us more about this film. But I’m very pleased to announce that we do have a spe­cial guest here with us tonight who’s Dr. Francio Guadaloupe, who will kind­ly pro­vide us with an intro­duc­tion on the con­text in which he places this film as a schol­ar. He’s a cul­tur­al and social anthro­pol­o­gist, and he spe­cial­izes in decolo­nial and Caribbean thought among oth­er things. He works as a researcher and teacher at the University of Amsterdam. and for­mer­ly he was the pres­i­dent of the University of St. Martin on the island of Saint Martin, not too far from Martinique, where the film that we’ll be watch­ing tonight was made.

And after his intro­duc­tion, which will be approx­i­mate­ly ten or fif­teen min­utes, there’ll be room for a cou­ple of ques­tions from our audi­ence. So please feel free to ask them. I’ll come to you with a micro­phone, and please make sure to speak into the micro­phone so that the view­ers at home can hear what you’re say­ing through the livestream as well.

After that we’ll be watch­ing the film togeth­er, and then we can fur­ther dis­cuss over drinks at the bar. I think Francio would be very hap­py to talk to you about the film in fur­ther detail. Without fur­ther ado, please help me give a warm wel­come to talk Dr. Francio Guadaloupe.

Francio Guadaloupe: Good evening. Let me first thank Emily and De Balie and IDFA for invit­ing me to intro­duce this film. Secondly, I know that the main rea­son you’re here is to see the film, to watch the film. So I thank you for the ten min­utes of atten­tion so I can offer a sup­ple­ment to the film so that you can place the film a bit better. 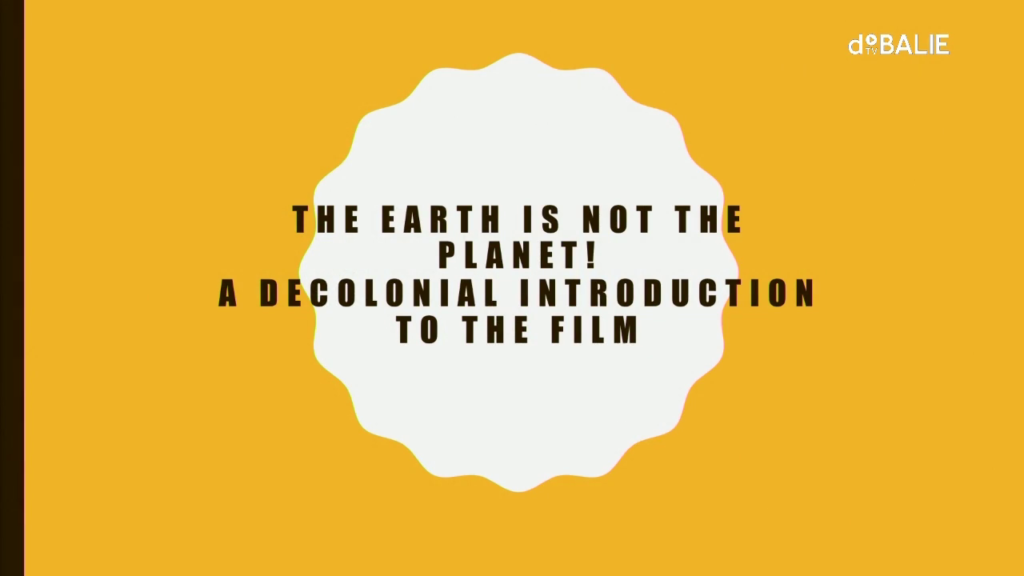 My talk in a nutshell:

Now, this is what I think the film is about. The Earth is not the plan­et. Whilst I watched the film a cou­ple of days ago, I jot­ted this down and I put it, as all anthropologists—or many anthro­pol­o­gists nowa­days do, on my Facebook page. And it’s a lot of jar­gon, but in a nut­shell what I’m try­ing to say is that when you look at this film you will rec­og­nize that it’s part of a tra­di­tion that says we have to think the plan­et, and we have to stop think­ing the Earth. Thinking the Earth is actu­al­ly think­ing the world in terms of dis­tinct civ­i­liza­tions, in terms of con­ti­nents, in terms of own­er­ship. Who owns cul­ture, who owns land, and how they exploit land and cul­ture and so forth.

Planet think­ing, which is dif­fer­ent, is say­ing we share the globe togeth­er. We can’t ful­ly de-link from one anoth­er. So we will have to find a way of shar­ing the Earth togeth­er with the rest of life that exists on the Earth. And that life is min­er­al life, it is mate­r­i­al life, it is plant life, it is oth­er kinds of ani­mal life besides human beings. 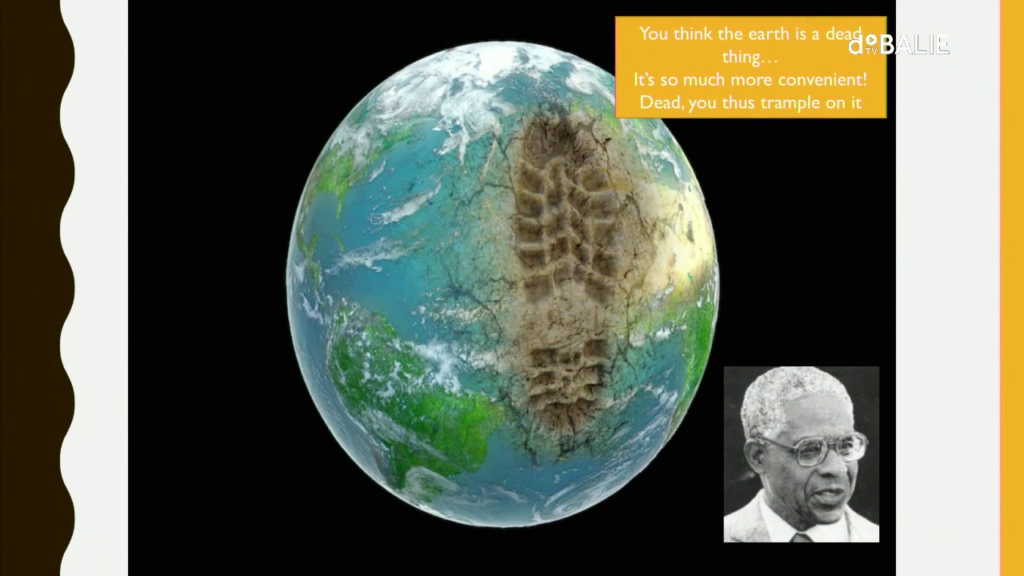 Now, I think the film is about this, and I think the film is about the Anthropocene under­stood in a par­tic­u­lar way. The title of the film is tak­en from a dra­ma of the Martiniquan thinker and for­mer may­or of the island, Aimé Césaire, known for négri­tude, but also known for his poems in which he is actu­al­ly say­ing you can treat the world as the Earth, and then if you treat it as a dead thing, then you can just exploit it as much as you want. It’s a con­ve­nient way of look­ing at life in which we actually—the life that we inhab­it. And the film­mak­er actu­al­ly took Aimé Césaire’s the­ater piece of The Tempest, which is a rework­ing of Shakespeare, to actu­al­ly do this film.

Because there two ways of look­ing at the Anthropocene. One way’s the dom­i­nant dis­course of the Earth, and the oth­er way is a demot­ic dis­course of the plan­et. Are you still… Am I being clear? Alright. Perfect. 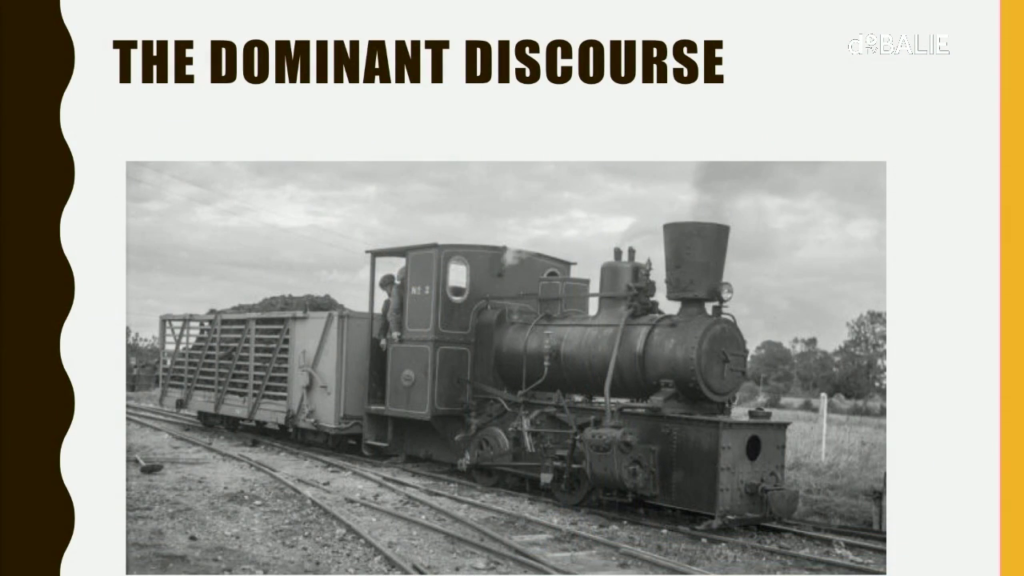 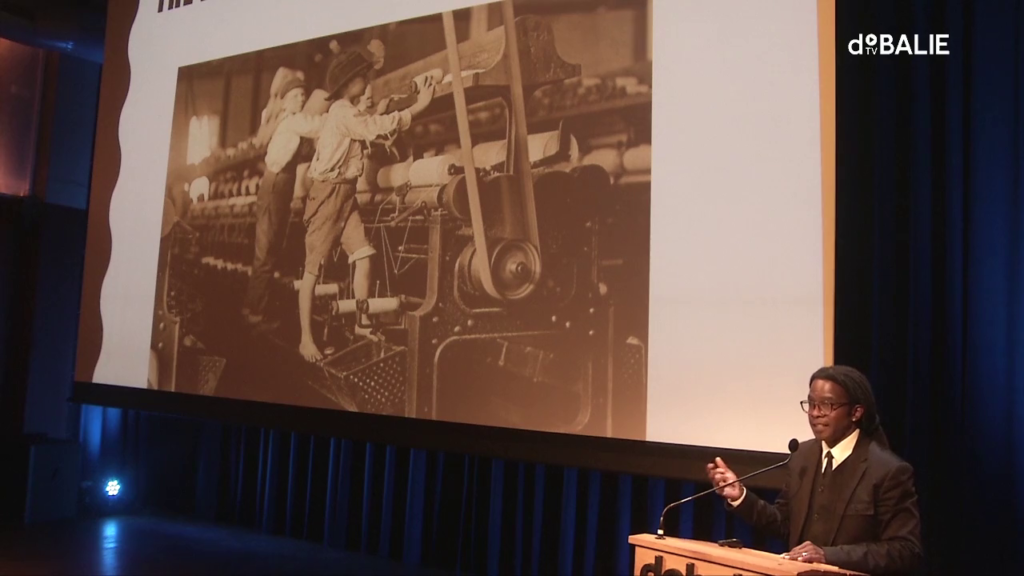 It says that in the Industrial Revolution, which start­ed in the North Atlantic (England, France, the United States, Germany), it says that whilst this was tak­ing place there was a lot of exploita­tion. There was child labor, peo­ple were liv­ing in inhu­mane con­di­tions. And slow­ly, through trade unions and through revolts, this began to change. But you can’t think the Industrial Revolution with­out think­ing the exploita­tion of the major­i­ty of the pop­u­la­tion in the North Atlantic. 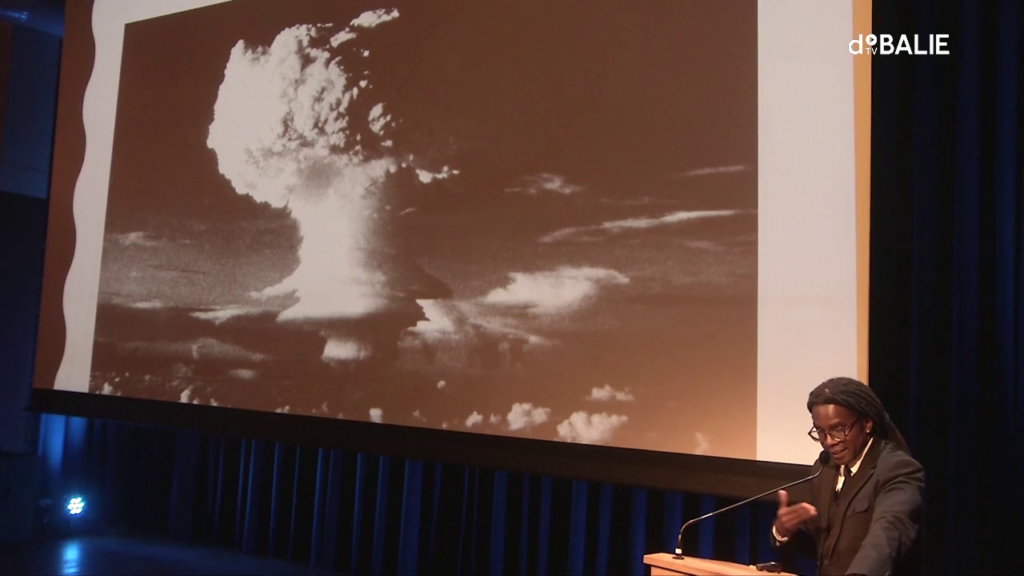 The argu­ment then con­tin­ues with­in the dom­i­nant dis­course to say even though there was an eman­ci­pa­tion of the work­ers and of the pop­u­la­tion, after a while the Pandora box was such that it led to more devel­op­ments, and it led to a sit­u­a­tion in which now we can actu­al­ly destroy the Earth, after the atom­ic bomb. So it places the Anthropocene in that longer trajectory. 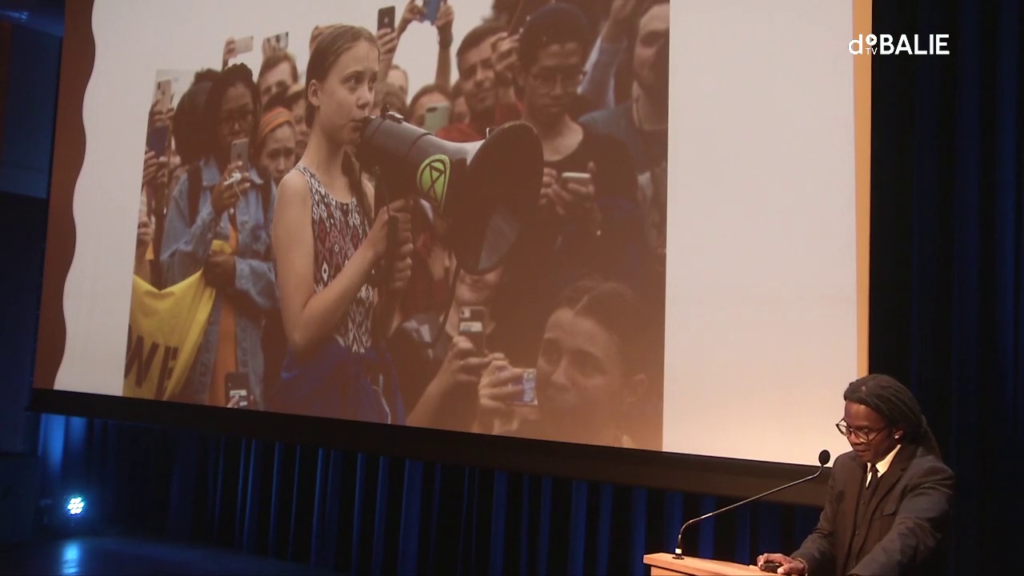 It also says slow­ly we are com­ing to an aware­ness of this—and you see that geo­sci­en­tists, but also activists—and the lat­est sym­bol is Greta Thunberg—slowly we are begin­ning to under­stand that we have to change our ways. This is the dom­i­nant dis­course of the Anthropocene. It’s a dis­course I think many of you are famil­iar with. 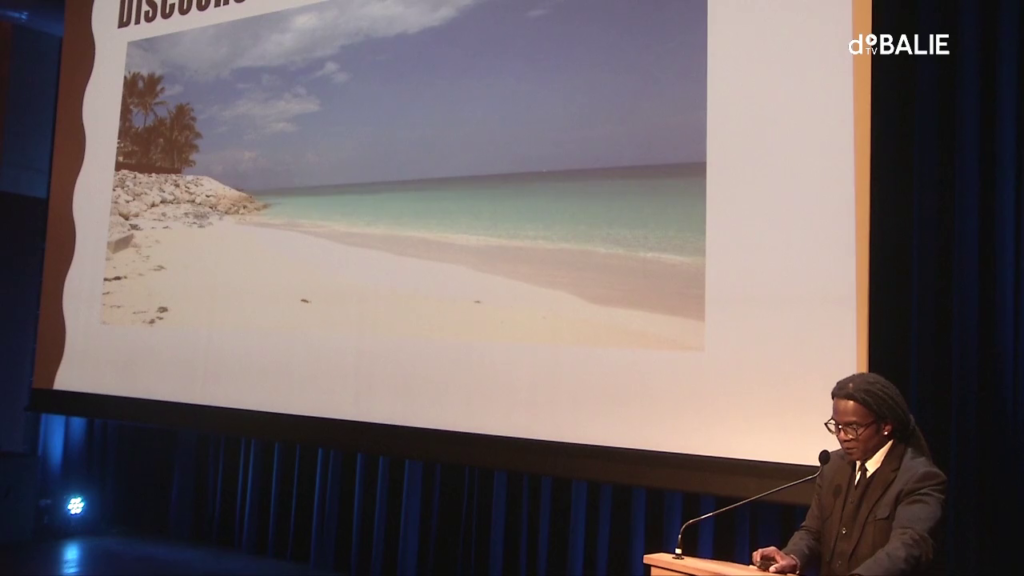 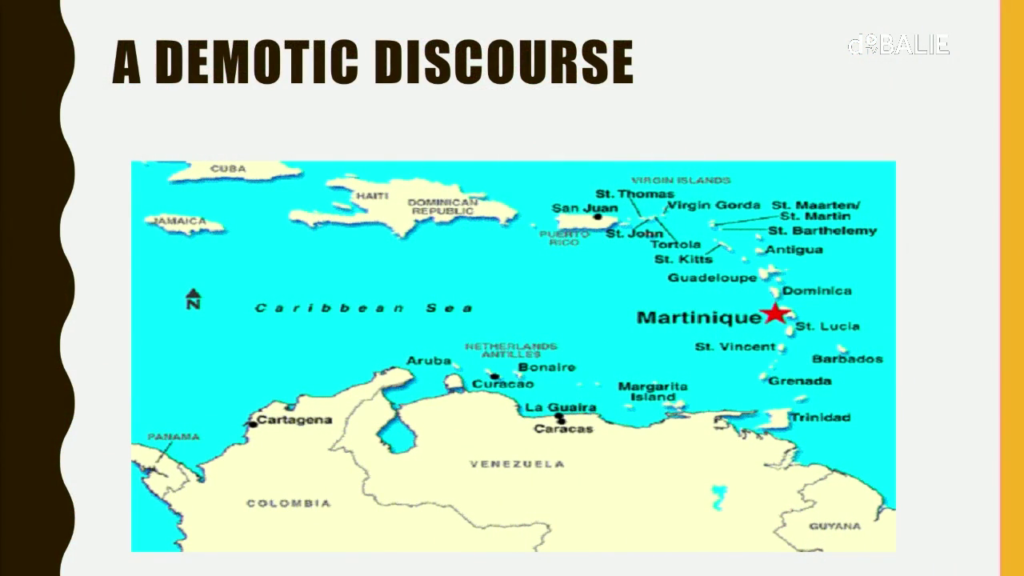 Settler colonies are the colonies like Australia, the USA, South Africa. These are colonies where per­sons from Europe came and they set­tled these places, and they devel­oped it in a cer­tain way. Managerial colonies are colonies that had few Europeans, but had peo­ple com­ing from oth­er parts of the globe—in the Caribbean it was pri­mar­i­ly peo­ple from sub-Saharan Africa and peo­ple from India and China—coming, and these colonies were man­aged, they were man­aged sole­ly for prof­it. These are dif­fer­ent kinds of ponies. Then of course you have the colonies of the mis­sions. These are colonies that were con­trolled by the church­es. And you have a pol­i­tics of indige­nous­ness which is the pol­i­tics of indige­nous peo­ple fight­ing for their rights. 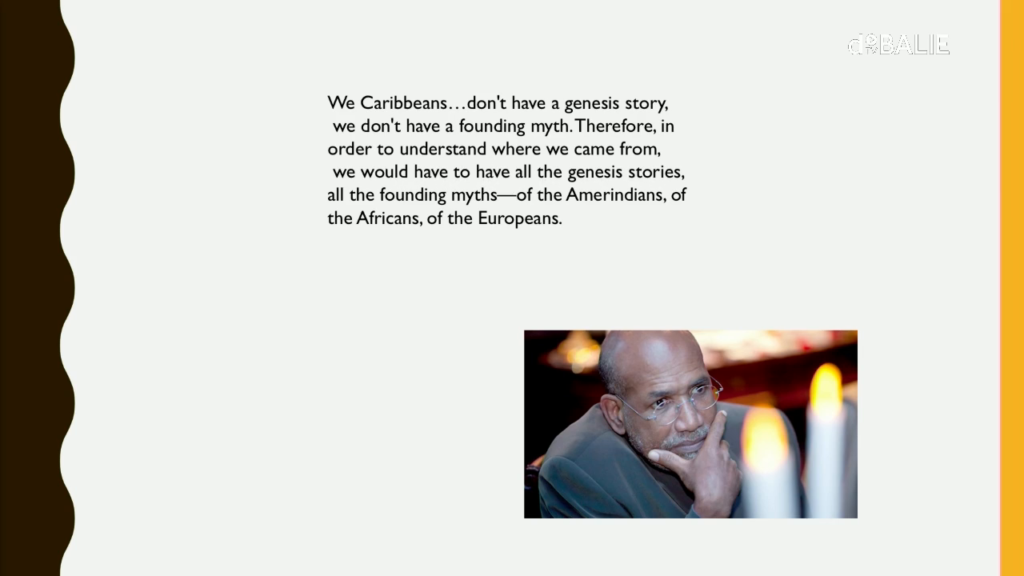 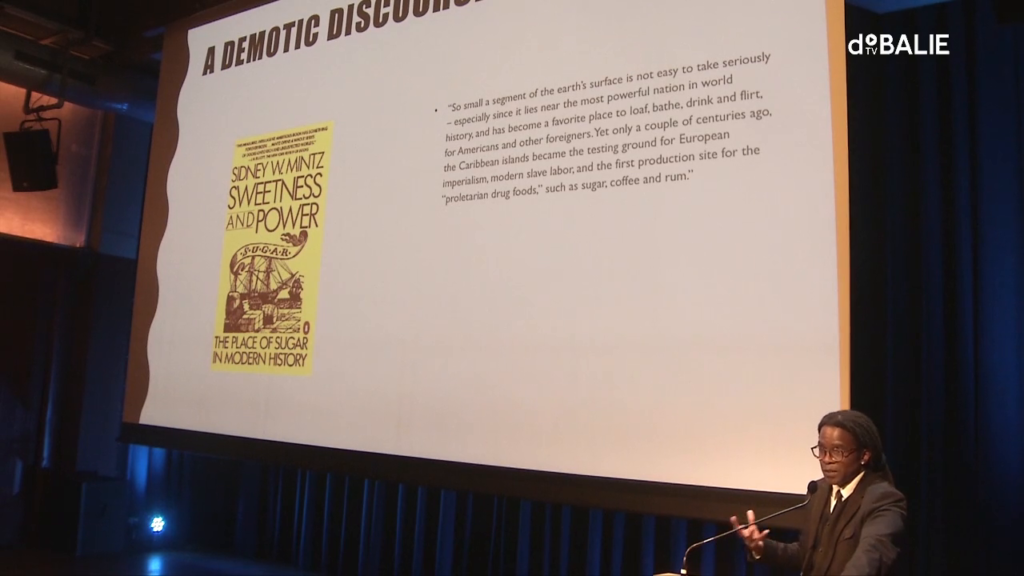 One of the things that then emerges—you take Sidney Mintz, a fel­low anthropologist—is he says if you look at the European Industrial Revolution you have to ask your­self what did the work­ers eat? What did they con­sume? Where did the cot­ton come from? And he says the cot­ton came from the plan­ta­tions. The sug­ar, which we eat all these pas­tries, it was pro­duced in the Caribbean. That gave the work­ers the calo­ries to be able to be fur­ther exploit­ed, and to sur­vive. So from this per­spec­tive you can’t under­stand indus­tri­al­iza­tion with­out under­stand­ing that it was glob­al. The fac­to­ries in England, and those in Germany, were con­nect­ed to the plan­ta­tions and the fac­to­ries in the Caribbean. 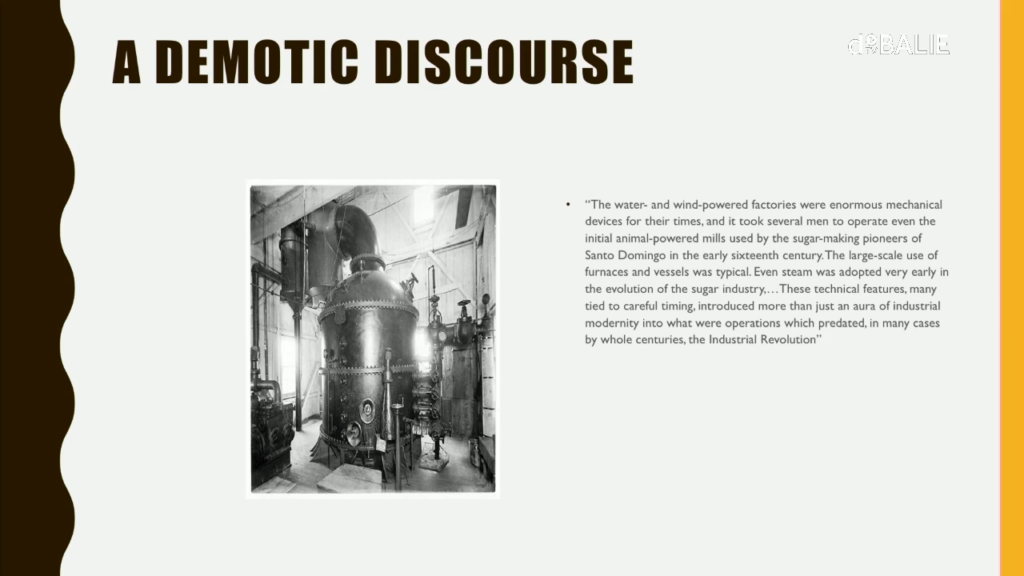 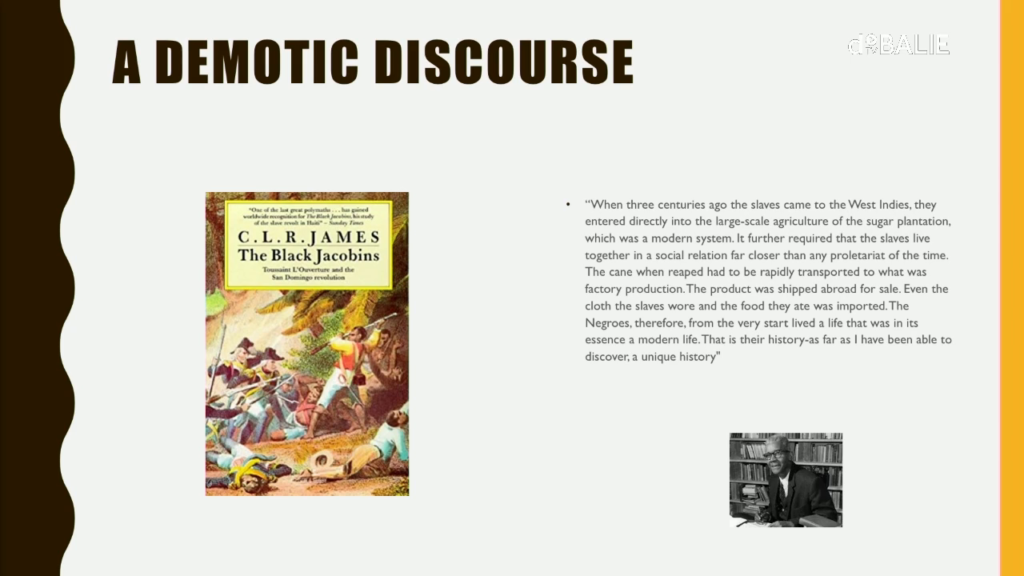 Now, he’s build­ing on the work of Caribbean per­sons that werewrit­ing about this already in the 1940s. One of them is CLR James, who said if you take plan­ta­tion slav­ery you have to rec­og­nize that it was an ear­ly form of glob­al­iza­tion. The cloth­ing that the enslaved wore was pro­duced else­where. The food that they ate was pro­duced else­where. They were already in an extreme­ly glob­al­ized world that was part of their life, so they lived moder­ni­ty ear­li­er than moder­ni­ty hap­pened in oth­er parts of the globe. 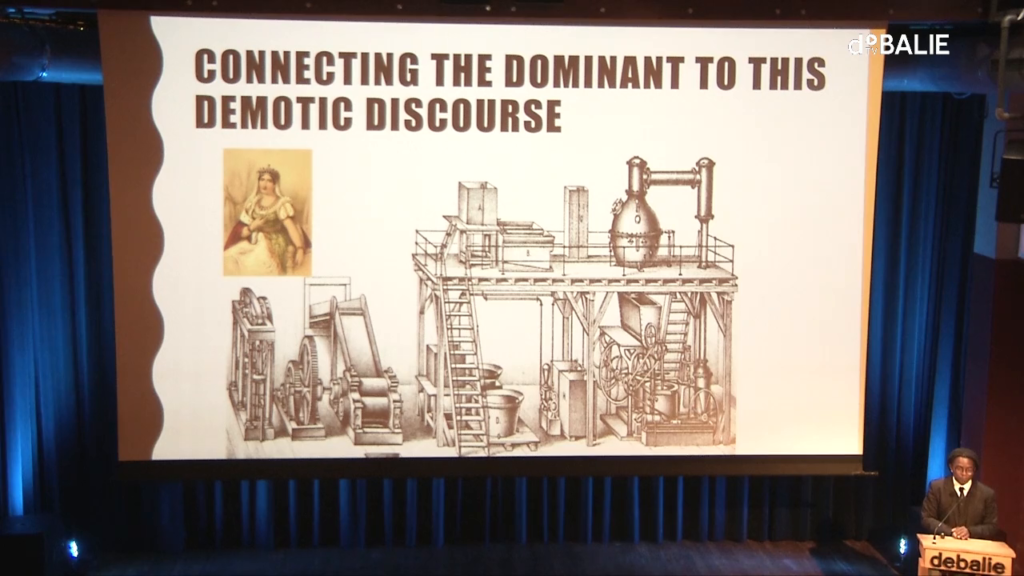 So what does that mean. It means—and I’m com­ing to the end. It means that you have to under­stand the plan­ta­tions in the Caribbean as unit­ing the field and the fac­to­ry. These were two things. The field and the fac­to­ry were unit­ed in the Caribbean, and those fac­to­ries there were con­nect­ed to fac­to­ries in the North Atlantic, and the prod­ucts that were com­ing and the peo­ple that were com­ing were con­nect­ed to the larg­er globe.

It also means that you can’t under­stand the major play­ers in Europe if you don’t under­stand that some of them were from the Caribbean. The per­son there in the right cor­ner is Joséphine Bonaparte. She was born in Martinique. She’s the wife of Napoleon. This coun­try here had a king for a while, the broth­er of Bonaparte. His wife was also from Martinique. So what you notice is glob­al cap­i­tal from those plan­ta­tion cre­oles was trans­form­ing the world. And par­tial­ly the cre­oles became part of the roy­al­ty that we know nowa­days in Europe. This is a way of think­ing the globe.

So, what I would like you to do as you watch this film is to rec­og­nize that the his­to­ry that you are being pre­sent­ed is not the his­to­ry of the Caribbean. It is our unac­knowl­edged his­to­ry. It is the his­to­ry of the plan­et. And per­haps if we start to under­stand this more cor­rect­ly we will under­stand that the plan­ta­tion, slav­ery and plan­ta­tion inden­ture­ship, led to defor­esta­tion. Those boats and those steam engines had to…they need­ed fuel. It led to a deple­tion of the soil. It led to the ash­es com­ing down—the Caribbean expe­ri­enced that already in the 18th cen­tu­ry. All these things hap­pened due to that larg­er colo­nial process. So the Anthropocene is old, and per­haps we have to think of the Anthropocene—as some geo­sci­en­tists do—saying that it actu­al­ly took off around the 1600s and it took off in the Empire. And it affect­ed us all, and nowa­days we have to find a com­mon solu­tion to a com­mon prob­lem. Thank you.

Rhodes: Thank you very much for that intro­duc­tion. I think that was very infor­ma­tive. Are there any ques­tions from our audience?

[inaudi­ble com­ment from the audience]

Ah. This is some­thing we fore­saw. But we will watch the film, and there will be oppor­tu­ni­ty to ask you ques­tions to Francio after watch­ing it. And I think you will need to see the film to ful­ly grasp the whole sto­ry. But we want­ed to give you an oppor­tu­ni­ty to ask them if there are any right now. Ah, yes.

Audience 1: I have a very fun­da­men­tal ques­tion. What does demot­ic mean? And what do you mean by it in your con­text, as well.

Guadaloupe: Demotic means…after Demos, those that are not rul­ing. [crosstalk] That’s what it means.

Audience 1: Ah. Okay. Okay. That makes a lot of sense.

Rhodes: Any more ques­tions? No. Okay. Then I think we’ll just have to leave it for after the film. Thank you very much Francio. We’ll speak to you after­wards. And enjoy the film, everyone.