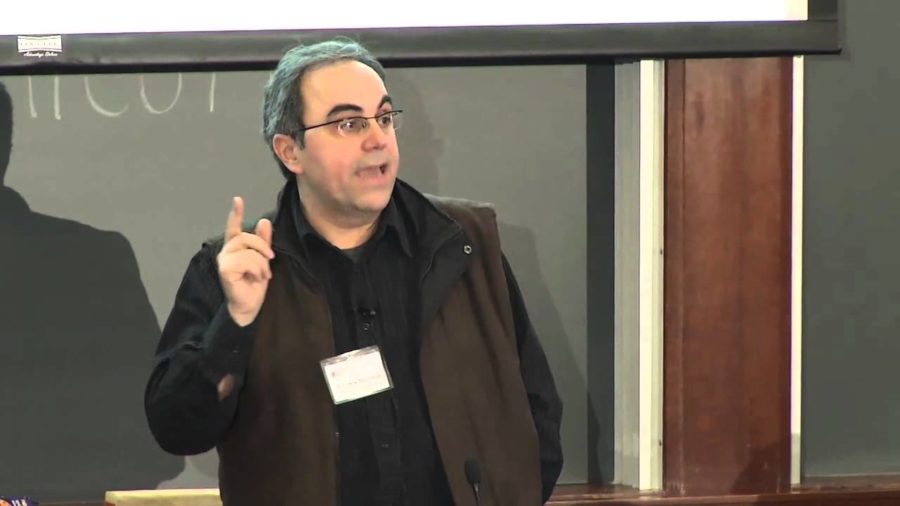 Interventions for Individuals to Fight Spin

Christian Sandvig: Next up we have on Panagiotis ​“Takis” Metaxas. I don’t know how I did there with my Greek. He is a pro­fes­sor of com­put­er sci­ence at Wellesley, and a vis­it­ing schol­ar at the Center for Research on Computation and Society. And his area of research is about mis­in­for­ma­tion prop­a­ga­tion and elec­toral pre­dic­tions. So, I actu­al­ly was read­ing about him and I saw that he said that he loves social media in the Wellesley newslet­ter. He says he loves using social media, but Facebook is unin­ter­est­ing chitter-chatter. So only Twitter.

Metaxas: And as a mat­ter of fact, I give a lot of— I don’t want to sound like an adver­tise­ment for Twitter. But Twitter’s play­ing the role of my col­lec­tion of edi­tors. Instead of going around like crazy try­ing to be informed about the impor­tant things, I have select­ed care­ful­ly the peo­ple that I want to be informed from, and I fol­low their tweets. So if you think you have some­thing to tell me, you send me an email and you’ll tell me.

So, I did some­thing crazy so let’s see how it works. Given the inter­est of the morn­ing dis­cus­sion, I tried to change my talk so that it feeds into the form of where the dis­cus­sion is going. I was going to tell you a lot about how Web spam­mers and pro­pa­gan­dists have a lot of thing in com­mon. And I would have told you a lit­tle bit about how the fear of pro­pa­gan­da can help you detect pro­pa­gan­da as well. 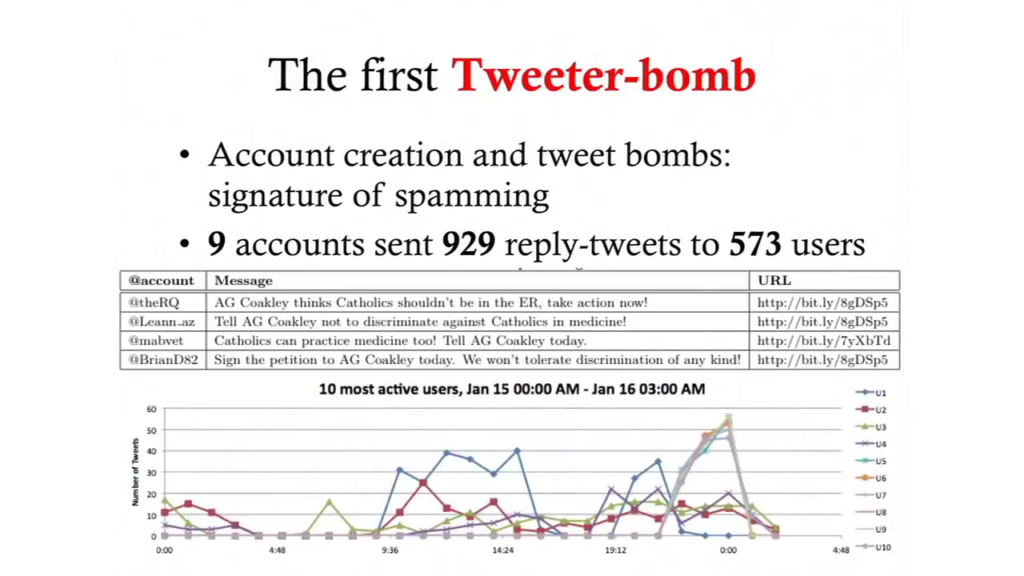 Graphs from Panagiotis Takis Metaxas and Eni Mustafaraj, From Obscurity to Prominence in Minutes: Political Speech and Real-Time Search, 2010

But I’ll skip and I will tell to you a few things about the first Twitter bomb that with my col­league we found a cou­ple years ago. And there it was a case in which some­body was attack­ing the can­di­date Martha Coakley in the last Massachusetts elec­tions. And I’m acknowl­edg­ing Eni Mustafaraj who’s sit­ting back there. We found out that actu­al­ly it was easy to detect this kind of attack. 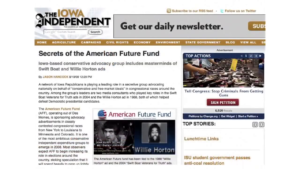 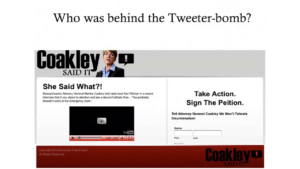 This is where they where try­ing to send their peo­ple. And the mes­sage was signed by the American Future Fund. We had no idea who was behind these attacks. Turns out it was the same may­oral run Republicans who were also behind the attack on Kerry. So pret­ty inter­est­ing sto­ry when we found. And as Fil said, it would be nice if we had found it a lit­tle ear­li­er, not like maybe weeks lat­er, after the elec­tions were done. But of course if you want your attack to be effec­tive, you’d bet­ter launch it just before the elec­tions. Elections are awful­ly impor­tant and you can not let them down. That led us into the cur­rent project that I’ll tell you about. 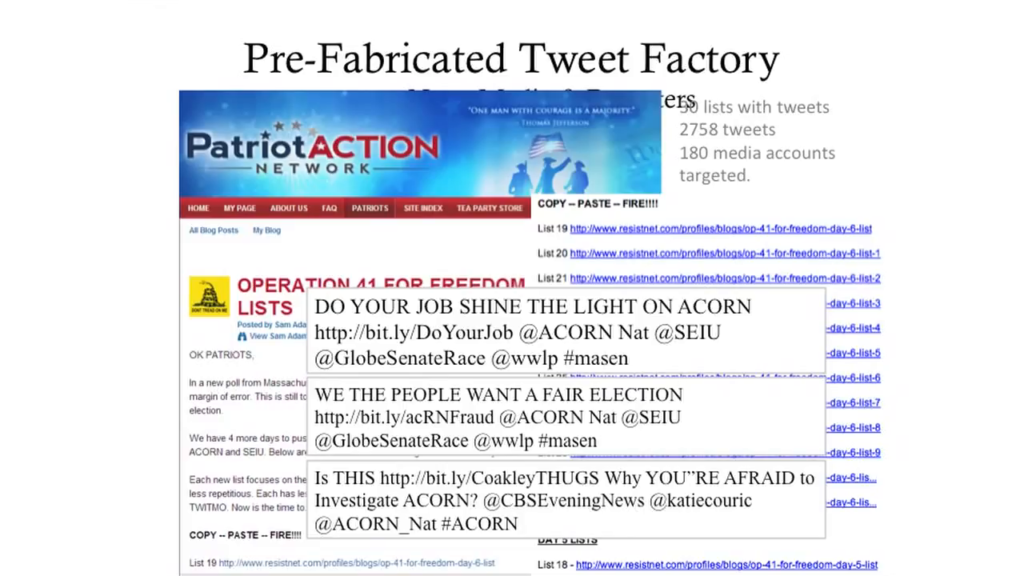 The oth­er thing that we found also was anoth­er pre­fab­ri­cat­ed tweet fac­to­ry. So if you want­ed to sup­port your cause by attack­ing par­tic­u­lar reporters, you would go to this site, you would find a col­lec­tion of tweets and then all you would have to do would be to copy and paste, copy and paste, fire. And instead of try­ing to tell the gen­er­al pub­lic about that, you were going to tell about par­tic­u­lar news reporters, news orga­ni­za­tions, about your mes­sage, and you would ride in the Massachusetts sen­a­to­r­i­al race as a way of get­ting the mes­sage out.

So, I will close this paren­the­sis because I want to tell you a lit­tle more about what we’re doing now. The dis­cus­sion of this ses­sion has to do a lot with try­ing to cre­ate tools for indi­vid­u­als. And here is some­thing that I know that peo­ple from Ushahidi are doing, so I had a lit­tle dis­cus­sion with Patrick before about that. 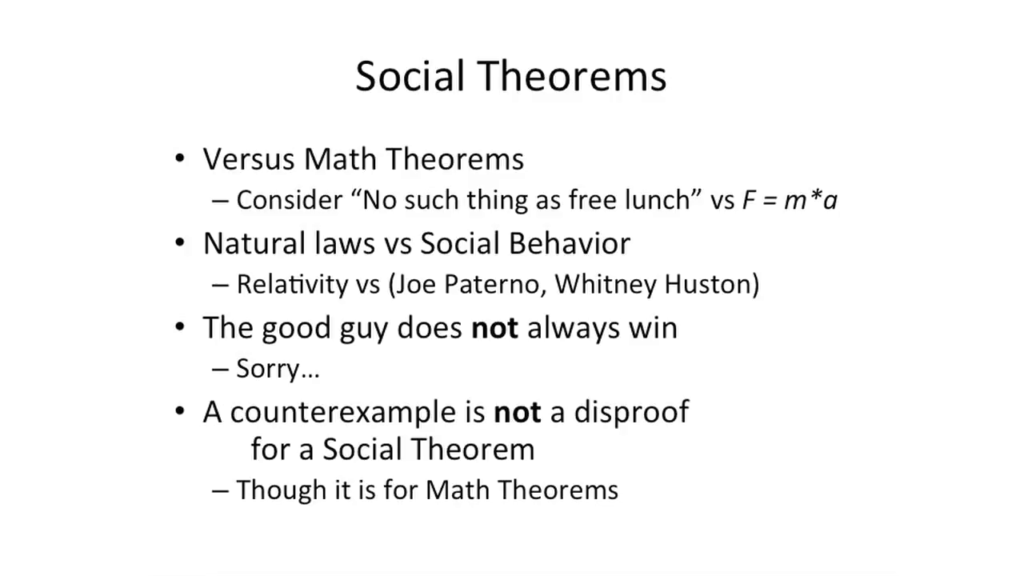 What do I care about? Have you ever heard of social the­o­rems. I hope not. Because I just thought of this term as a way of mak­ing a point. What’s the point? We treat our knowl­edge, what we…you know, try to believe as fact; we treat them as the­o­rems the same way that we are look­ing to math­e­mat­i­cal the­o­rems to make sense of the world around us. But the prob­lem is they are not the same.

There is a big dif­fer­ence between the real the­o­rems and the social the­o­rems. You know, social the­o­rems are things like ​“There is no such thing as a free lunch.” Which you might con­sid­er to be true except you know, if you are a grad­u­ate stu­dent in a uni­ver­si­ty and you will find lots of free lunch after every talk, right? But in gen­er­al, it is rough­ly the case. Just not always. And com­pare it with F = m*a, which is some­thing that no mat­ter what, it will work, as long as you are in this universe.

We con­fuse nat­ur­al laws with social behav­ior. So, we would love soci­ety to behave the same way as nature, but it does­n’t. For exam­ple, nature will not care if you did anoth­er exper­i­ment before, and it will not change its behav­ior the sec­ond time you do an exper­i­ment. Society will do that. And that’s a prob­lem when you try to find exact­ly the same behav­ior time and again. Here I have the Joe Paterno and Whitney Houston deaths. The first one was a fum­ble. The sec­ond one you know, the news orga­ni­za­tions were very care­ful not to repeat it so they were kind of slow­er as they were going.

Another bad thing that my moth­er used to tell me all the time, it’s the good guy does not always win. I’m sor­ry. But this does­n’t mean that you do not have to try every time to get the good things out.

Finally, just because you found a coun­terex­am­ple in a social the­o­rem, it does not mean that the social the­o­rem is wrong. Just because some of the things that soci­ety behaves like do not always work does not mean that we know noth­ing about soci­ety. We still know some­thing about soci­ety. And we saw some of this ear­li­er, for exam­ple Brendan Nyhan talked a lit­tle bit about best prac­tices, cred­i­ble sources, how to make more sense about all of these things. 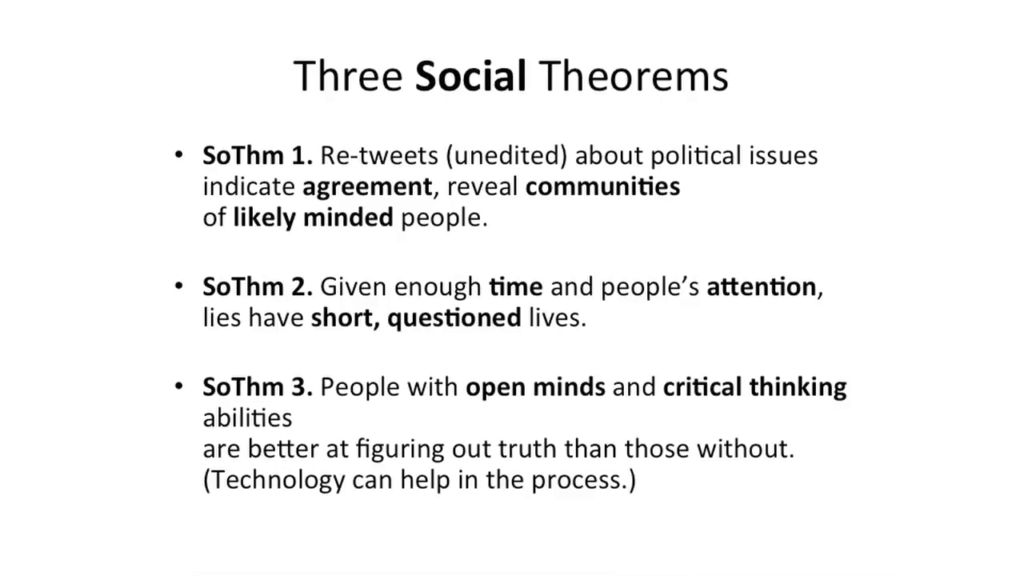 So, what are social the­o­rems that I want to tell you about, are things that we have dis­cov­ered in the last five years—some of them—and what we hope is to put them into a per­son­al tool that will help you make more sense as you’re receiv­ing infor­ma­tion. We’ll deliv­er your infor­ma­tion with a lit­tle bit of trust val­ue, and we’ll tell you whether you should be trust­ing this piece of infor­ma­tion as it’s com­ing to you, and why. So, I’ll give you three of them today and I’ll give you some evi­dence about that.

So, the first one is that unedit­ed retweets about polit­i­cal issues indi­cat­ed agree­ment and reveal com­mu­ni­ties in like-minded peo­ple. It does not mean that every retweet means that kind of thing, but when you have polit­i­cal dis­cus­sion, retweets—verbatim retweets—actually mean that ​“I total­ly agree with this guy.” Always?, not always, and I’ll show you an exam­ple. But most of the time. That’s the first social theorem.

The sec­ond one is that— It’s a very opti­mistic one. Given enough time and enough peo­ple’s atten­tion, lies have short and ques­tioned lives. That’s pret­ty opti­mistic. It does­n’t mean that every time lies will die. No, it does­n’t. If you look in world reli­gions you will see some lies that have prop­a­gat­ed for­ev­er. But there are oth­er cas­es in which in this world we live in actu­al­ly they can be detected.

And the last—which is not real­ly a the­o­rem but you know, what the heck—is that peo­ple with open minds and crit­i­cal think­ing abil­i­ties are bet­ter at fig­ur­ing out truth than those with­out. Sounds like a duh but you know, with the dis­cus­sion we’ve had in the morn­ing it seems like we tend to believe that’s oh, maybe there is noth­ing we can do. But it is not like that. 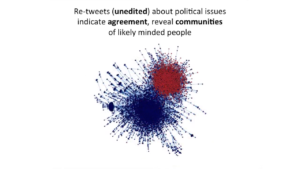 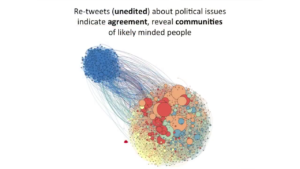 Graph from Panagiotis Takis Metaxas and Eni Mustafaraj, From Obscurity to Prominence in Minutes: Political Speech and Real-Time Search, 2010

So some evi­dence. The first comes from the data we got when we gath­ered the Massachusetts sen­a­to­r­i­al elec­tions. This is the retweet­ing pat­tern of a group of peo­ple that retweet­ed the most. This is about 1,000 peo­ple that retweet­ed about 14,000 times in sev­en days. You can see a way that they were divid­ed, and actu­al­ly they were divid­ed auto­mat­i­cal­ly by an algo­rithm: if you retweet a lot, you get to be clus­tered togeth­er, oth­er­wise you’re far away. The big group, by the way, is not a unified—if you look clos­er they’re indi­vid­ual retweets. There are three dif­fer­ent groups there, some of them engage more with the oth­er group; the oth­ers are not engag­ing at all. The peo­ple from Indiana, Fil, Mike, and Bruno there have found a very sim­i­lar pic­ture for the elec­tions in late 2010. 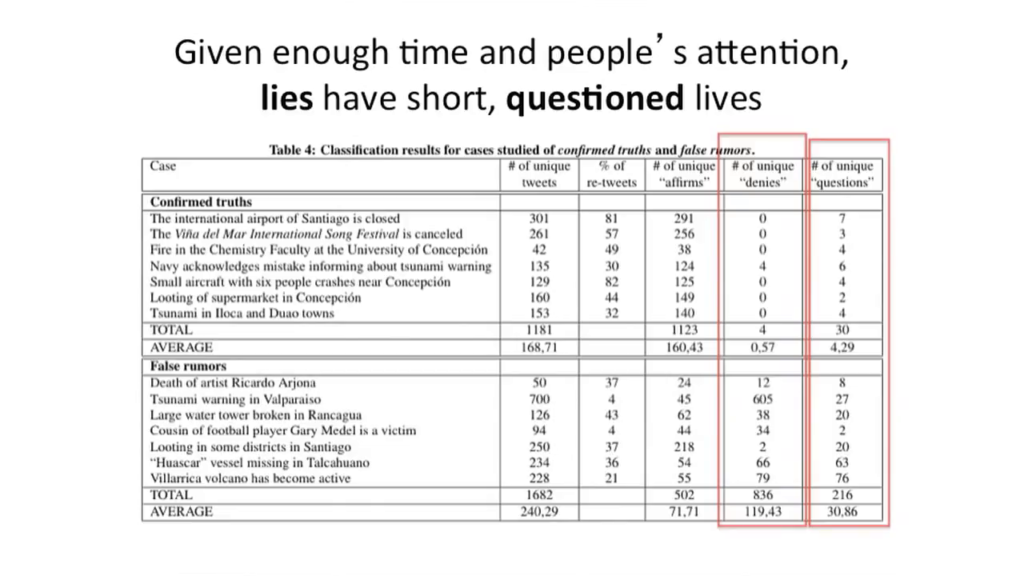 Graph from Marcelo Mendoza, Barbara Poblete, Twitter Under Crisis: Can we trust what we RT?

The sec­ond [the­o­rem] about giv­ing enough peo­ple’s atten­tion. Here is some results of a paper that checked to see how much misinformation—rumors—about a poten­tial tsuna­mi and earth­quakes prob­lem in Chile in 2006, I think it was, prop­a­gat­ed and how far they prop­a­gat­ed. The bot­tom part are the false rumors that were proven false even­tu­al­ly. The top part are the con­firmed truths. These ones were ques­tioned much more often, as you can see, and here is the num­ber of dif­fer­ent ques­tions. It’s not like the truths were not ques­tioned, just not as much by and large. 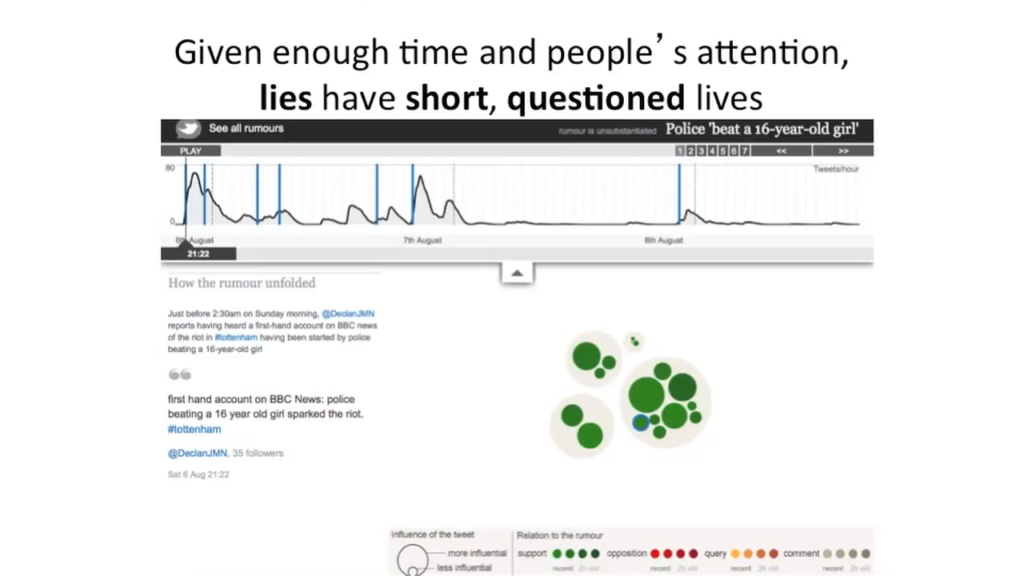 Another very inter­est­ing exam­ple are the London riots rumors that prop­a­gat­ed. The guys at The Guardian have an amaz­ing tool—you should vis­it and play with it. The pics there show some attempts at prop­a­gat­ing false infor­ma­tion even­tu­al­ly died. They tried to revive but they did not live for long. 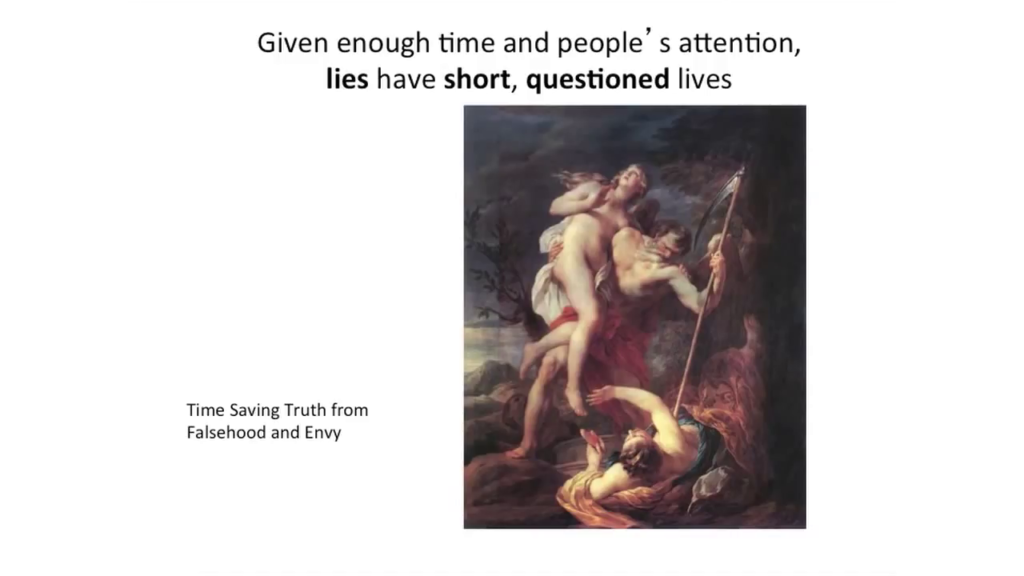 Wisdom from the ages. Here is ​“Time Saving Truth from Falsehood and Envy.” So we’re going along the same ways.

I need to stop, I know, so a lit­tle thing about open minds. The third part, the crit­i­cal think­ing. It’s not that every­body will actu­al­ly be beat­en by every piece of infor­ma­tion. How does it go? You can­not fool all the peo­ple all the time, right? That’s some­thing that hap­pens. You can­not expect you will have a tool that you will just click and will give you the answer. What you real­ly want is to be able to have tech­nol­o­gy that will give that infor­ma­tion, but you will need to fig­ure out the answer using your own brain. So edu­ca­tion is darn impor­tant there. 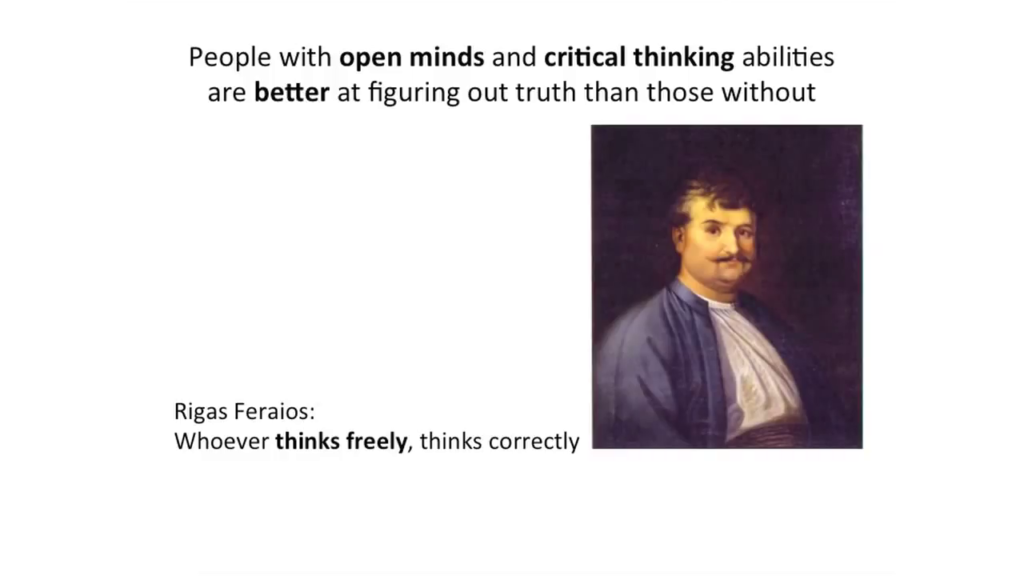 Here is Rigas Feraios, I men­tioned in the morn­ing. And notice that he said who­ev­er thinks freely. You want to be free in your think­ing, but you want to be able to think as well. Thank you.

Misinformation and Propaganda in Cyberspace and Three Social Theorems by Panagiotis Takis Metaxas, and When the News Comes from Political Tweetbots by Eni Mustafaraj, on the Truthiness in Digital Media blog