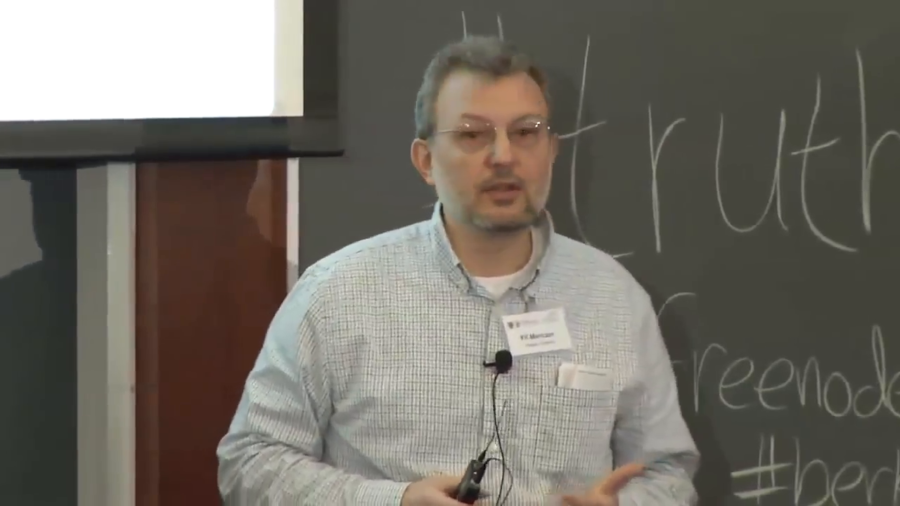 Susan Crawford: Thank goodness Fil Menczer is here, who is a professor of informatics at Indiana University, who has recently been awarded a $2 million grant to build systems that can detect online persuasion campaigns.

Filippo Menczer: Alright, hi. I’m Fil Menczer from Indiana University and I’m here to tell you lit­tle bit about a few exam­ples of truthy memes that we’ve uncov­ered with the sys­tem that we have online. Please go and play with it. It’s truthy​.indi​ana​.edu and Mike Conover and Bruno Gonçalves are sit­ting there, and they’re among the devel­op­ers of this sys­tem. It’s a web site where we track memes com­ing out of Twitter and we try to see if we could spot some sig­na­tures based on the net­works of who retweets what, basi­cal­ly, and who men­tions whom. 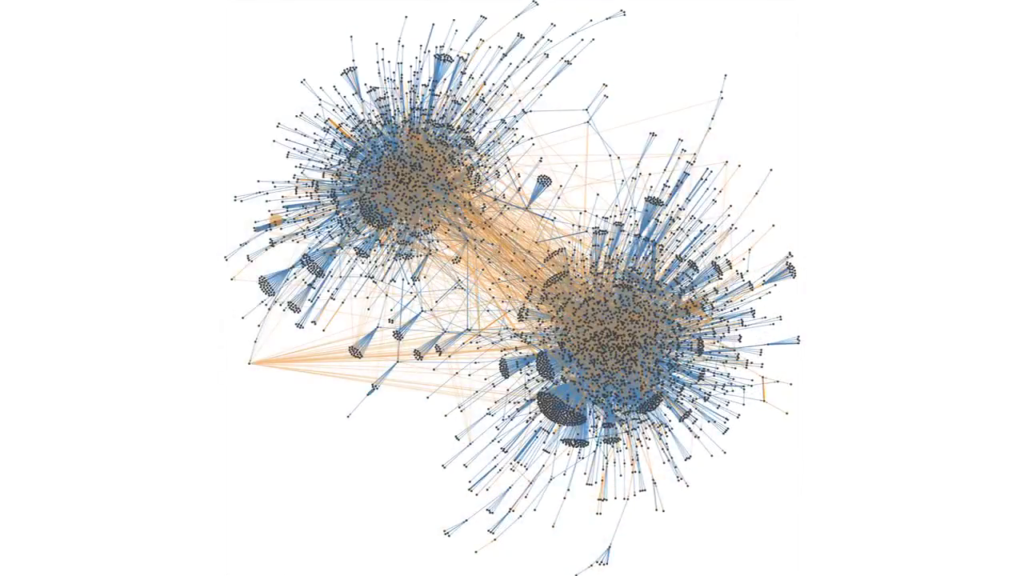 And so you could look at lots of dif­fer­ent memes. For exam­ple, here’s GOP which I want to high­light because it brings up the issue that has been brought up before about echo cham­bers. And in a lot of memes that con­cern pol­i­tics we observed this clear­ly bi-clustered polar­ized struc­ture where peo­ple only tend to retweet oth­er peo­ple that they agree with. So that’s an inter­est­ing thing but that’s not the theme of today. 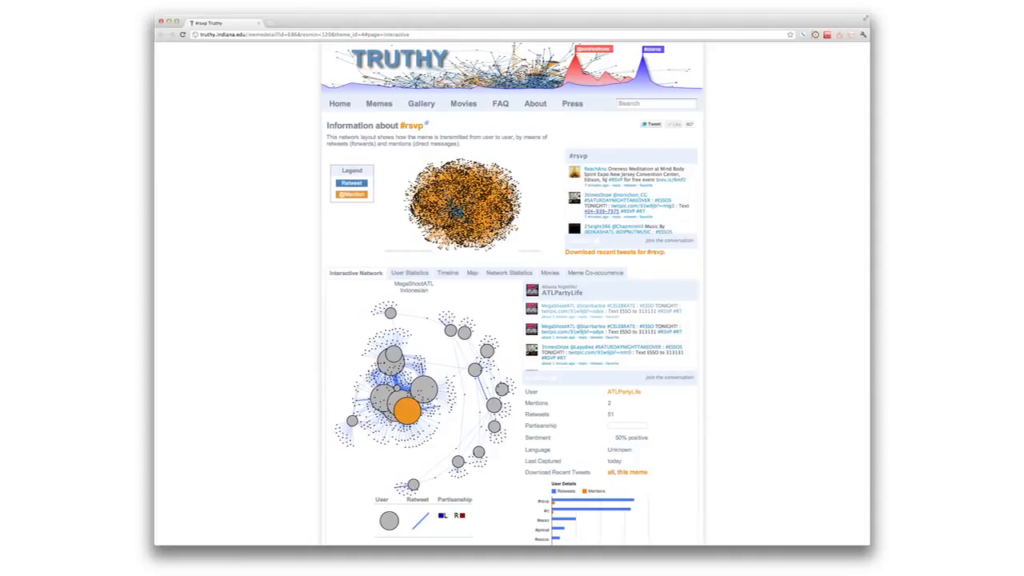 So let me just show you a hand­ful of exam­ples. Here’s one that Mike point­ed out to me. It’s not in the realm of pol­i­tics, prob­a­bly we would put it more in the sort of spam cat­e­go­ry. And it’s just a bunch of accounts that pro­mote a par­tic­u­lar I think club in Atlanta. So the dots are the peo­ple and the oranges are the men­tions. So there’s just a bunch of bot accounts that keep tweet­ing about events and men­tion­ing oth­er peo­ple. And so some of them then even­tu­al­ly retweet and this they use to gen­er­ate buzz about it. So this is one kind of pat­tern that we observed. 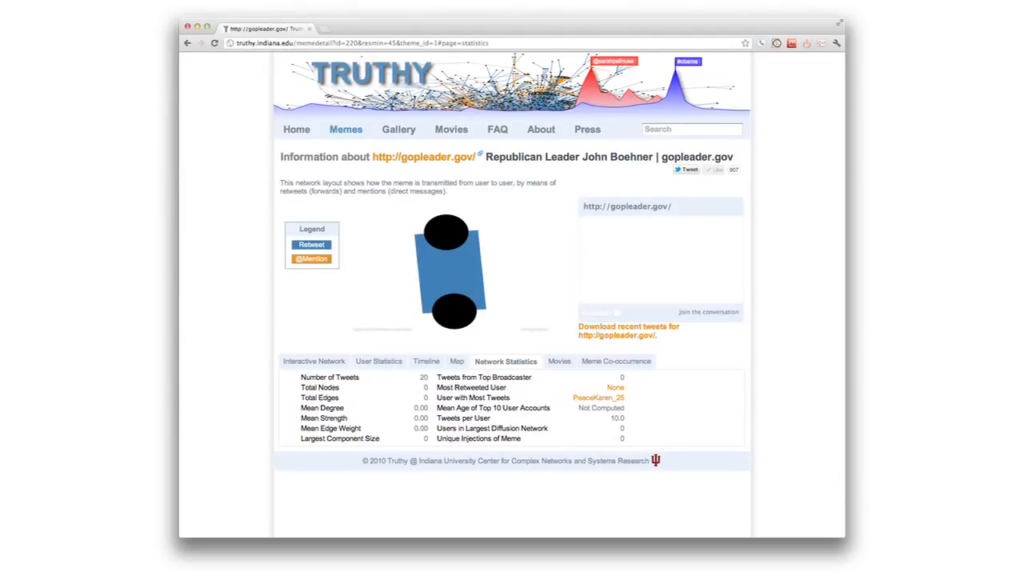 Now let me show you a few pat­terns that we’ve observed in the run-up to the last elec­tion in 2010. Definitely truthy things. So this looks very dif­fer­ent. It’s just two accounts. And a huge edge, that blue thing, is just one very thick edge between these two accounts and that means that these two accounts kept retweet­ing each oth­er. They were bot accounts that gen­er­at­ed tens of thou­sands of tweets, and all of them were pro­mot­ing one par­tic­u­lar can­di­date. And post­ing about this per­son­’s blogs and arti­cles in the press, and webs ite, etc. 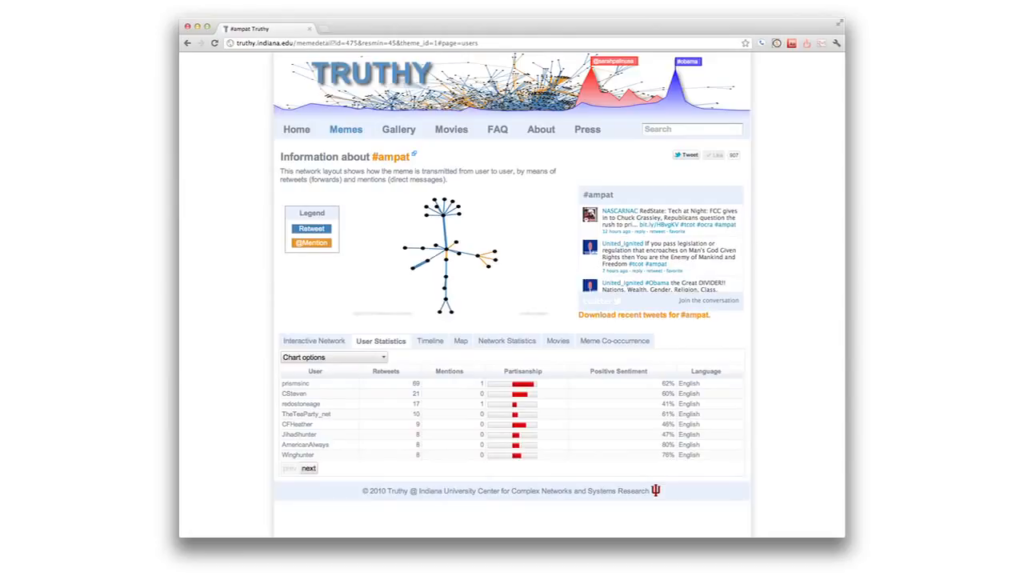 Here’s anoth­er one that is not quite as huge­ly suc­cess­ful but I think is very scary, and it keeps going. It’s #ampat. It’s a tag that is used to post mate­r­i­al that is very scary. You know, very graph­ic movies about behead­ings, and pro­motes the idea that pret­ty much Obama is try­ing to push Sharia law in the United States and things of that sort. So, very inter­est­ing. 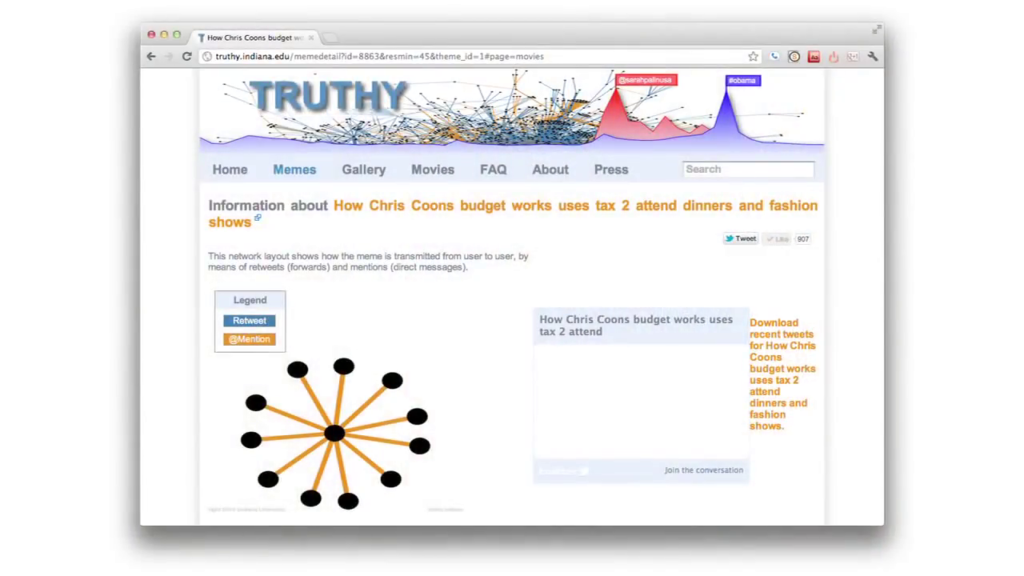 Here’s anoth­er exam­ple. This is a bunch of bot accounts that all turn around this @freedomist account. Freedomist​.com is a web site that posts fake news, and it was extreme­ly active—and still is—in post­ing all sorts of… It tends to be also anoth­er exam­ple of right wing, but we found a few exam­ples of left wing, if you’re inter­est­ed.

But any­way, dur­ing the last elec­tions this was very active in smear­ing cer­tain can­di­dates and pro­mot­ing oth­er can­di­dates. And there was about ten bot accounts, or accounts that were con­trolled by this one per­son, who’s also the per­son who owns and man­ages the web site. And then of course all of them would be retweet­ing. And there was an inter­est­ing pat­tern in which they would all at the same time try to tar­get one influ­en­tial user, hop­ing to get this one per­son then to believe it because it looked like it was com­ing from dif­fer­ent sources. And then if that per­son retweet­ed it then there was a chance of cre­at­ing a cas­cade.

So it was very effec­tive and they got around Twitter’s spam detec­tion by adding ran­dom char­ac­ters at the end of Bitly-shortened URLs so that they looked like dif­fer­ent URLs but in fact they were all point­ing to the same sources. So this was very effec­tive. A reporter actu­al­ly con­tact­ed this guy and he freely admit­ted, said, ​“Yes of course I’m doing it. Everybody’s doing it.” This is a Republican activist in Pennsylvania. And he’s still there. Some of those accounts have been shut down by Twitter but sev­er­al have not. So, still doing it. 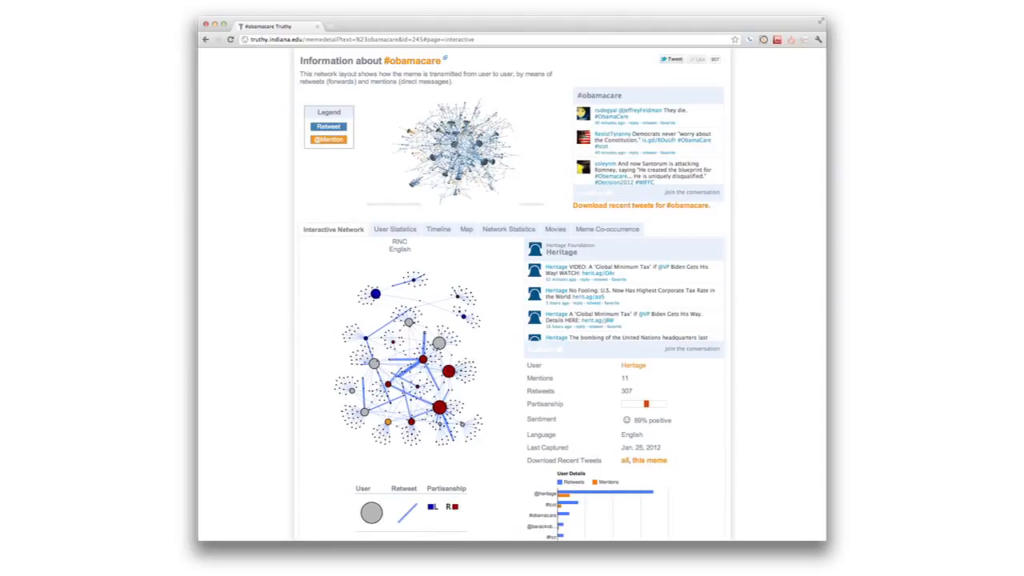 And the last exam­ple is more cur­rent, it’s the hash­tag #oba­macare, which is one of those that are used quite active­ly. And it turns out that… So we have this new tool that we just released. It’s sort of inter­ac­tive visu­al­iza­tion. It’s a lit­tle bit hard to see here because you can’t see all the edges on this mon­i­tor. But basi­cal­ly you can see what are the users who are most influ­en­tial that are retweet­ed the most? And what are the pat­terns of prop­a­ga­tion, and you can sort of explore and dig down and play a lit­tle bit with the data.

That par­tic­u­lar account there that is the most active on the Obamacare meme hap­pens to be the Heritage Foundation. And we have a few addi­tion­al tools that let you see what oth­er memes a par­tic­u­lar account is active pro­mot­ing or dis­cussing. Also we try to auto­mat­i­cal­ly detect lan­guage and do sen­ti­ment analy­sis and a few oth­er things. So you’re wel­come to play with it. But these were just just a hand­ful of exam­ples to get us dis­cussing. And of course the fun­da­men­tal issue is can we detect these ear­ly?

Of course you know, as we’ve seen in the pre­vi­ous speak­er, and also Takis Metaxis has done this work, if you can go after­wards and you have the time to do some real leg­work, you could find out per­haps oh, there was this group behind this ad. There was that paid con­sul­tant, or it was this cor­po­ra­tion, or it was this par­tic­u­lar orga­ni­za­tion. But, at that time very often the dam­age is already done, as Takis has shown in his work. So the trick is can we detect it ear­ly, before a lot of dam­age is done. And that’s what we’re try­ing to do, but we’re just at the begin­ning of that.