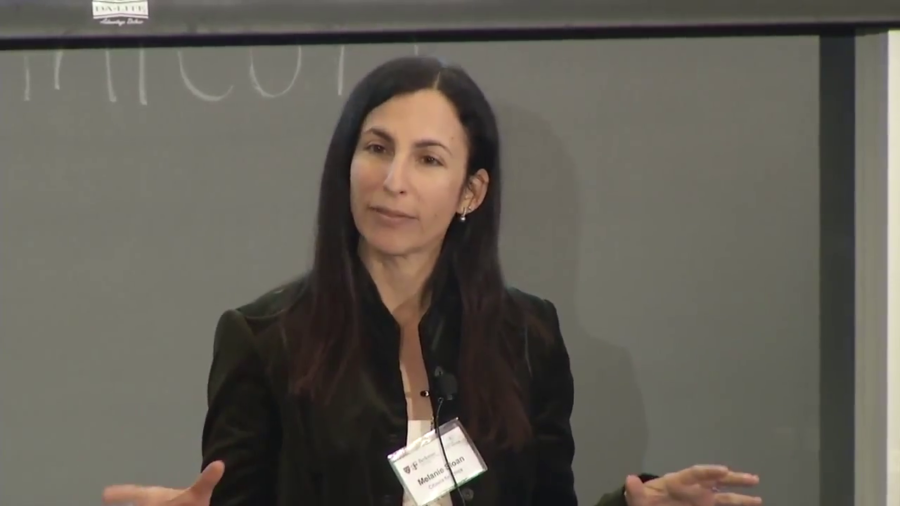 Susan Crawford: Melanie Sloane found­ed Citizens for Responsible Ethics in Washington. She’s a very expe­ri­enced pros­e­cu­tor with a lot of Hill expe­ri­ence as well, and real­ly one of our lead­ing experts in this area in con­gres­sion­al ethics. So Melanie can you bring us home with a case study?

All of his activ­i­ties are fund­ed by cor­po­rate inter­ests and they make huge dona­tions that are nev­er revealed to the pub­lic. He also goes across all media plat­forms. He uses adver­tise­ments in news­pa­pers, includ­ing full-page ads. He has run bill­boards. He uses Facebook. He has web sites. And he runs com­mer­cials on television. 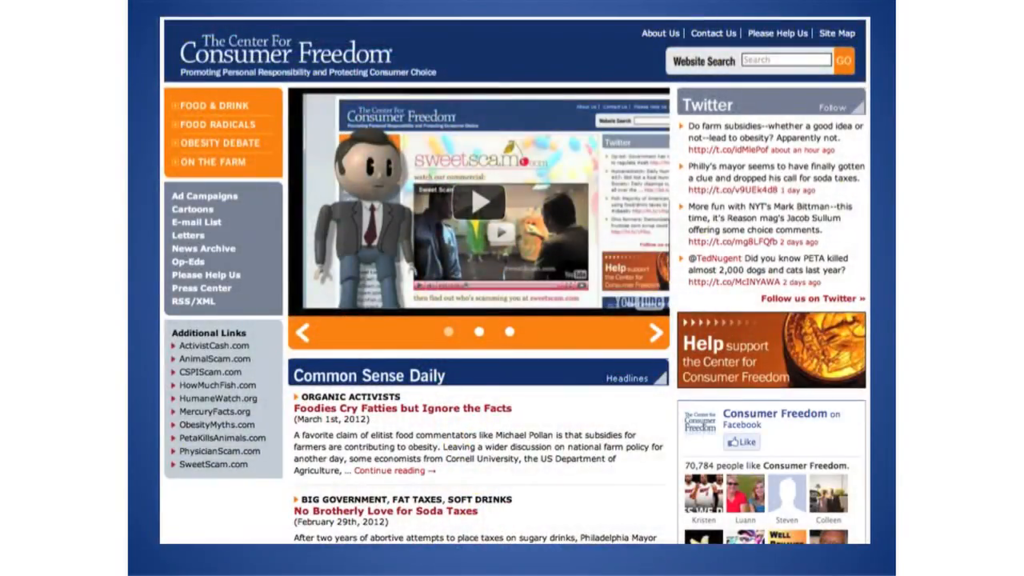 Back in the 1990s I think his first orga­ni­za­tion was the one you see up here now. It’s called the Center for Consumer Freedom. First it was known as the Guest Choice Network. And it received a $600,000 dona­tion from Philip Morris so that he could por­tray smok­ing in restau­rants before there was the smok­ing ban as a choice, because he was posit­ing to Philip Morris that Americans pre­fer to have choic­es and if you posit this as a choice you will make a bet­ter argument.

Center for Consumer Freedom also received a lot of mon­ey from say the beef indus­try to go after the People for Ethical Treatment of Animals and go after its tax sta­tus. And PETA was even­tu­al­ly sub­ject to an inves­ti­ga­tion by Senator Charles Grassley, then on on the Senate Finance Committee.

In 2004 CREW filed a com­plaint with the Internal Revenue Service— My orga­ni­za­tion, CREW, filed this com­plaint against Berman argu­ing that the Center for Consumer Freedom was vio­lat­ing its tax sta­tus as a char­i­ta­ble orga­ni­za­tion. First it was­n’t real­ly engaged in char­i­ta­ble activ­i­ties, it was actu­al­ly just engaged in paid activ­i­ties. And sec­ond­ly, Mr. Berman was engaged in some­thing called ​“pri­vate inure­ment,” which means that he was on both sides of the trans­ac­tion by being the Executive Director of these orga­ni­za­tions then con­tract­ing with his own orga­ni­za­tion and he was pay­ing him­self a for­tune to do this.

Apparently we lost. You nev­er hear any­thing from the IRS, but Berman only expand­ed his activ­i­ties after this. For exam­ple he then cre­at­ed anoth­er orga­ni­za­tion. Sweet Scam is anoth­er. One of the major things that Mr. Berman does is work in the food and bev­er­age world. And Sweet Scam talks about the myth of child­hood obe­si­ty and the dan­gers of corn syrup are over­rat­ed. Similarly, he has Fish Scam, which argues that mer­cury in fish isn’t real­ly a prob­lem after all.

And he has anoth­er orga­ni­za­tion called Interlock Facts, and if any of you actu­al­ly read your USA Today this morn­ing, there was a sto­ry about inter­locks. And in it was quot­ed the American Beverage Institute, and a woman named Sarah Longwell the Managing Director of the American Beverage Institute. But real­ly what she is is a paid employ­ee of Berman and Company. So here it was, an arti­cle in USA Today about inter­locks and it was real­ly being paid for by the peo­ple who are opposed to interlocks.

Berman also has his own week­ly col­umn on the con­ser­v­a­tive web­site The Daily Caller. The bio post­ed there describes him as a long-time con­sumer advo­cate who ​“cham­pi­ons indi­vid­ual respon­si­bil­i­ty and com­mon sense policy.” 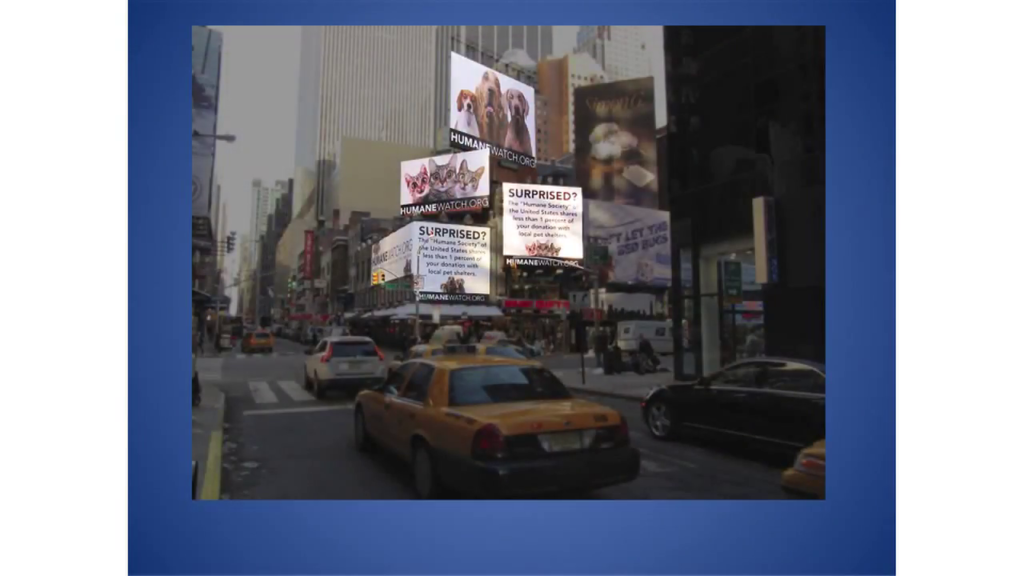 One of the most devi­ous cam­paigns I think he’s been involved with is HumaneWatch, which tar­gets the Humane Society, claim­ing that mon­ey donat­ed to the group does­n’t real­ly go to local shel­ters at all. He ran these bill­boards against the Humane Society in Times Square in January of 2011, and he ran oth­er sim­i­lar ads lat­er in the year. And in fact just last week dur­ing the Academy Awards, he ran an adver­tise­ment that reached an esti­mat­ed 39 mil­lion view­ers. He’s also using Facebook, and HumaneWatch’s Facebook page has 389,000 fans, prob­a­bly peo­ple who are ani­mal lovers who believe that they are actu­al­ly sup­port­ing more like­ly the Humane Society.

So what Berman does is he claims this group CharityWatch, which is also known as the American Institute of Philanthropy, gives the Humane Society a D rat­ing. On the oth­er hand, the nation’s lead­ing char­i­ty eval­u­a­tor, Charity Navigator, gives the Humane Society 4 out of 4 stars, and the Better Business Bureau says it com­plies all of their require­ments for char­i­ta­ble account­abil­i­ty. So, many of the ani­mal lovers who are tar­get­ed by all of this are being mis­led, and like­ly this is being paid for by the meat indus­try, which suf­fered a huge black eye when the Humane Society used secretly-made video tapes to expose the abuse of cattle.

Aside from food and bev­er­age issues, Berman has prob­a­bly spent the most time on union issues. He runs some­thing called the Center for Union Facts, and I want to run this ad he ran actu­al­ly dur­ing the Super Bowl for you.

So, Berman was the guy in the gold watch. Most guys prob­a­bly work­ing in the mechan­ics shop aren’t wear­ing gold watch­es but Berman was wear­ing a gold watch where he said, ​“Not me.” But think about how much mon­ey he must’ve had. This ran dur­ing the Super Bowl. And it reached poten­tial­ly over 111 mil­lion view­ers. The ad has also been viewed 250,000 times on YouTube.

In addi­tion to tele­vi­sion ads—and he’s run these kind of ads for a long time on CNN, MSNBC, and Fox—the Center for Union Facts has run full-page ads com­par­ing union lead­ers to Hugo Chavez, King Jamil, and Fidel Castro, and he’s run these in The New York Times, The Wall Street Journal, USA Today, and The Washington Post, and these are full-page ads which costs over $100,000 a shot.

He’s also man­aged to trick a lot of jour­nal­ists into writ­ing sto­ries with his view­point on these union-related issues. For exam­ple in May of 2009, a Harper’s Magazine arti­cle went through and ana­lyzed a piece that appeared in the Orlando Sentinel which was called the ​“Growing Numbers of Dems Opposing EFCA,” which is the Employee Free Choice Act. This cit­ed a polit­i­cal con­sul­tant named Joe Kefauver and anoth­er lead­ing polit­i­cal offi­cial, both long-time Democrats who sup­port­ed Obama—according to the story—as being real oppo­nents of EFCA. And Kefauver also said that being sup­port­ive of orga­nized labor should­n’t be a lit­mus test for being a good Democrat. And then the arti­cle ran on the Center for Union Facts web site.

But the truth was Kefauver was a Director of the Center for Consumer Freedom, and was the paid Director of Development for Berman’s Employment Policies Institute, which is a group that says the min­i­mum wage hurts employ­ment. (That’s also a Berman group.) And Berman and Company also paid Kefauver’s firm for con­sult­ing. Further, this guy in ear­ly 2007 had been paid by Walmart, and Walmart was a major fun­der of the Center for Union Facts. 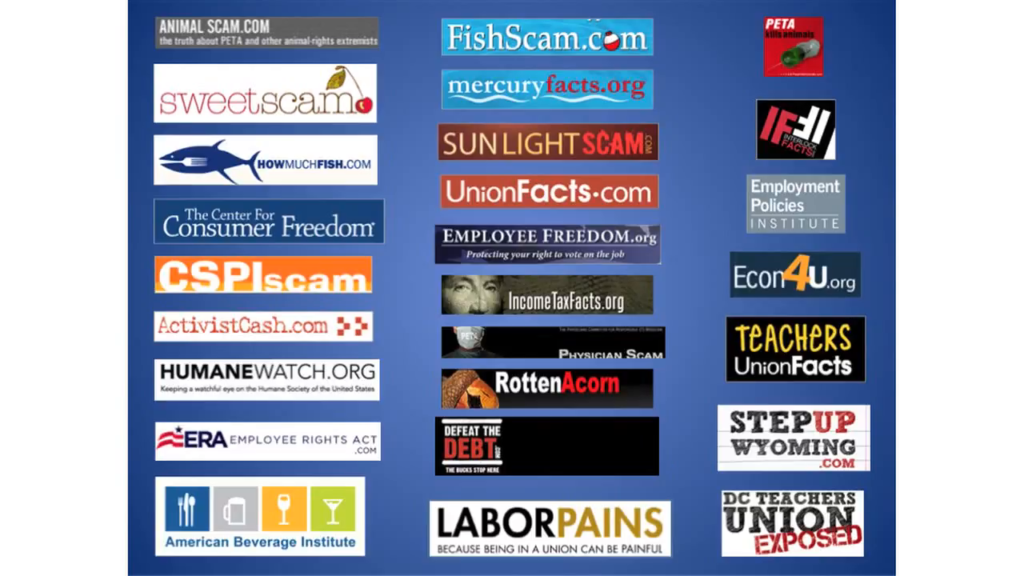 By CREW’s count, Berman now has at least twenty-five of these groups—here’s a bunch of them—and web sites, all of those as I said which are staffed by those who work for his PR firms. These self-described experts then push Berman’s views. One of his employ­ees alone, for exam­ple, is the Chief Administrative Officer of Berman and Company; the Senior Economic Analysis and Senior Research Analyst with the Employment Policies Institute; the Government Affairs Director for the Center for Consumer Freedom; and Director of State Affairs, spokesper­son, and lob­by­ist for the American Beverage Institute. I don’t know about you, but my full-time job real­ly takes me busy full-time. I don’t have time to be the Executive Director of twenty-five groups, much less have all these dif­fer­ent posi­tions in all these oth­er kinds of groups. 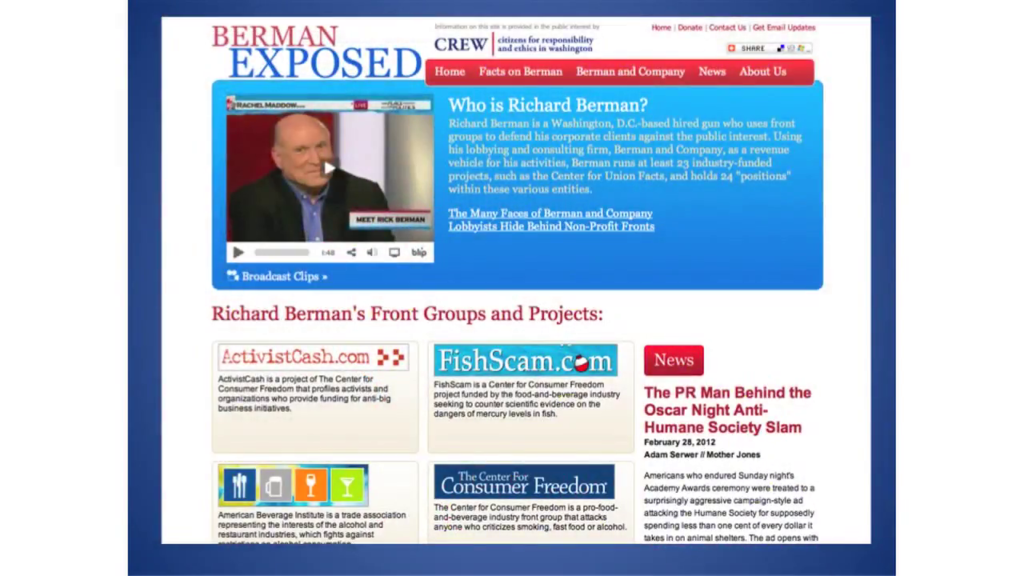 Appalled by Berman’s antics, years ago CREW start­ed a web site called berman​ex​posed​.org to try and inform jour­nal­ists about the truth about Berman and his con­duct. When we find a new group, we add it to the site. When we see Berman or one of his cronies cit­ed in a news arti­cle, we call the jour­nal­ists, we call the papers, and we try to let them know what’s real­ly going on. 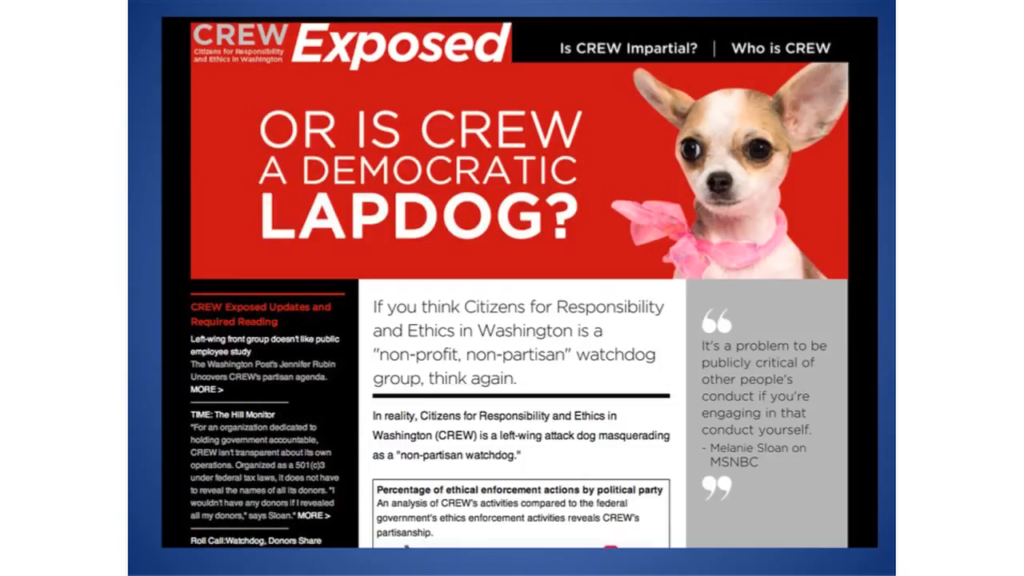 And we must be get­ting to him because last sum­mer, mim­ic­k­ing our web­site, Berman devel­oped a new web­site called crew​ex​posed​.com, which is designed to expose the truth about CREW. He ran a full-page ad in Politico against us last August, and then last week he ran two ads, one in Politico and one in The Hill, Calling us a Democratic front group. And I think the real point of these ads, which are run in trades in Washington, is to try and under­mine CREW’s cred­i­bil­i­ty with reporters so that when we call him out and we talk about the kind of things he’s doing, nobody will lis­ten to us and we will be undermined.

But under the the­o­ry that imi­ta­tion is the sin­cer­est form of flat­tery, I sup­pose I should be pleased. Still though, Berman’s oper­a­tion is thriv­ing. He’s mak­ing mon­ey hand over fist, and from paid cor­po­rate inter­ests that are against the pub­lic wel­fare. And it’s impor­tant for folks like you to know about him and know what he’s doing and expose him, because I think this is a grow­ing indus­try prob­lem giv­en his suc­cess, the fact that the IRS is let­ting him con­tin­ue to do this. There’s bound to be more Bermans out there. So thank you.