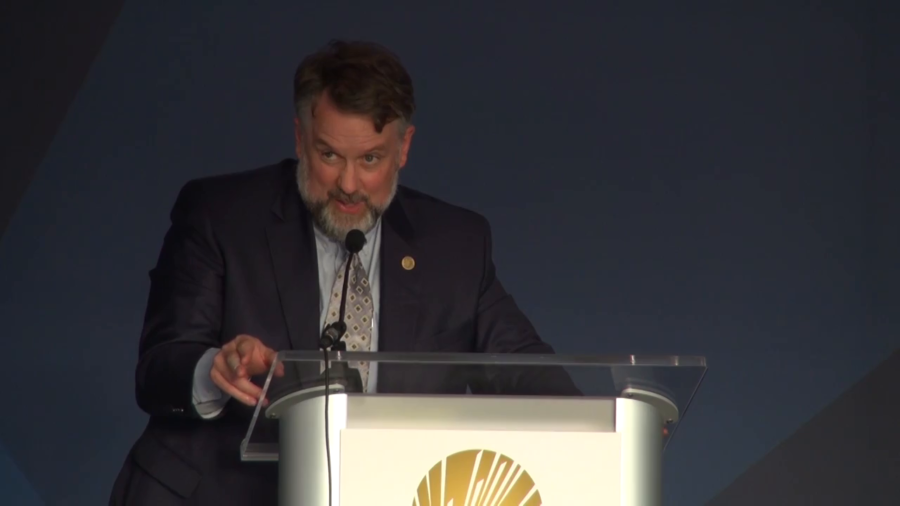 Craig Partridge: If you talk with peo­ple wor­ried about the evo­lu­tion of tech­nol­o­gy one of the things they often com­ment about is that in many cas­es the future is quite clear. You can see it com­ing, but you don’t know how far away it is. Okay. Sometimes it’s quite far away. If some of you have read the ear­ly works of Alan Turing you can see that some of the things we’re strug­gling with in AI today are things that Alan Turing antic­i­pat­ed forty or more years ago.

On the oth­er hand, you also run into sit­u­a­tions like the Internet in the 1980s. In that case we could see the future. And it was a series of trains bar­rel­ing at us at full speed.

At the same time the Internet com­mu­ni­ty was extreme­ly small at that time. And so basi­cal­ly any­body who had the abil­i­ty to spell ​“IP” and was eager to actu­al­ly help out was draft­ed to fix things. And that’s how I got into this game ear­ly on. And in par­tic­u­lar, my first step was to dis­cov­er that the pro­posed way for rout­ing email using domain names had a bug in it. So I wrote up the bug. I wrote up a solu­tion to it which I will tell you right now was excep­tion­al­ly ugly. And I sent it to Jon Postel.

And Jon sent me back a note say­ing, ​“Why does this look so ghastly?”

And I explained to him it was the only way giv­en the way that DNS have been struc­tured to fix things unless we made some small changes to the DNS.

And he said, ​“Well let’s make those changes because this is ter­ri­ble.” And he said, ​“And since you were smart enough to find the bug, you’re the one who gets to fix it.” Okay.

And then he was kind enough at least to give me some help. He round­ed up a few oth­er peo­ple to advise me in the process. And so that’s how I end­ed up being the guy who invent­ed how email is rout­ed. I found the bug and was the stuc­k­ee because there was­n’t any­body else. So this is con­sis­tent with Ed Krol’s descrip­tion of the state of the world in the 1980s and ear­ly 1990s.

That said I do have a num­ber of peo­ple to thank for that and for the lat­er work that I did on high-performance routers and encryp­tion devices, so I want to name a few peo­ple. Related to email first of all there’s Jon, who had the con­fi­dence to tell some­body who was under 25 at the time that he should be in charge of design­ing how email was rout­ed. He was very gra­cious about it, and he stepped in peri­od­i­cal­ly when he thought the com­mit­tee was get­ting a lit­tle overea­ger about advising.

I also want to thank Vint Cerf, who played a crit­i­cal role in help­ing me learn how to lead tech­ni­cal projects in the years imme­di­ate­ly fol­low­ing. Working with Vint is a delight. If any­body gets a chance to work with Vint on a project, do it.

Beyond that Larry Landweber who is here and who taught me the ben­e­fit of reach­ing out inter­na­tion­al­ly at the time when the inter­na­tion­al Internet com­mu­ni­ty was small but extreme­ly passionate.

Dick Edmiston, my boss at the time who encour­aged me to take on the risk. And Dave Crocker, who was always lib­er­al with his advice—and it was usu­al­ly sound—for those of you who know Dave this will sound very familiar.

After the email rout­ing I went on as I said to work on high-performance routers and encryp­tion devices, and that in itself was also an extreme­ly excit­ing expe­ri­ence. Building the world’s fastest router at a time that peo­ple believed that router tech­nol­o­gy could­n’t go faster was an extra­or­di­nary expe­ri­ence and that only worked because I had a few very extra­or­di­nary peo­ple who worked with me.

One is a gen­tle­man named Walter Milliken, who prob­a­bly many of you have nev­er heard of, or if you do you know him from the Steve Jackson games law­suit many years ago by the EFF. But he is actu­al­ly one of prob­a­bly the top four or five peo­ple in the world at fig­ur­ing out how to make hard­ware and soft­ware work togeth­er. The kind of guy that says, ​“No no, you don’t want to make that bit the con­trol bit because it will cause the soft­ware to require an inter­rupt every tenth time you receive some­thing. You don’t want that.” That kind of guy, there are only a few in the world who could do that. Other peo­ple are folks like the late Chuck Thacker. Walter was one and saved me on both encryp­tion devices and routers from mak­ing many mistakes.

Beyond that, Dr. Steve Kent who’s also a mem­ber of the Internet Hall of Fame and who helped in many of the hard prob­lems on the high-performance encryp­tion devices.

More gen­er­al­ly, it has been a great priv­i­lege to work at BBN. BBN turned on the ARPANET in 1969 and it has retained a long tra­di­tion of extreme­ly high-quality net­work­ing peo­ple so you can stroll down the hall any­time with a chal­lenge and find some­one who’s hap­py to give you an opin­ion, usu­al­ly a very good one, about how to make your work better.

And I want to thank obvi­ous­ly my fam­i­ly, my par­ents, my sis­ter, my son, for their sup­port, par­tic­u­lar­ly since it means I’m usu­al­ly not around. I’m on a plane some­where to work with oth­er peo­ple relat­ed to the Internet. And I want to thank the ISoc for this tremen­dous hon­or. So thank you very much.