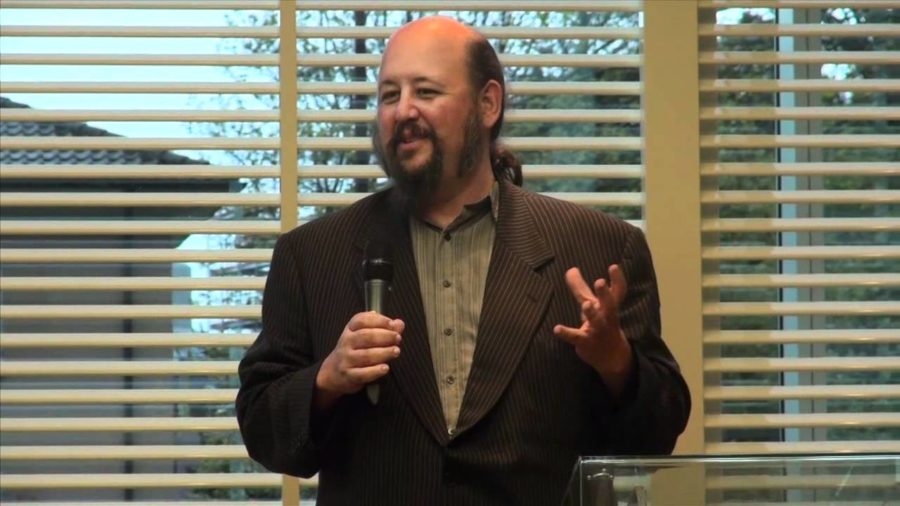 This is incred­i­bly hum­bling, to be in this con­text here among so many of the peo­ple that not only are so instru­men­tal to the con­struc­tion of a sys­tem that, you know— I’m of a gen­er­a­tion that now me and my peers are build­ing Internet appli­ca­tions in Silicon Valley in the sort of frothy Internet econ­o­my that exists there now. And it’s just amaz­ing to imag­ine that this group here is sort of upstream in his­to­ry from all of that. Including my cousin Jon, who for a long time I think we real­ly thought of him as sort of the Gandalf in the fam­i­ly. We had real­ly very lit­tle idea what he actu­al­ly did, but he was radi­at­ing kind of a qui­et, will­ful integri­ty which I think real­ly was the foun­da­tion of much of what hap­pened in his kind of shep­herd­ing of many of these processes.

And I feel like there might be at least one anec­dote to share, which is that well, he was…always real­ly very kind of casu­al in his approach to how he sort of explained what was hap­pen­ing to the fam­i­ly. And he would always give me these dot-matrix print­ed gift cer­tifi­cates to come and play Colossal Cave. When I was a kid, I would go down to ISI, log into the com­put­er and play adven­ture games. And one year, he asked me if it felt any dif­fer­ent to be play­ing the game, and I said no. And he said, ​“Well you know, you’re sit­ting here in Marina del Rey with me, but you’re play­ing the game at Stanford.” And so that was to me sort of a moment where I began to under­stand what this was all about. You know, from a kid’s perspective.

But then a sec­ond anec­dote was sit­ting around I think a table at Christmas time, when Jon had to leave the room to take a phone call, and he came back and said that it was the telecom­mu­ni­ca­tions min­is­ter of the Ukraine who was call­ing to say that he would like a top-level domain because the Soviet Union was dis­solv­ing. And you know, this is just kind of out of the blue for peo­ple that don’t real­ly under­stand what Jon is doing down at ISI all the time, to real­ize that he’s in com­mu­ni­ca­tion with these peo­ple that sort of— You know, it’s what the Internet, was becom­ing was this heart­beat of inter­na­tion­al com­mu­ni­ca­tions that real­ly was begin­ning to help struc­ture these types of trans­for­ma­tions like the Soviet Union’s dis­so­lu­tion. So there was a real pow­er­ful sense that that was sort of under­ly­ing all that he was work­ing on, was a real aware­ness of what the effects of these tools were on people.

I think that was anoth­er real important—why he would be so inter­est­ed in the RFCs, and why he’d be so inter­est­ed in mak­ing sure that peo­ple under­stood what it was about. The idea of con­sen­sus and community-building, which is now— You know, I was part of the design team on Flickr. And Flickr is a community-based ser­vice for pho­tos, but real­ly what we had dis­cov­ered, the whole idea of ​“Web 2.0” is that it’s the social fab­ric that under­lies the tools that real­ly make the tools viable. And I think that Jon real­ly was the shep­herd of the community.

You know, we talk about ​“community-building” online as a set of users now, but the com­mu­ni­ty that Jon built was the actu­al com­mu­ni­ty that cre­at­ed the Internet in the first place, which is a very pow­er­ful— I mean, the idea that one could sort of be able to nego­ti­ate the roil­ing sort of waters of the pol­i­tics and the tech­nolo­gies and things like that to cook down all of these ini­tia­tives into things that peo­ple could all kind of con­sume and under­stand and share with each oth­er, is a pro­found thing. So it was not until lat­er in life that I sort of began to under­stand what Jon real­ly rep­re­sent­ed, and it’s just such an amaz­ing hon­or to have him in my fam­i­ly. And it’s an amaz­ing hon­or to rep­re­sent him here with all of you. Thank you very much.