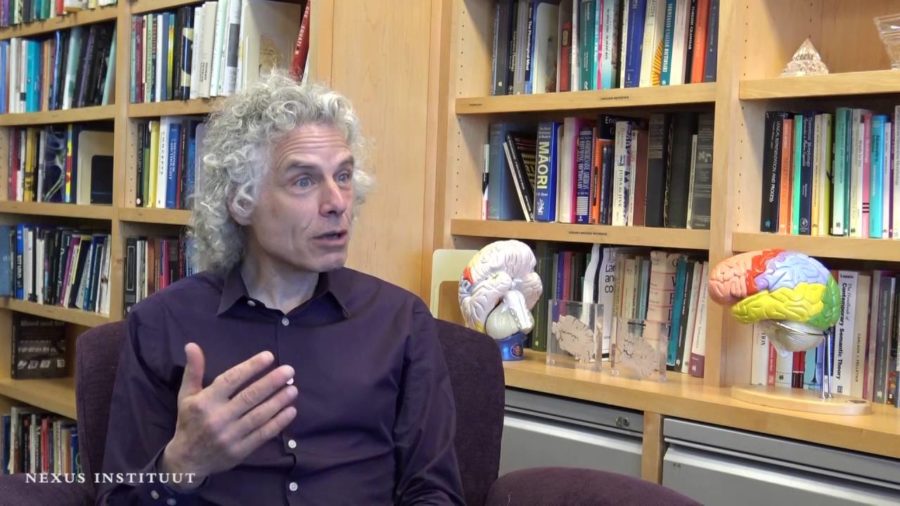 Steven Pinker on Why Doom is not Inevitable

presented by Steven Pinker
in The Nexus Institute » Nexus Conference 2016: What Will Save the World?

Rob Riemen: Steve Pinker, thanks mak­ing time to meet you here at Harvard, still the best uni­ver­si­ty in the world. Can you tell a lit­tle bit more about the inter­est of your schol­ar­ly work? What is it that you’re work­ing on and why?

Steven Pinker: I’m inter­est­ed in human nature, and for­tu­nate­ly that cov­ers many top­ics. I have writ­ten on every­thing from how to write well, to why lan­guages have irreg­u­lar verbs, to the his­tor­i­cal trends in war, peace, mur­der, and geno­cide, to visu­al cognition—how we form men­tal images, how we rec­og­nize shapes and faces. And one of the great advan­tages of being a psy­chol­o­gist is that you can write about all of these top­ics because they all have to do with human nature.

Riemen: And do you think that because you know, there are a few oth­er fields like philoso­phers or the­olo­gians, who claim also to know every­thing. What’s the difference?

Pinker: Well, phi­los­o­phy is very much relat­ed to psy­chol­o­gy, and of course it was philoso­phers who first raised ques­tions about the nature of human nature. I don’t think there’s a sharp divi­sion between the field of phi­los­o­phy and the field of psy­chol­o­gy. There are philo­soph­i­cal ques­tions and psy­cho­log­i­cal ques­tion. Philosophical ques­tions about the nature of ideas, how they’re log­i­cal­ly relat­ed to each oth­er. Psychological ques­tions are more empir­i­cal. How does the human brain come to think cer­tain kinds of thoughts and have cer­tain kinds of val­ues. But in my expe­ri­ence, they’ve all been close­ly related.

Riemen: You have been so extreme­ly kind to accept our invi­ta­tion to be one of the speak­ers of the Nexus Conference on November 12, ​“What Will Save the World?” You’re world-famous, you’re very much in demand, you’re an extreme­ly busy man. Why did you accept the invi­ta­tion to come to Amsterdam, make time, and to be present and speak at that conference?

Riemen: One of the most famous peo­ple in the world of psy­chol­o­gy, Sigmund Freud, was I guess much less opti­mistic. If I under­stand him well, he was espe­cial­ly inter­est­ed in the ques­tion, ​“Why are things going wrong all the time?” We will also have reli­gious peo­ple, and prob­a­bly they will say, ​“Well, it goes wrong because there’s some­thing like orig­i­nal sin.” On a sec­u­lar lev­el, Freud will point at the dark side of human nature. Why do you think it’s going wrong so often?

Pinker: Yes. Well, like Freud I do believe that human nature has a dark side. I believe that being a mem­ber of a civ­i­lized soci­ety involves com­pro­mis­es and dis­con­tents, as Freud so famous­ly put it. I think that aspects of human nature inevitably come into con­flict with the aspects of human nature in oth­er peo­ple. I don’t think that men and women want exact­ly the same thing. I don’t think that par­ents and chil­dren want exact­ly the same thing. Even close friends don’t always want the same thing. There’s always ten­sion, there’s always con­flicts of inter­est. That’s why there’s great lit­er­a­ture; that’s why there’s tragedy.

On the oth­er hand, one com­po­nent of human nature is the abil­i­ty to pose and solve prob­lems, and to com­mu­ni­cate our solu­tions to oth­er peo­ple via lan­guage. Thanks to writ­ing, we can accu­mu­late good ideas. We can try out ways of improv­ing human life, keep the ones that work, dis­card the ones that don’t work. Learn from our mis­takes, learn from our tragedies. And bit by bit, fig­ure out ways in which we can min­i­mize the effect of human con­flict. And I think the data show that we’ve been doing it.

Another rea­son that Freud was so pes­simistic is that he was sit­u­at­ed in one of the worst times of human his­to­ry, the years fol­low­ing the First World War, which he lived through, and imme­di­ate­ly pre­ced­ing the Second World War. He lived to see the Anschluss. His daugh­ter was arrest­ed by the Nazis. He escaped from the Nazis just in time to spend the last year of his life in London. And so he saw the clouds gath­er­ing for one of the worst inter­ludes in human his­to­ry, the Second World War.

And indeed, if the world that Freud lived in had con­tin­ued, none of us should be an opti­mist, because those were dark days indeed. And of course there were pre­dic­tions after the Second World War that the two world wars were just the begin­ning of an esca­lat­ing series. World War III was inevitable. It would be even worse because of nuclear weapons.

We are now more than sev­en­ty years after the end of World War II and World War III did not hap­pen. No nuclear weapon has been used since Nagasaki. The world has become more demo­c­ra­t­ic, more afflu­ent, more free, more peace­ful, in these sev­en­ty years. That’s no guar­an­tee that it will con­tin­ue. No one can prophe­cy the future. I don’t have the gift of clair­voy­ance to be able to see into the future. But it shows that the kind of doom that many intel­lec­tu­als felt after World War II is not inevitable. There are actions that we can take that reduce the risks, and for­tu­nate­ly we have been tak­ing— [record­ing cuts short]