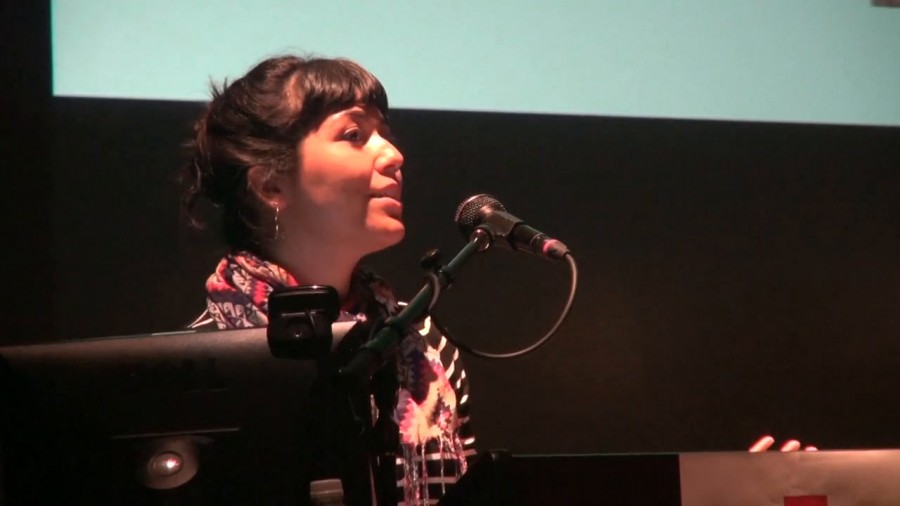 presented by Stephanie Migdalia Pi Herrera
in STUDIO for Creative Inquiry » Diversity: Seven Voices on Race, Gender, Ability & Class for FLOSS and the Internet
on 05/26/2015

I’m Stephanie, and I was invit­ed by p5.js and Lauren to come and speak. I’m just going to talk a lit­tle bit about my per­son­al expe­ri­ence, because I am a woman of col­or in tech. 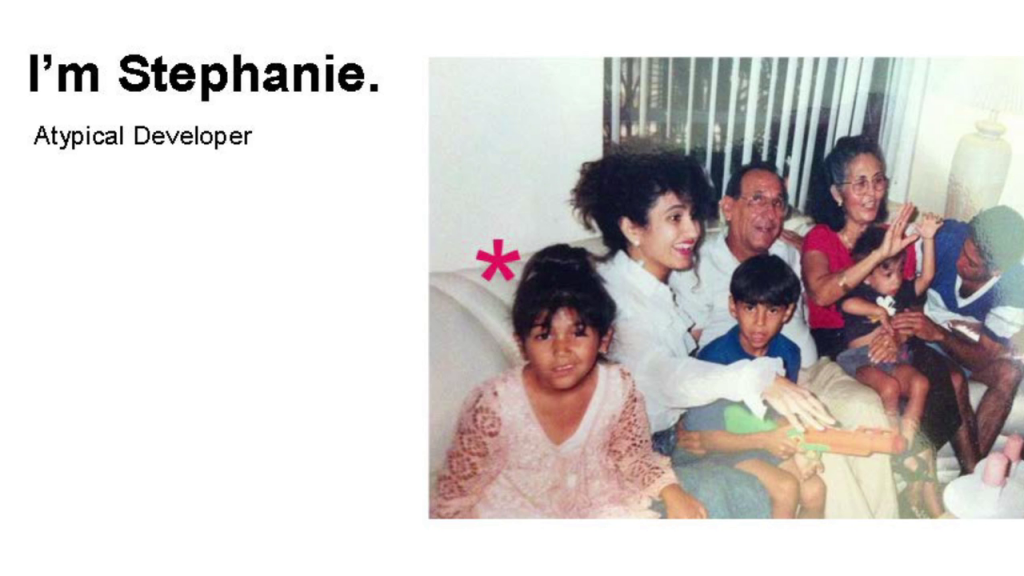 This is me real­ly young. This is my fam­i­ly. I’m what peo­ple would con­sid­er an atyp­i­cal devel­op­er. I did­n’t have a CS degree. I actu­al­ly only start­ed devel­op­ing eight months ago. I’m a Latina, so that means that I am one in 3% of devel­op­ers that are out there work­ing in the field, and I’m the first col­lege grad in my fam­i­ly, and I failed 10th-grade math, so I did­n’t have any of the things that peo­ple need to become devel­op­ers. But things hap­pened, and I will tell you about these things now, and I did become one. 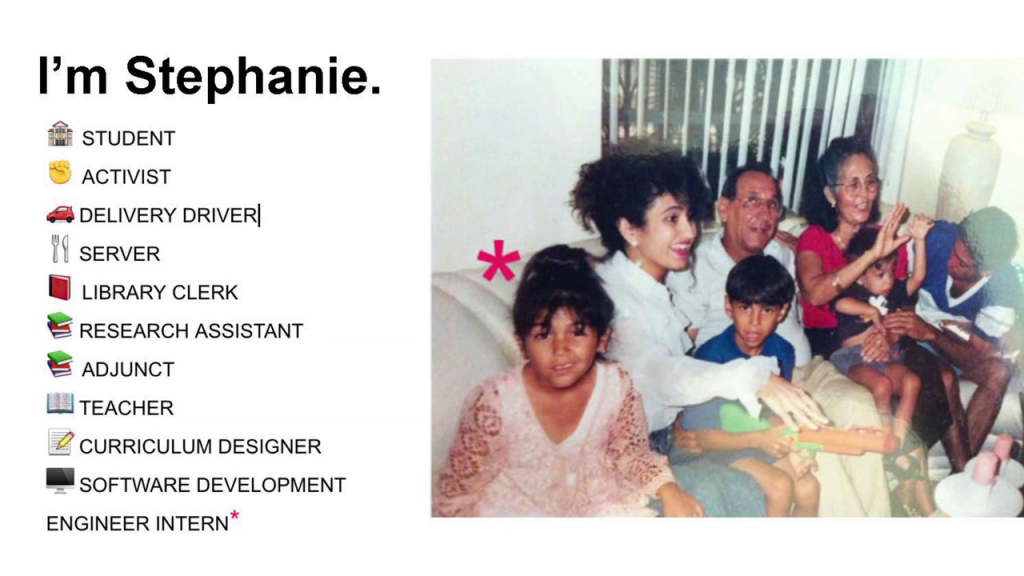 This is sort of a rough sketch of who I am in some sort of pro­fes­sion­al capac­i­ty and who I have been. I’ve been a lot of things, includ­ing a deliv­ery dri­ver, a library clerk, and then most recent­ly I was a teacher, a cur­ricu­lum devel­op­er, and now a soft­ware devel­op­ment engi­neer intern. In 2011, I got my Masters in Linguistics, and that was a real­ly excit­ing time, except that when you have a Masters in lin­guis­tics it’s real­ly hard to find a job, so after that I became an adjunct, because that’s what you do. I real­ly loved it, I had awe­some stu­dents. One of my stu­dents actu­al­ly crowd­fund­ed my way here to Pittsburgh, so that was awe­some. I guess I did a good job.

Then after that, I became a cur­ricu­lum devel­op­er, because I did have stu­dent loans and things to take care of. This job was inside of the tech space, but not in a tech capac­i­ty. I worked hand in hand with devel­op­ers, and I start­ed to see what these peo­ple were doing, and I thought that seemed kind of cool, but I failed 10th-grade math, so I could nev­er be a devel­op­er. Of course this was at a start­up, so there was that tech cul­ture that is endem­ic to star­tups, the bro­gram­mer cul­ture. So that was­n’t super cool, but I was still like, ​“I wish that I had been born a boy so ghat I could be a devel­op­er” and that I did­n’t fail 10th-grade math, and all of these things.

So last Fall, in a twist of fate, I became a stu­dent again. I was accept­ed into an all-womens’s tech school called Ada Developers Academy. It’s based out of Seattle, it’s tuition-free, and its goal is to diver­si­fy tech, at least through gen­der. I got accept­ed, which was crazy. That was a stroke of luck, and today I’m a devel­op­er in train­ing at Amazon, so I intern with them, and I’ll be grad­u­at­ing that pro­gram in August. I will be the first Latina to grad­u­ate that program.

So how did this hap­pen? I vis­it­ed ITP in 2013. Completely ran­dom, I was vis­it­ing New York, and I got to see peo­ple who were cod­ing who did not look like the peo­ple at my start­up. Who did not act like the peo­ple at my start­up. It was a very dif­fer­ent pro­gram, obvi­ous­ly a lot of artists. That was real­ly inter­est­ing to me, and I was like, ​“Oh. These are atyp­i­cal devel­op­ers. Maybe I could be an atyp­i­cal devel­op­er.” So I applied to this pro­gram, got accept­ed, which was a crazy stroke of luck again. 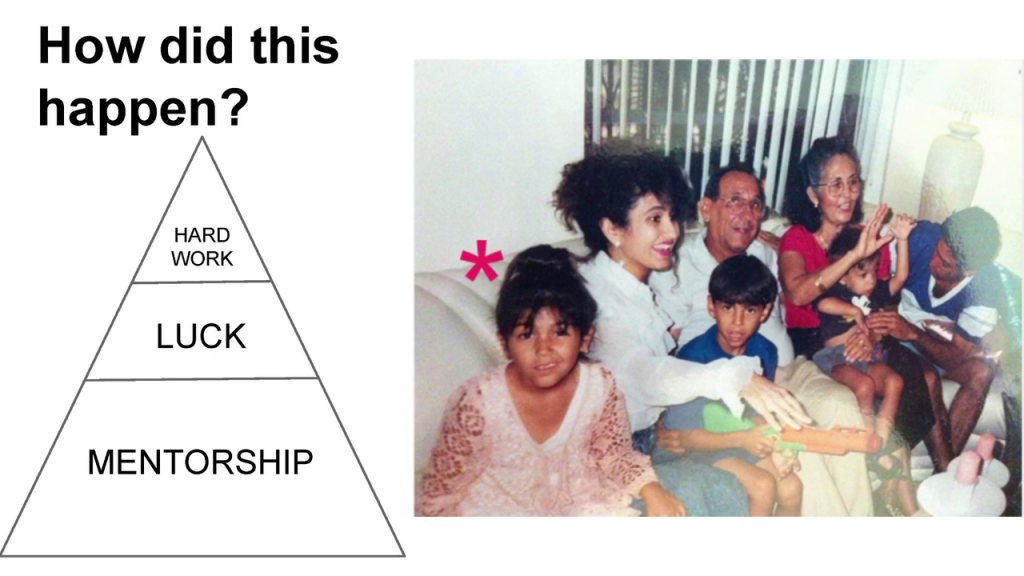 This is what I con­sid­er my suc­cess pyra­mid for how it hap­pened, and how it end­ed up hap­pen­ing for a lot of oth­er women of col­or who have been to sim­i­lar pro­grams that I have. It’s that we had men­tor­ships, so we had peo­ple that we looked up to that were in the field that could help us, and we had a lot of luck, which is an unfor­tu­nate thing to have to need to become a devel­op­er. It’s not like when you go to Carnegie Mellon’s web page to apply for a CS degree, it does­n’t say you need luck. But for some peo­ple that’s actu­al­ly what it takes.

And then hard work. Hard work should be the same for every­one, it should­n’t dif­fer based on race, based on gen­der. So I’m here at p5.js because I want a suc­cess pyra­mid to look more like this: 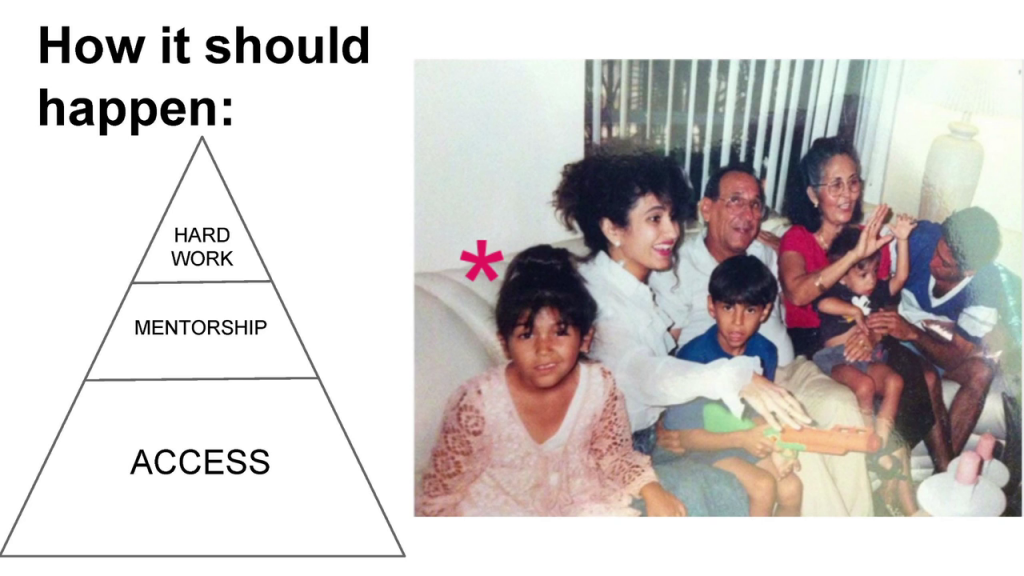 I want access to be the first thing that is real­ly required, and I want access to be avail­able to every­one, includ­ing peo­ple like snarky seven-year-old Stephanie. Mentorship should still be impor­tant, and men­tor­ship should come from peo­ple that look like snarky seven-year-old Stephanie. It should [come] from peo­ple who look like me, or peo­ple that are mar­gin­al­ized, so that you feel like, ​“I don’t need to be [a] start­up bro­gram­mer to make it. I can look like some­thing else.” And hard work in impor­tant, and it should be the same for everyone.

So this is the sto­ry of how things hap­pened, and I’m real­ly glad that I had all those oth­er expe­ri­ences, because I still am a lot of the things that I was before. I’m still an activist, I’m still a teacher, I still do cur­ricu­lum design, but now in the capac­i­ty of tech. So I feel like I’m able to reach a lot more people.

That’s my sto­ry. Thank you.

Overview page at the Studio for Creative Inquiry’s web site.