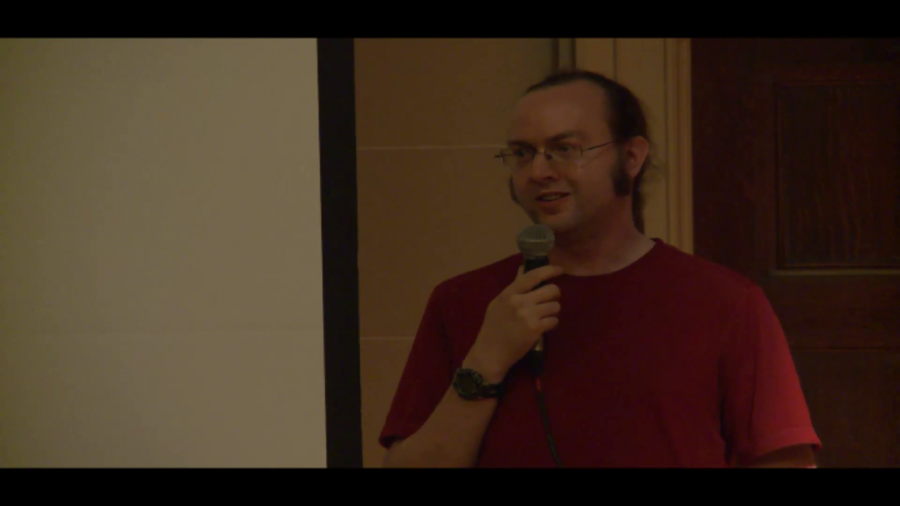 So I was think­ing back about all the var­i­ous mem­o­ries of Aaron, and I want­ed to share three of them with you. Two of them fun and cheer­ful, and one of them a lit­tle bit less fun and cheerful.

The first one was back in 2000, or 2001 or some­thing at an O’Reilly con­fer­ence, and there was this 13 year-old kid and Zucco has promised his par­ents that, ​“I’ll take care of him. He’ll be fine. Don’t wor­ry,” and his par­ents were ner­vous about leav­ing their 13 year-old kid at a big O’Reilly con­fer­ence with 2,000 peo­ple. And in fact it worked out fine. The oth­er mem­o­rable part of that, first he was a total­ly ordi­nary 20-something year-old per­son in a 13 year-old kid. He was talk­ing about all the tech­ni­cal stuff just like we were. Everything was fine. Then we went out to lunch, and every­body’s like, hey let’s go to a Vietnamese place, let’s go to a Chinese place, and Aaron is like, ​“Oh yuck, I don’t like any of that weird food.” So those were some reminders at that point.

So that was the first sto­ry. The sec­ond one, I remem­ber a few years lat­er at CodeCon when Len Sassaman and Bram Cohen were orga­niz­ing at a SoMa venue that was 21+. I went out to get some fresh air at one point, and there was Aaron hang­ing out out­side because he could­n’t get in because he was like 16 years old and they would­n’t let him into the 21+ venue that CodeCon was hap­pen­ing. So I guess that was one of the first sub­ver­sive acts that Aaron and I did togeth­er, where I smug­gled him into CodeCon so that he could inter­act with oth­er peo­ple and his peers. And I guess I won’t spec­i­fy which oth­er sub­ver­sive acts come after that. We can leave them implicit.

But then the third sto­ry that I was think­ing about was when the Tor dev meet­ing hap­pened at MIT quite a few years ago, and Aaron emailed me and said, ​“I’d real­ly love to be there, but I have a restrain­ing order and I’m not allowed to set foot on MIT so can you move it some­where else?” And I thought to myself, ​“Okay, what sort of wild antics have you been up to late­ly that caused that to hap­pen? I mean, geez.” So it was­n’t a total mess in that we met him at Harvard after­wards and talked for a while, but why could­n’t you, Aaron, have told us? Why could­n’t you have explained what was going on? And it turns out (I’ve learned a lot since then) I’ve learned all about grand juries. Jake men­tioned the grand jury dis­cus­sion in the last blurb. It turns out when you get your grand jury sub­poe­na and you find a lawyer and you talk, the very first thing the lawyer tell you is, ​“Don’t tell any­body. Don’t tell any­body that you got this,” because appar­ent­ly the first thing that hap­pens when you go into the grand jury and they ask you fish­ing expe­di­tion ques­tions and they ask you what­ev­er they want to ask you, the first thing is, ​“Tell us every­body you’ve told and why.”

So the first thing you do when you learn about these things is you pro­tect your friends by not shar­ing, and that’s exact­ly how they tear apart our com­mu­ni­ties. So I would say raise your hand if you’ve got­ten a grand jury sub­poe­na, but many peo­ple here will choose not to raise their hands because they’re tak­ing legal advice. This is ter­ri­ble. This is fucked up. This is the way the Justice Department, the jus­tice world, is rip­ping apart our com­mu­ni­ties by iso­lat­ing us one by one.

So, I don’t have fix­es for that, but here we are look­ing at the pow­er of the sys­tem and the cor­rup­tion of the sys­tem that it wields against peo­ple like us to try to pre­vent us from hav­ing con­trol over what we’re doing. To try to pre­vent us from being empow­ered or feel­ing empow­ered. So I look at that and I think okay, what can I do against this huge, billion-dollar oppres­sion indus­try? What can I do against these Justice Department peo­ple whose career ambi­tions involve killing my friends? How can I fight back against that? Do I stand up and get noticed and then I become one of their tar­gets also? What do I do?

One answer there is build­ing tools, infra­struc­ture tools like Tor, that then many oth­er peo­ple in the world can use in their prod­ucts and their projects and their goals, like we’ve heard about today, where oth­er folks like SecureDrop and Library Freedom and the list goes on and on, and WikiLeaks and Chelsea and so on. So the goal there is to have an under­ly­ing infra­struc­ture that allows peo­ple to be safe in their com­mu­ni­ca­tion, and that empow­ers them to lev­el the play­ing fields, and that empow­ers them to make the pow­er struc­tures a lit­tle bit less uneven.

So that was my polit­i­cal rant for the day, and let me add in a lit­tle bit of tech­ni­cal stuff, because I know that Aaron would’ve enjoyed that at least as much.

We heard ear­li­er today about Let’s Encrypt, which is real­ly great. The idea is that every web page on the Internet should be able to get an SSL cer­tifi­cate so you can get encryp­tion. That sounds good. Let me throw out an idea there for you. Wouldn’t it be cool if we could, as part of the Let’s Encrypt client so it’s auto­mat­i­cal­ly built in and it just hap­pens mag­i­cal­ly, would­n’t it be cool if every web site could get an onion address along with its SSL cer­tifi­cate auto­mat­i­cal­ly, for free, it just hap­pens. You either press the but­ton say­ing ​“Yes I want an onion address also” or it’s on by default and you don’t unpress the but­ton and when­ev­er you’re sign­ing up to get your SSL cert, it auto-generates an onion address and off you go.

Facebook has an onion address right now, and I was just talk­ing to Brewster ear­li­er about set­ting up an onion address for archive​.org. So if you’re think­ing of set­ting up some­thing like that for your web site, thumbs up, that sounds great. Turns out there are some pol­i­cy, I guess bureau­crat­ic prob­lems there, where the CA mafia does­n’t real­ly want to relin­quish con­trol that much that quick­ly, but we’re patient and stub­born, and I imag­ine over time that will start to work.

But I guess I’ll end with think­ing about onion ser­vices differently.

Aaron was a huge fan of hid­den ser­vices. You see that in the DeadDrop world. You see that in Tor2Web, which was a project he worked on that lets ordi­nary peo­ple who don’t know what Tor is still be able to reach .onion address­es in the world. So when Facebook set up their web site as an onion ser­vice, I start­ed off, as many peo­ple did, say­ing, ​“I don’t under­stand. Why does Facebook need pri­va­cy for their web site? I know where their web site is. This is stu­pid.” And I’ve come to believe that I was real­ly wrong on that.

So here’s the way I’ve been look­ing at it recent­ly. You know how ten years ago when you talked to some­body who ran a web site and they said, ​“I don’t need to pro­vide SSL for my web site, because my users don’t need safe­ty” or ​“my users don’t need secu­ri­ty” or ​“my users aren’t impor­tant for that?” And now, ten years lat­er, we know that those peo­ple are self­ish and greedy and they’re not think­ing about their users, because it should be up to the users what secu­ri­ty they want to get. It should be up to the users, ​“Do I want encryp­tion going to this web site? Do I not want encryp­tion? What sort of secu­ri­ty do I want?”

Similarly, right now we hear peo­ple say­ing, ​“Oh I don’t need to run an onion ver­sion of my web site, because my users…” and then they have some similarly-bullshit excuse there. So over the com­ing years, hope­ful­ly it will become total­ly nor­mal and com­mon­place for peo­ple to have more pri­vate ways of reach­ing web sites, and then it will be up to the users to choose, ​“Do I want link encryp­tion? Do I want link encryp­tion plus pri­va­cy? How do I want to access this web site?” And it sure would be cool if the Let’s Encrypt folks could build that in.