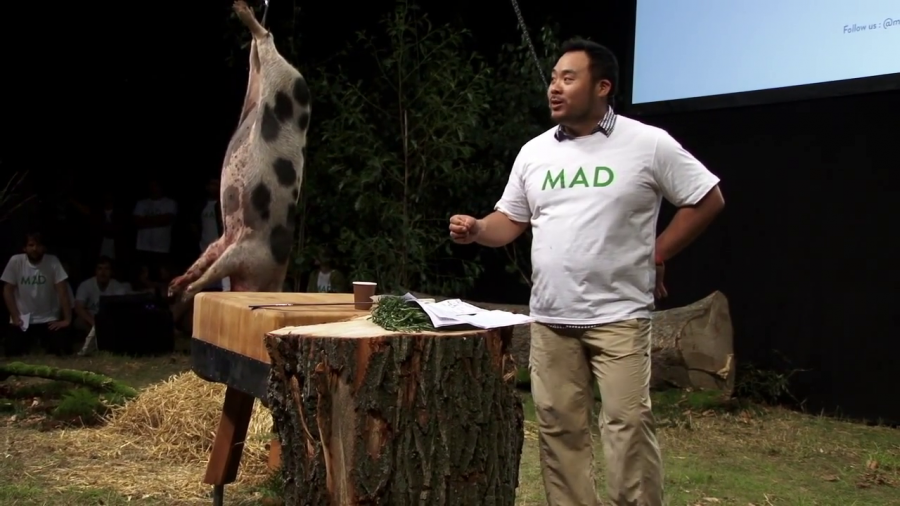 Good morn­ing, every­body. Welcome to the third annu­al MAD sym­po­sium. I’m hum­bled and thrilled that René and his team here at Noma invit­ed Lucky Peach and the Momofuku crew to come curate this event with you guys. This is a very spe­cial two days, and hope­ful­ly we’re going to learn and push and prod, and take this whole thing to anoth­er level.

When we were talk­ing about MAD maybe like four­teen months ago in terms of what we were going to talk about— You know, last year was about appetite, I felt very very con­fi­dent that we had to talk about guts, or some type food form of guts, in the lit­er­al sense and metaphor­i­cal­ly speak­ing. These next few days, peo­ple are going to stick their necks out, share sto­ries, that I hope will inspire you to bring back home, share with your cooks, your friends, your fam­i­ly, And to just…you know, I hope just move things forward.

Why did we pick the theme? It seems that when I’m with René or oth­er chefs, younger cooks come up to us and they always ask, ​“How did you do it?” Or, ​“Why did you become suc­cess­ful?” Besides it being a team effort, I think it all starts with the seed, a plant of an idea, you know, plant­i­ng an idea. And for us, you have to be unwa­ver­ing in that idea. And I think it’s real­ly accu­rate­ly reflect­ed in the com­bi­na­tion of courage, con­vic­tion, and sort of being fear­less and stu­pid at the same time. And we’re going to talk about that in its var­i­ous guis­es the next two days.

But going to the heart of the mat­ter in terms of guts, guts to me is a mea­sure­ment of some kind of moral cur­ren­cy. It makes you decide, makes you real­ize, how to make a deci­sion. The real­ly impor­tant deci­sions that you freak out about, that you talk your friends like, should I take this job? Should I open up this restau­rant? Should we close this restau­rant down? Should I start my own vine­yard? Should I do what­ev­er. Most of you guys are cooks, which is real­ly excit­ing. And these are the ques­tions that I hope that we can some­what help out and pay it forward.

And it’s dawned on me that for me, guts has been pret­ty impor­tant, because I nev­er thought myself as the most tal­ent­ed per­son. But I’ve been stu­pid enough to make real­ly stu­pid deci­sions, in ret­ro­spect. And in 2004 I opened up Momofuku with­out real­ly any cash and no real sup­port sys­tem oth­er than my stub­born idea that we’re going to open up this noo­dle bar. But real­ly, the main rea­son I did it is, and some­times I have to con­stant­ly remind myself of why I opened up a restau­rant that should nev­er have opened up, and it was because it was 2004… You know, September 11th had hap­pened. And ear­li­er that year three of my good friends had passed away—there was just a series of trag­ic events in my life that help you real­ize just how unim­por­tant a deci­sion that you think is very seri­ous is. You know, when you’re talk­ing about life and death, open­ing a restau­rant is pret­ty insignif­i­cant. And I was will­ing to wal­low in fail­ure, but know­ing that it’s fail­ure on my terms. And I want­ed to learn that. I want­ed to taste that fail­ure. And you know, there was suc­cess in that fail­ure, if that makes any sense.

So you need to have some type of naiveté. It’s a crazy idea, open­ing a restau­rant. It’s a crazy idea enter­ing this culi­nary pro­fes­sion, or endeav­or­ing to do any­thing. It’s fright­en­ing. I think I talked to more peo­ple— You know, some­body on my own staff is try­ing to fig­ure out what they’re going to do next. And it’s the biggest deci­sion he’s ever made in his life, and I can only tell him that he has to believe in his idea to the point where peo­ple are going to think he’s stu­pid, he’s crazy. They think that they’re going to laugh at him. I might even laugh at and crit­i­cize him. But those are the ideas that are real­ly real­ly great, the ideas that peo­ple con­sid­er trash.

And you know, guts is trash, too. So, we’re try­ing to push and learn and find that road that makes things make sense. It’s hard. We’re cooks. No one real­ly tells us what to do except when we’re in the kitchen. And find­ing that road out­side of it is very dif­fi­cult. So that’s that’s one of the rea­sons we want­ed to hold a sym­po­sium about guts.

And in a lot of ways it’s mak­ing the hard deci­sion, because you’re going to be alone. More often than not, you make a deci­sion that stems the tide, or is against the sta­tus quo, is crit­i­cized by your friends, your fam­i­ly like, ​“You should nev­er do this. You should nev­er open a restau­rant.” If you ask me to open a restau­rant, I’m going to be like, ​“That’s the stu­pid­est idea I’ve ever heard.” Even myself, you know.

But when it boils down down to it, you have to believe in it to almost utter fail­ure. And when you real­ize just how insignif­i­cant things are in your life, mak­ing a deci­sion about open­ing a restau­rant or tak­ing a job some­where or just gen­er­al­ly any­thing, it’s not that impor­tant if it’s not your friends and your fam­i­ly and your love ones. Life and death real­ly puts every­thing else in per­spec­tive. And along that way of lone­li­ness, you need to keep that and in your mind, and I think that for myself it’s a good reminder of how to make deci­sions. Like right now, I’m going through a lot of stuff again right now and, and it puts things into per­spec­tive about why am I stress­ing out about something.

And there’s no real one road to suc­cess. There’s no mag­ic bul­let. You’ve just got to sort of grin and bear it and take a leap of faith in your­self. And more often than not, you land in a pile of shit. And you’ve got to find a way out and you’ve got to claw your way out. And I find that to be the case with just about any­one that has made it in their respec­tive careers. And hope­ful­ly we can pay that for­ward to you again.

I’ll end it on this one lit­tle ran­dom note or anal­o­gy. There’s this ter­ri­ble movie—not ter­ri­ble but—the 90s movie called Gattaca. So there’s this char­ac­ter played by Ethan Hawke, He’s this runt in soci­ety. He’s told what he can­not do. He’s told by soci­ety that he can’t aspire to great­ness because of his lim­i­ta­tions. And you know, guts is also about being an under­dog. And this movie, long sto­ry cut short, he defies the odds. He achieves his goal. Defies every­thing, even his own broth­er, who asks him how did he reach such a lev­el of suc­cess. And I could sort of tell you all sorts of weird clichés about courage and con­vic­tion, but I thought this one was most fit­ting for this sym­po­sium. He said, ​“I nev­er left any­thing for the swim back home.”

And that’s what I wish for you guys going for­ward. If you want to take it to the next lev­el, myself includ­ed, I have to remind myself that you can’t look back­wards. You’ve got to just hope that you can go for­ward, and you have to put your faith that. That some­body and some­thing, that idea, is going to take you to that next lev­el. So, let the fes­tiv­i­ties begin. Welcome, guys.

Overview page for the MAD 3 / Guts event, and this pre­sen­ta­tion

“Letter from Chang” on the mean­ing of guts.