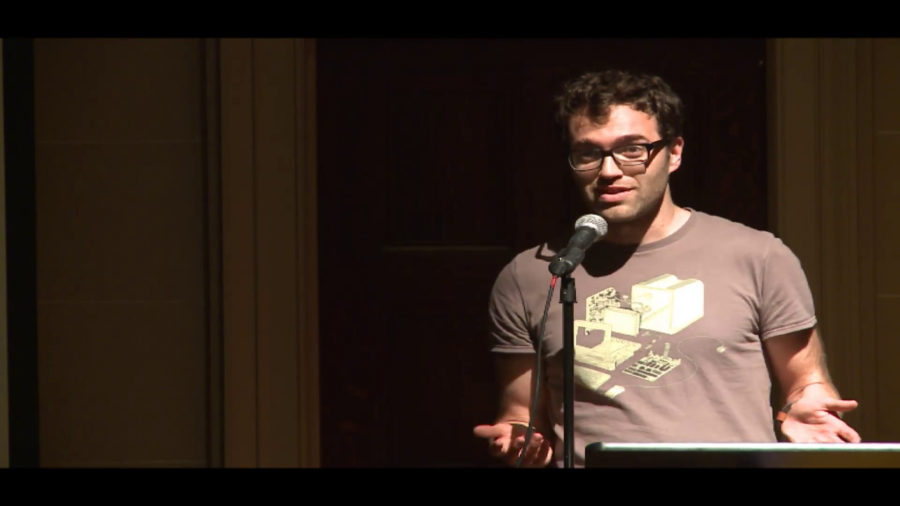 Hello. I don’t have a whole lot to say.

When I was think­ing about what I would talk about last night, I was read­ing more about Aaron. Unfortunately, I nev­er got to meet him before he died, but I real­ized that he passed away on January 11, 2013, and that was actu­al­ly the same day that I first heard from Edward Snowden.

At the time I did­n’t know that it was Edward Snowden. He was anony­mous. He sent me an email and it was encrypt­ed. And he was try­ing to get Laura Poitras’ PGP key and he was say­ing that—you know, he could­n’t tell me what it was for but I should help Glenn Greenwald learn how to use PGP and it was important.

So I helped out as I could, and it took sev­er­al months. I kept talk­ing to Glenn and Glenn was into it, but he was also real­ly impa­tient with learn­ing any­thing new on the com­put­er and he did­n’t real­ly know why it was so impor­tant. I did­n’t real­ly know why it was so impor­tant. There were a cou­ple of false attempts at teach­ing Glenn PGP, and final­ly I had a Skype call with him where I helped him set up Pidgin and off-the-record encryp­tion. That was like, five and a half, six months lat­er after I first got that encrypt­ed anony­mous email from Snowden. And that was the first time that Snowden was able to have a secure con­ver­sa­tion with Glenn Greenwald.

And I was think­ing about it. Aaron had already kind of done a lot of work to solve this prob­lem. The year, two years before Edward Snowden decid­ed to start becom­ing a whistle­blow­er, Aaron had already done a lot of devel­op­ment work on DeadDrop and was well on his way to mak­ing it so that rather than hav­ing some­one like Ed have to try and send a bunch of plain­text emails to jour­nal­ists he wants to talk to to con­vince them to learn how to use PGP and stuff, he made it so that whistle­blow­ers could talk to jour­nal­ists in less than six months. I think that was pret­ty amaz­ing. And like what Garrett was say­ing ear­li­er, the core design of DeadDrop is still exact­ly the same in SecureDrop, and that’s pret­ty amaz­ing I think that he had such good fore­sight to fig­ure out what all these tech­ni­cal prob­lems were and try and solve them.

I guess the one thing is that SecureDrop has come a very long way and it’s real­ly easy to use for sources now. So now if you’re a whistle­blow­er and you want to leak doc­u­ments, it’s real­ly easy. All you need to do is go and down­load Tor Browser, go to a web site, click ​“I’m a new source,” and upload a doc­u­ment. Then you’re done, and you don’t have to go through all of this hav­ing to be a tech­ni­cal expert and hav­ing to train the jour­nal­ists and all this stuff. But the hard part is that it’s still not near­ly as easy for jour­nal­ists to use. So, in fact, Glenn Greenwald does­n’t use SecureDrop him­self. Instead, oth­er peo­ple who have more time and patience with tech­ni­cal stuff use it and talk to him about it if there’s stuff for him.

So there’s still a lot more work to be done in this area, and I just real­ly wish that Aaron were still around to help with this, because I think that he would con­tribute great­ly on his project.

And that’s all that I have to say.