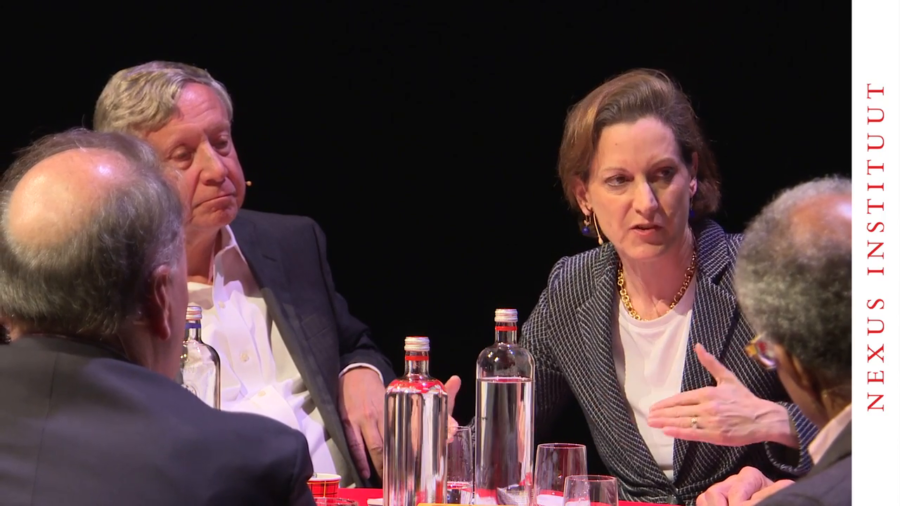 Class, Race and Poverty in the USA

Anne Applebaum: It’s also true that Americans have always accept­ed a degree of inequal­i­ty, inequal­i­ty of out­comes. What seems to have changed in recent years, or at least in peo­ple’s per­cep­tion of it, is some­thing that the gov­er­nor allud­ed to, which is that there seems to be grow­ing inequal­i­ty of start­ing place. That there’s…as long as there was a sense that okay, some peo­ple are rich, some peo­ple are poor, but at least I have a chance. I can pull myself from my boot­straps, I can work hard, I can found a com­pa­ny, I can cre­ate something—my chil­dren’s lives will be bet­ter than my life. As long as peo­ple had that sense, and also as long as they had the sense that they were par­tic­i­pat­ing in a big­ger project, you know. That the words of the Gettysburg Address you know, and the Constitution’s, those are words that belong to all of us. We don’t share every­thing, we have dif­fer­ent lifestyles, but we all are part of a sys­tem, and we can grow with it.

When peo­ple had that sense, when there was eco­nom­ic growth, when they felt there was upward mobil­i­ty, then peo­ple tol­er­ate inequal­i­ty of some kind. Inequality is a part of the human con­di­tion and peo­ple accept it. But it’s when that begins to stop when peo­ple feel that there isn’t a chance, when the start­ing point isn’t fair for every­body. And when there isn’t a chance that it will be fair or it isn’t get­ting more fair. This is when peo­ple begin to object. And this is the point that we’re com­ing to now.

Roger Berkowitz: I think Anne is right. We tol­er­ate inequal­i­ty when there’s rea­sons for it, and when it does­n’t have extra­or­di­nar­i­ly harm­ful cir­cum­stances. I think inequal­i­ty today is doing two things that it did­n’t do at all times in American history.

One…you know, the start­ing point argu­ment I think is some­thing that’s been around for a long time but it’s got­ten worse. That peo­ple are start­ing at a… The social mobil­i­ty that the gov­er­nor talked about is at low­est than it’s been in a long time.

But the oth­er is, and this is what Anne was just talk­ing about, is the loss of a com­mon sense of belong­ing to a sin­gle nation or a sin­gle project. I mean two books that came out a cou­ple years ago, one from some­one on the left and from some­one on the right… Charles Murray’s Coming Apart, which real­ly is about how the rich­est ZIP codes in America and the poor­est ZIP codes in America just com­plete­ly have a dif­fer­ent lan­guage, have a dif­fer­ent way of liv­ing, don’t talk about the coun­try in the same way and don’t expe­ri­ence the coun­try in the same way. And they don’t inter­act any­more. And he says that’s new, that’s not the way it was before. And then George Packer’s book The Unwinding about the unwind­ing of a com­mon idea of an American dream. I think these two books, in dif­fer­ent ways but in a sim­i­lar way, talk about the loss of a com­mon hope­ful project that allows inequal­i­ty to be justified.

Appelbaum: And equal before the law.

Berkowitz: And equal before the law, which is why he says that the over­rid­ing core of the spir­it of American democ­ra­cy. Right, democ­ra­cy for him is dan­ger­ous, right. Because what democ­ra­cy does is it takes away the inter­me­di­ate insti­tu­tions of aris­toc­ra­cy, which pro­tect­ed peo­ple from the tyran­ny of gov­ern­ment. And he says democ­ra­cy is hap­pen­ing. It’s a prov­i­den­tial fact and it’s gonna hap­pen in Europe and it’s gonna hap­pen in America. Equality is hap­pen­ing. Our wor­ry is how to pro­tect our­selves from the dan­ger of equality.

And his answer says the rea­son America was spe­cial and the rea­son he went to America is because of what he calls the dog­ma of pop­u­lar sov­er­eign­ty. The dog­ma of sov­er­eign­ty of the peo­ple. And he says it ris­es up out of the town­ships. It’s that engage­ment in pol­i­tics, that engage­ment that we think we can come togeth­er and do things togeth­er and con­trol our world.

Now, that’s part of the prob­lem. Because it is a messy process. It seems divi­sive to some peo­ple. We now have a diverse nation. And I would argue diver­si­ty is a strength. But there are peo­ple in the society…various lev­els, not just all wealthy peo­ple, who find this social change—and it’s hap­pened fair­ly quickly—very threat­en­ing. It is not the America they thought—if we go back to oh, the won­der­ful cohe­sive America of the 50s. Yeah, when black peo­ple could­n’t vote. Latinos mowed your lawn. You know.

Sean Wilentz: And women could­n’t get a cred­it card.

Shearer: Women could­n’t get a cred­it card. They stayed at home. That was a great time? Not for most of those oth­er peo­ple. So I think…my view. I think the coun­try’s way way bet­ter. We still have prob­lems. But I don’t think it’s in some…existential crisis.

I agree that in many respects America is…you know, there have been many advances in terms of social equal­i­ty on var­i­ous fronts. But before we get to that, I think it’s strik­ing how often when we talk about inequal­i­ty in America there’s the focus on the 1%.

I view the shame of American…you know, polit­i­cal econ­o­my as the bot­tom, not the top. I mean, you used the word mis­ery. The United States of America is a wealthy coun­try. Yet a quar­ter of young­sters in America are in pover­ty. I mean, impov­er­ish­ment in America brings social mis­ery. And there is not near­ly enough atten­tion paid to that.

Even the cur— I admire Barack Obama. I’m a sup­port­er, I admire him. Barack Obama when he’s talk­ing about redis­trib­ut­ing income in the United States does not talk about the poor. They talk to politi­cians. All of the politi­cians talk about the mid­dle class. They do not tal— Sometimes they make a mis­take and talk about the poor. But the ques­tion of pover­ty and what that means in America…denied, obscured… That, it seems to me, if we’re talk­ing about polit­i­cal econ­o­my, is where our atten­tion should be paid.

Now, obvi­ous­ly every­body’s going to be impli­cat­ed in that. But it seems to me that the ques­tion of the impoverished…for a for a moment it got atten­tion in the 1960s. For a moment. But now, the prob­lem of the impov­er­ished does not get near­ly the atten­tion that it should get in the United States.

Berkowitz: Let’s add to the impoverished—I know you care about this too—the impris­oned. I mean, which is an enor­mous… I mean, we have a high­er pop­u­la­tion of impris­oned pop­u­la­tion in our coun­try than any indus­tri­al­ized coun­try in the world. And the absence of deal­ing with either pover­ty or the impris­oned population—I think they go together—I think shows an inabil­i­ty to think about that mis­ery. People don’t want to talk about it. I don’t think there’s a good solu­tion for it, for a lot of peo­ple. I’m not sure.

Jeb Bush: So here’s an exam­ple of the world not com­ing to an end. There is a con­ver­gence on the left and right about chang­ing sen­tenc­ing guide­lines. And in Washington— This is hap­pen­ing state by state. In Washington, if it was­n’t always ​“I win, you lose,” you could have—there’s a major­i­ty of Republicans in Congress that would call for a thor­ough review of the sen­tenc­ing guidel—the fed­er­al laws. And the pres­i­dent has expressed support.

But instead of engag­ing, which is the duty of the President in this par­tic­u­lar case, he’s using exec­u­tive author­i­ty to try to solve this prob­lem on the mar­gins rather than deal with the core issue. I mean, that’s what we have to get back to, is reg­u­lar order ways where when there is agree­ment, you pause and you take a deep breath and say, ​“Oh my god. There’s a left-right con­ver­gence. Let’s deal with it.”

Now, that happens…to your point, that hap­pens at the local lev­el more often than not. It cer­tain­ly hap­pens in state cap­i­tals. It’s not hap­pen­ing in Washington, and it cre­ates this deep disaffection.

The oth­er point I want to make is if we took all of Warren Buffett’s money…and there’s a ton of it. You know, 50 bil­lion or what­ev­er he’s worth. And the FBI came in expro­pri­at­ed every asset that he owned. All of ​’em. It would­n’t change some­one who was born in pover­ty today. And so the con­ver­sa­tion needs to get far deep­er than say­ing like, the guy—I don’t even know who know he was there…the left wing guy that basi­cal­ly said effec­tive­ly the rich guy is the rea­son why peo­ple are poor.

Well, maybe not. Maybe it’s because there’s an inequal­i­ty of edu­ca­tion in America. And there are peo­ple pro­tect­ing the sta­tus quo to make sure the eco­nom­ic inter­ests of the adults are tak­en care of first rather than kids in pover­ty gain­ing a qual­i­ty edu­ca­tion. Maybe it’s the inabil­i­ty to access the first job. Which is true. And we’re cre­at­ing func­tion­al obso­les­cence for a whole lot of peo­ple that don’t have skills. You look at the automa­tion that’s tak­ing place today. It is not a joke to say if you’re born poor in America today, if there’s not a change in the path that you’re on, that you’ll nev­er get a job.

And so, these are issues that the polit­i­cal sys­tem his­tor­i­cal­ly in our coun­try has been able to pause, make adjust­ments, cre­ate the capac­i­ty for peo­ple to deal with the cur­rent chal­lenges. And we’re not doing that now, and we’re doing it at our peril.

Kennedy: I want to go back to your… You men­tioned the very first clip. And I think you’re right when you talk about…when you put front and cen­ter the race ques­tion. So I want to say some­thing about the race ques­tion and I want to link it with a num­ber of the per­son­al­i­ties that have been mentioned.

Lincoln through most of his life was very inter­est­ed in col­o­niza­tion, because he said over and over again nope, we’re not going to have a soci­ety in America where white peo­ple and black peo­ple get along as neigh­bors and are going to be on an equal footing.

Alexis de Tocqueville in Democracy in America, his chap­ter The Three Races of America, pro­found­ly pes­simistic. Said no, we’re not going to see racial democ­ra­cy in America.

In our cen­tu­ry in terms of the race ques­tion, the most influ­en­tial opti­mist is the cur­rent pres­i­dent of the United States, Barack Obama. [indi­cat­ing Bush] Now I know that you and Barack Obama have your dif­fer­ences. But. But, one thing that you actu­al­ly both agree on is that there is a— You know, he deeply believes that despite the his­to­ry of the United States, and despite the cur­rent prob­lems that con­front us, and the prob­lems are deep—we still live in a pig­men­toc­ra­cy in the United States in which the dark­er you are in the United States, the more you are at risk of the bad things hap­pen­ing to you, I don’t care if it’s incar­cer­a­tion, pre­ma­ture death, unem­ploy­ment, what have you. But even in the midst of all that, Barack Obama believes that we shall over­come. And I believe that, too. But we are being real­ly put to a tough test, and unfor­tu­nate­ly there are peo­ple who think we shall not over­come. And unfor­tu­nate­ly it’s not as if we can sneer at them and think that they’re just you know, being ridicu­lous. Unfortunately the pes­simists have rea­son to be pessimistic.