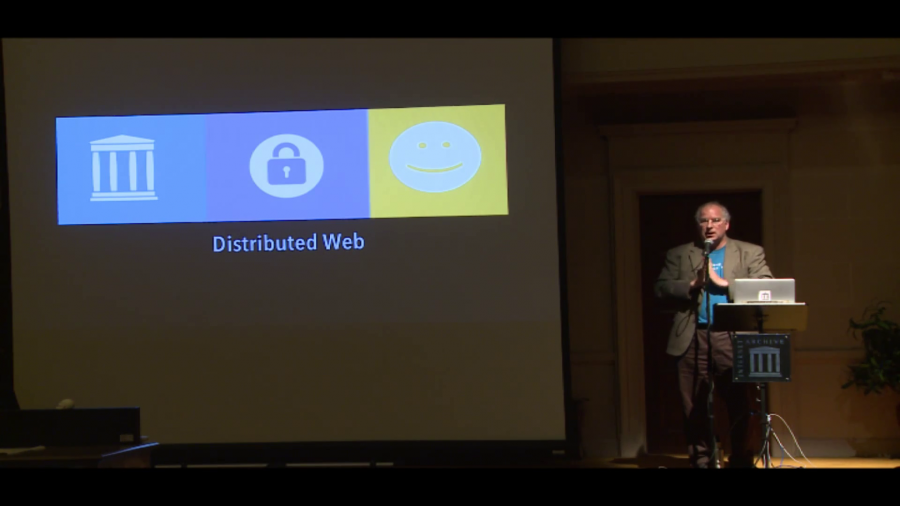 Lisa Rein: Alright. Next up is Brewster Kahle. Brewster Kahle found­ed Aaron Swartz Day with me sev­er­al years ago. We decid­ed after the memo­r­i­al that some­thing had hap­pened there. The ener­gy there was incred­i­ble, and peo­ple kept say­ing we need to do some­thing like this again, not so sad, but hav­ing the ener­gy that’s here, the ded­i­ca­tion that’s here, and do some­thing with it. So that’s how things start­ed, and the rest is kind of his­to­ry. It just gets big­ger and big­ger every year. This is def­i­nite­ly the largest one, and Brewster’s talks every year are always very amaz­ing, so I’m look­ing for­ward to this one, too.

Brewster Kahle: Thank you Lisa very much for orga­niz­ing this for anoth­er year. And a bunch of Intenet Archive staff, admin staff that’ve been doing a bunch of the stuff behind the scenes. Thank you.

And wel­come to the Internet Archive. Those are some petabytes of servers behind you, serv­ing the world as we speak. The lit­tle stat­ues are made for the peo­ple, of the peo­ple that’ve been ded­i­cat­ing sev­er­al years of their lives at least to bring uni­ver­sal access to all knowledge.

Locking the Web open. We’ve spent the last 25 years pour­ing our lives into this open Internet. Our expres­sion of who we are, what we’ve done, all sorts of stuff has been going into the World Wide Web. It’s been fan­tas­tic. Can we lock the web open?

The way the Web is cod­ed deter­mines a lot of the way we live our lives online. As Larry Lessig, my friend and hero says, ​“code is law.” So the way that we code the Web makes a huge dif­fer­ence. So does it have our val­ues in it? Freedom of expres­sion, uni­ver­sal access to all knowl­edge, pri­va­cy. Does it have that in it? Turns out, no. It’s actu­al­ly real­ly quite frag­ile, this World Wide Web that we’ve got.

But it is huge. We know this because the Internet Archive col­lects about a bil­lion pages every week (we oper­ate the Wayback Machine) and the life of a web page is only a hun­dred days between the times it’s either changed or delet­ed. So they flip on and off servers, all the time.

Also, the World Wide Web isn’t reli­able. It’s mas­sive­ly avail­able, unless you hap­pen to live in China. Or cur­rent­ly in Russia you can’t get to the Internet Archive. Or in many of these coun­tries you can’t get to the New York Times or all sorts of oth­er things. So the Internet itself and the World Wide Web is not reli­ably acces­si­ble from places.

It also isn’t pri­vate. Something that I attribute to Ed Snowden was…not attribute, it was because of Ed Snowden’s revala­tions that there was an arti­cle in The Guardian that I found chill­ing. People that were going to WikiLeaks dur­ing the Cablegate times were being watched by GCHQ. And with IP address­es, that’s personally-identifiable in a lot of cas­es. They turned these over to the National Security Agency, that then used that to be able to spy on all of those peo­ple (even American cit­i­zens) because they were of height­ened interest.

Reader pri­va­cy, for the library world, is a very very impor­tant thing because we have a dread­ful his­to­ry of hav­ing peo­ple being round­ed up for what it is they’ve read and hav­ing bad things hap­pen to them. And we have this struc­ture now, on the World Wide Web.

But it is fun. So the World Wide Web is not very reli­able, it’s not very pri­vate, but it’s fun. We have all these wacko things start­ing to hap­pen, and you can go and change it and play with it and do all sorts of inter­est­ing things. So I think we’ve done one out of three of the big issues. It’s not reli­able, it’s not pri­vate, but it’s fun.

I’d sug­gest it’s time to fix the World Wide Web. I think we can get all three of these char­ac­ter­is­tics, and I’m going to sug­gest the way to do this is by build­ing a dis­trib­uted Web. This is a call to build a dis­trib­uted Web, to lock the Web open.

What do I mean by a dis­trib­uted Web? Isn’t the Web already dis­trib­uted? You know, there are servers all over the place. But it isn’t, in the sense that if any par­tic­u­lar piece of hard­ware goes out, that thing blips out. Or, if you stand in front of it, you can watch all traf­fic to it. Or if you stand in front of you, you can go and make sure that you can’t get to any­thing, or you can lim­it what you can have access to.

Let’s take anoth­er exam­ple of a dis­trib­uted sys­tem. Amazon​.com oper­ates data cen­ters all over the world, and you can go and use them to go and host your web sites or what­ev­er, and they move the ser­vices from machine to machine to get around hard­ware prob­lems. Or if they’re start­ing to be used more in a cer­tain area of the world, they migrate these ser­vices clos­er to peo­ple. So they repli­cate more and they can move around. What if we could make the World Wide Web on the open Internet oper­ate some­thing like an ama​zon​.com that is for every­one and for free?

And what if we could try to bring read­er pri­va­cy into this in a real sin­cere way? Reader pri­va­cy turns out to be hard­er than writer pri­va­cy. Going and mak­ing it so that it’s hard to go and find who’s read­ing what, it’s inter­est­ing because it’s a flip oppo­site in the phys­i­cal world. It used to be that pub­lish­ing a book was real­ly hard to do anony­mous­ly, but you can kind of sneak it around, put it in a [mum­bles, mimes shuf­fling objects around]. You could spread knowl­edge anony­mous­ly much more eas­i­ly in the phys­i­cal world, and it’s some­what flipped oppo­site now in the dig­i­tal world.

And this time around, if we’re going to rein­vent this World Wide Web, let’s put a time axis into it in the begin­ning. The Wayback Machine is real­ly kind of a kludge gone and put onto the World Wide Web after the fact. It’s basi­cal­ly a time axis for the World Wide Web, and it’s not even bun­dled into the browsers yet. So it’s not real­ly part of the World Wide Web yet, even though it’s been around for twen­ty years. So how do we go and build the next-generation World Wide Web to fix some of these prob­lems so that it’s more like a Git, if you will. So that there would be ver­sions, and that they would be dis­trib­uted in ways.

I would also like to see if we can actu­al­ly fix some of the finan­cial prob­lems, We did­n’t put in any real mech­a­nism for mak­ing any mon­ey on the web. Even if peo­ple want­ed to pay, it’s so clunky and hard that we could­n’t do this.

So, how? Okay, that sounds all very good. Well, there are a bunch of tools that Tim Berners-Lee did­n’t have twenty-five years ago when he was build­ing the World Wide Web. For instance, the Javascript lay­er of the World Wide Web now is real­ly pret­ty impres­sive. I had my mind blown when Jason Scott and a bunch of col­lab­o­ra­tors made it so that you could emu­late IBM PCs and Macintoshes in Javascript in your brows­er, run­ning at speed. The idea that you could actu­al­ly take fif­teen, twen­ty year-old tech­nol­o­gy and run it in Javascript and dis­trib­ute it with Javascript was pret­ty amaz­ing to me. That means that we have a lay­er that we can dis­trib­ute smooth­ly and eas­i­ly that’s as pow­er­ful as, in a dis­trib­uted way, we could build and oper­at­ing sys­tem on top of it.

We also have strong cryp­to that was­n’t legal at the time to dis­trib­ute. We won that war, let’s use it. This blockchain idea of a dis­trib­uted sys­tem that can be used for nam­ing sys­tems and the like. And I’d sug­gest that Bitcoin is real­ly help­ful new tech­nol­o­gy that we can weave into our future sys­tems to make it so that if you author a par­tic­u­lar page, you’re going to have to sign that page, you might as well sign it with a Bitcoin address.

So can we go and make it so that we can basi­cal­ly fix these prob­lems? I’d like to pose a goal. I would sug­gest we want WordPress-functionality web sites, but dis­trib­uted. Can we make it so that it’s real­ly easy and fun to go and put up a web site that has dif­fer­ent themes and maybe dif­fer­ent mod­ules in it, that has peo­ple with accounts that have dif­fer­ent roles? So there are admin­is­tra­tors and there’s edi­tors and com­menters, but it has these char­ac­ter­is­tics of being pri­vate and reli­able, served from many places in a peer-to-peer struc­ture such that the web site moves, the liv­ing web site moves. 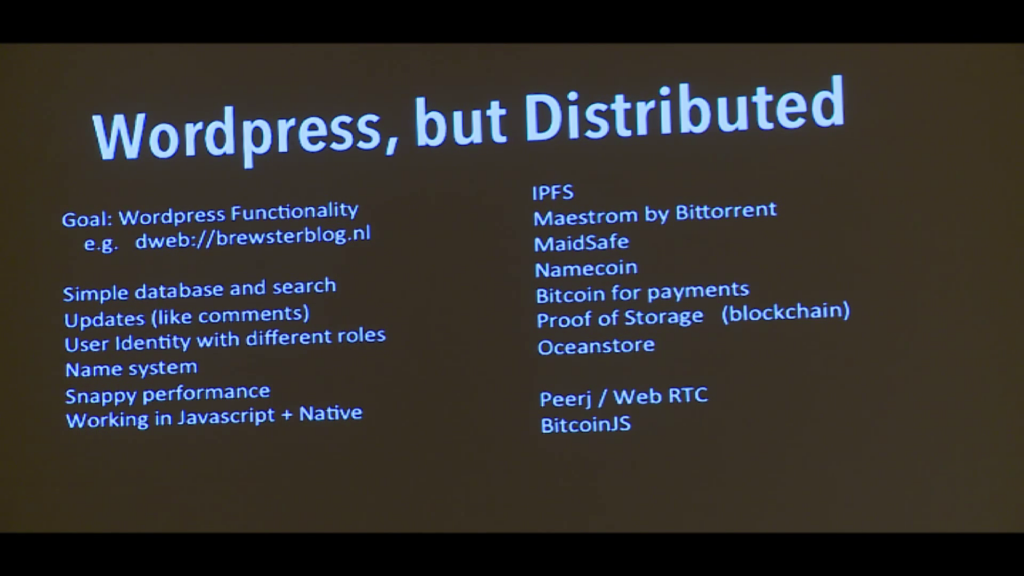 And I’d say it’s actu­al­ly pos­si­ble. There are peo­ple that are doing inter­est­ing parts of the prob­lem. There’s IPFS, there’s Maelstrom by Bittorent, there’s MaidSafe, Namecoin. There’s Bitcoin, of course, there’s proof of stor­age sys­tems that are start­ing to come out, Oceanstore, PeerJS/WebRTC.

All of these tech­nolo­gies are com­ing about. I’ve seen all of the pieces need­ed to build a dis­trib­uted Web. So I’d say it’s pos­si­ble to do. It takes a bunch of work. But to go and make it so that it’s not just wish­ful think­ing, I had a pro­gram­mer in Amsterdam take my blog from WordPress and dump it, and then try to make it into a peer-to-peer-served sys­tem. And I’m going to try to do some­thing that you’re real­ly not sup­posed to do. I’m going to try to do a live demo.

So bear with me, and you’re going to have to applaud if this works. This is a gate­way address to IPFS. IPFS is a Bittorrent-like sys­tem. It took my web blog, all of the arti­cles and indices and also even a lit­tle search engine, and put it in… Let’s see if we can get it. So I double-click and it launch­es a web brows­er. [Kahle’s blog loads; audi­ence applauds]

So that was­n’t quite how I thought it was going to come up, but here is ​“Locking the Web Open”. Here’s a blog post that’s work­ing. There’s recent posts, ​“Tower of Babel Story,” and it’s being served off of a peer-to-peer sys­tem. So there is no one serv­er, there’s actu­al­ly a lot of servers that are serv­ing this par­tic­u­lar con­tent. Another thing that’s kind of cool is it has a search engine in it. So if I search on ​“Stallman” it has search results that are dynam­i­cal­ly hap­pen­ing. So how is that hap­pen­ing? It’s a client-side app. It’s basi­cal­ly a lit­tle search engine and index that’s in Javascript that’s been down­loaded. So basi­cal­ly you can do active web sites, but you’re mov­ing them around. They’re basi­cal­ly self-contained to have all of the components.

We’ve basi­cal­ly been able to fig­ure out how to at least show it’s pos­si­ble to go and take a liv­ing, dynam­ic web site. It does­n’t have the authen­ti­ca­tion sys­tems, it does­n’t have some of the oth­er com­po­nents to it, but it’s got sort of a ​“Hello world” idea that you could go and make a dis­trib­uted Web and have it work.