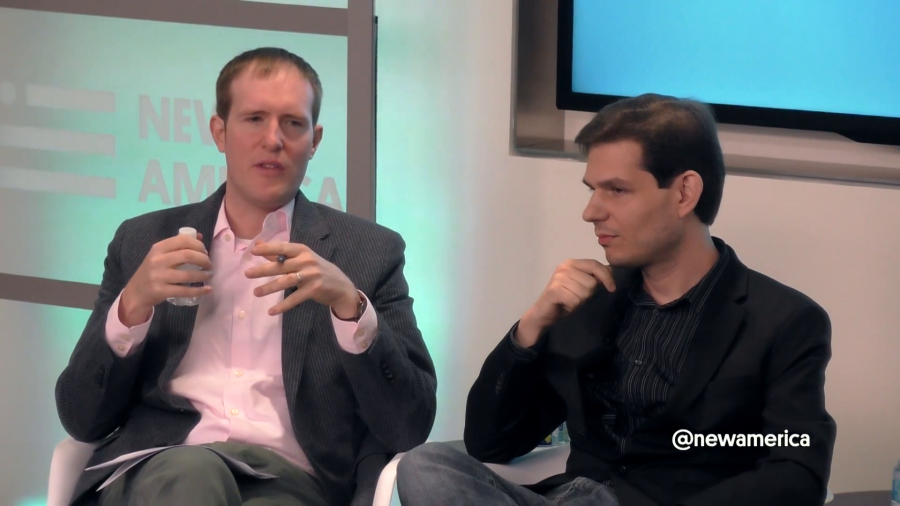 What Our Algorithms Will Know in 2100

presented by Ed Finn, Lee Konstantinou
in New America » The Tyranny of Algorithms
on 12/10/2015

[This ses­sion con­sist­ed of Lee Konstantinou read­ing a short sto­ry, pub­lished on his own site as ​“The (Tyrannical) Lives of Algorithms.” What fol­lows is a brief dis­cus­sion after­ward, between him and Ed Finn.]

Ed Finn: Thank you, Lee. That was wonderful. Okay, so is it ghosts all the way down?

Lee Konstantinou: Uh…it's history all the way down, I guess was the… If that story had a thesis (I would deny it if brought into court), I would say that it's…ghosts are a figure for path dependency, for locked-in historical processes. And the previous panel I think actually—you know the sort of irony is in fact the previous panel was quite smart on these subjects, and I think the idea that we're surrounded by these machines that we do not understand is something akin to being haunted.

Finn: Yeah, I think it's a really compelling metaphor. And it gets into a lot of the stuff that we talked about in that last panel, that we essentially create these mystical or spiritual narratives around some of these systems. And I wonder if that's inevitable or escapable. I don't know if you have a thought on that.

Konstantinou: You were mentioning in the previous panel, I think you're right to note that the logic of say, statistical analysis, or the logic of scientific inquiry, does not necessarily follow a narrative logic. And when you're narrating a story, you need actors or agents to perform actions. And our kind of rhetoric of ghosts, or the rhetoric of gods, has a very…you know, to talk about path dependency, there's a very long history of talking that way. And we inherit our language in part, and are stuck, I think, with a lot of these figures. And maybe becoming conscious about them and how they work, ripping ourselves from the familiar uses of such terms, can be part of what history does. Or learning about history does.

Finn: I was really struck as well with the notion of human drag, and the ways in which already Siri does human drag sometimes, right? When you do these jokes, or you watch the commercial where Siri's talking to Zooey Deschanel or somebody, and they're having this lively, witty, conversation. And you try and do that, it's not going to work. Unless you try really hard to summon that ghost and learn all the lines for both sides of the conversation.

But yeah, I wonder if you could reflect a little bit more on that notion of putting on a persona, that algorithms might go into human drag, but also that we are occasionally going into these sort of mixed or cyborg or computational performances as well.

Konstantinou: I don't know. I mean… You know, I'm fascinated by I guess the recent career of like, Scarlett Johannson, and the sort of casting. Some casting director somewhere is convinced that she is the ultimate figure for the posthuman, or the non-human, you know. And so there was Her, there was Under the Skin, and then that terrible but fascinating film Lucy, where she plays someone who ends up using 100% of her brain.

And so I do think there are moments when you can say things like humans are increasingly asked to behave like machines. And this was the fear with say, or the critique of Taylorism, right. Like these sort of management systems that force people to behave in certain ways.

But I think more frequently what we're ending up with are machines that are being designed to put us at ease, to to make us relax. And to ignore them, effectively. And so for me the important thing when I was composing the story was thinking about sort of everyday life, or that level of the algorithm. A lot of the science fiction I love the most is not about these big questions. You read a book like The Diamond Age and the most interesting thing in The Diamond Age is the mediatronic chopsticks, the small detail that Stephenson says okay, well if you have nanotechnology, people are going to use this technology in the most pedestrian, kind of ordinary ways.

And so, right. Maybe right now we're confronting a near future where computation is becoming more and more visible, more and more present. But then at a certain point it's going to start to disappear.

Konstantinou: I mean, I think that's already… Yeah. You noted like with Siri and with other systems like this, it's already happening. And to some degree, most— Like, I give my laptop to my parents, for instance, and they're not sure what to do with it. But I give them the iPad and they seem to have a kind of intuitive sense of how to use it. And so I think it's true that increasingly the kinds of systems that will dominate our lives are the systems that are studiously kept from our view, in some ways.

Finn: Lee, thank you so much.

If you found this useful or interesting, please consider supporting the project monthly at Patreon or once via Square Cash, or even just sharing the link. Thanks.

If you find something here useful or interesting, please consider supporting the project monthly at Patreon or once via Square Cash, or even just sharing a link. Thanks.