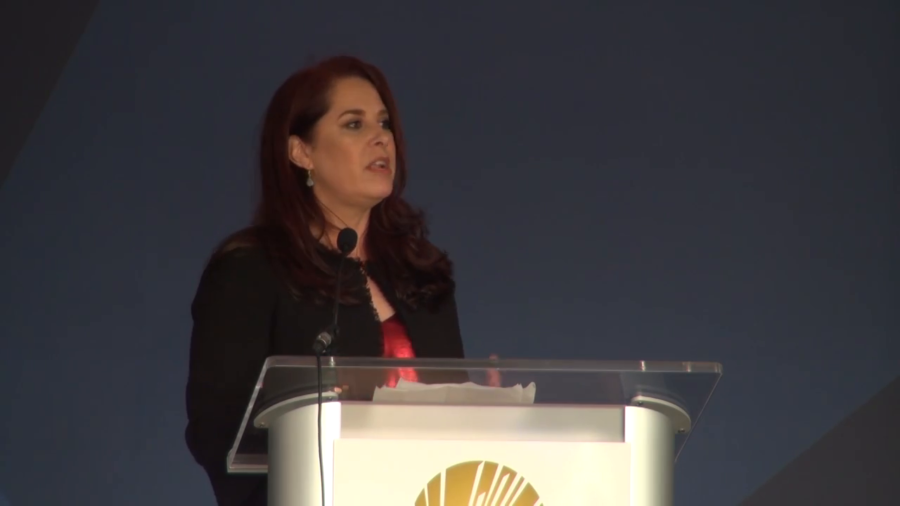 Tracy LaQuey Parker: Thank you to the Internet Society. I am hon­ored to be induct­ed into the Internet Hall of Fame. I know and have worked with a num­ber of the pre­vi­ous inductees, and I’ve spent some time learn­ing about the amaz­ing accom­plish­ments of this year’s inductees. I’m incred­i­bly proud and hum­ble to be a part of this group.

I often think back to my life before I start­ed using the Internet. Well basi­cal­ly I had a life. But once I sat down at a Sun work­sta­tion at the University of Texas in 1988, I was com­plete­ly hooked. And I’ve been addict­ed ever since. I thought I was the luck­i­est per­son on the plan­et to have that job. Because send­ing email to peo­ple all over the world was just about the coolest thing I had ever done. And I still think it’s amaz­ing, almost thir­ty years later.

Did I envi­sion what the Internet was going to be when it grew up? Absolutely not. But I always felt, deep down, well before the Web was invent­ed, that the Internet was some­how going to be huge. And that it would have a pro­found effect on every­one’s lives, and I want­ed every­body to know about it. That’s what drove me to pro­mote it, to explain it, and to push for ways that it could be used by every­one, not just the researchers, com­put­er sci­en­tists, and engi­neers. And I had so much fun. I trav­eled the world. I worked with many tal­ent­ed peo­ple. And I made a lot of friends, many of whom I’m still friends with today.

The Internet is suc­cess­ful because of col­lab­o­ra­tion and I’m grate­ful that I was a part of this con­tin­gent. I owe a great debt of thanks to every­one who sup­port­ed me. They gave me the free­dom and encour­age­ment to exper­i­ment and take risks. I’d like to thank a few of these peo­ple, but my list is by no means exhaustive.

First I have to cred­it my Internet ​“push­ers,” Stuart Vance and Phil Bard, who hired me at the University of Texas to cre­ate net­work infor­ma­tion ser­vices for the UT cam­pus, the Texas Higher Education Network, and the Texas Education Network.

I want to acknowl­edge the sup­port and inspi­ra­tion dur­ing the time I worked on The User’s Directory of Computer Networks and The Internet Companion from so many peo­ple includ­ing John Quarterman, Laura Fillmore, Vint Cerf, Jeff Houston, Susan Estrada, and Cathy Aronson.

And while I was at Cisco Systems, I ben­e­fit­ed tremen­dous­ly from the men­tor­ing a Steve Wolff, Ed Kozel, Gary Kunis, John Morgridge, and Kate [Meither?].

Finally I want to thank my fam­i­ly. My par­ents, who hap­pen to be here tonight, Alan and Sherry LaQuey. My chil­dren Harrison and Henry. And my hus­band Patrick Parker, who is also here. Patrick played a key role behind the scenes, and with­out his sup­port I could not have accom­plished what I did.

In clos­ing, I have always admired the Internet’s open struc­ture, which pro­vides the oppor­tu­ni­ty for every par­tic­i­pant to be a peer, and has allowed the Internet to con­tin­ue to evolve. The Internet imple­menter’s creed defined by the great Jon Postel in RFC 793 has been a guid­ing rule and pro­to­col design, and states ​“be con­ser­v­a­tive in what you do, be lib­er­al in what you [accept] from oth­ers.” I think this con­tin­ues to be won­der­ful advice for both the Internet and for life in gen­er­al. Thank you again.