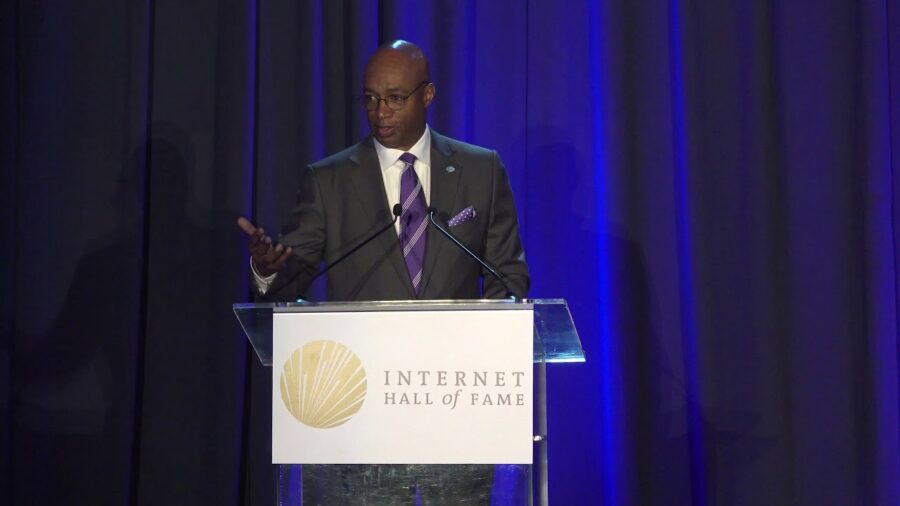 Larry Irving: Members of the Internet Society, dis­tin­guished guests, friends, it’s an hon­or to be here and I want to thank the Internet Society and advi­so­ry board for select­ing me. And I also have to thank a cou­ple of peo­ple start­ing with President Bill Clinton and Vice President Al Gore, and late Secretary of Commerce Ron Brown. In 1993 they found a…not just a non-engineer but a lawyer. And not just a lawyer but a mass media broad­cast lawyer. And gave me the charge of help­ing to devel­op poli­cies for the United States with regard to how we were going to move for­ward on Internet pol­i­cy. Our cre­do was putting peo­ple first, which stacks very nice­ly with what Andrew talked about, the Internet is for every­one. And every day we were try­ing to fig­ure out what could we do that would bring the Internet to everyone.

I am a proud grad­u­ate of Northwest University and of Stanford University in the United States, and I was out in Palo Alto and Cupertino. And I was with Secretary Brown, we went down to Cupertino, the home of Apple Computer, and we saw these chil­dren around desks, and they each were around a net­work com­put­er. And they were hav­ing a great time. Later that day, we went up to a low-income com­mu­ni­ty in San Francisco called Hunters Point. They were poor stu­dents, they were pre­dom­i­nant­ly minor­i­ty stu­dents. They did­n’t have a clue that a thing called the Internet existed.

And from that came our deci­sion that we were going to study the dig­i­tal divide. We knew that in order to move pol­i­cy in the United States and across the plan­et we had to under­stand who was on, why they were on, who was­n’t on and why they weren’t on. And then we had to devel­op poli­cies that would bring all of these peo­ple to the net.

Now as every­one has said today, the Internet is a col­lab­o­ra­tive effort. Nothing hap­pens in Internet pol­i­cy with­out a whole bunch of peo­ple putting their shoul­ders to the wheel. I was for­tu­nate. I had boss­es such as Dave Barram, the deputy sec­re­tary. When I did my first study work­ing with the Census Bureau in the United States and we did a 50,000-person study, my good friend who’s also from Queens New York Everett Ehrlich was the Undersecretary of Commerce and helped me put that study together.

Many of you know the bril­liant Laura Breeden. Others of you know Bernadette McGuire-Rivera. You may not know Becky Burr but you should. Roanne Robinson, my deputy Tom Sugrue, Jim Wasilewski, Kelly Levy, Jim McConnaughey, and Wendy Lader, who put togeth­er the first Falling Through the Net stud­ies. There were so many more but every­thing we did was a col­lab­o­ra­tive effort.

I want to con­grat­u­late my fel­low inductees. But I want to give a spe­cial grad­u­a­tions my long­time friend Dan Lynch who is not going to be us tonight, who’ll be on a lit­tle lat­er. And over the last cou­ple of days I’ve met peo­ple who I’ve inter­act­ed with over the— Jean and I have met online for years and have nev­er met, and I’ve met oth­er here we’ve inter­act­ed— Adiel and I have a joint inter­est with the Leland project had nev­er met but our foun­da­tions are with that great project.

So I’m hon­ored to be here today. In 1993 when we first start­ed talk­ing about the dig­i­tal divide and doing the work to define the dig­i­tal divide, there were 15 mil­lion peo­ple on this plan­et on the Internet. Today there are 4 bil­lion. A lot of peo­ple in this room did a lot of work to make that hap­pen. But we have a lot that we need to do still. This is the most trans­for­ma­tive tech­nol­o­gy of our life­times. It is cer­tain­ly good tech­nol­o­gy that has reach more peo­ple more rapid­ly than any tech­nol­o­gy in the his­to­ry of this plan­et. We’ve done a lot of good work. But we’ve got a lot of work left to do.

Just in my home coun­try the United States…just look­ing at chil­dren. There are 3 mil­lion stu­dents in the United States who are school-age who go home to no Internet. One out of sev­en kids in America don’t have broad­band at home, in a coun­try we have a about a 90% Internet pen­e­tra­tion. Jessica Rosenworcel the FCC com­mis­sion­er called that the ​“home­work gap.” And it’s a gap that we’ve got­ta close.

Globally, you look at the front page of the Internet Society today, 51% of the plan­et is con­nect­ed. That means 49% aren’t con­nect­ed. And that’s going to be the hard­er 49%; the low hang­ing fruit has already been gathered.

I can’t believe that we’ve come this far, and I can’t believe how far we’ve yet to go. I want to con­tin­ue to work to con­nect peo­ple and I’ve been read­ing what Tim Berners-Lee is talk­ing about, not only con­nec­tions, but mean­ing­ful con­nec­tions. We’ve got to make sure that when peo­ple are con­nect­ed they’re doing things that enhance their lives and enhance the lives of the peo­ple they live with and love. That’s what the Internet Society’s all about. It’s what my work dur­ing my career has been all about.

My wife Leslie recent­ly grad­u­at­ed from divin­i­ty school and she’s here with me tonight, a lit­tle under the weath­er. So maybe it’s appro­pri­ate that I close with a bib­li­cal verse. Galatians 6, chap­ter 9: Let us not become weary in doing good, for at the prop­er time we will reap a har­vest if we do not give up. Adiel said some­thing very sim­i­lar in his state­ment this after­noon. Everyone here tonight has put their shoul­ders, worked against odds, to make this a bet­ter plan­et. To make the Internet a real­i­ty for all of our fel­low cit­i­zens. That’s the theme that we’re work­ing with. It seems a prop­er direc­tion for the path ahead. Thank you very much.