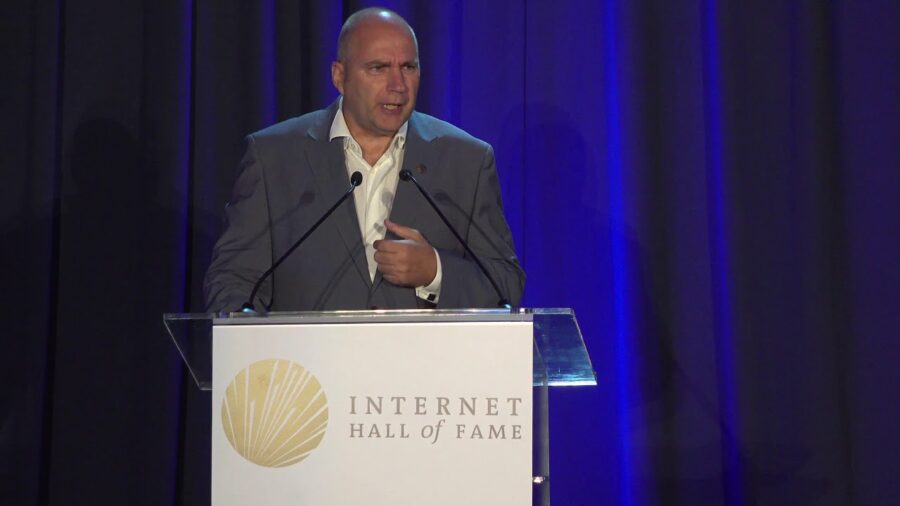 Klaas Wierenga: Buenas noches. Good evening. I should start with an apol­o­gy to my ten­nis team. In a few hours they’re going to play a com­pe­ti­tion match and I’m stand­ing them up. I trust they under­stand why.

When I received the email that I was nom­i­nat­ed, first of course I thought some­body was play­ing a nasty trick on me. But when I start­ed to believe it was real, I went to the web site of the Hall of Fame and looked at pre­vi­ous inductees. I know a num­ber of them. I know of a lot of them. But what struck me most was that there were so many peo­ple that I’ve worked with through the years and that are incred­i­bly tal­ent­ed and that have done so much to advance the Internet that are not in that list. And I guess I’m very lucky that the peo­ple that nom­i­nat­ed me and the advi­so­ry com­mit­tee decid­ed that I was wor­thy of this honor.

I think I’ve been lucky through­out my career, start­ing with Robert Janz at Groningen University. Later Hall of Famer Kees Neggers at SURFNet. Jane Butler at Cisco. And anoth­er Hall of Famer Erik Huizer first at SURFNet and now already for a few years at GÉANT. And I’m very grate­ful to have had the luck to work with them, being stim­u­lat­ed to look at new things, to always look for ways to improve the Internet.

I’m also stand­ing here a lit­tle bit with mixed feel­ings, I have to say. I’m very proud of hav­ing had the idea of Eduroam. At the same time, I don’t con­sid­er myself as the one that con­tributed most to the advance­ment of Eduroam. There are many out there. And I’m going to men­tion a few names.

To start with, Paul Dekkers, who came as a stu­dent to me and asked if I had an idea for a grad­u­a­tion assign­ment. And he then built the first proof of con­cept and is still around, almost twen­ty years lat­er and very much involved and actu­al­ly the cur­rent chair of the glob­al Eduroam con­fer­ence committee.

There is Licia Florio, who was at the time TERENA, now GÉANT, and who did a lot to bring Eduroam out­side the Netherlands and to the rest of Europe. Later on she took one for the team and agreed to mar­ry me, and she’s the moth­er of our our daugh­ter Lara.

Miroslav Milinović, who turned Eduroam from a play­thing for nerds into a true ser­vice that can real­ly be used by stu­dents all over the world.

And last but not least, Stefan Winter who is the tech­ni­cal man behind all the Eduroam devel­op­ment in the past ten years or so and who has con­tributed tremen­dous­ly to mak­ing sure that Eduroam was fit for purpose.

But as I said, it is the work of many many, by now thou­sands of peo­ple. And I think that is for me the most impor­tant thing and that’s what I’m most proud of. That is that there is no cen­tral author­i­ty. There’s no cen­tral insti­tu­tion that made this hap­pen across the world. This is real­ly, tru­ly a grass­roots thing where peo­ple all over the world decid­ed to make their own resource, their own net­work, avail­able and throw it in the big pool for the greater good of all. And I think that is some­thing that I’m very proud of. I think it is some­thing that the R&E com­mu­ni­ty is still very good at. Not so much com­pe­ti­tion but more col­lab­o­ra­tion. And I think the Internet needs a lot more of that, espe­cial­ly in these times where gov­ern­ments make it a habit to spy on for­eign­ers and their own people.

If I can make one wish for the future, then I think it is to those of you out there that have ideas to make the Internet just a lit­tle bit bet­ter, just a lit­tle bit safer, just a lit­tle bit more user-friendly, to go after it and do it. Don’t think about how big some­thing may become. That’s usu­al­ly not how it works—it was def­i­nite­ly not the way it worked for me. I was just try­ing to solve my own prob­lem, and that I helped oth­ers with it was just very nice.

And if you are in the posi­tion to sup­port some­body that comes to you with one of those at first glance small ideas, then please sup­port them. Don’t ask imme­di­ate­ly where the billion-dollar mar­ket is. Don’t imme­di­ate­ly ask how that’s going to make you a lot of mon­ey or lots of patents or what­ev­er. But try to help them, encour­age them in try­ing things out, and make the Internet a bet­ter place. Thank you.