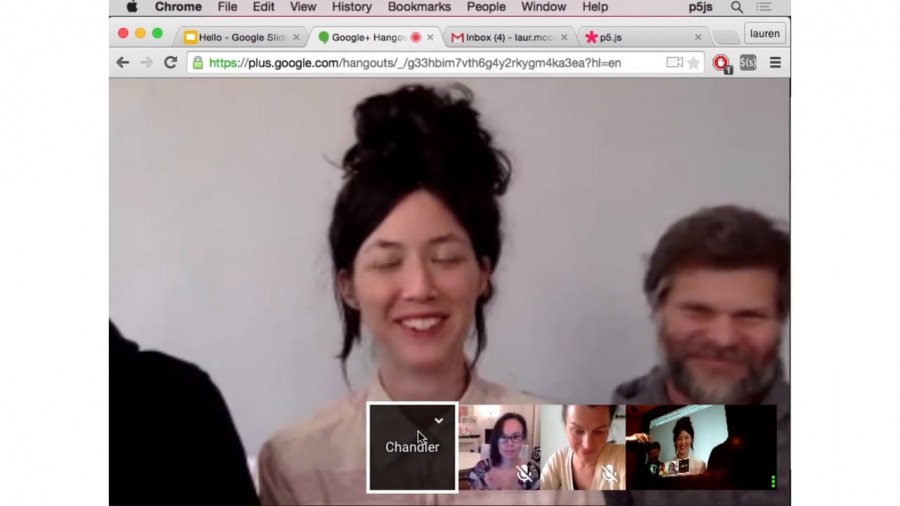 presented by Johanna Hedva
in STUDIO for Creative Inquiry » Diversity: Seven Voices on Race, Gender, Ability & Class for FLOSS and the Internet
on 05/26/2015

My name is Johanna and I’m here in the capac­i­ty most­ly in my role as the Assistant Director of the Processing Foundation, but my true col­ors are as an artist and I want­ed to begin my talk by mak­ing a con­fes­sion that I am a total out­sider to your com­mu­ni­ty in the sense that I don’t usu­al­ly code. I want­ed to give you a lit­tle sto­ry to locate me, and how I got to where I am today in being part of this com­mu­ni­ty but from a dif­fer­ent perspective. 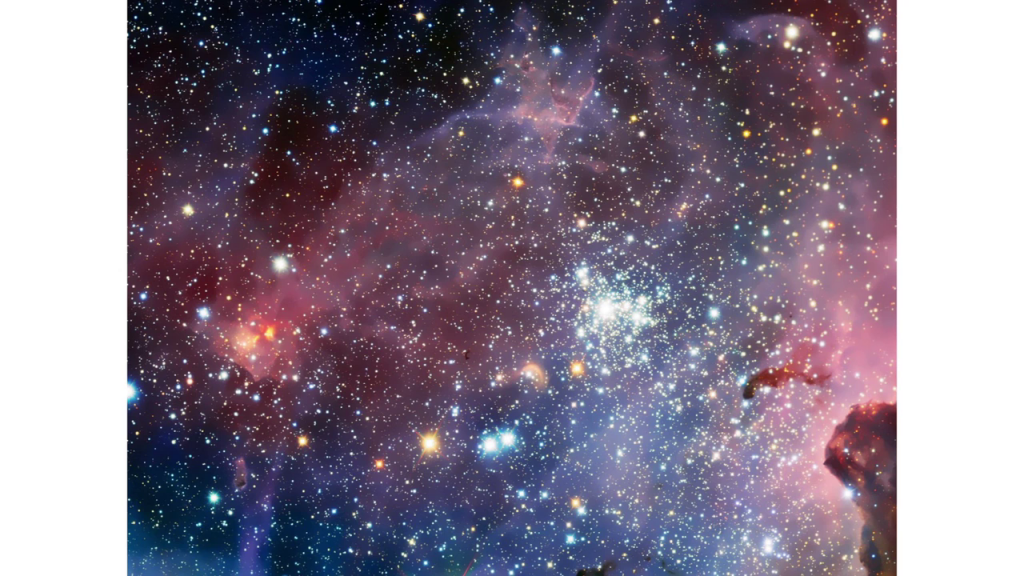 Before I got an MFA in art, and before I got a BA in design at the Department that Casey and Chandler [inaudi­ble] where I met Lauren, I decid­ed to start my col­lege career study­ing astro­physics at the age of 22. I was out of school for about six years, and dur­ing that time I was in a punk band and worked at a news­pa­per and did a lot of art things. But I decid­ed to go back to school to study physics and specif­i­cal­ly astro­physics because I was so excit­ed about the pos­si­bil­i­ties there. And I just want to relay this one anec­dote that sum­ma­rizes my expe­ri­ence in the physics depart­ment at this city col­lege where I was.

I had to take a Java class. This was about ten years ago and it was required for my major. I was the only woman in the class and I was def­i­nite­ly the only woman who ever went to the com­put­er lab to get help with my home­work from the tutors. One day I went in and I had scrib­bled on a note­book what I thought could answer this prob­lem that I had to do, in code. I’d kind of sketched out my code by hand, and took it into the tutor. The tutor looked at me and then looked at my code and then looked back and me, and he just said, ​“You did­n’t write this. You could­n’t have writ­ten it. Where did you get it?” And I tell you that sto­ry because it’s sort of to me the sum­ma­ry of most of my expe­ri­ence work­ing in the com­put­er sci­ence and physics depart­ments at that school.

And my com­par­i­son is that when I went to UCLA and trans­ferred into the design depart­ment, I had the com­plete oppo­site expe­ri­ence. I took my first Processing class, and I felt accept­ed and invit­ed and that access to all kinds of dif­fer­ent tools and tech­nolo­gies there for me.

So I think that my expe­ri­ence as an out­sider and as an oth­er in gen­er­al is an inte­gral part of how I approach this. And in intro­duc­ing this talk and the Processing Foundation’s role in it, I think of this anal­o­gy of riot grrrl. I was a riot grrrl. I was a lit­tle bit too young to ful­ly be a par­tic­i­pant at the height of it, but I def­i­nite­ly con­sid­ered myself one and was incred­i­bly influ­enced by this move­ment. And now that Kathleen Hannah and I are both old­er, we’ve rec­og­nized that riot grrrl did­n’t do such a good job at the begin­ning of being acces­si­ble to women of col­or. This is some­thing that, I’m a woman of col­or who is white pass­ing, and I think about this a lot, what kind of access to spaces I’m allowed because I pass. And I’ve heard Kathleen Hannah talk very well in pub­lic now about being crit­i­cal lat­er in a move­ment about your blind spots and mis­takes in your beginnings.

When I think about the Processing pro­jec­t’s moment in time being fif­teen years into its tra­jec­to­ry, I’m notic­ing that maybe in the begin­ning there weren’t so many explic­it [inaudi­ble] in our artic­u­lat­ed mis­sion to ​“diver­si­ty.” I think that the out­sider and the oth­er and the access that was allowed to these types has always been inher­ent in the project, and that’s some­thing that I am drawn to. And I think that riot grrrl is a good exam­ple of see­ing how a move­ment can be crit­i­cal of its ori­gins and apol­o­gize and be hum­ble as it goes for­ward. So I take great hope from that. 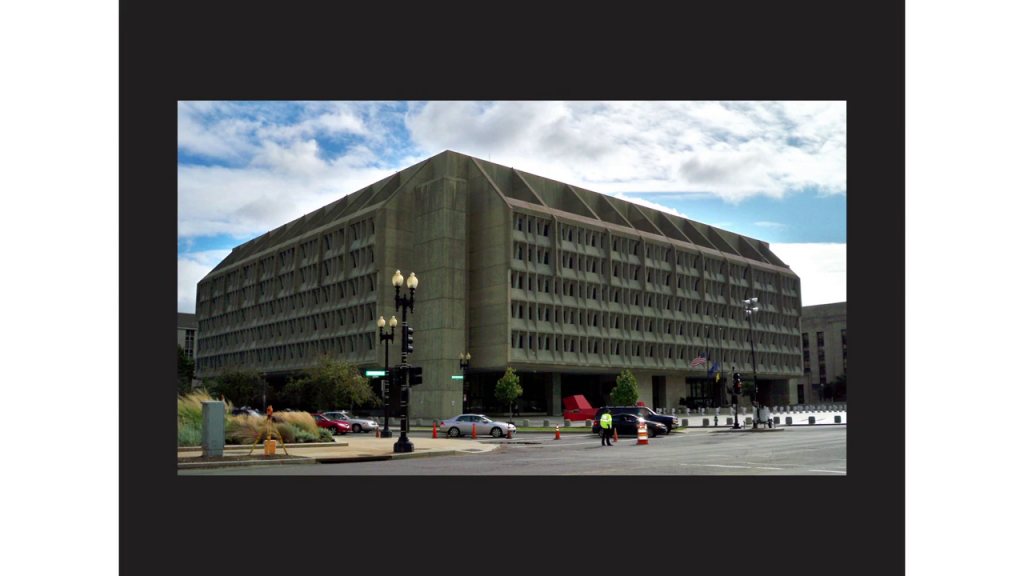 The last thing I want to talk about is my place right now. It’s very bizarre to me to be part of what I con­sid­er to be an insti­tu­tion. This is anath­e­ma to a punk, that you would ever be part of an insti­tu­tion. I always think of this kind of a build­ing when I think of insti­tu­tions, and I’ve always that that the def­i­n­i­tion of an insti­tu­tion would be that which no longer changes. The norms, the cod­i­fi­ca­tions of nor­ma­tive behav­iors or actions, is what makes you an institution.

But I recent­ly had to con­front this def­i­n­i­tion that I had that was very sus­pi­cious of author­i­ty when I took a Merleau-Ponty class in grad­u­ate school. He had an idea of the insti­tu­tion that was dif­fer­ent, that I want to take up as an offi­cial Processing Foundation mantra, which is that an insti­tu­tion is defined by hav­ing to con­stant­ly re-institute itself. That means a con­tin­u­ous process of growth, and change, and crit­i­cal­i­ty, and self-awareness. I think that when we think about an insti­tu­tion that can grow and learn from its mis­takes and have new goals, that’s incred­i­bly excit­ing to me.

I want to go back to this slide because I could­n’t think of a good slide for the future, and I thought it was a good metaphor to put in the vast­ness and poten­tial of space, and still the unknow­ing place that we have in it, and our enthu­si­asm and hope for dis­cov­er­ing new things.

Overview page at the Studio for Creative Inquiry’s web site.