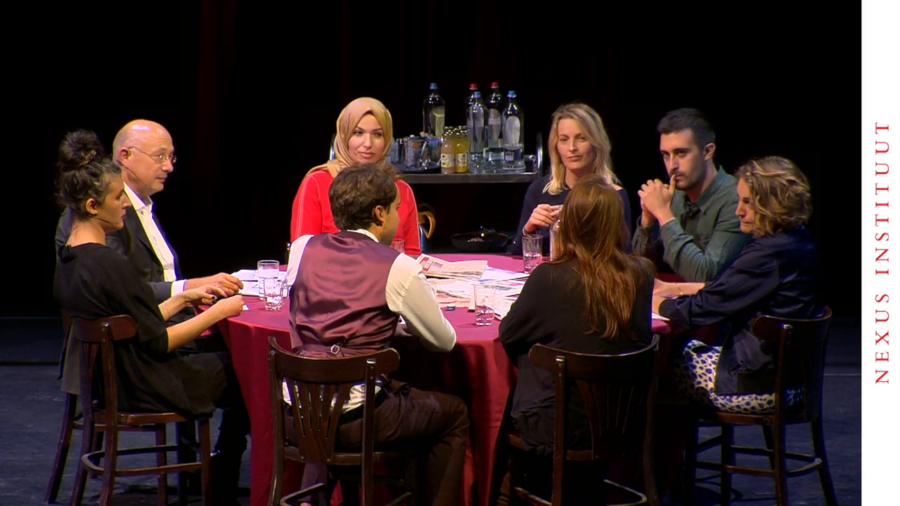 How Should We Do Politics?

Rob Riemen: What are your most press­ing con­cerns about the polit­i­cal world in which you are liv­ing? Flavia, you can start.

Flavia Kleiner: Maybe the first thing to refer also to Der Zauberberg is that to me the big prob­lem starts with the fact that Hans Castorp lives for sev­en years in a par­al­lel world, right. So he’s in this super closed world, with impuls­es, of course, impuls­es, dif­fer­ent ones. But you know, it seems much big­ger than it should be and you know, what­ev­er like, he’s total­ly nar­rowed down to this…parallel world. And I think if I relate this to today’s world, I think a democ­ra­cy can­not bear that many par­al­lel worlds.

The biggest prob­lem, and I see it a lot among young peo­ple, is that they some­how just want their safe spaces. They don’t want to…like, they want to be mind­ful, they want to be self-fulfilled… It’s total­ly deca­dent. It’s because we are so well-off in the Western soci­eties and things are going so well, I don’t bear it any longer. I think they’re miss­ing the true changes going on abroad and out­side of our ​“lit­tle” nice, cute worlds.

My biggest teacher, actu­al­ly, in pol­i­tics was my own moth­er, who was a com­mu­nal politi­cian for six­teen years. And she you know, every Saturday she dragged us kids with her on some farm open­ing or, I don’t know you know, what­ev­er, some shop open­ing. And we went there, tak tak tak tak tak, and then she says, ​“Okay. Talk to this guy,” tak, and she was away. And so we just had to get used to talk to any per­son from any back­ground. And what I expe­ri­enced is that many many peo­ple don’t have this. They’re not used to this any­more. And some­times I really…I know…you know. But I feel ashamed how far away the elites [air quotes] got from…just the nor­mal, aver­age per­son. And if we say that we want to live in a democ­ra­cy togeth­er, we sim­ply are accept­ing the fact that a Nobel Prize win­ner has the same voice as every oth­er cit­i­zen, you know. And that’s what is annoy­ing me a lot and that’s what makes me fear a lot. Because we should real­ly get out of this sit­u­a­tion. [audi­ence applauds]

Celeste Marcus: I think it’s true that… I don’t know if this is like…I don’t want to speak about this as if this is only a con­tem­po­rary prob­lem. I think that this is a human prob­lem. I think that pol­i­tics has always been sus­cep­ti­ble to con­ver­sion so that it’s not actu­al­ly about liv­ing peo­ple it’s about sig­nal­ing mem­ber­ship with­in a par­tic­u­lar com­mu­ni­ty. I think that has always been true. I think that tech­nol­o­gy has changed the way that that man­i­fests now, but I think that it’s always been true that when peo­ple align them­selves with their par­tic­u­lar polit­i­cal ide­ol­o­gy, it is less because they’re con­scious of the prac­ti­cal ram­i­fi­ca­tions of like, the poli­cies that are con­sis­tent with that ide­ol­o­gy and more because their friends and their fam­i­ly, or their teach­ers espouse that phi­los­o­phy and they admire the peo­ple who say it and so they want to be part of that group.

And I agree with you that like, the only way to under­stand the ram­i­fi­ca­tions of pol­i­tics and the stuff of pol­i­tics is human life, so you have to go out and see what human life actu­al­ly looks like, not just the life that you’ve been born into but every oth­er kind of life.

The only thing that I would dis­agree about is that I don’t think only elites are guilty of this. I think that it’s not like one real­i­ty is more real than anoth­er just because it’s poor­er, or hard­er. I think that every sub­group is guilty of the same impulse. Because like, we hap—I hap­pen to be a mem­ber of the elite. I know I’m very lucky to have been priv­i­leged such that I don’t feel pol­i­tics in the same way that some­body who’s born dirt poor on the street does. But they don’t know what it is to live the life that I’ve lived just like I don’t know what it is to live the life that they’ve lived. And I think it’s dan­ger­ous to talk about some­body else’s real­i­ty as if it’s more real just because it’s harder.

Joan Magrané Figuera: Maybe it’s because I was born in a lit­tle coun­ty inside a big­ger state, I have always felt more close with the lit­tle things. And I talk about inti­ma­cy in terms of art. And I think in pol­i­tics it has to be the same. Because maybe peo­ple feel pol­i­tics like some­thing far because they are talk­ing pol­i­tics all the time—[buròcrates?]—about big things, big ideas, big orga­ni­za­tions, big blocks. And no, the more impor­tant is the human scale, the human mea­sure, and the diver­si­ty of voic­es. And democ­ra­cy is a polypho­ny, nev­er a uni­son. For me I think it’s like [motza?], music. It’s an absolute fan­ta­sy in terms of melod­ic— The rhythm is always flex­i­ble. There’s lots of orna­men­ta­tion. That’s democ­ra­cy, not this path we are fol­low­ing to uni­form blocks. I don’t know.

Wojtek Wieczorek: We haven’t devel­oped a lan­guage to talk about big com­mu­ni­ties. That’s the prob­lem. Like in a sense… Of course pro­pa­gan­da has always been accom­pa­ny­ing peo­ple as long as the com­mu­ni­ties were here. Hate is rather a new way of express­ing lan­guage. But when we’re talk­ing about cli­mate change for instance, like lan­guage is so inca­pable of describ­ing what’s hap­pen­ing. It’s like you want to write some­thing about cli­mate change and then you ask your­self a ques­tion, is it a cat­a­stro­phe? Now like, a cat­a­stro­phe is some­thing that hap­pens once. After sev­en years it’s no longer a cat­a­stro­phe. We have a cri­sis. Crisis is resolved with­in the bor­ders of a state, like the Greek cri­sis for instance. Then you’ve got a prob­lem. Like, it’s not a prob­lem. Like I might have a prob­lem with a too-tight shirt. But like, it’s not a prob­lem so like, where are the words to describe what’s happening?

Intissar Kherigi: I do feel that there’s some­thing about the way that pol­i­tics is done which turns peo­ple off Europe and turns young peo­ple off pol­i­tics, which is the tech­no­crat­ic way that pol­i­tics is car­ried out. And you know, I think maybe our gen­er­a­tion had a kind of polit­i­cal awak­en­ing because of these mas­sive life-changing moments like the finan­cial cri­sis, 9‍/‍11, war in Iraq. So many dif­fer­ent things. But before that, I think a lot of peo­ple were dis­en­gaged because of the way pol­i­tics is done. I think the whole rep­re­sen­ta­tive demo­c­ra­t­ic sys­tem has to devel­op new mech­a­nisms for actu­al­ly engag­ing peo­ple. And I think you find that when it does offer new mech­a­nisms, peo­ple are interested.

So for exam­ple if you look at the prac­tice of cit­i­zen’s con­ven­tions or cit­i­zen’s assem­blies, where they’ve been done peo­ple come for­ward. They’re inter­est­ed. You know, tens of thou­sands of peo­ple volunteer.

Kherigi: My expe­ri­ence in Tunisia as well is that you know, I work with the most dis­en­gaged young peo­ple who don’t even believe in democ­ra­cy. And I work with them for two years, and after­wards they stand for elec­tion in a demo­c­ra­t­ic sys­tem. And so I think it’s about cre­at­ing spaces, and about not see­ing democ­ra­cy as a prod­uct that’s going to be con­sumed by cit­i­zens who are sit­ting there, but a dynam­ic sys­tem that has to con­stant­ly look for new ways to con­nect with peo­ple when things are chang­ing. When we have tech­nol­o­gy, and cul­tur­al change. We cannnot expect demo­c­ra­t­ic insti­tu­tions to remain untouched. They have to change the way they engage with citizens.