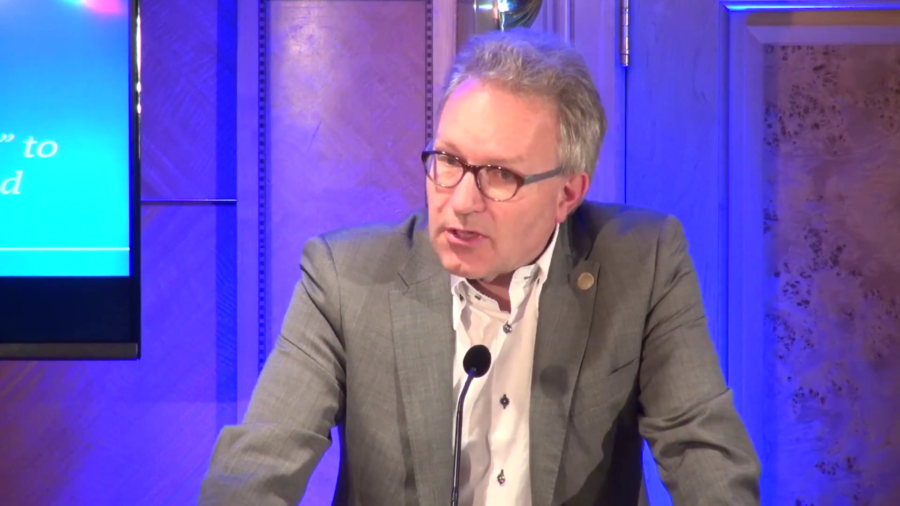 Erik Huizer: Well, I nev­er thought I’d stand here and then have to say a thank you word in the same way that the Oscar win­ners do. I will thank my moth­er but I’ll do that a lit­tle bit later.

I learned today a cou­ple of things. I’m a music lover and I learned two things today. One is imme­di­ate­ly when the news was announced on Twitter, some­body said to me, ​“Do you know that will.i.am has a num­ber that is called ​‘Hall of Fame?’ ” So that’s some­thing we should try and and lis­ten to tonight. The oth­er one of course is that I final­ly got the mean­ing of the Oasis num­ber ​“Standing on the Shoulders of Giants,” because as has been said before that’s how I feel I am here.

It was 1987. I had just fin­ished my PhD, dur­ing which I had imple­ment­ed the IP pro­to­col on some PCs. And my boss, to whom I owe very much, Kees Neggers at that time— Kees Neggers also, by the way, is also an inductee in the Hall of Fame. He sent me off to an Internet meet­ing in Boston, and I arrived in Boston in a hotel, checked in, came down­stairs, and feared what shall I do for din­ner? And there I ran into Vint Cerf, who did­n’t know me of course, but I knew him. So I bold­ly intro­duced myself, and Vint said, ​“Hey, you wan­na come to din­ner?” And I said, ​“Well yes, please.” So he shoved me into a cab, and I turned around and I was sit­ting besides Jon Postel, Steve Crocker, and in front was Vint Cerf. The rest, as they say, is history.

So let me start by thank­ing a cou­ple of peo­ple. First of all my par­ents, with­out whom I would­n’t be here. And they always inspired me to to think inde­pen­dent­ly, and I think that’s one of the main things you can teach your chil­dren. Of course my fam­i­ly. I’ve been away a lot, and they’ve always put up with that. My chil­dren nev­er under­stood what I’m doing. They still don’t under­stand what I’m doing here, but one of my daugh­ters remarked, ​“Great that you go to Hong Kong. You can buy me a fake Gucci bag.”

And my employ­ers, NOB, TNO, gave me all the free­dom to do what­ev­er I need­ed to do. But most of all SURFnet. I used to work there from 2000 to 2012. I came back two years ago as CTO. And this is a com­pa­ny that always has worked to build part of an open, trust­wor­thy, and acces­si­ble Internet. And that is exact­ly what I think I’ve been doing over the last thir­ty years, help­ing to cre­ate that open, trust­wor­thy, and acces­si­ble Internet.

I’ve met many fan­tas­tic, moti­vat­ed, dri­ven, and espe­cial­ly fun peo­ple in the process, a lot of whom are in this room, and it real­ly inspired me to work even hard­er on this. And I real­ly thank you all of for being here and being my col­leagues and work­ing with me.

And last thing I want to say is that mid last year, I got incred­i­bly angry when I real­ized that I’d been build­ing this open, trust­wor­thy, and acces­si­ble Internet—well, that’s what I thought—and that gov­ern­ments have start­ed mis­us­ing this same Internet to spy on their own civil­ians. This is not what we build the Internet for. So please let’s con­tin­ue our work and make sure that gov­ern­ments don’t mis­use it in this way. Thank you.