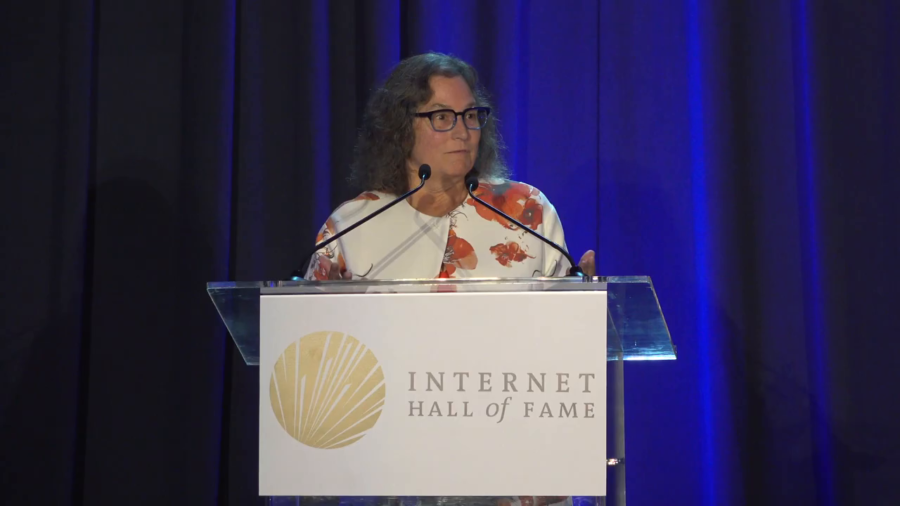 Elise Gerich: Thank you very much for this recog­ni­tion. I was so pleased and sur­prised to receive it, and I’m very very hap­py to see so many friends that I’ve worked with over the thir­ty years of my net­work­ing expe­ri­ence here today. I’m sor­ry for those that could­n’t make it, but for those of you who are here I’m real­ly hap­py to be sur­round­ed by friends.

When I start­ed at Merit in 1987, I real­ly did­n’t know any­thing about net­work­ing at all. And I want to tell a small sto­ry, it’s about one of my long-time friends and col­leagues who’s here. At the first meet­ing that Merit held for the region­al net­work tech­ni­cal peo­ple, I was…very new. I’d prob­a­bly only been on the job about three weeks. And at that time what was fash­ion­able was to wear sweaters that had your ini­tials on them. And we called them mono­grams. My ini­tials on my sweater, for those of you who might be old-timers, were ​“EGP.”

So, that’s my ini­tials so I did­n’t wor­ry about it. But this gen­tle­man who’s in the audience—I can’t see him—came up to me and he said, ​“What’s your metric?”

Well, for those of you who aren’t informed, EGP is the exte­ri­or gate­way pro­to­col that was used in net­works at that point in time. And I did­n’t have a clue.

So, hap­pi­ly I’ve had some col­leagues that were clue­ful. They helped me to learn, and to become part of the team that was bet­ter at build­ing net­works. And I pro­gressed and my career pro­gressed. So thank heav­ens for those col­leagues. Some that I’ll name are Dave Katz and Hans-Werner Braun, and Bilal Chinoy. They were part of the team that helped me to find out what EGP was, and some of the oth­er protocols.

But part of my net­work­ing expe­ri­ence as I grew as a net­work­ing per­son, and Internet per­son, peo­ple would come up and say, ​“Well what was it like to be a woman in a men’s field?” And I’ve got­ta com­pli­ment the Merit folks who hired the NSFNET staff. They were gender-blind. So, I want to make a shoutout to all the women I worked with at Merit. In the Internet Engineering Group there were only sev­en of us, and four of us were women. There was Sue Hares. Some of you may have run across Sue, she’s done a lot in the Internet. Jessica Yu, anoth­er per­son who’s been very very active. Cathy Aronson; I’m sure many of you have run into Cathy also. And me. So we were part of the Internet Engineering team.

Then we had a net­work oper­a­tions staff. They were very tech­ni­cal; man­aged to keep the net­work up at all times. The women that worked there were Sue Blair, Deb Boyer, Gartha Parrish, Sherri Repucci, and Serpil Bayraktar. They’ve all con­tin­ued in their net­work­ing careers, and we nev­er felt like we were out­num­bered. Not at Merit, any­way. But if we went to oth­er meet­ings that’s a dif­fer­ent sto­ry. But hav­ing that core group of peo­ple to grow up with and to learn my net­work­ing real­ly gave me the con­fi­dence I think to do what I was able to do lat­er in my career.

So, I always saw my role as fos­ter­ing col­lab­o­ra­tion and coop­er­a­tion with oth­er net­work oper­a­tors and with oth­er Internet col­leagues. And I think that was the most ful­fill­ing part, is mak­ing those con­nec­tions. And I think Andrew spoke to that ear­li­er tonight when he talked about net­work­ing isn’t just about the bits and bytes and the pack­ets and the wires, it’s about the peo­ple we work with and the con­nec­tions we make, and how we cross bor­ders and cul­tures and become quite inter­con­nect­ed. So that was always a very impor­tant part for me.

And it was fun. And it was fun til I decid­ed to retire. And then I’m prob­a­bly still hav­ing fun but it’s a dif­fer­ent kind of fun. But it real­ly was a good time for the thir­ty years. NSFNET, went to a start­up @Home, went to Juniper Networks, and I fin­ished my career as the IANA at ICANN.

So now I’d like to do some thanks to some oth­er folks. One of ​’em is Cathy Aronson, I’ve already men­tioned her. I did­n’t know about it—it was unbe­knownst to me but Cathy sub­mit­ted my name for nom­i­na­tion. And I’m so pleased and proud and sur­prised. And I thank the ISOC chap­ter and com­mit­tee and advi­so­ry board for select­ing me. I real­ly appre­ci­ate it.

And then most of all I’d like to thank my fam­i­ly. My hus­band John, our two daugh­ters Jocelyn and Samantha, for sup­port­ing me in all the steps of the way. The Internet kind of con­sumed me. I became pret­ty much a worka­holic about it. But they sup­port­ed me every day and in every way so it allowed me to have this won­der­ful career. And in fact I’ll just fin­ish on say­ing in 1987 my h—or, in the late 1980s my hus­band said to me, ​“You seem a lit­tle bored. Maybe you should get a job.” Well, the rest is his­to­ry. I got a job, and here I am. Thank you very much.