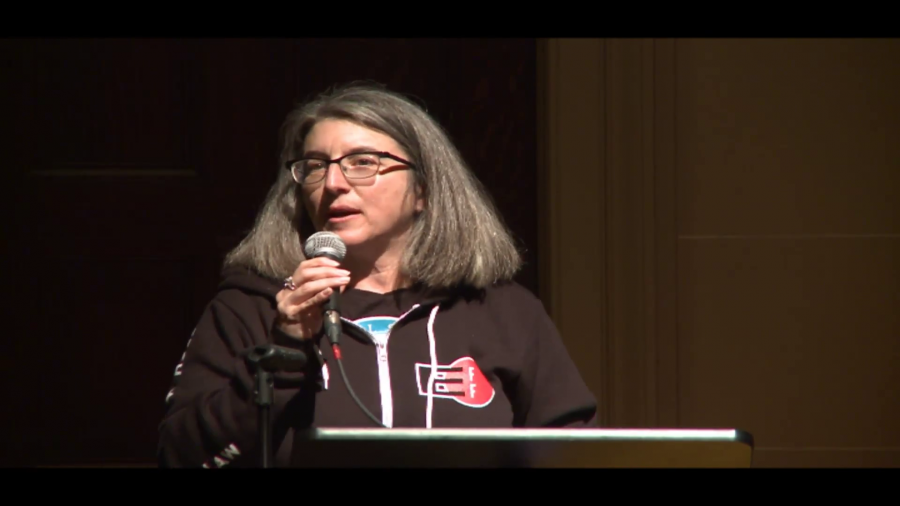 Thanks so much for invit­ing me. When I took over as Executive Director of the EFF in April [2015], many peo­ple asked me, ​“What do you want to do? How do you want to be dif­fer­ent than your pre­de­ces­sor, the amaz­ing Shari Steele” who has her own lit­tle stat­ue. She’s the only non-Archive per­son who has a stat­ue in the Archive, and Brewster did that to hon­or her and the work that we’ve done together.

What I said was, you know I think that there are enough peo­ple who care about the Internet, who under­stand (as my friend Cory Doctorow said) that what­ev­er oth­er issue draws you, if the Internet isn’t free this is the place. The Internet is going to be the means by which we do all the rest of the change that we need to do so bad­ly in this world. And that I think there’s enough peo­ple now that we real­ly have a move­ment, and we need to start think­ing of our­selves as a move­ment, and we have to fig­ure out what our next steps are.

And I have to say, sit­ting here and lis­ten­ing to all the pre­sen­ta­tions tonight, see­ing the amaz­ing activ­i­ty out there, see­ing the ten­ta­cles of what Aaron was a part of in the ear­ly days and in some ways the heart of in the ear­ly days, become a move­ment. You guys, you’re a move­ment and thank you so much for doing this. So let’s fig­ure out what our next fights are togeth­er and our work is togeth­er. But this has just been very excit­ing to see, and to see the growth. We lost our dear friend as a result of some real­ly hor­ri­ble laws and some real­ly hor­ri­ble poli­cies, but see­ing the green shoots that’ve grown as a result of this just does my heart good.

Lisa want­ed me to talk a lit­tle about CISA, the cyber­se­cu­ri­ty act. I think that at this point the best thing that this com­mu­ni­ty can do about CISA is first of all con­tin­ue to talk about how rot­ten it is, because it’s a real­ly rot­ten idea. We have a ter­ri­ble cyber­se­cu­ri­ty prob­lem. This is the a cyber­se­cu­ri­ty act that was recent­ly passed out of the Senate. We have a ter­ri­ble prob­lem with secu­ri­ty on the Internet, as Brewster point­ed out, and Congress just passed a bill that does­n’t make any­thing bet­ter and makes sev­er­al things sig­nif­i­cant­ly worse, in the fine tra­di­tion of our Congress.

I don’t know that there’s too much we can do in terms of pub­lic activism on the bill right now, real­is­ti­cal­ly, because it’s in a con­fer­ence com­mit­tee time, which isn’t the time when there are very many mem­bers of Congress who are going to pay atten­tion to it. There’s one thing, though, that we have to keep watch­ing on and that you’ll hear EFF and oth­ers ral­ly the troops on, and that is the effort to try to put some hor­ri­ble changes to the Computer Fraud and Abuse Act into this bill. We expect it’s going to come up again, and when it does you’ll hear the ral­ly­ing cry. And I think if peo­ple who want to Aaron Swartz do one thing with regard to Congress and then go back to cod­ing, the one thing you should do is say ​“That law goes no fur­ther. It does­n’t get any worse and it does­n’t take any lives.”

We have a cou­ple oth­er pol­i­cy oppor­tu­ni­ties that I thought I’d men­tion to you guys. We just got a real­ly amaz­ing rul­ing out of the European Court of Justice in the last cou­ple weeks that real­ly points out what a glob­al prob­lem the NSA’s over­reach and the sur­veil­lance over­reach is. It’s got some com­pli­cat­ed stuff hav­ing to do with the safe har­bors and how American com­pa­nies get to process infor­ma­tion relat­ed to peo­ple all around the world. But the impor­tant part for us is to keep a close eye on what hap­pens next, because the old rules have been crossed out and the American com­pa­nies and the European reg­u­la­tors and the American gov­ern­ment are in an intense nego­ti­a­tion about what hap­pens next.

So we’ve got an inflec­tion point oppor­tu­ni­ty here and we ought to be talk­ing about this European Court of Justice opin­ion and what it means, because what the European Court of Justice said is the NSA sur­veil­lance is not appro­pri­ate. For the legal geeks, this is sur­veil­lance under Section 702 of the FISA Act and Executive Order 12333. What that means is the American gov­ern­men­t’s view that it can spy on the rest of the world with impuni­ty, that it can do mass spy­ing of peo­ple around the world who are not sus­pect­ed of any crimes, who aren’t tar­gets, who aren’t for­eign spies, is unac­cept­able under European law. It’s a real­ly excel­lent insti­tu­tion[?]. You guys should all thank Max Schrems, who brought that case.

There’s a moment now, for the next few months, and I think to the extent that you guys are blog­ging, writ­ing, tweet­ing, you should be pay­ing atten­tion to this because we’ve the American com­pa­nies are real­ly scared. They want to be able to serve Europe, and we need to give them a back­bone to say ​“enough with the sur­veil­lance, it’s hurt­ing our busi­ness.” And if we could have that argu­ment plus it’s actu­al­ly just plain wrong, we might be able to get some­where. So please, if you’re watch­ing the pol­i­cy debates, that’s some­thing to watch.

There is some good news in the state of California. We just passed, and we got Governor Brown to sign, a law called CalECPA, which requires the California state cops, to get a war­rant before they go after your infor­ma­tion stored with ser­vice providers. This is com­plete­ly con­sis­tent with the val­ues— it’s California tak­ing the lead in a place where frankly the US Congress is unwill­ing to go, and we’re hop­ing to spread this across the coun­try. So for peo­ple who are not Californians this is a law to look at if you want to do some­thing local­ly and try to match or even do one bet­ter than California did with that. So we’ve got some good news as well.

And of course one of the oth­er things that we’re going to have to keep an eye on in the pol­i­cy things is the cryp­to­wars are back. I had the hon­or of being deeply involved in get­ting cryp­to free from gov­ern­ment reg­u­la­tion when we did it the first time in the 90s and frankly I’d like to do some­thing else now. So it’s time for the leg­is­la­ture and the FBI to get over it. Crypto is here to stay, and all of the tools that we’ve talked about here tonight depend on the abil­i­ty for peo­ple to have strong unbreak­able cryp­to, and we need to stand up for it again. Watch the EFF web site. We’re going to keep talk­ing about this, and you’ll see some causes.

We just got 100,000 peo­ple to sign our save​cryp​to​.org peti­tion, which is going to go to the President now, and the President has to respond to it. It’s not too late, though. If peo­ple still want to sign it, I think it’s still avail­able to sign. I think we need to send a strong mes­sage to the White House that President Obama needs to come out and take a strong stand on cryp­to, not just say ​“we’re not going to come after cryp­to right now but we may do some­thing lat­er” but to say, ​“Hell no. Americans deserve to have locks on their doors that don’t have back­door entries for law enforcement.”

And while the folks in Washington DC like to just wave their hands and say, ​“You geeks sort it out. Find a way to have a back­door that only good guys can go in and bad guys can’t,” those of us who know about tech­nol­o­gy, and more impor­tant­ly those of us who know about math, know that this is impos­si­ble. So we need to make sure that that mes­sage starts here from the West Coast and makes it all the way to the East Coast. I hear they know about math out there, too, so it should­n’t be that hard to explain it. But I think we’re going to have to con­tin­ue to do some explaining.

So that’s just a quick update of what we’re doing at EFF. I’m so hap­py to see so many projects being cel­e­brat­ed here that were cre­at­ed or inspired or legal­ly defend­ed by EFF. We’re going to con­tin­ue to be the sup­port for this com­mu­ni­ty. One of the things that John Perry Barlow taught me years ago is that your rights aren’t giv­en to you, your rights have to be tak­en. And we’re here today to con­tin­ue to take our rights.