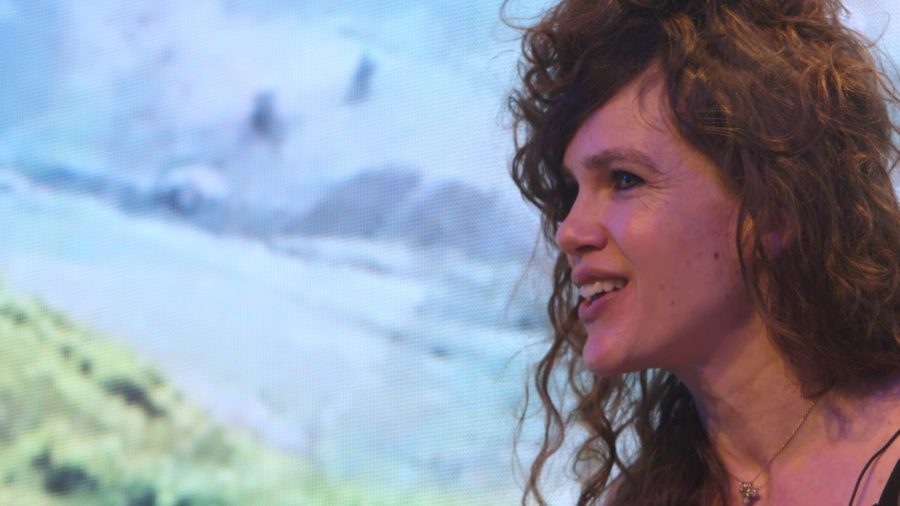 The ques­tion that philoso­phers have asked since antiq­ui­ty is how should you live? What is the good life for a human being? And the two answers that have repeat­ed­ly come back time and time again are that there are two things that mat­ter. One is agency. That’s to say being in con­trol of your life, active­ly, cre­ative­ly engag­ing with the world. And the oth­er is com­mu­ni­ty. That the thing that mat­ters for human beings is rela­tion­ships. And what I’m going to do is take you on a kind of whis­tle stop tour of Western phi­los­o­phy, and look at how these two core ingre­di­ents of the good life have fared in the waves of indus­tri­al devel­op­ment that we’ve been hear­ing about this morn­ing. Or to put it anoth­er way, will the Fourth Industrial Revolution real­ly bring us the good life?

So, to begin with the ques­tion of agency, I going to look at three dif­fer­ent ways in which dif­fer­ent philoso­phers have char­ac­ter­ized this con­cept. And I’m going to begin at the begin­ning with Plato. So, Plato said that in order to flour­ish you had to be in con­trol. That’s to say you had to be mas­ter of your desires. To be ruled by your desires was to be a slave to them. It was as if you were to be ruled by a hydra. That’s to say when you kill off one snake, or desire (for boots in my case), anoth­er two imme­di­ate­ly spring up in their place. You might think about jets. I don’t know. I like the shoes.

Another way of think­ing about agency was pro­vid­ed by John Locke, who said that in order to suc­ceed, in life in order to suc­cess­ful­ly engage with the world, you have to under­stand that world. So, for exam­ple, if you’re dri­ving a car it’s a very good thing to be able to know how to fix the engine, which my grand­fa­ther for exam­ple used to do. I cer­tain­ly can’t, Or, of course there are some coun­tries in the world which don’t allow peo­ple to dri­ve, don’t allow women to dri­ve. That’s anoth­er exam­ple where it’d a very good idea, where under­stand­ing lib­er­ates us and gives us agency in the world.

And final­ly, the third philoso­pher whose idea of agency I want to look at is your friend Karl Marx, who said of course that in order to lead a ful­fill­ing life what you need is you need to act in the world. You need to cre­ate. You need to pro­duce. You need to labor. But you have to have a sense of own­er­ship over that labor. You have to iden­ti­fy with the work that you do. And we can I’m sure all relate to this when we think about writ­ing, or paint­ing, or climb­ing a moun­tain, or ski­ing down it. There’s very lit­tle in life that’s good that does­n’t come at some kind of cost of activ­i­ty or cre­ation. Activity, agency, is what counts.

And arguably, these things are threat­ened by the indus­tri­al rev­o­lu­tions that we’ve been hear­ing about, and in par­tic­u­lar in the con­text of the Fourth Industrial Revolution. Of course Marx him­self gave the most pierc­ing analy­sis of what hap­pens when one is alien­at­ed from one’s labor. The more you become part of a pro­duc­tion line, the more repet­i­tive, the more dis­creet, the more mind­less your tasks, the less a human you are. The more of a kind of shell of a human, of a shad­ow of a human. The more you become like an instru­ment, or an object, until human­i­ty is erased altogether.

That’s the pro­duc­tion side. On the con­sumer side, it looks like the Fourth Industrial Revolution should give us a utopia. A world where all our needs are met. A world where we’re com­plete­ly plugged in to every­thing that we might pos­si­bly desire. But of course the dan­ger here is the pas­siv­i­ty, the oppo­site of the activ­i­ty that our philoso­phers told us was cru­cial to the good life. But every­thing is giv­en to us. We don’t have to do any­thing anymore.

A fur­ther thought is that we lose under­stand­ing, we’re deskilled. Not only [can we not] fix our car, we can’t remem­ber our phone num­bers. Which of course is very com­pli­cat­ed when your bat­tery runs out on your phone and you’re on the top of a moun­tain. And also, there’s a dan­ger with smart mar­ket­ing and accel­er­a­tion of con­sumerism that comes with that. That there are things we did­n’t even know that we want­ed until they’re beamed into our phone. And then sud­den­ly we become vic­tim again to Plato’s hydra, unable to bat­tle off these desires that are con­tin­u­al­ly put in front of us.

So that’s agency, which we out to keep an eye on. The sec­ond thing that philoso­phers have said is cru­cial to the flour­ish­ing life of a human being is com­mu­ni­ty. Again, going right back to the begin­ning, here’s Aristotle. Aristotle said, as I’m sure you all know, that man is by nature a polit­i­cal ani­mal, a zoon poli­tikon. That’s to say a man who flour­ish­es when he is in a com­mu­ni­ty. And Aristotle said that com­mu­ni­ty is only pos­si­ble when you have ethics. That’s to say when you can deal just­ly with oth­er human beings, when you rec­og­nize their humanity.

Simone de Beauvoir…I’m mov­ing for­ward to the 20th cen­tu­ry. She brought togeth­er the ideas of agency and of ethics when she said in her exis­ten­tial­ist way that you are noth­ing as a human being unless you act. And more­over it’s not good enough just to act in any pas­sion­ate way that you want. What you have to do is you have a respon­si­bil­i­ty as a human being to act eth­i­cal­ly, to care for your fel­low human beings. And of course in her mind was appease­ment in the 1930s, and the impe­tus as she saw it on France and Britain to act.

Now, how do we get com­mu­ni­ty? How do we get ethics? Well, anoth­er way putting that is, how do you learn to care about your fel­low human beings? The Scottish enlight­en­ment philoso­pher David Hume, he said that the only way that you learn to care is by hav­ing empa­thy. And you don’t get empa­thy just by under­stand­ing facts and fig­ures. Only if you look in the face of human suf­fer­ing, and of human joy, and of human dig­ni­ty, do you start to kick­start those eth­i­cal impuls­es upon which com­mu­ni­ty depends.

And of course there’s a dan­ger in the con­text of the Fourth Industrial Revolution that rather than increas­ing empa­thy, it’s going to pull us fur­ther apart. There are var­i­ous motors of atom­iza­tion that we have to be aware of. The first one, doubt­less obvi­ous to us all, is that in our increas­ing­ly vir­tu­al com­mu­ni­ca­tion, we have less and less phys­i­cal con­tact with each oth­er, less and less actu­al con­tact with each other.

We live in increas­ing­ly siloed worlds. We have our per­son­al­ized news feeds. The echo cham­ber of Twitter, where we’ve become less and less aware of what oth­er peo­ple think, what oth­er peo­ple’s val­ues are. We have the mas­sive prob­lem of grow­ing inequal­i­ty which comes about in part as a result of the high-tech, high-touch, new econ­o­my that seems to be only accel­er­at­ing in the con­text of the Fourth Industrial Revolution.

Now, you might think this sounds a bit apoc­a­lyp­tic and depress­ing, and so I want to end with an exam­ple, a con­crete exam­ple, of where I live. This is two streets from where I live in Hackney, in London. This shows the riots that broke out in London in 2011 when a young black man, Mark Duggan, was shot dead by the police. And it sparked off loot­ing and burn­ing. And it seemed at the time—I myself remem­ber try­ing to cycle my daugh­ter through these riots and think­ing, ​“Oh God! This is…this speaks to a sort of ter­ri­ble dis­lo­ca­tion. A ter­ri­ble inequality.”