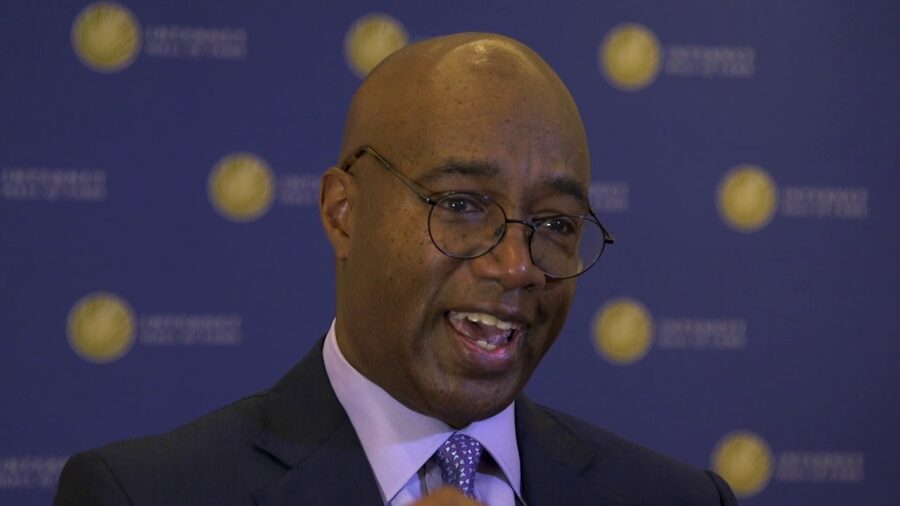 Intertitle: Briefly describe your most vital con­tri­bu­tions; what led you to become an Internet Hall of Fame member?

Larry Irving: I think pri­mar­i­ly it’s my work on the dig­i­tal divide. 1993, it’s a new pres­i­den­tial administration—the Clinton-Gore admin­is­tra­tion. We were focused on putting peo­ple first, and one of the things that we were going to put peo­ple first was bring­ing the Internet to the peo­ple of America. We had this thing called the National Information Infrastructure, which lat­er became the Web, which lat­er becomes the Internet, and my job real­ly was to help fig­ure out the ground rules for it. But also to help con­nect schools, and libraries, and hos­pi­tals, places where peo­ple would use the Internet.

I went with Secretary Ron Brown, who was my boss, out to Palo Alto, California—I’d gone to school at Stanford. I knew Palo Alto pret­ty well. And went to Cupertino, which is where Apple was head­quar­tered. We went to vis­it this nice lit­tle school. This is ​’94, ​’95 and we were already doing some work with the Internet. But there were kids there in Cupertino, like eight to a desk that had these won­der­ful new iMacs. Later that day I hap­pened to go up to Hunters Point, to a high school called Thurgood Marshall High School, pre­dom­i­nant­ly black and Latino. Most of those kids had no idea that a thing called the Internet exist­ed, had nev­er seen a com­put­er. And at that moment I kind of real­ized that the future of the coun­try depend­ed on those kids—bright kids, American kids, kids who want­ed to learn, both hav­ing equiv­a­lent access.

Intertitle: What are the biggest chal­lenges you had to over­come to achieve suc­cess; how did you over­come them? Was there an ​“aha” moment, a peri­od of impact or a break­through real­iza­tion or a steady flow?

Irving: There’s more black, Latino, Native American art at the Smithsonian American Art Museum than any muse­um in the coun­try. But 95%, 99% of Americans are nev­er gonna get to Washington to see it. Online they can all expe­ri­ence it. That’s what this thing’s about, and those are my aha moments. Every time I talk to to somebody…their aha moment became my aha moment. Because they’d see it through their lens, and that made me a bet­ter artic­u­la­tor of this vision. Because now I’ve got fif­teen or twen­ty or thir­ty visions.

You go to a pueblo in New Mexico and you’re talk­ing to a Native American elder, and he’s talk­ing about how their lan­guage is dying and maybe they could use the Internet to pre­serve their lan­guage by con­nect­ing the dif­fer­ent pueb­los around New Mexico and fig­ur­ing out what the art, what the his­to­ry, what the lan­guages are that’re begin­ning to die; keep that cul­ture alive. Again, I nev­er would’ve thought about it…put the tech­nol­o­gy in the hands of peo­ple, they’ll come up with great ideas every time.

Intertitle: Which peo­ple, expe­ri­ences or devel­op­ments were most cru­cial in your pro­fes­sion­al suc­cess and its impact?

Irving: So I’ve worked with men and women my entire life whose com­mit­ment was not just pub­lic ser­vice but pub­lic ser­vice for folks who real­ly need­ed pub­lic ser­vice. You know, we weren’t just tak­ing PAC checks from peo­ple who’d come to Washington and kind of dic­tate what was gonna hap­pen. We’d go out in the com­mu­ni­ty and say, ​“What do you need, how can we help you in Washington?” That’s the same thing I try to do with the Internet, go out to the peo­ple in the com­mu­ni­ty and say how can we help you?

Larry Irving: You know, I have a lot of fears about the Internet. I fear the loss of pri­va­cy. It is still seen by far too many peo­ple as the domain of oth­er than minori­ties, of oth­er than women, of oth­er than poor peo­ple, and it’s got to be about all of us. I fear that it is becom­ing a pay-to-play eth­ic, and the thing you’re going to be hav­ing to pay with is your pri­va­cy. I dis­like that a lot of com­pa­nies say, ​“Hey, we’ll give you free Internet, and all you have to do is let us know every­thing about you that we’re going to sell to some third par­ty.” That’s the main fear.

Intertitle: What advice do you have for the next gen­er­a­tion work­ing in your field?

Irving: I don’t think most kids in tech­nol­o­gy in America think that peo­ple in tech­nol­o­gy look like them. You know, every African American boy can tell you who Lebron James is, they can tell you who Antonio Brown is. And I wish I was as tal­ent­ed as Lebron James is, wish I could throw a foot­ball like Patrick Mahomes, but most of us can’t. Most of us how­ev­er can con­tribute some­thing in our com­mu­ni­ty to bring the Internet to a school or a library. Most of us can help devel­op pub­lic pol­i­cy. Most of us can fig­ure out ways that we can use the tools that the Internet pro­vides to make life better.

And here’s one of the oth­er things that I’m real­ly hap­py about. I’m one of the first kind of pub­lic pol­i­cy people—lawyer slash…you know, non-engineers, the one who did­n’t build the wid­gets but kind of built the poli­cies. A large part of the growth of this Internet, what hap­pens for the next ten, fif­teen years with regard to Internet, is going to be at least as much a result of what hap­pened with policymakers.

Intertitle: What has sur­prised you most about the Internet as it has developed?

Irving: I think the thing that’s real­ly amazed me is how many peo­ple use it— How des­per­ate we are as a peo­ple. It’s some­thing about our just being human beings want­i­ng to tell our own sto­ries. The social media thing, every­body missed it…but I should­n’t have because in 1994, ​’95, we gave a grant to a hous­ing project in Newark, New Jersey under the TIIAP pro­gram. A lit­tle girl wrote me a let­ter, said ​“Dear Mr. Irving, Thank you so much for giv­ing me access to the Internet. I love my Internet. I love being able to go on the Internet and read­ing all these sto­ries about the rest of the world. But you know what, Mr. Irving, you know what I real­ly love? I love open­ing that win­dow and shout­ing out my story.”

All of these things are very very real. You know, when I look back at the work Laura Breeden and Bernie McGuire-Rivera and they were doing these ini­tial TIIAP grants…you know, we had a very very sim­ple job in a lot of ways. We were just con­nect­ing peo­ple to the Internet. And that was great. And I can always say for the rest of my life that at the begin­ning of the Internet I was there and played a small role.

This gen­er­a­tion’s going to play a larg­er role. Because now you’ve got to fix some­thing in real-time. It’s kin­da like fix­ing an air­plane going 600 miles an hour, while you’re fly­ing. There are things with the Internet the des­per­ate­ly need to be fixed, and I’m not sure that we have the time or the capac­i­ty, or the will­ing­ness, to take, to tack­le the tough job we’re gonna have.

Intertitle: How do you hope to see the Internet evolve?

Intertitle: What does it mean to you to be one of the first African-American Hall of Fame inductees?

Irving: —but I think the impor­tant thing is I want every black and Latino boy and girl, I want every Native American, I want every Asian American, I want every trans— I want every per­son out there who kin­da feels like they’re an oth­er in a soci­ety that makes them feel like that to say you know what, this kid’s from a pub­lic hous­ing project when he was born, pub­lic school edu­cat­ed, did­n’t for­get his roots, and did some­thing impor­tant and pow­er­ful for this nation, and for the world. I mean that’s…that’s what it means to me.

But what’s impor­tant to note, noth­ing that I did did I do by myself. It was an amaz­ing career. I had the 1927 Yankees, which they’re the ones peo­ple say they’re the best all-time base­ball team? The peo­ple around me…Bernie McGuire, Laura Breeden, Tasha Williams. The native American focus I had was a young woman named Roanne Robinson. Becky Burr, Jane Coffins at the Internet Society. There are so many incred­i­ble, smart peo­ple who gave their lives, you know, sleep­less nights, try­ing to get some of these projects up. Working with Capitol Hill. I want peo­ple to have that work eth­ic too. I want them to under­stand that all of us are part of a team. We were a diverse team of smart peo­ple. I hap­pened to be the biggest mouth and had the cor­ner office, but none of this would’ve been done with­out a whole bunch of folks. And the fact that the per­son who led the effort hap­pened to be an African American male, I think is impor­tant because too many times, peo­ple think the Internet’s…that black folks did­n’t have any involve­ment in it, Latinos did­n’t have any involve­ment in it, the Native Americans did­n’t have any involve­ment in it. And I can show them exam­ples in each those com­mu­ni­ties that not only had a part but were inte­gral to its success.

Intertitle: You men­tioned the ​“dig­i­tal divide” caus­es some minori­ties to feel even more on their own. As one of the first African-American Hall of Fame inductees, what would you say to a room full of peo­ple that may feel this way?

Irving: I’d say to them, don’t for­get where you came from, but focus on where you want to get to. I mean, I— There’s nev­er a moment that I’m not proud to be from Brooklyn, that I’m not proud to be black, that I’m not proud to be a working-class kid. But there’s nev­er the moment when I did­n’t know that I could be more than what I was, and that I could­n’t bring oth­er peo­ple along with me to what­ev­er their dreams were. I had no aspi­ra­tions at 17 years old that I’d work for the President of the United States before I was 40. That I’d meet with the Vice President of the United States every day. You know, that was not with­in the realm of pos­si­bil­i­ty for some­body in my com­mu­ni­ty. It is in the realm of pos­si­bil­i­ty for every one of those kids and I want them to know that, believe that, and if that’s what they want to do, real­ize that dream.