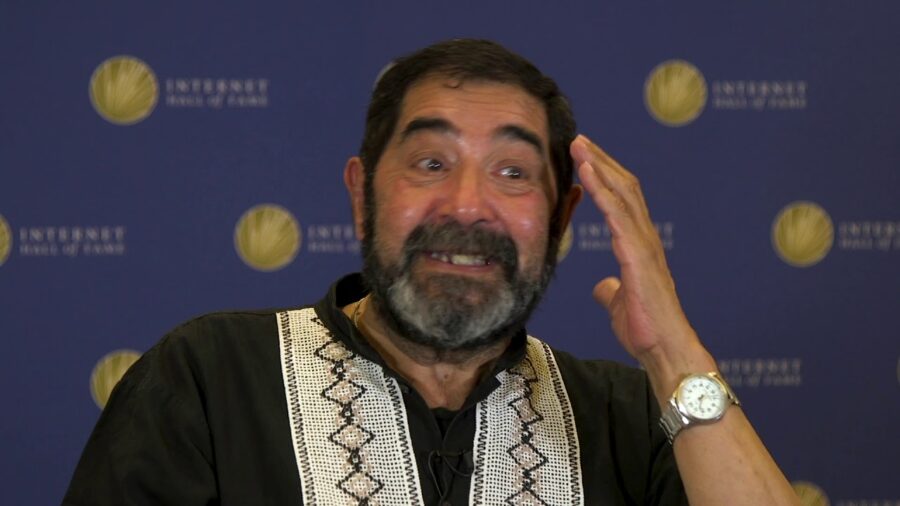 Intertitle: Briefly describe your most vital con­tri­bu­tions; what led you to become an Internet Hall of Fame member?

But we real­ized one mil­lion speak Quechua Then we intro­duced the Indian lan­guage into the Internet, very ear­ly. I’m talk­ing of ​’94, some­thing like that. And we began to give cours­es in Quechua, but we began to put con­tent of inter­est for the Indians of our coun­try, which were 8 mil­lion peo­ple then, on the Internet. That was the contribution.

Intertitle: What are the biggest chal­lenges you had to over­come to achieve suc­cess; how did you over­come them? Was there an ​“aha” moment, a peri­od of impact or a break­through real­iza­tion or a steady flow?

Soriano: We dreamed a lot, then we real­ized our dreams. Peruvians, we said in that time, we are not very good in many things but we are sur­vivors. Then we real­ized how to use this tech­nol­o­gy to sell things from the ori­gin. That means so from Cusco to New York. Some Indian sell­ing pota­toes. Or an arti­san who sold bijoux á Paris. That then allowed us to make anoth­er kind of net­work, than what you you were doing at that time.

Then the chal­lenge makes a very inter­est­ing time for us, because it was very busy, very emo­tion­al, also. We had a lot of inter­est in the peo­ple. And the prob­lems we had were the usu­al prob­lems. We had all the net­works in Latin America. It was the com­mer­cial telecom­mu­ni­ca­tion net­works. They did­n’t want to give us a con­nec­tion. They did­n’t want to allow us to make our own con­nec­tions with United States at that time using satel­lites. But it was in the rules of the game, if you will. And we arrived to solve that problem.

Intertitle: Which peo­ple, expe­ri­ences or devel­op­ments were most cru­cial in your pro­fes­sion­al suc­cess and its impact?

José Soriano: My fears today are the com­pa­nies, the twenty-six per­sons who have 48% of the cap­i­tal of the world. And as the Internet reflects the world, we have the same in the Internet. We have many…very very tiny…three, four, five com­pa­nies, who have the prop­er­ty of all the Internet. And that is the issue in this moment. And that’s some­thing the peo­ple don’t see in this moment. The young peo­ple don’t care about inti­ma­cy. But it’s a very very dif­fi­cult prob­lem because now every­thing is open, and every­body is look­ing around. Then, we must be con­scious of these kind of prob­lems. Which is not new. It’s the same prob­lem we had when we began. But as we did­n’t care for that prob­lem, these prob­lems became very big now. Then we must make some­thing. I don’t know what, because I have no solu­tions. But we need to make reflec­tions about all the guys who make this Internet. We need to reflect on that and fight a lit­tle bit for that kind of goal.

Intertitle: What advice do you have for the next gen­er­a­tion work­ing in your field?

Soriano: I only hope the youth always have new ideas, inno­va­tions. But now it’s a lit­tle sleepy because they are learn­ing the new tech­nolo­gies. But we have tech­nolo­gies that are very very dan­ger­ous. 5G is going to give con­trol of the Internet to all the telecom­mu­ni­ca­tion com­pa­nies. And that is a prob­lem for the young peo­ple. They must solve it, I don’t know how, but I’m con­fi­dent they’re going to solve it.

Intertitle: What has sur­prised you most about the Internet as it has developed?

Soriano: Say in that time, if some­body dis­cov­ers some­thing, you must find how you can use it in a way we don’t know we can use it. And that’s all the time. The Internet evolves all the time. Then they are evolv­ing now, again. We don’t know where they go. But we must pay a lot of atten­tion to what is hap­pen­ing in the Internet. Because it’s become, now, almost all our life. We have Internet every­where. The Internet of things. Bitcoin, the econ­o­my. How we con­trol mass­es using the Internet, like analytics…that com­pa­ny in England who make the Brexit, or in Argentina with the pres­i­den­tial cam­paign. Then we must be very very, very clever to try to see far; strate­gi­cal­ly. It’s a thing of an old guy. Who can say?