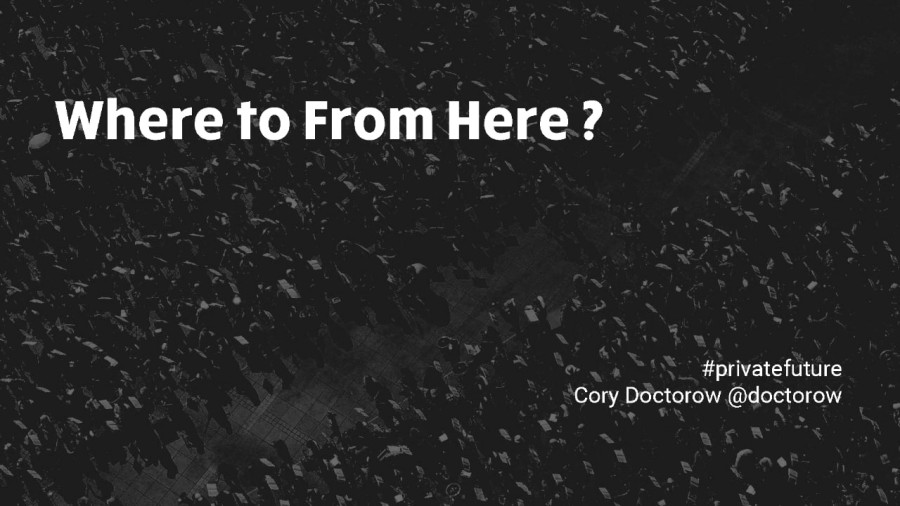 Where to From Here?

Thank you all. Thanks for hav­ing me. I don’t know if you know this, but the arts destroyed the Internet in 1998. In 1998, Congress passed a law called the Digital Millennium Copyright Act, that was sup­posed to defend artists’ rights. And the idea was that we would make it a felony pun­ish­able by up to five years in prison and a $500,000 fine for a first offense to break a dig­i­tal lock that pro­tect­ed a copy­right­ed work.

That was sup­posed to make sure that when you bought a DVD you would have to buy the movie again on your phone and not just rip it and put it on your phone. Somehow that was going to pro­tect artists. This com­plete­ly failed. You may have noticed copy­ing has­n’t slowed down since 1998. It’s nev­er going to slow down. Your grand­chil­dren will mar­vel at how hard copy­ing was in 2015 and say, ​“Tell me again grand­ma and grand­pa, about 2015 when you could­n’t buy six hard dri­ves for a dol­lar at the Walgreens that could hold all the works of art ever created.”

But, what it did do is it cre­at­ed this pow­er­ful incen­tive over the last sev­en­teen years, dur­ing which we’ve been infil­trat­ing every­thing in our world with com­put­ers, to design com­put­ers so that there was some­thing copy­right­ed in the mid­dle of them and a dig­i­tal lock on the out­side that made it a felony to recon­fig­ure that com­put­er. And it has turned our world made of com­put­ers into a world made of com­put­ers that act like inkjet print­ers, where it’s a crime to do any­thing with it that under­mines the prof­it and busi­ness mod­el of the peo­ple who made it.

When I say we live in a world made of com­put­ers, I don’t mean this sort of Tron sense where every­one dress­es in jump­suits and you can walk into your house and say, ​“Tea, black, hot,” or wave your hand to make the lights go on. I mean lit­er­al­ly the most salient fact about many of the arti­facts in the 21st cen­tu­ry is not what they’re made out of or how they were licensed, but what the infor­mat­ics inside of them are. You take a wil­lowy star­chi­tect tow­er in the finan­cial dis­trict of any of the great cities of the world, and you ask your­self how does it stay upright when it’s so tall and wil­lowy? And the answer is it’s got dynam­ic load adjust­ment through computer-controlled seis­mic rein­force­ments. If you change the soft­ware on them to bad soft­ware, the build­ing falls down. Bankers work in case mods.

So the most salient fact about our world is that it has com­put­ers in it. And to under­stand that, think about John Deere trac­tors. This year, John Deere went to the US Copyright Office and said ten­ant farm­ing is still alive and well because you can’t own your trac­tor, you only license your trac­tor because we own the firmware in your trac­tor. It’s only licensed to you, and we want it to be a felony to unlock your trac­tor. They want it to be a felony to unlock your trac­tor because while your trac­tor’s rolling around your fields, the torque sen­sors in the wheels are doing centimeter-accurate soil sur­veys and then that infor­ma­tion is not avail­able to the farmer, it’s avail­able to Monsanto who are the exclu­sive licen­sor of it. And if you want to use auto­mat­ed seed broad­cast­ing, you have to buy your seed from Monsanto, the sole own­ers of that data. But the real rea­son that they’re inter­est­ed in it (the Monsanto thing’s just sort of the mustache-twirling warm-up for the full-on Doctor Evil) is because doing centimeter-accurate soil sur­veys of entire agri­cul­tur­al regions gives you enor­mous insight into the future crop yields, which is a multi-billion dol­lar source of poten­tial intel­li­gence to Monsanto down the road.

So Monsanto asked the copy­right office to affirm to the farm­ers of America that they could­n’t own their trac­tors, and GM chimed in to say, ​“That’s true of your car, too. We own the infor­mat­ics in your car. The copy­right should for­bid mechan­ics who haven’t signed a license from us from find­ing out what’s going on in your engine. That way, as a con­di­tion of the license we can make them buy orig­i­nal GM parts.” It turns out that when GM said ​“That’s not your father’s Oldsmobile,” it was­n’t an adver­tis­ing slo­gan, it was their lit­er­al belief about that car in your driveway.

You may have seen an arti­cle in the New York Times about six months ago about sub­prime car lend­ing. Now that sub­prime hous­ing is gone, we need a new thing to secu­ri­tize, and it’s poor peo­ple who need cars. So they make these loans to peo­ple who aren’t good cred­it risks for cars to secu­ri­tize those bonds and keep their val­ues as high as pos­si­ble. They fit the igni­tions with location-aware net­work igni­tion over­rides that enforce the terms of the license. If you’re a day late on your loan pay­ment, your car igni­tion sys­tem, which has a sep­a­rate audio sys­tem, starts to bark at you, ​“You’re a day late on your pay­ment.” Somehow Orwell has turned into not just a man­u­al for state­craft but also for finan­cial ser­vices design.

And what these cars do is they enforce terms like if you cross the coun­ty line, your car won’t start again. The Times pro­filed this woman who took her kids out to the woods for a walk, and they came back and were out of cel­lu­lar range, and they crossed the coun­ty line. She had­n’t real­ized it and it was dark and maybe there were wolves. And her car would­n’t start and they had to walk to the road to hitch­hike. So the most salient fact about your car is its informatics.

I saw this amaz­ing demon­stra­tion a cou­ple of years ago from this guy called Hugh Herr, who runs the MIT pros­thet­ics lab at the Media Lab. Herr’s got great visu­als. I don’t do visu­als. I’m a word guy. He shows you pic­ture after pic­ture of peo­ple whose lives have been pro­found­ly trans­formed by inte­grat­ing their bod­ies with com­put­ers. He’s got arms and hands and feet. I think he’s got brains that have been used mag­net­ic induc­tion to con­trol oth­er­wise untreat­able forms of depres­sion and so on. And then his last slide is this amaz­ing show­stopp­per. He shows you a slide of him climb­ing a moun­tain, cling­ing to it like a gecko, super ripped, all in Gore-Tex, and from the knees down he’s wear­ing these pros­thet­ics, because his legs end at the knees. He’s wear­ing these moun­tain climb­ing pros­thet­ics. And he says, ​“Oh did­n’t I men­tion?” and he rolls his pants legs up, and he’s robot from the knee down. And he said, ​“I’m a moun­taineer. I lost my legs to frost­bite,” and he starts run­ning up and down the stage with his robot­ic legs, jump­ing like a moun­tain goat.

It’s a great demo, and the first ques­tion any­one asks is, ​“How much did your legs cost?” He names a price, you could buy a brown­stone on the Lower East Side. The sec­ond ques­tion any­one asks is, ​“Who can afford those legs?” And he says, ​“Why, any­one. If it’s a choice between a forty-year mort­gage on a house and a forty-year mort­gage on the legs, you’ll take your legs.” Now think about sub­prime lend­ing and what it means when your legs are designed to take orders from remote par­ties. And when it’s a felony to change the way that your legs are configured.

We heard a lot about Nest tonight. It’s a good icon­ic Internet of Things-is kind of thing. But I want you to think about what it means to have the HVAC sys­tem in your house, which has the pow­er of life and death over you, to be designed to take orders from remote par­ties and now allow you to change how it’s con­fig­ured. You may remem­ber dur­ing the Euromaidan upris­ing in Kiev, peo­ple who went to the demon­stra­tions, their phones (because their phones are designed to trans­mit infor­ma­tion even if it’s against their will so that the accu­rate billing records can be kept) had their iden­ti­ties cap­tured through a thing called a Stingray device while they were at the protests. They got back home, their phones buzzed, there was an SMS that said, ​“Dear cit­i­zen, you’ve been record­ed as an attendee at an ille­gal demon­stra­tion. Think before you do it again.”

What if the next time that hap­pens they come home and they see, ​“Dear cit­i­zen, you’ve been record­ed as an attendee at an ille­gal demon­stra­tion, and that’s why we turned your heat off in February in Kiev.”

But peo­ple always ask me to make a pre­dic­tion in the form of opti­mism or pes­simism about the future. Are you opti­mistic or pes­simistic about the future of tech­nol­o­gy. And that is by way of pre­dic­tion, right? The thing is that this is a pre­dic­tion that is of no con­se­quence at all. Because whether you’re opti­mistic and you think that we are being the ances­tors our descen­dants deserve and that our chil­dren will look back and say, ​“How is it that you piv­ot­ed the world at this crit­i­cal junc­ture and made com­put­ers into a force for human lib­er­a­tion?” Or whether you fear that Orwell will look like a Teletubby by com­par­i­son in twen­ty years, you should do the same thing every morn­ing, which is get out of bed and do every­thing you can to make com­put­ers into a source for free­dom and human lib­er­a­tion. It does­n’t real­ly mat­ter whether you think it’s bad or good, because the one thing that we know is that if we aban­don the field and just allow peo­ple who would like to use com­put­ers as a sys­tem of con­trol to use it, that they will just march on using com­put­ers as sys­tems of con­trol, with no resis­tance at all.

So rather than opti­mism or pes­simism, I’d like you to have hope. And hope is why when your ship sinks in the mid­dle of the ocean you tread water. Not because you have any real­is­tic expec­ta­tion of being picked up but because every­one who was ever picked up after their ship sank tread­ed water first as a nec­es­sary but insuf­fi­cient pre­con­di­tion. The oth­er thing about hope is that it gives you strength. So if your ship sinks and some­one you love is with you and they can’t kick for them­selves, you put your arms around their neck and you kick until they’re able to get more ener­gy. And we are peo­ple who maybe appre­ci­ate some of these ricks ahead of time, who under­stand that there are oth­er dimen­sions apart from the imme­di­ate instru­men­tal­i­ty of tech­nol­o­gy that we should be think­ing about, and we are sur­round­ed by peo­ple who will some­day appre­ci­ate that. Because although we haven’t reached peak sur­veil­lance, we’ve reached peak indif­fer­ence to sur­veil­lance. There will nev­er be anoth­er day in which few­er peo­ple give a shit about this because there’ll nev­er be a day in which few­er peo­ple’s lives have been ruined by this. And so we just need to keep kick­ing while it happens.