I made a bot called @corruptum, and he uses a lot of copy­right­ed con­tent in his cor­pus, so I was won­der­ing whether it was legal and whether its use qual­i­fied as Fair Use.

Moving on to Fair Use, most of the copy­right­ed con­tent that it con­tains isn’t iden­ti­fi­able in the con­text of the tweets, except for 10 PRINT, which it uses a lot of the bib­li­og­ra­phy of, for some rea­son. I don’t real­ly remem­ber why I put that there. Just for a while when I was work­ing on this bot, when I found some­thing on the Internet I would just paste it in and that was how it went.

This is from a Roman guide book. It says ​“from silk, China received nuts, sesame seeds and grapes from Persia, spices Mantua, ran the small­er city-states” That’s from a his­to­ry book that I put into it, and when you search that in Google, it comes up with noth­ing. So it’s real­ly dif­fi­cult to dis­cern that this is a piece of copy­right­ed content. 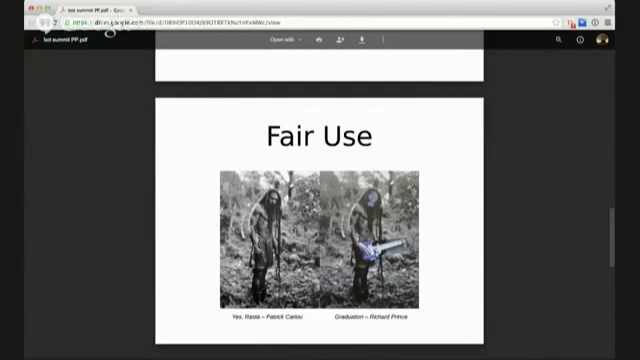 But in terms of Fair Use, I think it would qual­i­fy as Fair Use. It’s kind of jux­ta­pos­ing two dif­fer­ent sources togeth­er to cre­ate a pas­tiche, and there’s some legal prece­dence for it. On the left, this is ​“Yes Rasta” by Patrick Cariou, and this is ​“Graduation” by Richard Prince, and Cariou sued Prince for his use of his art­work in ​“Graduation” but [Prince] won in an appeal because the court found that this use was trans­for­ma­tive. So I think if the uses of the source are jux­ta­posed in a way that lets you cre­ate a new read­ing and way to look at the sources, then it could be Fair Use.

If for some rea­son some­one man­aged to fig­ure out that it was using copy­right­ed mate­r­i­al and decid­ed that they did not want it used in the bot, they would have to file a DMCA request to Twitter. Twitter’s received about 10,000 of them in six months, and about 76% of the mate­r­i­al affect­ed by the take­down requests were removed. Only 18 counter-notices were sent and 100% of them were suc­cess­ful. So I think that if some­one were to con­test the bot’s use of it, I don’t think the DMCA take­down would be suc­cess­ful. And accord­ing to the DMCA, the per­son send­ing the take­down request has to con­sid­er the pos­si­bil­i­ty of Fair Use before send­ing the request.

And that’s all I have. Thank you. But I some dis­cus­sion ques­tions. How much do you think a bot would have to alter its cor­pus for it to be trans­for­ma­tive? If it just had one source and it fed it through a Markov chain, could that poten­tial­ly count as a trans­for­ma­tive use?

Darius Kazemi: Thank you for the prompt there. We have some time for dis­cus­sion for this. Nick

Nick Montfort: A num­ber of legal fac­tors [inaudi­ble] short phras­es are not afford­ed copy­right pro­tec­tion and what exact­ly a short phrase means is a ques­tion that requires some legal research and that is prob­a­bly not entire­ly clear. But that would also be an issue for tak­ing lit­tle bits of text and using them in a bot.

Erin McKean: It has some bear­ing, how long the source text is. So that’s why a line from a song lyric is often more con­tentious than a line from War and Peace.

Nick: And also how aggres­sive the intel­lec­tu­al prop­er­ty own­ers are.

[The ​“Audience #” com­ments below are from peo­ple off-screen. Tried to keep them all dis­tinct, but there may be errors in attribution.]

Audience 1: I’m an awful per­son. I don’t remem­ber who actu­al­ly made the Top Gun-tweeting robot.

Audience 1: Because I remem­ber that got DMCA’d. I just don’t know if Ramsay nev­er sent an [appel­la­tion?] or if that was—

Darius: I don’t think he filed a counter-claim, but we could ask. He’s not in the chat.

Audience 1: It’s the only thing I’m aware of that I’ve actu­al­ly seen that hap­pen to in the bot community.

Darius: For those who don’t know, Ramsay’s Top Gun bot was called 555 µHz and it basi­cal­ly sam­pled the movie Top Gun once every twenty-four frames and showed each frame of the movie, with sub­ti­tles. So over time, in the­o­ry, it’s like watch­ing Top Gun over the course of six months or some­thing. His idea was that it was trans­for­ma­tive, and who­ev­er owns it, Warner or I for­got who owns it, was like, ​“No. This is not trans­for­ma­tive, you’re just show­ing the movie very slow­ly.” Paramount, it’s Paramount. Thank you Zach in chat.

Audience 1: I have a relat­ed ques­tion. I won­der if you know the nature of those DMCA requests. Like how many of them were for exam­ple URLs to pirat­ed con­tent, or some­thing like that.

Audience 2: But is the copy­right­ed con­tent in the tweet?

Audience 1: I’m curi­ous how many of those were pure text, for example.

Darius: Right, where the tweet itself was the copy­right­ed con­tent ver­sus just link­ing to pirat­ed stuff. That’s an inter­est­ing ques­tion as well. It’d be inter­est­ing to see a study, if pos­si­ble, of all the DMCA stuff, if it’s even avail­able. People are men­tion­ing Chilling Effects in the IRC chat. That’s a web­site that tracks these take­down notices, so maybe that could be mined for more infor­ma­tion about this.

Brett O’Connor: This isn’t real­ly a legal-related thing, but I do recall once see­ing a tweet to Olivia Taters, Rob’s bot, that was some­one say­ing, ​“Why did you just take my words and then mix them up.” I’m won­der­ing if any­body has had any­body con­tact them—

Darius: That hap­pens all the time with my bots. I have one called Professor Jocular that finds tweets that are Favstar fave of the day, so they’re usu­al­ly jokes, and then attempts to make a real­ly poor descrip­tion of why it’s fun­ny. I don’t @-reply peo­ple because that would get flagged for spam, but I do .@-reply their names so that there’s at least some kind of attri­bu­tion going on there. So I try to attribute, but still peo­ple respond and they’re just like, ​“Tweet steal­er! Joke steal­er.” Because there’s this whole—especially in com­e­dy Twitter—there’s this whole who stole whose joke, who was the first one to tell this Twitter joke, all that sort of thing. And some­times it’s not steal­ing, it’s just a real­ly awful, banal joke that any­one has come up with mul­ti­ple times. Other times there are real­ly great, fun­ny peo­ple on Twitter whose jokes then just get stolen by those TED par­o­dy accounts, so yeah. I get it all the time.

I’ve seen it hap­pen more than once to Olivia, and basi­cal­ly any­thing that sources text that is then re-presented in an iden­ti­fi­able form, it’s pos­si­ble some­one will find that and use it. I like Allison’s Pizza Clones. [It] does an inter­est­ing thing with attri­bu­tion where you embed the tweets that you’re tak­ing the text from, right?

Allison Parrish: Yeah. I don’t know if that’s the best way to do it but [inaudi­ble]

Darius: It’s inter­est­ing. And Olivia faves as attri­bu­tion. That’s why Olivia faves your tweets some­times. It means your tweet has been added to her [puls­ing?] database.

Audience 3: But that’s prob­a­bly what alerts the user.

Darius: Right, it does.

Audience 3: So that’s kind of cool.

Audience 4: By follow-up, 555 µHz, Ramsay did not do a counter-claim. Because he was­n’t sure about his options and the process seemed to be extreme­ly confusing.

Darius Kazemi’s home page for Bot Summit 2014, with YouTube links to indi­vid­ual ses­sions, and a log of the IRC channel.