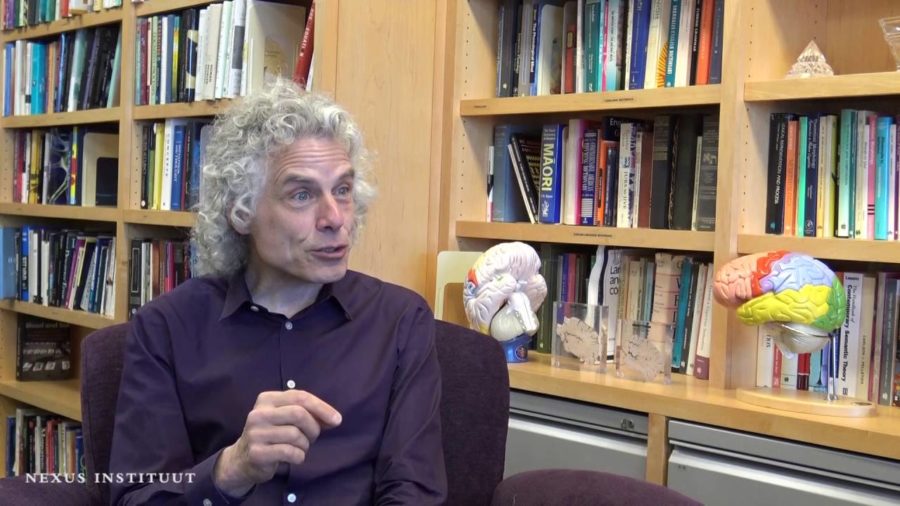 presented by Steven Pinker
in The Nexus Institute » Nexus Conference 2016: What Will Save the World?

Rob Riemen: Three years ago we orga­nized a Nexus Conference enti­tled ​“The Triumph of Science.” And we also had peo­ple from the world of a tran­shu­man­ism. And I was fas­ci­nat­ed by the fact that based on a pret­ty pes­simistic view on human nature, they think that due to the tech­nol­o­gy we are hav­ing we should improve human beings with this tech­nol­o­gy because the world is too dan­ger­ous, there are indeed nuclear weapons, and to make sure that the tragedies will not hap­pen we should use new tech­nol­o­gy to improve human nature. What do you think about that?

Steven Pinker: I’m very skep­ti­cal. First of all I’m skep­ti­cal that we need to reengi­neer humans to achieve peace. Canada and the United States have not fought a war since the War of 1812. No one had to reengi­neer Canadians or Americans. The Netherlands and Germany have not fought a war in more than sev­en­ty years. We did not have to genet­i­cal­ly engi­neer the Dutch. There are many changes to our insti­tu­tions and our norms and our ideas that can reduce or elim­i­nate the risks of nuclear war with­out what I con­sid­er a rather quixot­ic attempt to change the course of human evolution.

I’m also, on pure­ly sci­en­tif­ic grounds, high­ly skep­ti­cal of the prophe­cy that we will reengi­neer human nature. I think that these pre­dic­tions came dur­ing the brief burst of enthu­si­asm for find­ing the gene for intel­li­gence, the gene for altru­ism, and so on. We now know that there is no such ​“gene.” There are hun­dreds or thou­sands of genes, each of which are incre­ments or decre­ments psy­cho­log­i­cal traits by a tiny amount. To genet­i­cal­ly engi­neer some­one, it’s not a mat­ter of stick­ing in one gene. You’d have to replace thou­sands of genes. We have no idea how to do that. We’re not going to know how to do it any­time soon.

And we also don’t know how many of those genes might lead to an improve­ment in one aspect and a risk in anoth­er aspect. There may be a gene that increas­es your IQ by two-thirds of a point but also increas­es your chances of get­ting brain can­cer or bipo­lar dis­or­der by a third of a point. And it’s going to be a very long time, if ever, until we know how to bal­ance those tiny ben­e­fits and tiny risks mul­ti­plied by hun­dreds or thou­sands of genes. So on pure­ly sci­en­tif­ic grounds I doubt that it’ll hap­pen. And then on his­tor­i­cal grounds I don’t think we need it.

Riemen: What will be your choice, what is it that you think is essen­tial to make sure that, in what­ev­er form, ​“we can save the world?”

Pinker: We have to first of all have an empir­i­cal mind­set. You’re right, there are many hypothe­ses. We have to look to see which ones have made the world bet­ter and which ones have made the world worse. I think the track record of mes­si­ahs is not par­tic­u­lar­ly good. I think there’s an excel­lent rea­son to believe that there’s no such thing as a mes­si­ah and there nev­er will be.

On the oth­er hand, there are some things that do work. International insti­tu­tions like the United Nations has decreased the prob­a­bil­i­ty of war. It has­n’t elim­i­nat­ed war, but it’s made it less like­ly. We have rea­son to believe that trade and cos­mopoli­tanism, the move­ment of peo­ple and ideas, has been a pos­i­tive force. We have rea­son to think that democ­ra­cy has more advan­tages than dis­ad­van­tages. And I think what we have to do is not believe that we can deduce what will make the world bet­ter from first prin­ci­ples and then impose them in full con­fi­dence that we know how the world is going to react. Because we don’t. We’re not that smart. But we real­ly have to look at our past track record, look at the data. What makes peo­ple bet­ter off? What makes peo­ple worse off?

Riemen: Now, the con­fer­ence will be the week­end after the American elec­tions. Will you still say the same things if Mr. Trump will be the next President of America?

Pinker: I think it’s extreme­ly unlike­ly, and all the indi­ca­tors are that he will not be the next pres­i­dent. If he is pres­i­dent, I think that that would be def­i­nite­ly a neg­a­tive devel­op­ment. And there’s no guar­an­tee that all pos­i­tive trends, such as the trend toward tol­er­ance, cos­mopoli­tanism, democ­ra­cy, knowledge-guided decision-making, will con­tin­ue. There are no iron laws that pro­pel the world in a par­tic­u­lar direc­tion. There are con­tin­gent events that are unpre­dictable, so bad things could happen.

How bad could it be? Much depends… That is, if Trump were elect­ed, much depends on how much a sin­gle man can con­trol the entire appa­ra­tus of American gov­ern­ment. Fortunately, American gov­ern­ment has some checks and bal­ances built in. There’s the Supreme Court. There’s the leg­is­la­tures. There’s local gov­ern­ments and state gov­ern­ments. And just the will­ing­ness or reluc­tance of the American peo­ple to go along with par­tic­u­lar poli­cies. So as long as Trump does­n’t become the Führer, or like Mao, with absolute con­trol (and I think that’s that’s unlike­ly), then the worst-case sce­nar­ios prob­a­bly will not hap­pen. But then, Trump being elect­ed is itself a worst-case sce­nario that I think will prob­a­bly not happen.

Riemen: Okay. Thank you very much, Steve Pinker, and we are very much look­ing for­ward to meet you again in Amsterdam.