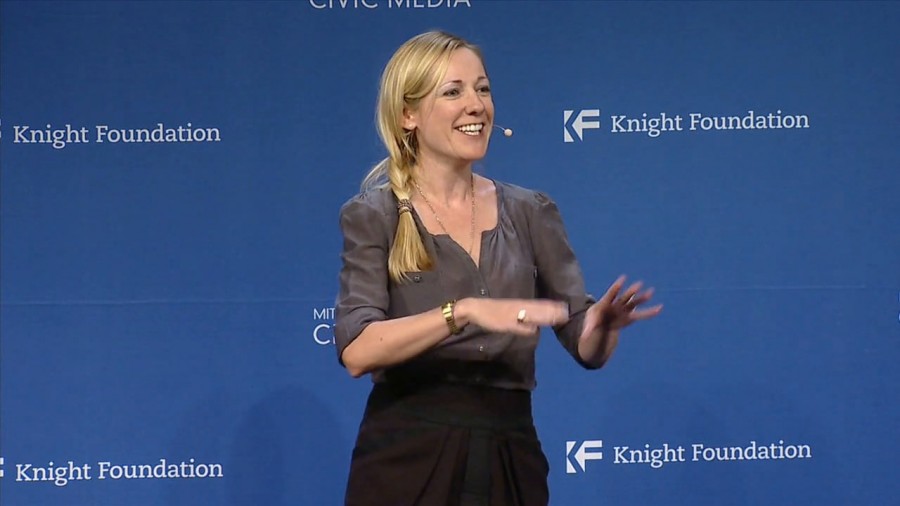 How to Social Engineer Your Child through Minecraft

Today I want to talk to you about how you too can social engi­neer your child through Minecraft. First off, this is not a pre­sen­ta­tion for any kind of par­ents. There are some par­ents that are not going to be inter­est­ed in this, for instance if you want your child to be hap­py and you’re fine with that. Or if you’re fine with your child becom­ing an artist, or oper­at­ing a B&B in Maine. This is not a pre­sen­ta­tion for you. I’m look­ing for tiger moth­ers and tiger fathers. 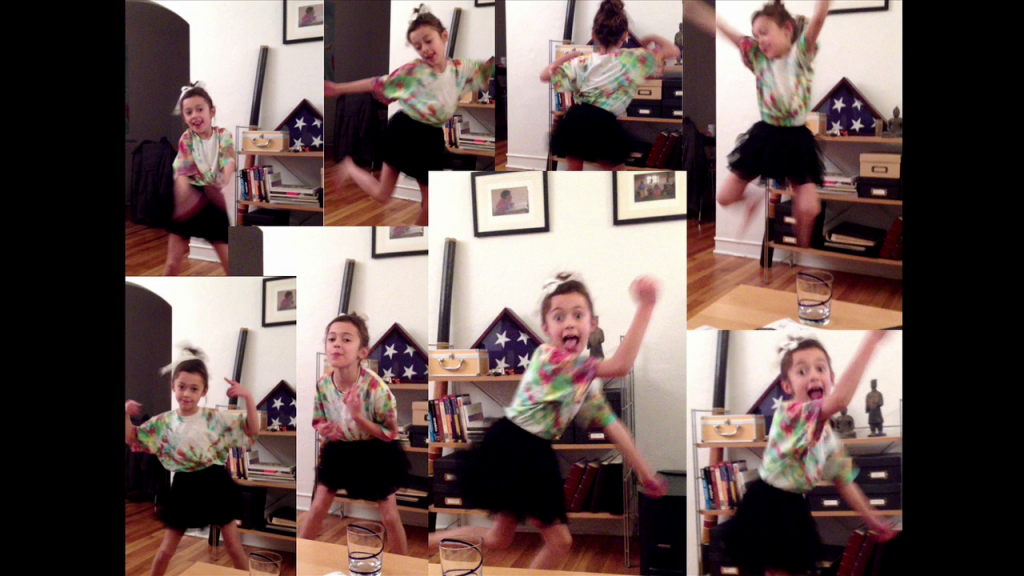 This is the child in ques­tion. She’s 9. You can see her involved in some une­d­u­ca­tion­al, non-productive activ­i­ty, and I’m not going to allow this to con­tin­ue. Thankfully, she loves Minecraft, and that’s great. This is how Minecraft starts: 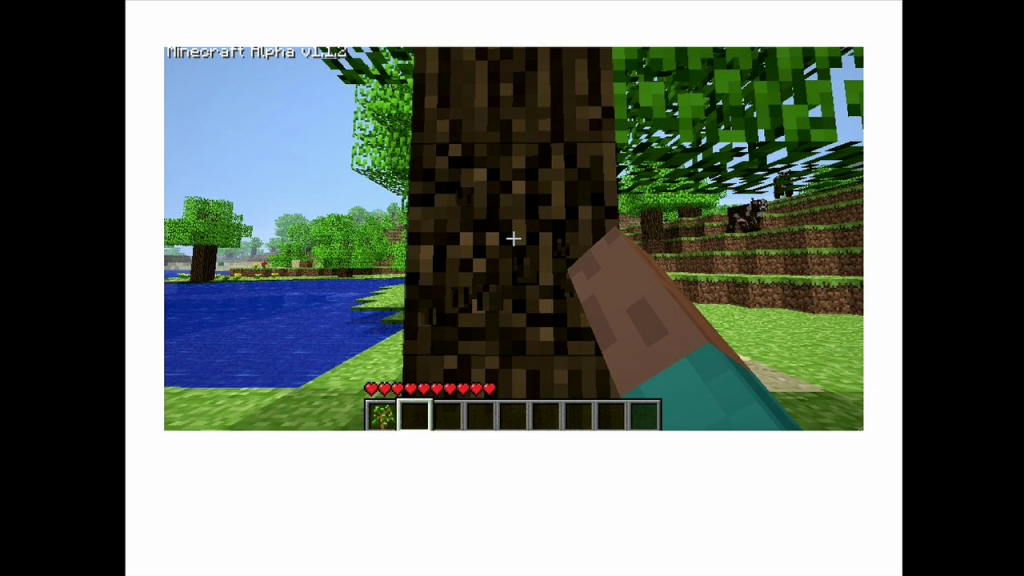 You are dropped into a world with noth­ing except your hand; that’s your hand on the side there. You find a tree and you chop it up, you make planks of wood and sticks. With that you make pick­ax­es, you mine for rocks, you build hous­es. Sometimes you fight zom­bies, but most­ly you build houses.

So it’s not sur­pris­ing that when I ask my daugh­ter what she thinks she’s learn­ing from Minecraft she says, ​“Hmm, wood is impor­tant?” But of course there’s much more to learn from this game that does­n’t real­ly have a goal. But there’s real knowl­edge to be gained from Minecraft. For instance there’s some­thing called red­stone in Minecraft that stands for elec­tric­i­ty. You can actu­al­ly build circuits. 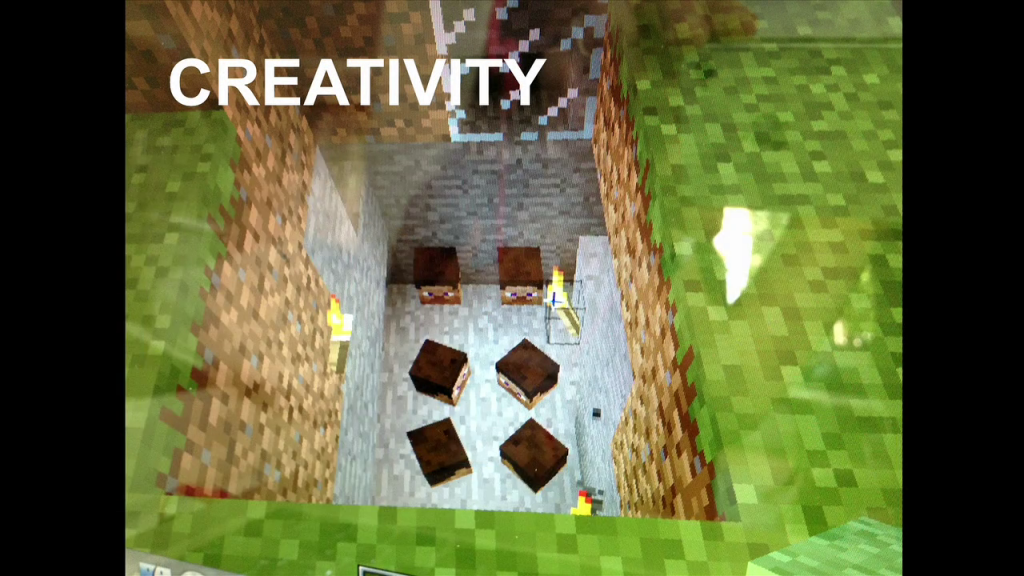 It also obvi­ous­ly fos­ters cre­ativ­i­ty. For instance, if you want to dec­o­rate your house with a pit of sev­ered heads, like my daugh­ter did, you can. It’s possible. 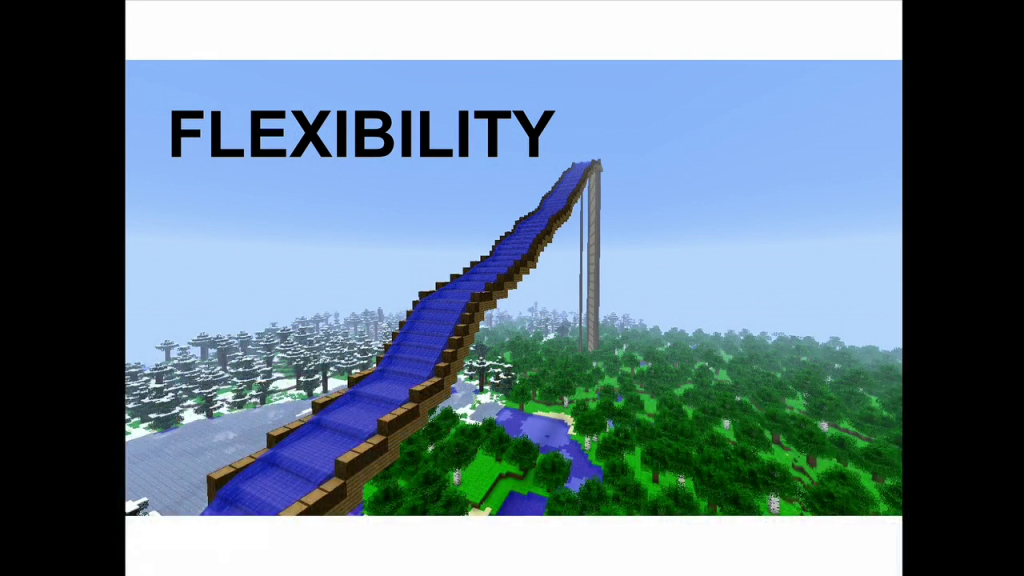 Minecraft also fos­ters flex­i­bil­i­ty. This is a study done in Sweden about how kids that play with Minecraft are very apt to scratch their plans when they dis­cov­er new resources or new tricks in the world. For instance, these kids want­ed to build a vil­lage, but they changed their plans when they dis­cov­ered that they could car­ry water in buck­ets, and instead they did a water slide. 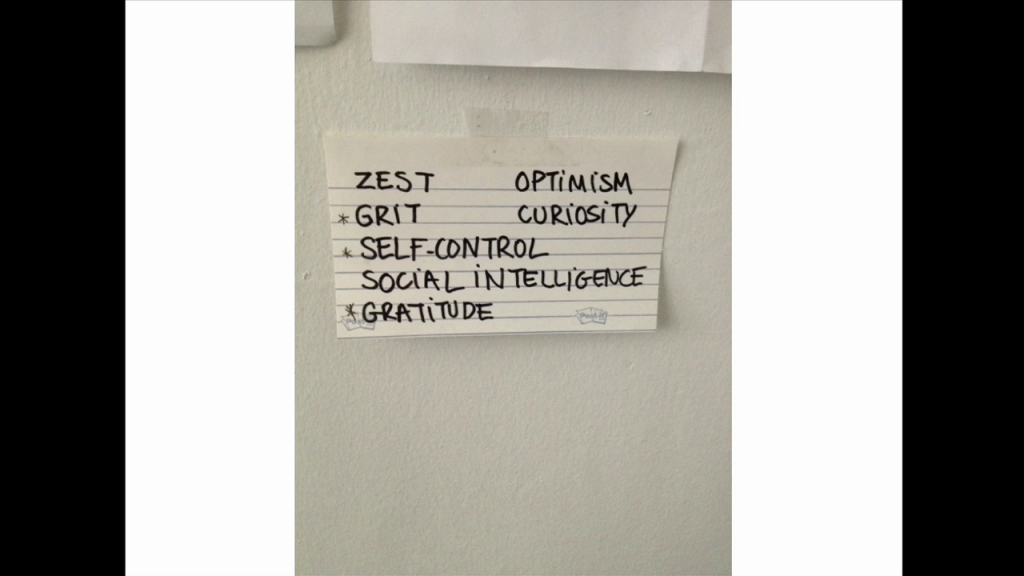 So does Minecraft help me with this? For instance, there’s a prob­lem of the tree­house. My daugh­ter builds giant hous­es on top of tiny lit­tle trees, and she knows enough physics to know it’s not pos­si­ble in real life. So what’s the point? I called Katie Salen, and I asked her that. She said it does seem that build­ing impos­si­ble archi­tec­ture would be a waste of time. But what real­ly hap­pens is that when the kid then goes out in the street, finds a tree, will look at the tree and start ask­ing ques­tions like, ​“Could I put a house on that tree? Why not? What would I need to change to actu­al­ly make it hap­pen?” And that puts the kid into a mind­set of problem-solving, and that’s real­ly valuable.

But there’s anoth­er thing that I want­ed to teach my kid through Minecraft, and it’s to be brave. It says on the web site ​“brave play­ers.” But when she plays in Minecraft, my daugh­ter is very risk-averse. She avoids any kind of [inaudi­ble]. She does­n’t fight the zom­bies. So I asked Katie, because I had her on the phone, and she said brav­ery real­ly is grit and per­se­ver­ance. And you can cul­ti­vate that by set­ting your­self chal­lenges and achiev­ing them, then shar­ing the results on a plat­form like DIY to get peer feed­back, or par­ent feed­back. That’s real­ly impor­tant because that’s your reward, and the kid will be more amenable to tak­ing risks if there’s a reward. That’s my favorite part of Minecraft, that we talk a lot about what’s going on inside her Minecraft world, and we research ways to do things togeth­er on YouTube, and we bond over it. 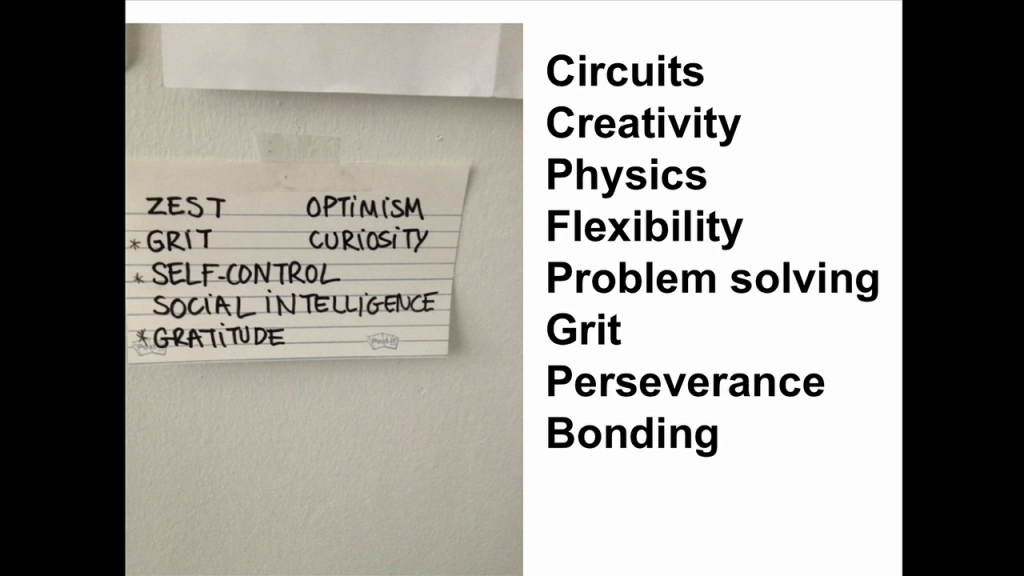 So these are the things that Minecraft can teach, and it’s not real­ly that much dif­fer­ent from my orig­i­nal list. And it’s not so bad for a sim­ple video game. So now the only thing that I have to wor­ry about is how to han­dle the pit of sev­ered heads.