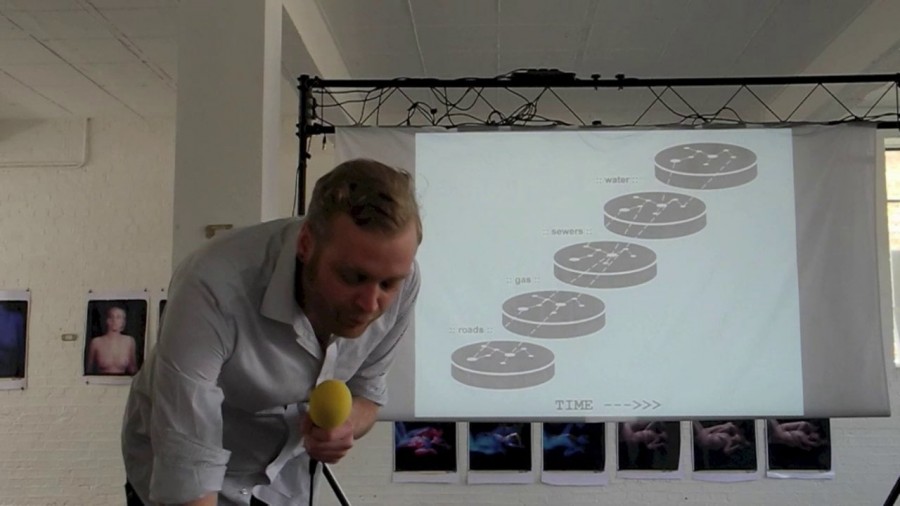 When I was sev­en­teen, I was diag­nosed with Crohn’s Disease, which is an auto-immune dis­ease and it’s a per­ma­nent infec­tion in my gut and bow­el. It real­ly sucked, and I was in hos­pi­tal and I almost died. When I came out of hos­pi­tal, I was tak­ing about six­teen tablets a day, and if you include all the painkillers and sup­ple­ments I was tak­ing, I was tak­ing about twenty-four or twenty-five tablets a day. One oper­a­tion and about a decade lat­er, I’m still tak­ing tablets. I’m not sure if you can see those, but these are the tablets I take every sin­gle morn­ing, and I take two more of those big white ones in the evening. And the 5p is there for size reference.

And it’s because I take these tablets every day, I have to think about every­thing else that relates to those. So, do I have enough, I’m going on hol­i­day, do I need to go get some more tablets, run around and get a repeat pre­scrip­tion. I’m going out tonight, can I get into the pub if they search me if I’ve got my tablets on me. I’m stay­ing at some­one’s house, is my cache of meds that I’ve got split all over dif­fer­ent peo­ple’s hous­es in London, are they there as well? And because I have to think about this twice a day, not dying has always been fair­ly high up my list of men­tal priorities.

So in 2011 I came across this talk called Infrastructure for Anarchists, and its sis­ter talk Avoiding Capitalism for the Next Four Billion, which was by Vinay Gupta at the 2009 Temporary School of Thought. In that talk he talked about Simple Critical Infrastructure Maps, or SCIM. You can find the doc­u­ments, resources, and all the var­i­ous graph­ics and images at resiliencemaps​.org if you want to check them out. 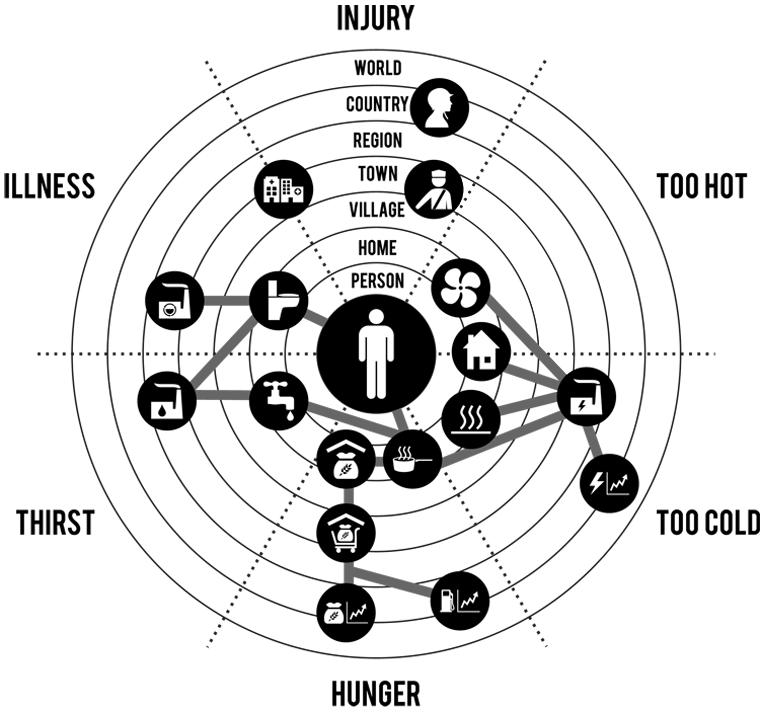 These maps were orig­i­nal­ly designed to allow some­one to ori­en­tate them­selves around the infra­struc­ture and they exist inside in the event of a cri­sis. The way it does this is by plot­ting the six ways to die: too hot, too cold, ill­ness, injury, hunger, and thirst. If you’re not dying of one of these six things, then you’re going to be dying of old age. Then what it goes on to do is that it puts the indi­vid­ual at the cen­ter of the map and then con­cen­tri­cal­ly mov­ing out from the indi­vid­ual, we move through those spaces up to the world lev­el. And then it maps infra­struc­ture, or the means of not dying, against those con­cerns. So if you can see on the graph­ic, see there’s cook­ing. Everybody needs to eat. That’s relat­ing to the elec­tric­i­ty grids, which is relat­ed to the inter­na­tion­al ener­gy mar­kets. The cook­ing is also relat­ed to how and where you store your food, and that’s relat­ed to where you get your food from, the deriv­a­tive mar­kets, and the fuel mar­kets. You also need fresh water to eat and cook, so that’s relat­ed to your source of fresh water, and the munic­i­pal water sys­tem. You’ve got waste and then the wider san­i­ta­tion system.

So this in a very sim­ple sense is the Stack, or the infra­struc­ture mapped around us against the means of not dying. It’s this infra­struc­ture that is unseen, because it is infra-structure, it is under the struc­ture. And when you start think­ing about this mas­sive web of tech­nolo­gies that keep you alive, the only inter­faces we have on a day-to-day basis are tap, turn, flush. Everything else is hid­den and unseen. Paul [Graham Raven], who’s not here yet, who’s speak­ing lat­er, he calls this ​“prob­lema­tiz­ing the tap from the oth­er side of the wall.” 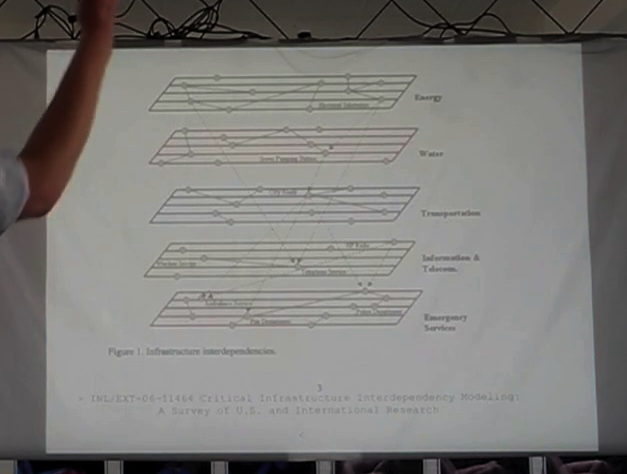 This is an infra­struc­ture depen­den­cies map, and you can see this is the stack of tech­nolo­gies, the var­i­ous dis­crete lev­els of infra­struc­ture which are ver­ti­cal­ly aligned and yet inter­de­pen­dent on each oth­er. This in its crud­est dia­gram is an exam­ple of the Stack, with its dif­fer­ent lev­els of ver­ti­cals. Benjamin Bratton, who’s writ­ing a book called The Stack pri­mar­i­ly talk­ing about the Cloud, gives us some con­cep­tu­al lan­guage around the dif­fer­ent parts of the stack as you move up and down these ver­ti­cals. I find them quite use­ful in con­cep­tu­al­iz­ing these things. 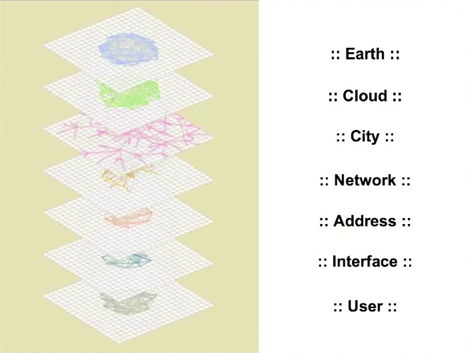 Then there’s the SCIM maps, which the more I’ve thought about them, it’s almost as if the Stack, the vertically-aligned infra­struc­tures have been turned on their sides and now you’re sort of peer­ing down this cone of infra­struc­tures out from the world lev­el, down to the indi­vid­ual lev­el, and see­ing inter­de­pen­den­cies which they have.

I don’t know if it’s because I’m a [sci-fi?] nerd or because I reject the idea that the his­to­ry of civ­i­liza­tion is the his­to­ry of great men, but I’ve always believed that the his­to­ry of tech­nol­o­gy is the his­to­ry of civ­i­liza­tion. So time is also a fac­tor when we’re think­ing about the stack. Jo Guldi, who’s the author of a book called Roads to Power, Britain Invents the Infrastructure State, talks about how the rea­son that the English gov­ern­ment got involved in road-building dur­ing the Enlightenment was essen­tial­ly to open up trade between Wales and Scotland because their premise or their thought was that if we open up trade between these regions, then the Welsh and the Scots will stop hav­ing bar­neys with the English.

Municipal infra­struc­tures like gas, sew­ers, and water, these are the 19th cen­tu­ry infra­struc­tures, which are very Victorian in their think­ing. They’re very com­mand and con­trol. You build a big water plant on the out­side of town and then you con­nect every­one to it, but all of the busi­ness is secured in one place. And then of course we can go up through the stack. We have the inven­tion of the elec­tric­i­ty grid, com­mu­ni­ca­tions, and then the Internet, and then even satellites.

One of the prob­lems with think­ing crit­i­cal­ly about tech­nol­o­gy is that you could pejo­ra­tive­ly be brand­ed a Luddite. But that’s okay because one of the things the Luddites under­stood was that cer­tain tech­nolo­gies inter­nal­ize cer­tain ide­olo­gies, which is why when they went into the fac­to­ries they only smashed cer­tain types of machines and not all of them.

In this sense the stack, not only is it ver­ti­cal aligned but it also leans through his­to­ry. And what that means is the inter­nal bias­es of these lev­els of the stack, they car­ry with us through time. So until those lev­els of infra­struc­ture are gone or have been replaced, we’re still sub­ject to their invis­i­ble biases.

So who con­trols the stack? It’s a bit more of a per­ti­nent or pub­lic ques­tion and it’s in the media in light of the PRISM and NSA scan­dals, with their access to the infra­struc­ture lev­el of the Internet. We can also think about Israel turn­ing off the water to Gaza in 2005. They turned the entire water grid off just long enough for all of the plants to die in the green­hous­es, and then they turned it back on again, and they’ve done it a num­ber of times since.

For me when I think about it, these are my tablets in this bag here. This is part of my per­son­al infra­struc­ture, and the white ones are man­u­fac­tured under license by Ferring in Denmark, dis­trib­uted with­in the EU, and the com­po­nent part of them which is mesalazine is under eleven inter­na­tion­al patents, nine of them world­wide. Do I have a moral right to the access to these tablets, and if I could, do I have the right to make my own? So one of the things for me is to see the invis­i­ble, the invis­i­ble bias­es imbued in these things, under­stand the infra­struc­ture around them, and then try and do some­thing about it. And that for me is Stacktivism.