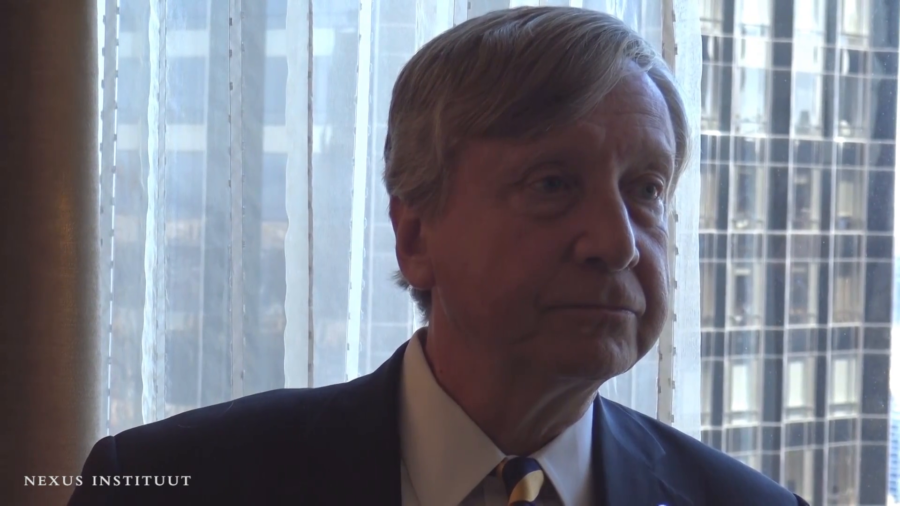 Sean Wilentz on Donald Trump and the Crisis in American Democracy

presented by Sean Wilentz
in The Nexus Institute » Nexus Symposium 2016: Democracy Today in the USA

Rob Riemen: You wrote a huge book on democ­ra­cy and the his­to­ry of democ­ra­cy in America. When you read that phe­nom­e­nal book, one of the things you start to real­ize that every­thing that’s going on now with Trump and the GOP, Republican Party, and that in a cer­tain way, there is not that much new. What’s going on in American democ­ra­cy that you always have had those extremes?

Sean Wilentz: Well, there are always these ten­sions in American life. Tensions about eth­nic­i­ty, of class, of race to be sure, that get recom­bined into dif­fer­ent per­mu­ta­tions and com­bi­na­tions of those forces. They evolve, they take on dif­fer­ent shapes. But they’re there, and they’re always there. I don’t think we’ve had any­body quite like Donald Trump before, in terms of the pol­i­tics of celebri­ty, which is what I think he’s real­ly about. It’s not sim­ply that he’s rich. We’ve had rich peo­ple in pol­i­tics before. He’s not sim­ply a busi­ness­man. We’ve had busi­ness­men in pol­i­tics before.

But to be able to build up this kind of dem­a­gog­ic celebri­ty, that is some­thing that we’ve nev­er quite seen before in quite that way. But he’s play­ing on very old themes. He moved up in the polls very dra­mat­i­cal­ly when he start­ed talk­ing about Mexican immi­grants and build­ing a wall and all the rest of it, tap­ping into a kind of nativist frus­tra­tion that’s been there in American pol­i­tics for a very long time.

It’s com­bined with an anti-political, or anti-politician, note which always has been a part of American nativism, I should add. I mean, nativism is not only about the immi­grants. It’s also about the cor­rupt polit­i­cal sys­tem that is [?] with the immi­grants, that lets them in. He’s played that to a T. So in some ways, you could look at Donald Trump and look at the nativist move­ment of say the 1850s, and imag­ine not much has changed. That’s true. But the sit­u­a­tion is dif­fer­ent, and Trump is dif­fer­ent, and the kinds of…you know, America’s dif­fer­ent. So, mutatis mutan­dis. But the themes are still very much there.

Riemen: What is not dif­fer­ent is that when Alexis de Tocqueville came to America and wrote his great book On Democracy in America, he wrote it for Europeans. He wrote it, as he writes in his pref­ace, that we Europeans have to under­stand what’s going on in America because it will come to Europe as well. Now with these elec­tions, you hear a lot of times, the sys­tem is bro­ken. How democ­ra­cy’s dys­func­tion­al. What is true about that? Again, for us Europeans impor­tant to know because you know, it may come to Europe as well.

Wilentz: I don’t think that American democ­ra­cy’s bro­ken. I think American democ­ra­cy’s in a cri­sis at the moment, a polit­i­cal cri­sis. But it’s going to be worked out one way or the oth­er. They say there’s noth­ing bad with America that one good elec­tion can’t cure. Well, that’s an opti­mistic view; it’s also mine. You can also have a bad election.

But at the moment, 2016, I do think we’re at one of those cross­roads, where… I mean, Lincoln talked about the house divid­ed in 1858; it was about slav­ery. The coun­try was going to become either one thing or the oth­er. I think we’re at a cross­roads like that now in 2016. If we go in one direc­tion the Republican Party, which has become a very very con­ser­v­a­tive par­ty, to say the least, will have con­trol of every lev­el of American gov­ern­ment and would then retake the the Supreme Court. That would be a very dif­fer­ent out­come than if the Democrats won. But the Democrats would then be appoint­ing peo­ple to the Supreme Court. Would pre­sum­ably have con­trol of the Senate as well as the White House. And maybe even make gains in the House. Those are stark­ly dif­fer­ent paths, giv­en the the nature of the par­ties today. So we are at that moment right now but. But what we see as the dys­func­tion I think is just a pre­lude to the set­tle­ment of that cri­sis, one way or the other.