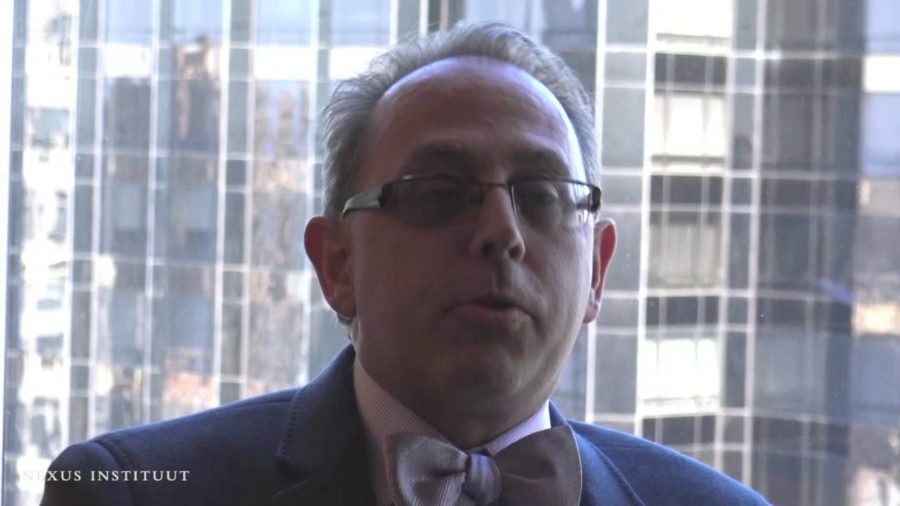 presented by Roger Berkowitz
in The Nexus Institute » Nexus Symposium 2016: Democracy Today in the USA

Rob Riemen: It’s still for many peo­ple unimag­in­able, but imag­ine for a moment that Donald Trump will become President of the United States of America. Would it be ​“the end of American democ­ra­cy” or the begin­ning of a refresh­ment of American democracy?

You know, I think one of the mis­takes peo­ple make is that if they want to under­stand Hitler, they don’t read Hitler. You should read Mein Kampf. A lot of it was in there. So go and read The Art of the Deal, which is the book Donald Trump wrote. It’s not Mein Kampf. It’s not great lit­er­a­ture. But I think you can see page by page, step by step, what he’s doing as a Presidential candidate.

It’s a book about a busi­ness­man, who has a chip on his shoul­der, who wants to make deals because he thinks it’s fun. He actu­al­ly has fun mak­ing deals. And he takes very seri­ous­ly the fun about bring­ing peo­ple togeth­er and say­ing, ​“You’re gonna sell this guy that. He’s gonna sell you this. And he’ll sell me this,” and they say no, and he makes it hap­pen, right? Is he a bril­liant busi­ness­man? I don’t know. He’s lost a lot of mon­ey. He’s made a lot of mon­ey. He inher­it­ed some mon­ey. I’m not involved in that; I don’t care.

The President that I think Donald Trump will most remind peo­ple of if he becomes President is Andrew Jackson. Andrew Jackson was a gen­er­al, low-class, swore, cursed, did­n’t dress well… Really not what we think of as a gen­tle­man. And yet he was one of the most pow­er­ful and most impor­tant Presidents in the his­to­ry of America. He’s the one who real­ly made America into a democracy.

Prior to Andrew Jackson, America was a con­sti­tu­tion­al repub­lic, and Jackson start­ed the polit­i­cal par­ties as real polit­i­cal forces. And he start­ed fundrais­ing. He was the begin­ning of fundrais­ing for pol­i­tics in the United States. He was the begin­ning of a pop­ulist, demo­c­ra­t­i­cal­ly elect­ed President, who just ter­ri­fied the elites of this coun­try. Terrified them. And hat­ed them, and they hat­ed him. And he did away with the Federal Reserve, the National Bank of the United States, cur­rent­ly the Federal Reserve, against all their objec­tions. When the Supreme Court told him that he could­n’t kick the Indians—the Native Americans—off their land, he said, ​“Let the Supreme Court and their army stop me.”

He basi­cal­ly gov­erned as a pop­ulist, demo­c­ra­t­ic tyrant. And yet he was prob­a­bly the most pop­u­lar and demo­c­ra­t­ic pres­i­dent we’ve had. We sur­vive that. My hope is that Trump would­n’t be that bad and we’d sur­vive him, too. We may actu­al­ly get some good things from Donald Trump, just like there’s a lot of good things that came out of Andrew Jackson’s pres­i­den­cy. He’s con­sid­ered one of the most impor­tant pres­i­dents in the coun­try. He’s on the twenty-dollar bill.