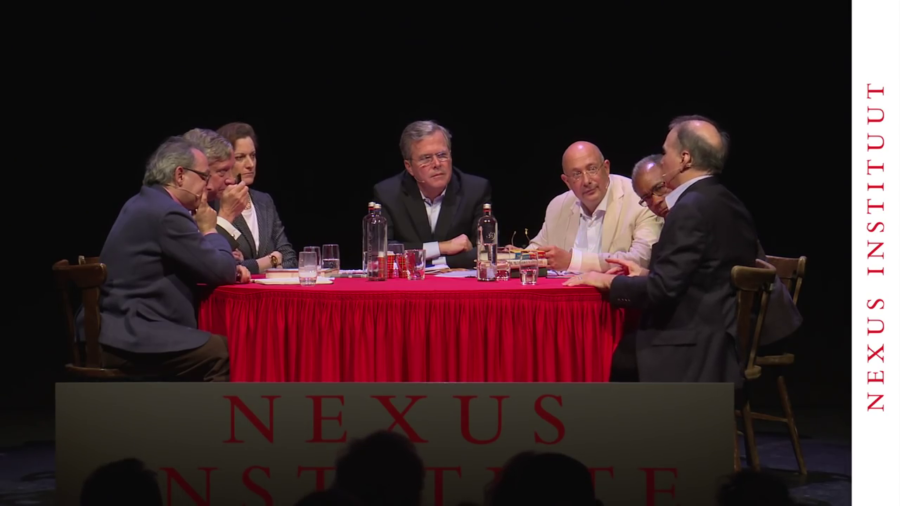 Anne Applebaum: Since you brought in Europeans, I do think it’s impor­tant that—and par­tic­u­lar­ly this audi­ence I’m sure sure agrees, to point out that Donald Trump is not an American phe­nom­e­non, sole­ly an American phe­nom­e­non. We see Trumps emerg­ing all across the West, all across Europe—Western Europe and Eastern Europe. And they are repeat­ing them­selves in very sim­i­lar ways. I think this is relat­ed to the cul­tur­al thing that you won’t let me talk about yet—

Jeb Bush: Talk about it.

Sean Wilentz: Get into it!

Applebaum: Can I say it? Okay. Okay, there are three points to make about cul­ture, alright? Number one is to do with pop cul­ture. People have talked a lit­tle bit about Reagan and Reaganism. I recent­ly read a book about Reagan, it remind­ed me the degree to which Reagan was the embod­i­ment of the pop­u­lar cul­ture of his time. He was a Hollywood actor. He believed in the val­ues of Hollywood, which were by the way the val­ues of film com­pa­nies all across Europe and around the world. And the val­ues of Hollywood were good guys win, good tri­umphs over evil, the nice guy gets the girl… And those were the kinds of things—you can laugh at it and peo­ple did—but those were the things that peo­ple looked up to and admired.

What does Trump embody? He embod­ies the val­ues of real­i­ty tele­vi­sion. Reality tele­vi­sion is some­thing we have in the Netherlands, we have it in France, we have it in America, we have in Britain. Who wins in real­i­ty tele­vi­sion? The most vul­gar, the loud­est… Who does­n’t get vot­ed off the island? It’s often the per­son who shoves the oth­er peo­ple aside. And this is the most pop­u­lar form of enter­tain­ment in the West right now. And he comes from it, he was of it, he embod­ies it, he reflects its val­ues, peo­ple under­stand what he’s doing. The most bril­liant analy­sis of Trump I’ve seen was some­body who ana­lyzed him by com­par­ing him to the vic­tors of real­i­ty tele­vi­sion series. He is lit­er­al­ly doing what they do in order to win the con­test. That’s what he is. That’s how you win.

The sec­ond point is to do with the nature of the Internet, and the nature of polit­i­cal infor­ma­tion now. Which is exact­ly the same in the United States and Europe. And we spoke about this a good deal last night. The Internet has changed the way in which peo­ple receive news. People don’t receive news from news­pa­pers direct­ly, or from tele­vi­sion direct—although to some degree they still do. They receive it from their friends, and from their social net­works. Which means that it’s curat­ed and sep­a­rat­ed in a way that it nev­er used to be.

And this has a num­ber of effects. One of them—there was a very bril­liant thing that The Wall Street Journal did a cou­ple of days ago which is it put up on one page a lib­er­al Facebook feed and a con­ser­v­a­tive Facebook feed, and you can—I high­ly rec­om­mend you look at it. You can press on a but­ton and see what the con­ser­v­a­tives are say­ing right now about I don’t know, Hillary Clinton or ter­ror­ism, and what the lib­er­als are say­ing. And they are com­plete­ly dif­fer­ent worlds. They live in com­plete­ly dif­fer­ent uni­vers­es. And part of what’s under­ly­ing the prob­lem that the gov­er­nor described of peo­ple not being able to talk to each oth­er is that we now have polit­i­cal systems—and this is, I live part of the time in London and part of the time in Poland. And this is under­ly­ing the grow­ing gap between the par­ties. And the rea­son why peo­ple can’t have a shared con­ver­sa­tion is because they lit­er­al­ly don’t have the same facts any­more. They don’t see the same reality.

And I promise you that’s true in Poland. I under­stand that it’s to some degree true here. People sim­ply don’t see the same num­bers, the same— I’m watch­ing right now the Brexit cam­paign. There’s one num­ber that the out cam­paign keeps cit­ing, which is that Britain pays £350 mil­lion pounds a week to Europe. This is a fic­ti­tious num­ber. It has been proved over and over again that this is wrong. This is not the real num­ber, there are num­bers you can come up with it, it does­n’t reflect any­thing. It’s not a num­ber that you will imme­di­ate­ly get back from Europe and you’ll be able to spend it on the National Health Service. It’s fake.

Nevertheless, they use it, they put it on the side of their cam­paign bus­es, they put on posters, they use it over and over again—it does not mat­ter how many times it’s debunked or how many fact-checking web sites take it apart. This is sim­ply not part— You can’t do that any­more, the debate. So you now have com­plete­ly sep­a­rate worlds. And how do you even have democracy—and this is not an American prob­lem, this is a prob­lem of the West. How do you have democ­ra­cy now, if the demo­c­ra­t­ic nations aren’t talk­ing about the same thing? And don’t agree on what’s hap­pen­ing. You can’t ana­lyze, you can’t solve a prob­lem if you don’t agree on what it is.

And so you know, the sta­tis­tics about ter­ror­ism, the sta­tis­tics about immi­gra­tion, they are com­plete­ly dif­fer­ent depend­ing on which form of media you’re read­ing. And that makes ratio­nal and sen­si­ble debate impos­si­ble. And that’s why you have so many—you know, we know in this coun­try, we know in France, we know in Poland, we know in Hungary—there are so many exam­ples now of politi­cians who are able to oper­ate on com­plete­ly pho­ny views of real­i­ty and sell them to peo­ple, because they can see it on the Internet.

The sec­ond effect…I mean, there are mul­ti­ple, but the sec­ond effect is that the onslaught and cas­cade of infor­ma­tion that peo­ple now have in democ­ra­cies deval­ues the polit­i­cal process—you know, ruins the…under­mines—that’s the word I want, under­mines polit­i­cal speech. I mean, you read so much, there’s so much infor­ma­tion, there’s so much news. Some of it’s true, some of it’s false. Can you real­ly believe any of it? Are any of these peo­ple up there real­ly telling you the truth? Aren’t all those guys lying? Who do you believe? Who’s authen­tic, you know. Maybe Trump is authen­tic because he shouts loud­er. Maybe Bernie Sanders is authen­tic because he wants to attack rich people—because he’s old, you know. He’s not media-friendly—no, I’m seri­ous. He looks not—he’s not a made-up politi­cian, you know. So he looks like an authen­tic per­son. Jeremy Corbyn leads the Labour par­ty in Britain for sim­i­lar rea­sons. He’s authen­tic, he’s real, you know. Never mind that his views are irra­tional and he’s advo­cat­ing poli­cies that did­n’t work the last time they were tried thir­ty years ago, you know. But because he seems authen­tic in an era when there’s so much garbage around, he has an appeal.

So we’re we’re not oper­at­ing in the same polit­i­cal cul­ture even of five years ago, you know.

Wilentz It seems to me that Trump has combined—because Trump is a real­i­ty tele­vi­sion guy, he gets to change his facts when­ev­er he wants to.

Appelbaum: And he’s done it.

Wilentz: So facts [crosstalk] have been—

Appelbaum: That’s how you win on real­i­ty TV.

Wilentz: —in this. Not just that we have dif­fer­ent facts, facts are oblit­er­at­ed. They have no mean­ing, any­more. More than that, when Donald Trump is asked where he got his infor­ma­tion he says, ​“I got it on the Internet.”

Roger Berkowitz: Or The National Enquirer.

Derek Shearer: You know, Sean… Sean, this is not entire­ly new. I mean, I’ve been involved in lots of cam­paigns. And I’ve always tried to tell my lib­er­al col­lege pro­fes­sor friends, cam­paigns are not edu­ca­tion­al affairs.

Shearer: It is not about facts. It is about emo­tion, about nar­ra­tive, about sto­ry. And I think we have to— I mean, every­thing Anne said is true, I think. But there’s a lit­tle more piece to the Trump sto­ry. He has a nar­ra­tive that explains the world—I argue this is the first actu­al elec­tion about glob­al­iza­tion. Because there’s a lot going on in the world, okay. And Trump puts it all into a neat sto­ry, you know. He’s got the bad guys, the Mexicans, and the Muslims, and the Chinese. They’re the bad guys. And he’s got real­ly clear, easy solutions—build the wall, build the tariff—and we’ll make America great. It is a believ­able sto­ry…if, you don’t spend a lot­ta time on you know, read­ing books or being a col­lege pro­fes­sor, and you’re pissed off. Plus he tells you he can’t be bought, so that’s prob­a­bly why his sto­ry is true.

Shearer: Well, but Noam at least actu­al­ly tries to have some facts. But I mean—

Shearer: —the point is that Bernie has a sto­ry. He has a nar­ra­tive line. And it appeals to his sup­port­ers just like Trump does. And you know, nar­ra­tive is very pow­er­ful in pol­i­tics. Emotion…emotional res­o­nance counts—

Appelbaum: Yeah but we used to be able to check that nar­ra­tive against some­thing real—

Shearer: Well no no. Yes.

Appelbaum: —and the crit­i­cisms of the nar­ra­tive would get through. And now they don’t. If you live in the con­ser­v­a­tive half of the—or the far-right, what­ev­er you’re gonna call it—piece of the Facebook world, you don’t get any­thing that con­tra­dicts that nar­ra­tive. You don’t ever see it. It does­n’t penetrate.

Shearer: That’s all true but I just don’t want to deny the pow­er of both—

Shearer: —of these can­di­dates, and the fact that look, the glob­al­ized world is pret­ty scary to a lot of people.

Shearer: And I think that we can’t fault what­ev­er there is of a glob­al elite, whether they’re lib­er­al or con­ser­v­a­tive, who said you know, ​“This is the great era. Everything’s fine, every­body’s going to get bet­ter, we have this won­der­ful glob­al­ized world,” and some­how nation­al­ism would go away… No. There are peo­ple who don’t like this world. That’s what the real revolt is of ISIS and oth­er groups. They are opposed to this glob­al­ized world. And you know, we haven’t tak­en that, I think, seri­ous­ly enough. It’s a much more com­pli­cat­ed issue than just you know, peo­ple are mis­us­ing facts or it’s the Internet.

Bush: Yeah, wait till the net­work movie about that comes out.

Berkowitz: But, on the oth­er side we have more resources to check facts now than we’ve ever had. All you have—

Appelbaum: Nobody believes them.

Appelbaum: Nobody believes them.

Berkowitz: I hap­pen to agree with you. But the point is you have the resources there. So the ques­tion is why are they not believ­ing them. Why aren’t they going to them. And what I wan­na sug­gest, and this prob­a­bly will not be pop­u­lar around here but who knows, is that the real issue here is that we have had an exper­i­ment that’s been going on, depend­ing on how you look at it, either since the 1930s or the 1960s. In either case it was a time when col­lege pro­fes­sors and college-educated peo­ple entered pol­i­tics in a mas­sive way, and col­lege edu­ca­tion became a dom­i­nant require­ment of pol­i­tics. And the peo­ple who are college-educated, what Hannah Arendt calls ​“problem-solvers,” have asked for a bar­gain: ​“Let us do it, and we’ll solve the prob­lems.” And over the last sev­en­ty years they failed. The prob­lems haven’t got­ten bet­ter. And I think the— Well, I don’t think edu­ca­tion’s got­ten bet­ter, I don’t think immi­gra­tion’s got­ten better—

Shearer: That’s not— That’s just not a true statement.

Shearer: Do you ever look at met­rics?

Berkowitz: Do I look at metrics—

Shearer: Yes. We have—

Berkowitz: Best, in what sense?

Shearer: That’s not true. What world, what world do you…live in?

Berkowitz: I’m in a university.