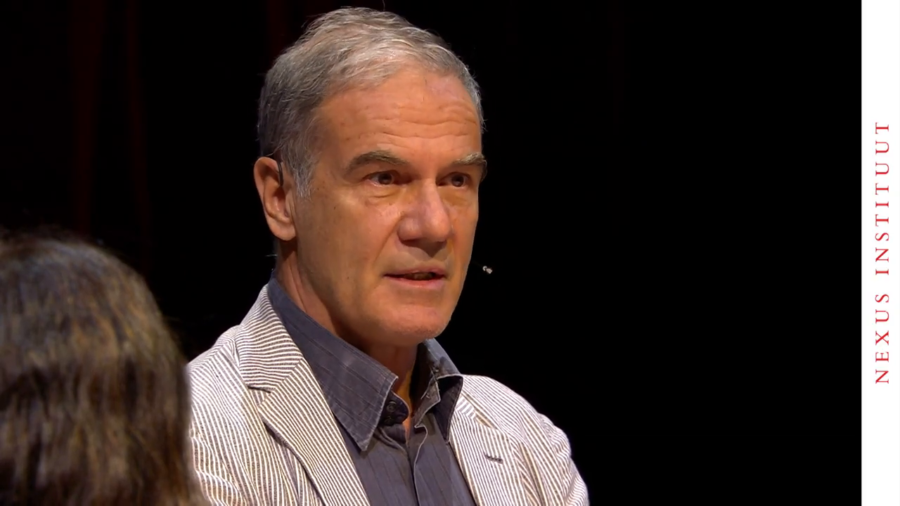 Edoardo Albinati: Yesterday com­ing to Amsterdam I was think­ing about the sub­ti­tle of this sym­po­sium that ends with the words ​“in a dis­put­ed age.” So this is sup­posed to be a dis­put­ed age. And I was remem­ber­ing for the hun­dredth time some won­der­ful vers­es by William Butler Yeats from a poem called ​“The Second Coming” in which he says more or less the best lack all con­vic­tions while the worst are full of pas­sion­ate intensity.

So in a way, if I am dispir­it­ed I’m quite hap­py to be, com­pared to the ones who are spir­it­ed now. I would like to make a sort of defense of a term that has been used in the very inter­est­ing debate between Mr. [Aleksandr] Dugin and Mr. [Bernard-Henri] Lévy. That is the word ​“nihilist,” or ​“nihilism.” I feel I’m one. And I’m not proud and not ashamed to be. At least in the sense that I’m very dif­fi­dent towards val­ues, any kind of. Because you know, val­ues can be very dan­ger­ous. And as the poem of Yeats says, the pas­sion­ate inten­si­ty in believ­ing in some­thing can be very dangerous.

I taught and I teach to peo­ple who belong or belonged to crim­i­nal orga­ni­za­tions who were full of val­ues. Who had val­ues for every [one] of us. And faith. They were faith­ful men. And pas­sion­ate. So, if this is a dispir­it­ed age, we should at least defend for awhile our sick­ness, our weak­ness, our doubts, our lack­ing of con­vic­tions instead of hav­ing ones too strong and dan­ger­ous. [audi­ence applauds]

Leon Wieseltier: I have a ques­tion for you. I think that it’s clear, it’s obvi­ous, that beliefs and val­ues and con­vic­tions can be abused and can be per­vert­ed. And that evil can be com­mit­ted in the name of val­ues that pur­port to be good. I think this is cer­tain­ly his­tor­i­cal­ly true and etc.

But do you real­ly think that a life with­out belief is prefer­able to a life spent in clar­i­fy­ing the dif­fer­ence between true belief and false belief, or good belief and bad belief? In oth­er words I have fam­i­ly, too. I can’t imag­ine how I could raise my son on an absence of con­vic­tion. And my ques­tion to you is, it is true that some­times you are giv­en meals that are very ter­ri­ble and that can even poi­son you and kill you. But for that rea­son would you stop eat­ing entire­ly? Would you give up all food because some food can do you harm? I don’t… I’m not sure I under­stand what you’re argu­ing for.

Albinati: Maybe it has been a mir­a­cle with my fam­i­ly, but I nev­er had to teach to my chil­dren val­ues like respect the oth­ers or don’t kill the oth­ers. I had just to say to them go and wash your hands.

Rob Riemen: What is it that you learned about human nature, teach­ing those pupils of yours in prison?

Albinati: That’s a wide, wide ques­tion. Well, I learned what I knew before going there, that human nature is bad. And so you have to do your best to pre­vent, to lim­it the dam­age that a man can do to oth­er men or women. And that’s all our duty. Not much more than this. To put down the the pain and suf­fer­ing and… But because evil is is there, is among us, is us. If the [ban?] would be per­fect there would be not much use in mak­ing such great effort.

I had a very strange con­ver­sa­tion when I was work­ing fif­teen years ago in Afghanistan as a vol­un­teer of the United Nations togeth­er with oth­er peo­ple doing my same job. And I was the only one to think that man was bad. [Riemen laughs] And we were sur­round­ed by destruc­tion. So what are we doing here, if man is not bad. We have proof [crosstalk] of this simple—

Labaki: I don’t agree. I don’t agree with you. I mean it’s too fatal­is­tic to say man is evil. I mean, there’s a— Of course there’s evil, but there’s a rea­son why this evil exist­ed and I think it’s all in the child­hood, it’s all in… I think the source of evil in the world is unloved child­hood, is neglect­ed child­hood. We can­not just deal with it as if it was a fact of life. We should go to the heart of the prob­lem and start work­ing on it. I think it would be too fatal­is­tic and cyn­i­cal to just say evil is there. We are wired for empa­thy. We are wired for love. We are wired for feel­ing the oth­ers. I don’t agree at all with your vision of humans.