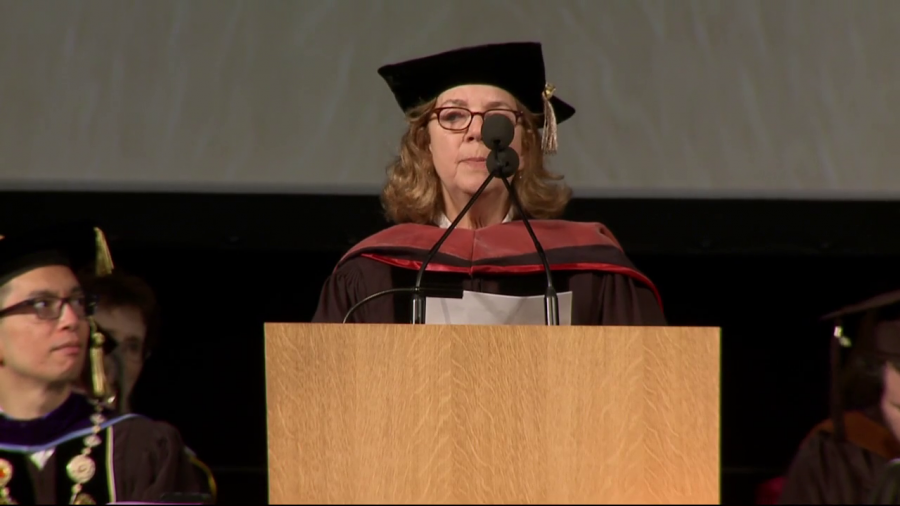 It is with some sur­prise and much heart­felt grat­i­tude that I stand before you today. This is an hon­or I nev­er expect­ed to receive, and my chil­dren are here to make sure they’re actu­al­ly see­ing this so they can believe it. I am delight­ed to be here, and I thank you. Extra cred­it has in fact turned out to be a good thing. And to quote Thomas Jefferson (I think that’s the only quote of the day), ​“Failure has turned into suc­cess. The fail­ure of one thing is repaired by the suc­cess of anoth­er.” And I am reluc­tant to tell any­one any­thing, because how can any­one know how the future will reveal itself? Having said that, I will pro­ceed to tell you things that I know, and things that I don’t know.

We live between despair and hope. No one knows why we are here, and noth­ing makes sense. Don’t for­get that. You could ask your­self, ​“What is the point?” until you go crazy, lit­er­al­ly. So, the start­ing point is to not know. And then to pro­ceed. And what do we pro­ceed with? There can only be two things, work and love. And I am not sure any­one knows what love is or how it changes or how you change, so we will put that aside for a minute (it’s a lit­tle com­pli­cat­ed) and think about work.

It is not always easy to work. It takes great courage. And often you have to force your­self, or find some­one else to force you to cre­ate. And if the per­son forc­ing you is also the per­son who loves you, you are very lucky. I was lucky in many ways. I met a mad Hungarian named Tibor. We were eigh­teen at NYU in sum­mer flunk out class. And the col­lec­tion of lazy nitwits in that class was impres­sive. I wore unfor­tu­nate bell-bottoms and spent a lot of time day­dream­ing. He wore unfor­tu­nate bell-bottoms and was try­ing to over­throw the gov­ern­ment. We start­ed to date. I was knit­ting him a red sweater; he was read­ing Mao’s Red Book. There was the Vietnam War. Feminism, thank god, arrived one Thursday night. We both dropped out and read Baba Ram Dass, who wise­ly told us to be here now, that we did­n’t know where we were.

I went to Paris to sit in cafes and write ter­ri­ble poet­ry. He went to Cuba to cut sug­ar cane and help Castro. Someone need­ed to help Castro, and it seemed that this guy from Poughkeepsie was the one to do it. More time passed. We went back to school. We dropped out again. I went to the Caribbean with a guy who I thought was a poet, but lat­er turned out to be an accoun­tant. Not nec­es­sar­i­ly a bad thing, but still. Not what I thought. Tibor joined a com­mune in New Jersey to orga­nize work­ers who may or may not have want­ed to be orga­nized. We were young and stu­pid and no one told us what to do or what not to do. Our part­ings were cat­a­clysmic. I despaired. Could a bad poet from the Bronx and a near­sight­ed rev­o­lu­tion­ary from Poughkeepsie ever find hap­pi­ness? In bell bot­toms, no less.

Somehow the fates inter­vened, and we were reunit­ed. We were in love, very sim­ple. And we mar­ried and had two chil­dren who we adored. And then this oth­er thing hap­pened. We both start­ed to work and find our way. He in a book­store design­ing the win­dows and then the ads, I begin­ning to draw and decid­ing that being a car­toon­ist or humorist was a good way to live. And we start­ed to work togeth­er, and begin a con­ver­sa­tion that nev­er end­ed and knew no lim­its. And we did­n’t think we had to choose one thing, we thought we could choose every­thing. And we also began to under­stand that to care pas­sion­ate­ly about your work will keep you, dare I say it, happy.

How does this hap­pen? Perseverance, and patience, and a will­ing­ness to believe in your instincts. We used to say at work, ​“Imagination is more impor­tant than knowl­edge,” a quote by Einstein, cov­er­ing all of our lack of knowl­edge. But it’s still a very smart thing to know. To be adamant about hav­ing a sense of humor. To use a pen­cil. To be curi­ous, and won­der, and not know. To remem­ber your child­hood, your par­ents, grand­par­ents, aunts, uncles, cousins. To remem­ber the meals togeth­er, the rooms that you sat in, the songs that were sung, the argu­ments you had, the truths you told, the lies you told, the lies you tell. The com­pas­sion that arrives, the sar­casm that fol­lows. Those mem­o­ries will nour­ish your work.

My par­ents left Russia after one too many pogroms. We left Israel when I was very young, and came to the United States. Goodbye to the blue ocean and sun and sand and the fam­i­ly, hel­lo to the dizzy­ing tumult and mas­sive city of New York with ham­burg­ers fry­ing and peo­ple rac­ing about. The land of can-do. The promised land called The Bronx. We found our bear­ings in var­i­ous ways, but my par­ents nev­er lost their oth­er­ness. My moth­er, who I speak of often, was a woman of great irrev­er­ence and great beauty. 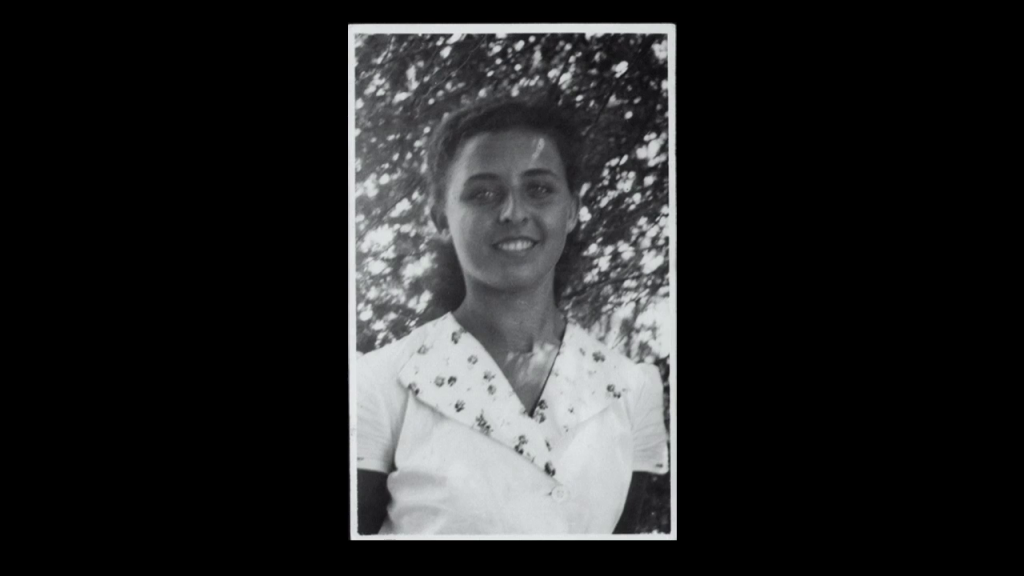 My moth­er Sarah is some­body that I always show in my talks because she is inspi­ra­tional, and I will show you why. I grew up in a house­hold that val­ued cul­ture, but you were not real­ly expect­ed to know any­thing. That’s beau­ti­ful sit­u­a­tion. There were no expec­ta­tions or ques­tions. We were left in peace.

Some years ago I asked a num­ber of peo­ple to draw a map of the United States from mem­o­ry, quick­ly. People tried hard to get it right. This is my moth­er’s map, by far the best of any that were made. 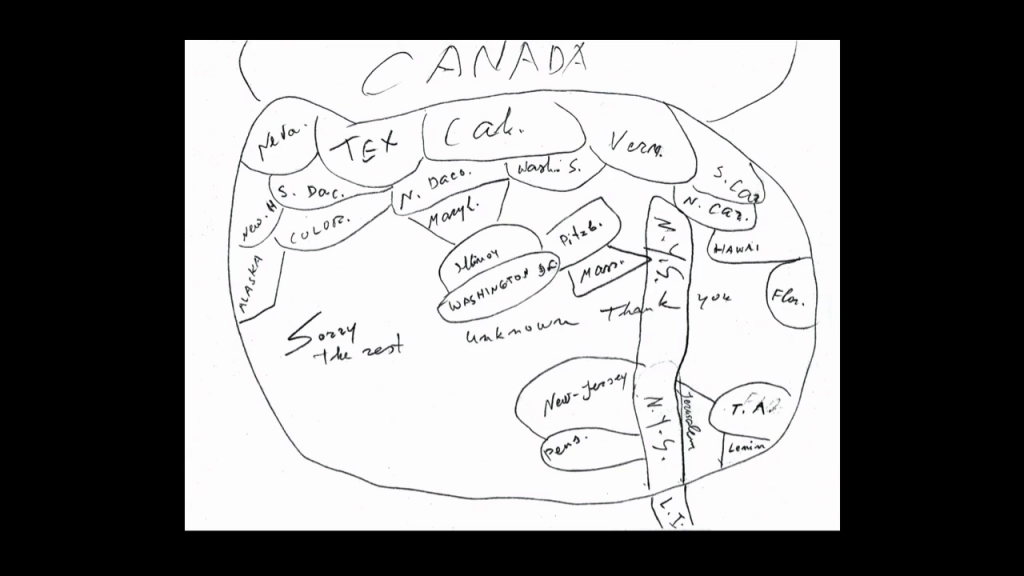 I hope you can see what’s going on there. And I’m sure Providence, Rhode Island is not in the map. But as you can see, Texas and California are nes­tled under­neath Canada. The Southern states are North of the Northern states. Hawaii is… uh, where is Hawaii? Hawaii’s where we are…somewhere. Illinois…“Illinoy,” Washington. And there’s also a ref­er­ence to the lit­tle vil­lage that she came from in Russia called Lenin. Tel Aviv, Jerusalem, are all in there. And going through the cen­ter of the map of this egg-shaped United States, was a phrase say­ing ​“Sorry the rest unknown Thank you,” which in her lan­guage was, ​“Sorry, the rest unknown. I could­n’t care less what you think.”

So con­grat­u­la­tions on doing things. Congratulations on mak­ing mis­takes. Congratulations on pay­ing back any mon­ey you have bor­rowed from friends in the last four years. And I think you should do it today. Go forth with kind­ness, mean­ness, courage, fear, com­pas­sion. Go forth with know­ing and hav­ing no idea, and know­ing that hav­ing no idea is com­plete­ly accept­able and real. Commence with con­fu­sion. Commenced with a sense of humor. Walk. Breathe. Retreat. Commence with an idea. Sketch it with a pen­cil. Crumple the paper. Start again. Retreat. Despair. Commence, this time for real.

I could end with, ​“Sorry the rest unknown Thank you.” And I will, but often this unknown can bring pro­found joy and pro­duce great work, and it’ll be amaz­ing to see what you do. Thank you very much.

“Sorry, the Rest Unknown” by Maira for The New York Times