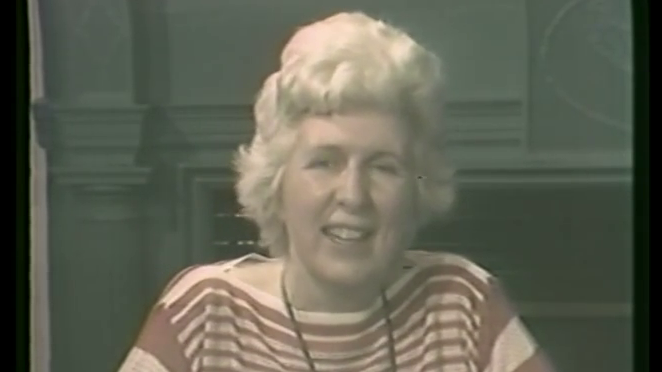 Kay Mauchly on Finding Out about ENIAC, Programming It, and Marrying John Mauchly

Kathleen Mauchly: We knew that there was a big project going on at the Moore School. The whole back sec­tion of the first floor was devot­ed to this con­struc­tion project that was going on there. Not only that, but when Fran and I first came to Moore School, with the excep­tion of the girls—I think there were about four of them who had been sent up from Aberdeen—and Dean Pender’s sec­re­tary, there were no women in the Moore School at all. But grad­u­al­ly, as the project of the ENIAC con­struc­tion went on, the Moore School hired more and more women. So it was very obvi­ous that there were very very many more women, and they were work­ing at the wiring jobs that were going on. And I don’t know where they had recruit­ed the girls from, but they weren’t all col­lege grad­u­ates or any­thing like that. But it did fill up Moore School, pret­ty much, and they would tell us that they were work­ing on this project. We nev­er did get into see it in the actu­al con­struc­tion phas­es, that I know of.

Fran Bilas and I worked on oppo­site shifts all dur­ing the war. And toward the spring of 1945, it became pret­ty obvi­ous that the war was end­ing and I can’t remem­ber exact­ly whether it was Lieutenant Goldstine or John Holberton who came to me one day while I was work­ing on my shift and asked if I would be at all inter­est­ed in work­ing on a new com­put­er that was being con­struct­ed upstairs.

So with noth­ing else loom­ing big in my future at that time, I said I thought that’d be inter­est­ing to learn how to do that. So evi­dent­ly they had approached about six girls who were work­ing in the unit at the time and asked them if they’d be inter­est­ed in learn­ing this. So there were six of us cho­sen from those who decid­ed they would like to, and we were sent around the first week in June, I sup­pose, to Aberdeen for a three-month study of how to oper­ate all the dif­fer­ent com­put­ing machines that were down there. That is, the IBM-type card-handling machines, because we weren’t at all famil­iar with that type of operation.

So we went down there and we learned how to wire up tab­u­la­tor boards and how to wire up their auto­mat­ic relay mul­ti­pli­ers which they had down there. And the six of us spent the sum­mer in Aberdeen lean­ing how to oper­ate all the IBM machines. The rea­son for this was that the input and the out­put of the ENIAC was going to be by way of IBM machines. So if we were going to oper­ate the machine, the peo­ple in charge fig­ured that we would have to know how to work IBM cards.

Well, when we came back that Fall, this is now in the Fall of 1945, the ENIAC was already pret­ty much con­struct­ed. As a mat­ter of fact, all the pan­els were up. Some of the parts were not quite fin­ished. I think the divider/square root­er was not in oper­a­tion, but oth­er­wise every­thing else was.

Then we were told we had to learn how to oper­ate this machine. Well, how do you go about that? And some­body from Moore School, I just don’t remem­ber just who the per­son was, gave us a whole stack of blue­prints, and these were the wiring dia­grams for all the pan­els. And they said, ​“Here, you can fig­ure out how the machine works and then fig­ure out how to pro­gram it.” Well, this was a lit­tle bit hard to do, know­ing noth­ing about any­thing. So Dr. [Arthur] Burks at that time was one of the peo­ple assigned to explain to us how var­i­ous parts of the com­put­er worked, how an accu­mu­la­tor worked. Well, once you knew how an accu­mu­la­tor worked, you could pret­ty well be able to trace the oth­er cir­cuits for your­self and fig­ure this thing out.

So we then pro­ceed­ed to pro­gram a tra­jec­to­ry to go onto this machine. And we had bare­ly begun to think that we had enough knowl­edge of the machine to pro­gram a tra­jec­to­ry when we were told that two peo­ple were com­ing from Los Alamos to put a prob­lem on the machine and Fran and I were asked to help these two peo­ple from Los Alamos to put their prob­lem on the machine.

Well, as I under­stood… I did­n’t under­stand it too well at that time, but now I know from things I’ve learned lat­er, that was Nick Metropolis and Stan Frankel, both from Los Alamos lab­o­ra­to­ry, had already been to the Moore School in July at the invi­ta­tion of Captain Goldstine and they had worked with Captain and Mrs. Goldstine and had got­ten the gen­er­al idea of how the ENIAC was going to work. And they had pro­grammed their prob­lem, which was sup­posed to be a Top Secret prob­lem, and then they had left, gone back to Los Alamos. When they appeared again about October, I think it was, they had the prob­lem pret­ty much pro­grammed onto sheets of paper and we were to help them set up the machine for this. And that was our first real time on the com­put­er itself. We went down­stairs into that room and that was when all the fun began, because no one knew how many bad joints there were and how many bad tubes there were and so on, til we actu­al­ly start­ed test­ing the machine.

Well, John [Mauchly] and Pres [Eckert] at that time were like moth­er hens. Oh, they were moth­er hens, of course they were. They stayed with that com­put­er night and day. Whatever went wrong, they were in there—there were a cou­ple engi­neers assigned to do the work, but they just were com­plete­ly involved in every aspect of that oper­a­tion of the com­put­er. Not in the prob­lem itself. I’m not even sure that they were told what the prob­lem was, because it was sup­pos­ed­ly a Top Secret prob­lem. But they cer­tain­ly knew and want­ed to know what each lit­tle sin­gle part of that com­put­er was going to do.

So Fran and I worked…sometimes I would come in the morn­ing at a quar­ter of eight and work until five or six or sev­en. And Fran would come in for the evening shift, and she would some­times work up til three AM. And then on alter­nate weeks, the reverse would hap­pen. So we got to know every­body attached to the Moore School, to the ENIAC project very very well.

Nick and Stan’s prob­lem went on in November and December, I think. Then dur­ing January, we heard that there was going to be a pub­lic demon­stra­tion of the ENIAC, and Captain and Mrs. Goldstine were in charge of this pub­lic demon­stra­tion. So they picked Betty Bartik (and maybe Betty Holberton, but I’m not quite sure about that.) to work with them in work­ing up some demon­stra­tion prob­lems. And that demon­stra­tion took place in February and was high­ly suc­cess­ful. It was very good.

Well, short­ly after that, I think Nick Metropolis came back to work again on his prob­lem, and this time with him came Tony Turkevich from the University of Chicago. They worked for a few weeks, and they had no soon­er left when Dr. Hartree came from England and I was assigned to work with Dr. Hartree.

So Dr. Hartree had also been here once before and had had the oper­a­tion of the machine explained to him, and he had also evi­dent­ly had some blue­prints or some descrip­tion of the machine before he arrived to put his prob­lem on. So I went over, worked with him, and ironed the bugs out of the set­up that he had worked out, and togeth­er we set up the machine and start­ed to work Dr. Hartree’s prob­lem. And that went on most of the month of July of 1946, we’re talk­ing about now.

Well, when I first mar­ried John, and that was, he said, a great emer­gency. His moth­er was sick, his wife had pre­vi­ous­ly died two years before that, and his moth­er was not well. His chil­dren did­n’t have any­body much look­ing after them. And the house­keep­er that he had hired to look after the chil­dren was about to have a baby and she was going to leave, and oh, he had so many com­pelling rea­sons why we should get mar­ried. So, any­way, we did.

John Mauchly: You had none, of course.

Kathleen: Well…I don’t know. I felt that there were so many women then that were look­ing for a hus­band just to have some­body look after them. And I felt that here was a man I real­ly loved, I may as well mar­ry him. That was a good reason.

It’s on the tape, but I just want­ed it on a side, was that my par­ents did not like the idea of my mar­ry­ing John, at all.

John: I was too old for her.

Kathleen: There were many com­pli­ca­tions [crosstalk]

John: Besides, I did­n’t have the right religion.

Kathleen: …and the reli­gion, yeah, was a dif­fer­ence and so on.

Kathleen: Everything was wrong, so they were not about to either give me a wed­ding or even come to the wed­ding. So my sis­ter was my brides­maid and Pres Eckert was our best man at our wedding.