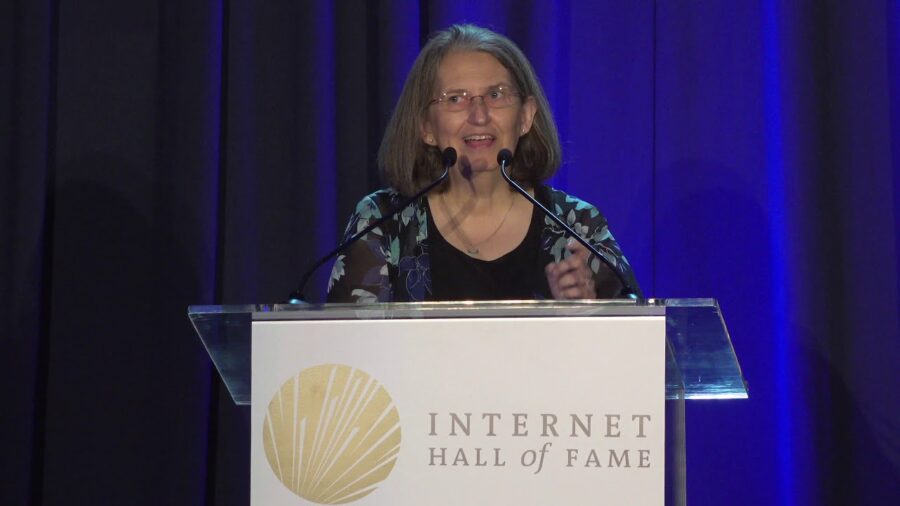 Jean Armour Polly: Hello every­one. Well I am—like every­one else I’m thrilled to accept this award and to be part of this stel­lar class here today. But like all of you I’ve done a lot of inter­est­ing things in my life and my career, from this librar­i­an thing—I’m going to focus on that—but I’ve also writ­ten a lot of books for kids on the Internet. And I worked as an Internet evan­ge­list for a mid-level region­al as well.

So, I’d like to focus on thank­ing the Internet Society for rec­og­niz­ing the impor­tant part that pub­lic librar­i­ans have played in help­ing to grow the reach of the Internet and its use by every­body. In 1981 I was a pro­fes­sion­al librar­i­an at a small library in upstate New York. Home com­put­ers were not wide­spread. But schoolkids were get­ting them, and I was won­der­ing how adults, their par­ents, or every­one else in the com­mu­ni­ty was sup­posed to get these skills.

So, while librar­i­ans are not real­ly known for our risk-taking skills, I do believe that you need to take a risk and you always learn some­thing. Sometimes it’s a good thing, some­times it’s a bad, thing but I want­ed to go with this thing.

So, we bought an Apple II+ com­put­er and we put it out for the pub­lic to use. And we bought some soft­ware. We had Oregon Trail, of course, that was ubiq­ui­tous back then. And VisiCalc—remember that? And a word proces­sor, some oth­er things. We start­ed let­ting the pub­lic use it.

Well, with­in six months it was so pop­u­lar we had to buy a sec­ond com­put­er, and we got a print­er. That was a big deal. In 1983, as home com­put­ing start­ed to become more main­stream, and as hob­by­ists began buy­ing modems, they did­n’t real­ly have a lot of places to call back then. They just had a few bul­letin board sys­tems, elec­tron­ic BBS sys­tems, that peo­ple ran out of their homes and you would call that modem and get online.

Well I decid­ed it would be fun to have the library run an elec­tron­ic bul­letin board sys­tem. So we oper­at­ed it off a modem pool of one. And we only had one phone line at the library, so we plugged in the modem when we all went home for the evening—we called it the night shift. And we got about a thou­sand calls a month; it was huge. And we set it up like the Dewey Decimal System because we were librar­i­ans. So if you want­ed to dis­cuss reli­gion you were in the ​“200” bul­letin board dis­cus­sion group, you know.

By 1992 we were offer­ing pub­lic access Internet via a SLIP con­nec­tion, but we had moved up to 14.4. We thought that was great. And that lat­er esca­lat­ed into get­ting a 56k and a Class B net­work, because in those days it was thought that libraries would become freenets and com­mu­ni­ty resources for connectivity.

Well, we always hear about the last mile con­nec­tiv­i­ty prob­lem. But I was more con­cerned myself with the last arm’s length, which is between your fin­gers and the brain. And that’s where my niche was as a librar­i­an, how best to help peo­ple take their first baby steps on the Internet. And that’s where I got the nick­name Net-mom, which by the way is a reg­is­tered trade­mark. International Class 42. For you lawyers out there, Larry.

So, it’s painful­ly true than in those ear­ly days, though, a lot of my col­league librar­i­ans were not so thrilled about this Internet thing because hereto­fore they had been the guardians of knowl­edge and wis­dom on the Internet and you know, here was this Internet thing that was unvet­ted and with­out any author­i­ty to tell you some­thing. And they real­ly con­sid­ered it a competitor.

So, again I was a road war­rior like many of you and took my five-pound lap­top and my modem and my evan­ge­lism and went to twen­ty dif­fer­ent states and talked about the Internet to librar­i­ans. And I helped them learn how to use it and learn how to not be afraid of it. We did rec­og­nize the poten­tial on the hori­zon, and not only that peo­ple could access the wealth of the Internet but also could con­tribute to it, which is just as impor­tant. And these days I’m hap­py to say that public-access Internet is con­sid­ered a core library ser­vice. Library users need it to apply for jobs, access health infor­ma­tion, send and receive email, and of course play games because pub­lic libraries are for recre­ation too. But not only that it’s tru­ly a social equi­ty issue. Because so much infor­ma­tion that helps peo­ple self-educate and self-empower is only avail­able online now.

But, at this time I would like to con­fess that my under­grad­u­ate major was medieval stud­ies. Do not ask me to set up a zone file. But do allow me to give kudos to the sys­tem admin­is­tra­tors in libraries and the net­work wiz­ards who keep the pack­ets flow­ing in the pub­lic library sys­tems. They’re large­ly unsung and if you give me a minute I’m going to sing them.

Their labors are crit­i­cal and I want to acknowl­edge the work of my col­leagues Rick Fenster and Stephanie Zwolinsky. And also to the web site design­ers and con­tent cre­ators, so thank you to Diane Tolson. And I want to men­tion two oth­er vision­ary librar­i­ans who encour­aged me. That would be Monica Ertel and Steve Sisler from the Apple Corporate Library in Cupertino. They seed­ed equip­ment and oth­er help to libraries like my own who were will­ing to take risks.

I would also like to thank my nom­i­na­tor Susan Estrada, a Hall of Fame inductee in her own right, and my writ­ers of endorse­ment let­ters, Beverly Choltco-Devlin of the Tacoma Washington Public Library; Karen G. Schneider, Dean of the uni­ver­si­ty library from Sonoma State University; and Stephen Carrick-Davies, CEO of the Mondo Foundation in London. He does a lot of inter­est­ing Internet edu­ca­tion activ­i­ties abroad.

And also thank you to my fam­i­ly and my poor hus­band Larry. He’s a web site design­er and devel­op­er and a life­long learn­er. And our son of Net-mom Stephen, who’s here with his love­ly bride Lauren over there.

And in con­clu­sion it’s won­der­ful to be the first librar­i­an to receive this hon­or, how­ev­er as Justice Sandra Day O’Connor, the first female US Supreme Court Justice once said, ​“I’ve always thought that while it’s won­der­ful to be the first, you don’t want to be the last.” So to all you librar­i­ans out there, the biggest ene­my is complacency—you must reject it. And so con­tin­ue to inno­vate and take risks, and some­day you might be stand­ing right here. Thank you very much for this honor.