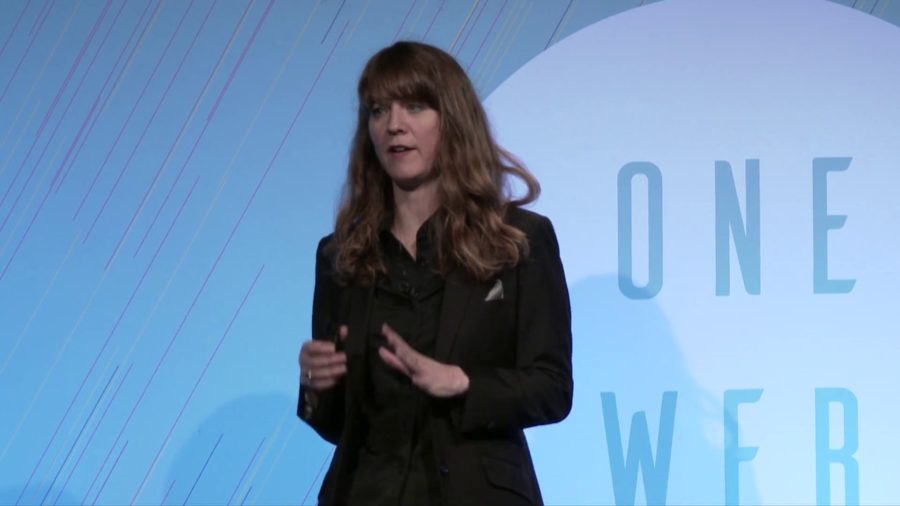 Indie Music and the Web

Hello. This is the first talk I’ve ever giv­en with slides, so we’ll see how that goes. I was asked today to speak about web lit­er­a­cy. As one of the exec­u­tive direc­tors of CASH Music, a non­prof­it who’s focused on empow­er­ing musi­cians on the web with open source tools and edu­ca­tion, this is some­thing that I work on and think about a lot.

I think often­times when we think about web lit­er­a­cy we think about things like skills—learning skills, build­ing on the web, under­stand­ing how the Internet works. All of which is very impor­tant but does­n’t speak to why the web works like it does. I think it’s deeply impor­tant that we add a work­ing knowl­edge of busi­ness and busi­ness mod­els to what it means to be web-literate. The sites that we use, there’s big mon­ey behind them, and there’s even big­ger prof­it motives in front of them. We need to be able to think crit­i­cal­ly about where we build our com­mu­ni­ties, about what they’re doing with our data, and about when—not if—they mon­e­tize us. 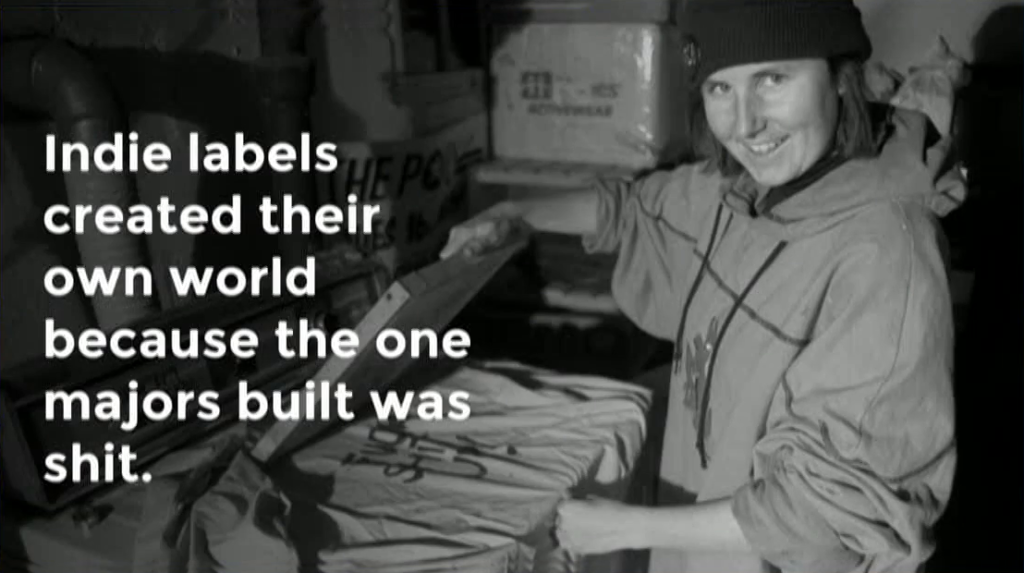 So, I apol­o­gize for the swear­ing. I’ll try not to do it very much. It nat­u­ral­ly just hap­pens. But I came into the music indus­try as a musi­cian about twenty-five years ago. I start­ed tat an inde­pen­dent record label based in Olympia, Washington in the 90s. That’s impor­tant because we were doing some­thing that we believed was very polit­i­cal. We were try­ing to build busi­ness mod­els out­side of the cor­po­rate struc­ture, out­side of the major label world. We believed it was impor­tant to put artists first, to make artists our part­ners in order to ensure that oth­er voic­es were heard, oth­er than just what the cor­po­rate struc­ture want­ed to hear. So I came into this indus­try think­ing about busi­ness mod­els polit­i­cal­ly and I’ve nev­er stopped. 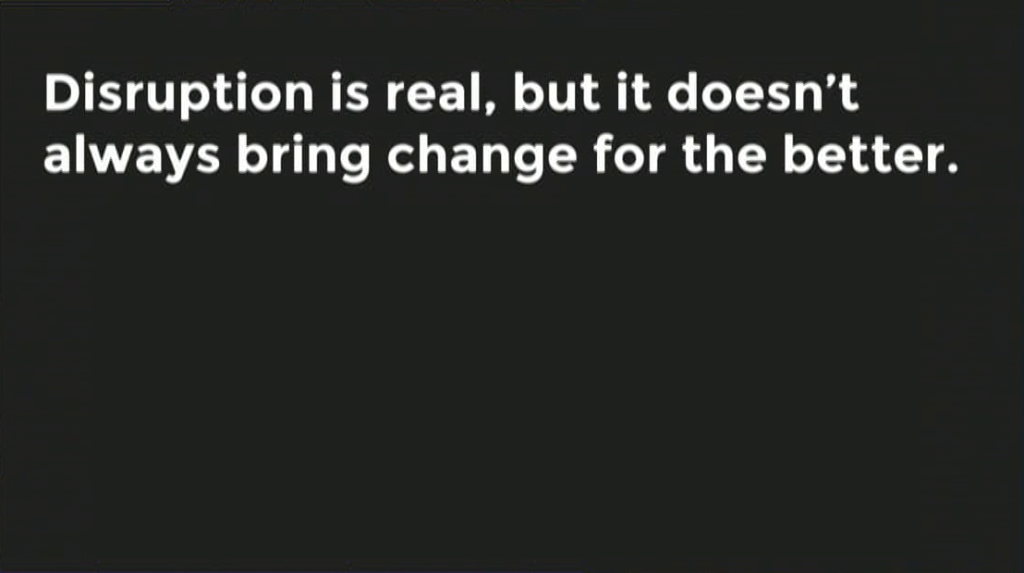 It also means that I had a front-row seat to the dawn of the dig­i­tal era, and saw all the destruc­tion that ensued. It affects artists’ lives, liveli­hoods, and it still does. I have seen lit­er­al­ly hun­dreds if not thou­sands of music tech star­tups come and go in that time peri­od. They have all told me they were the future of music. I have watched as freemi­um mod­els have become pre­mi­um ones. And I’ve seen artists build com­mu­ni­ties on closed plat­forms, only to watch those plat­forms implode, and then watched them go on to the next closed platform. 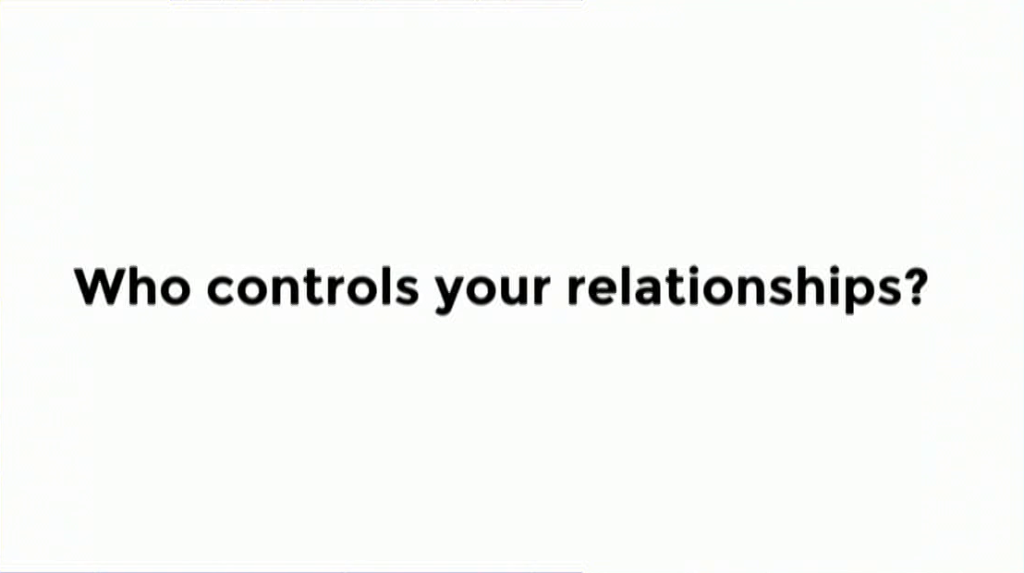 If any­one here uses a Facebook page at all for any sort of promotion—events pro­mo­tion, project promotion—you know that you don’t have access to your audi­ence. They con­trol that rela­tion­ship, not you. 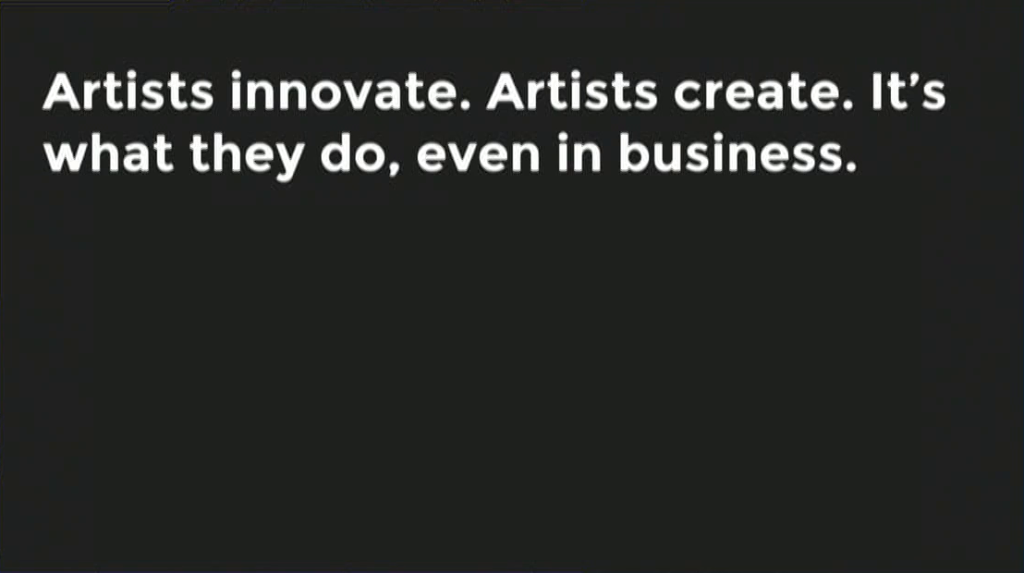 I’ve also seen artists embrace the open web and try new busi­ness mod­els. They are inno­va­tors at the core of what they do, and when they’re not scared of the Internet, kind of bril­liant things can happen.

So, one of the founders of CASH Music is an artist named Kristin Hersh. She was in a band in the 90s called Throwing Muses and she built up a very strong core audi­ence of sup­port­ers. She want­ed to fig­ure out a way to then let them sup­port her direct­ly. So nine years ago she built the very first sub­scrip­tion ser­vice. It was the first tool that CASH built, it’s how she makes her liv­ing to this day. She is able to release records, to own her own copy­right, to go on tour, all under her own con­trol. Which is mas­sive­ly inspiring.

She was also the first artist to sell MP3s direct­ly. We’ve also worked with folks like Run the Jewels, who have giv­en away their first two records for free to their fans. They’ve become one of the most influ­en­tial rap groups in the world for a vari­ety of rea­sons, but I think it’s real­ly impor­tant to look at how they dis­trib­uted their music to their fans. It shows a lev­el of respect kind of like none oth­er. You know, you trust that your fans are there for you. And they are. All they do is ask for an email address in exchange for a down­load of a free record. They do not exploit that email list. They only use it when they’re going on tour or they have a new album or they have new mer­chan­dise. And their fans are very hap­py to sup­port them. 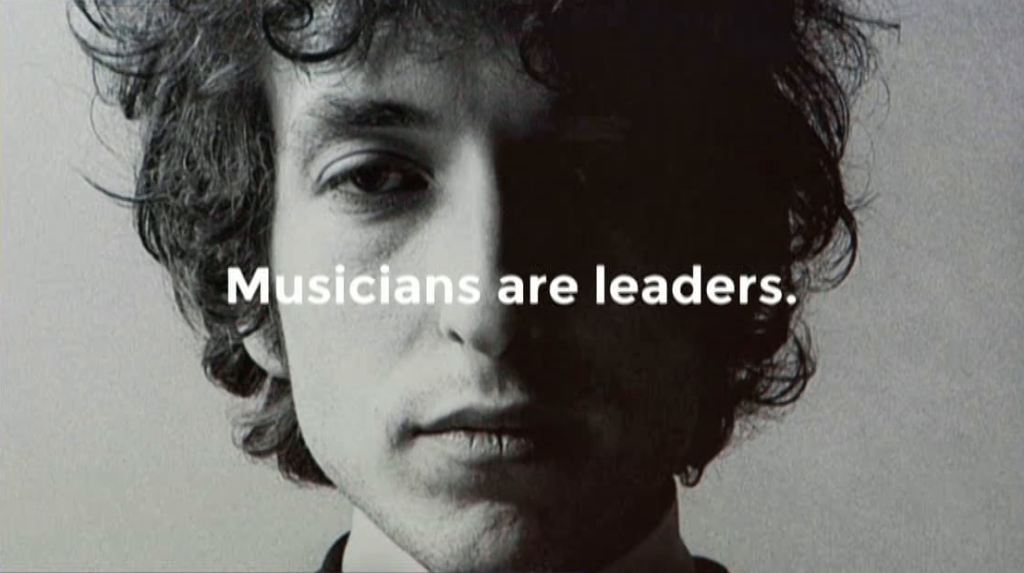 Musicians are lead­ers. If you think of any cul­tur­al move­ment through­out his­to­ry, they’re sort of at the fore­front. Think about the Civil Rights Movement. Think about the anti-war move­ment. Third-wave fem­i­nism. Second-wave fem­i­nism, frankly. There are always a song and a musi­cian, and music is at the core of it. Think of Bob Dylan’s ​“Masters of War” or Sam Cooke’s ​“A Change is Gonna Come” or Public Enemy’s ​“Fight the Power.”

Musicians are also lead­ers online. They dri­ve a lot of traf­fic. If you look at the top-followed accounts on Instagram and Twitter, 75% of them are musi­cians. Musicians and music got us to tor­rent. Torrents are ter­ri­ble. It’s a ter­ri­ble UX. And peo­ple want­ed music so bad­ly they learned how to do this. 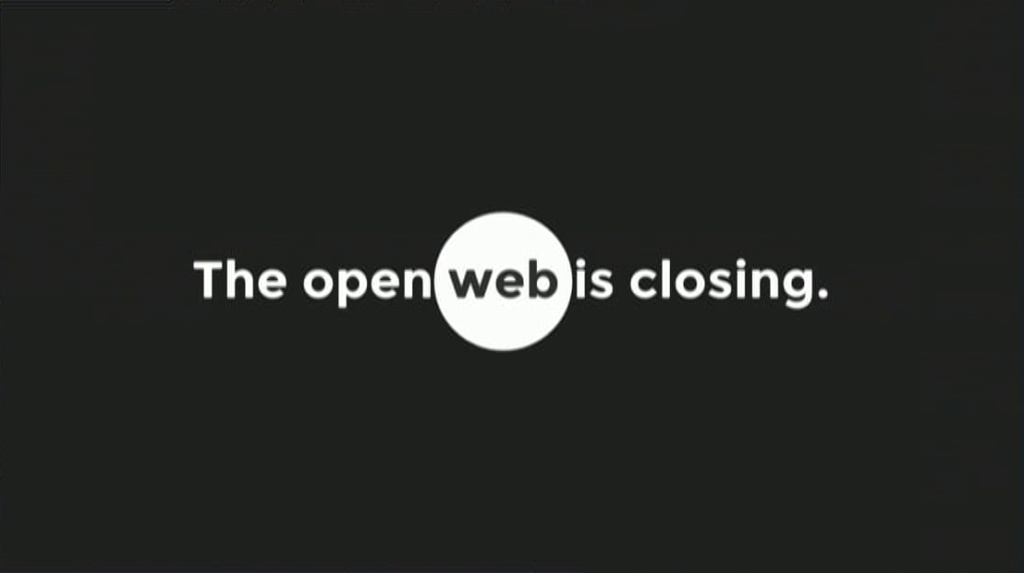 So the Internet, this place of immense pos­si­bil­i­ty and free­dom is clos­ing. We are see­ing users go for the easiest-to-use ser­vices with­out a sec­ond thought to their pri­va­cy, their data, or the long-term effects of where they’re build­ing their com­mu­ni­ties online—or their busi­ness­es online. 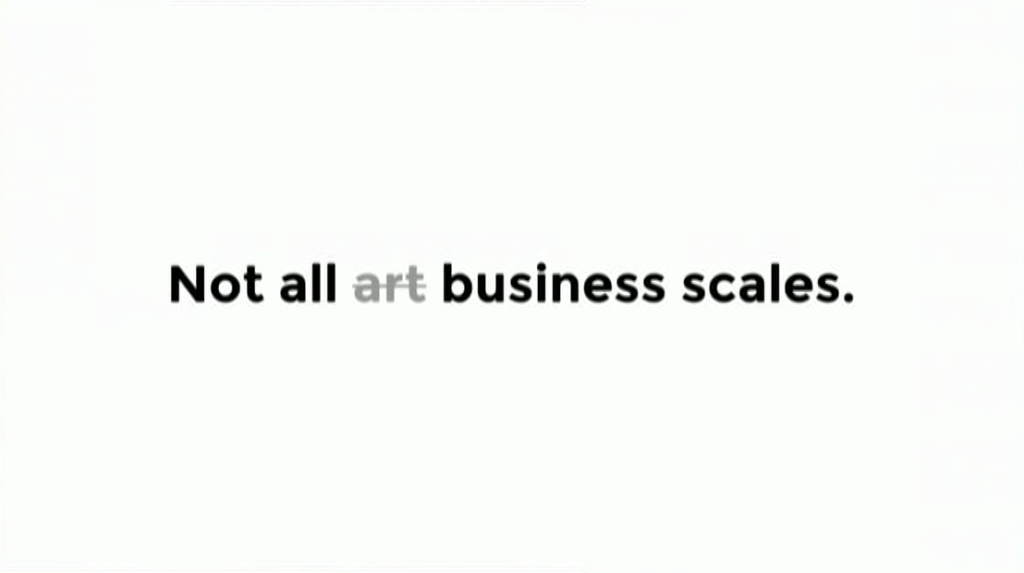 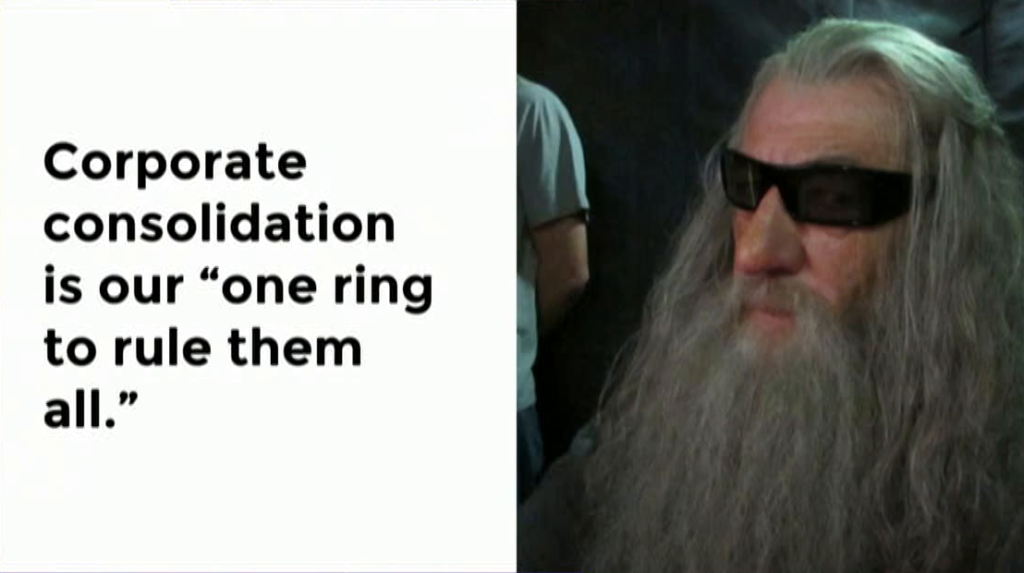 Sorry, I did­n’t make the slides so they’re crack­ing me up. So we see these com­pa­nies, these star­tups, they began in this giant hole. There’s this deficit that they have to make up. And…so often, they don’t. We see over and over again—either by acqui­si­tion or implosion—the largest cor­po­ra­tions in the world tak­ing con­trol of these new ideas. I’ve been work­ing on this chart, actu­al­ly— And I wish it was done right now. But it’s a very easy way to see maybe the top twen­ty music tech com­pa­nies, and then where they’ve been siloed into. You know, Topspin went to Apple, it’s BandPage went to Spotify and then to YouTube. It’s just watch­ing every­thing go into these very small, con­sol­i­dat­ed silos. 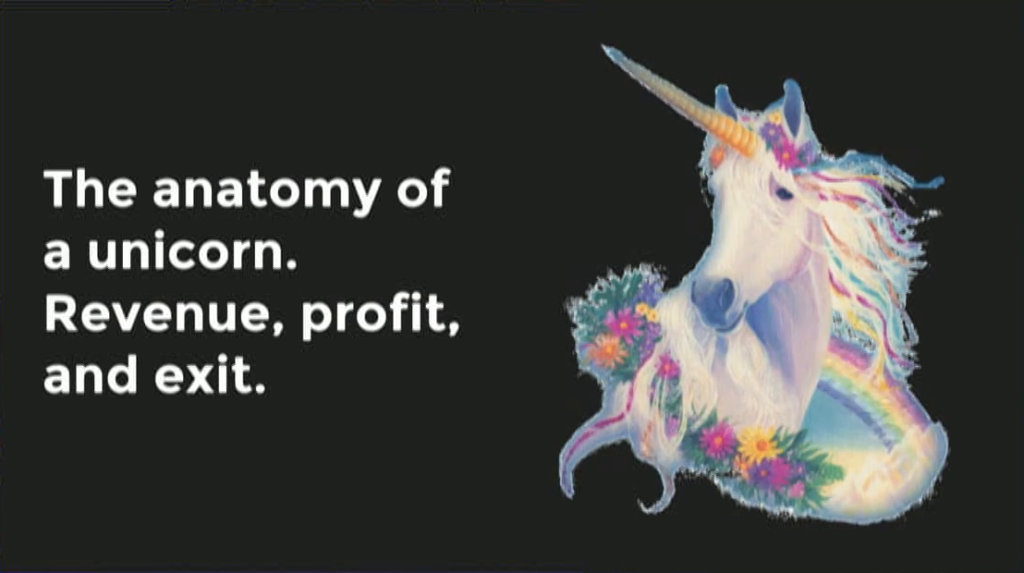 So we’re going to talk about Spotify, and I don’t want to talk about whether or not stream­ing is prof­itable for artists. That’s a total­ly dif­fer­ent con­ver­sa­tion. What we need to talk about is is Spotify prof­itable at all as a busi­ness? They have post­ed exact­ly one prof­itable quar­ter, in one ter­ri­to­ry, ever. It was 2014 in the UK. They recent­ly took on anoth­er bil­lion dol­lars in debt, mean­ing that there are now two bil­lions dol­lars in debt. And they are talk­ing about acquir­ing anoth­er in-debt music tech ser­vice, SoundCloud.

So let’s think about that for a sec­ond. We know that Spotify has to pay out 70% of all income to right­sh­old­ers. So that’s record labels, that’s dis­trib­u­tors, occa­sion­al­ly that’s artists directly—not very often with Spotify. But 70% just goes out.

We also know that in order to get a licens­ing deal in the United States they were asked to give equi­ty to the major labels. That is an undis­closed amount; we don’t know how much it is. But it’s some­thing the major labels take in and they do not have to share with their artists.

So we’re look­ing at Spotify hav­ing to pay back $2 bil­lion in debt on less than 30% of all of their income, as well as pay for all of their over­head. Doesn’t real­ly seem like­ly. We’ve seen Rdio lose in this space. There are rumors that TIDAL is going to be acquired by Apple. Next week that could be Google. You nev­er know. 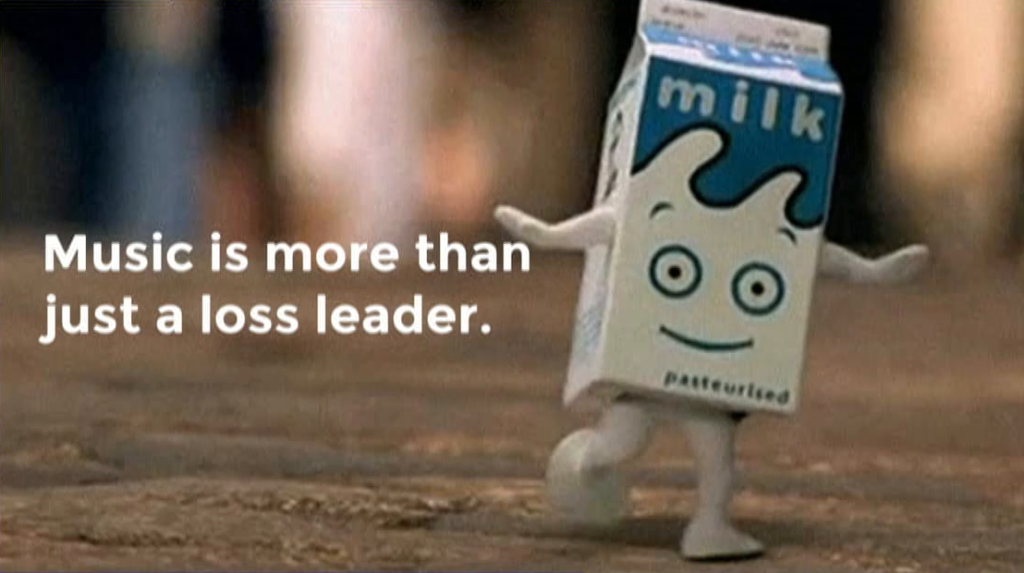 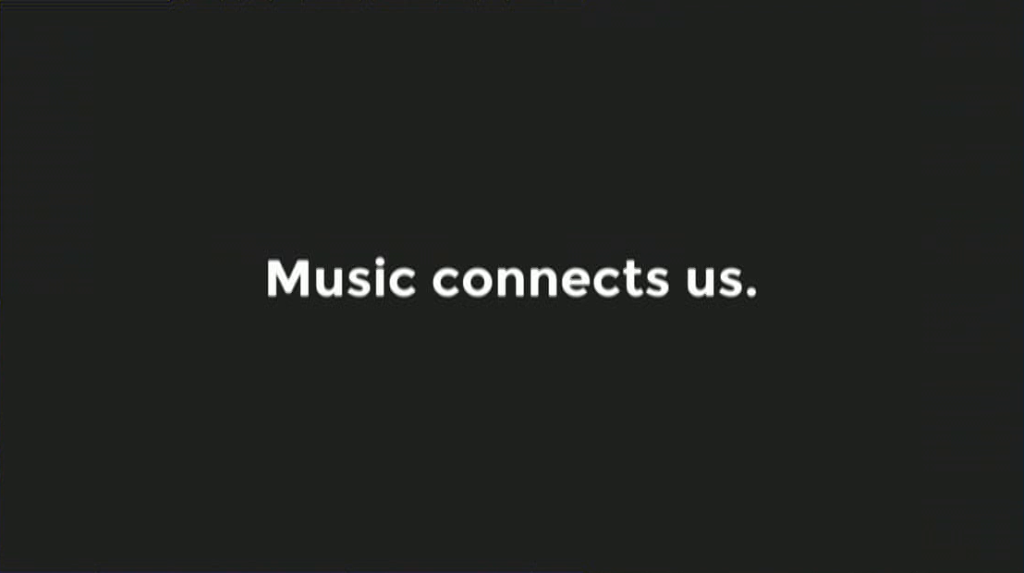 So, music con­nects us in ways that almost noth­ing else does. It’s the uni­ver­sal lan­guage. It con­nects peo­ple across phys­i­cal bar­ri­ers, soci­etal ones, men­tal ones. It is the way that we can tru­ly find empa­thy with one another. 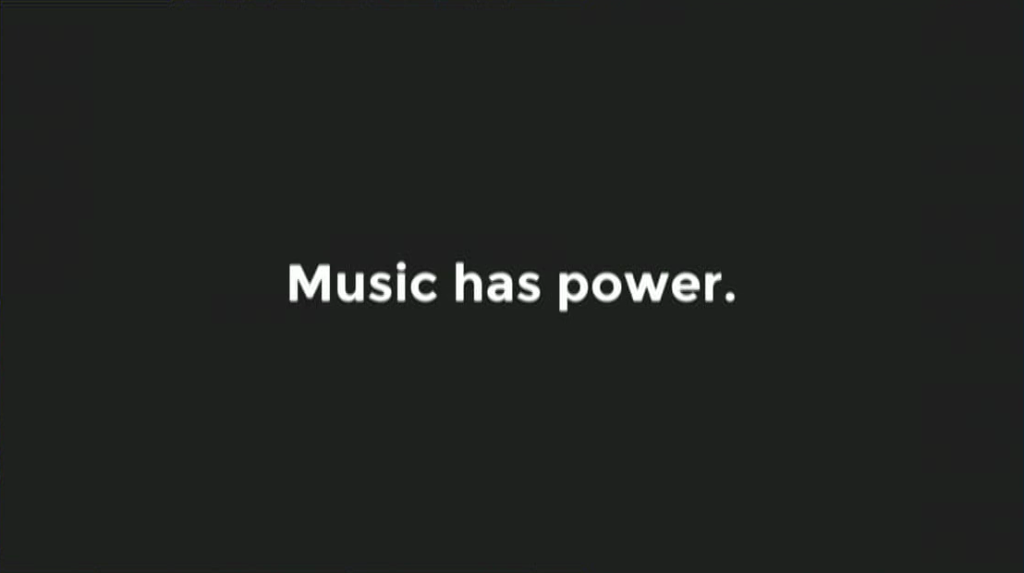 It also has pow­er. It gives voice to the voice­less. It gives hope to the hope­less. And if we do not have a vari­ety of voic­es out there being lis­tened to and being heard, then we’re all miss­ing out. 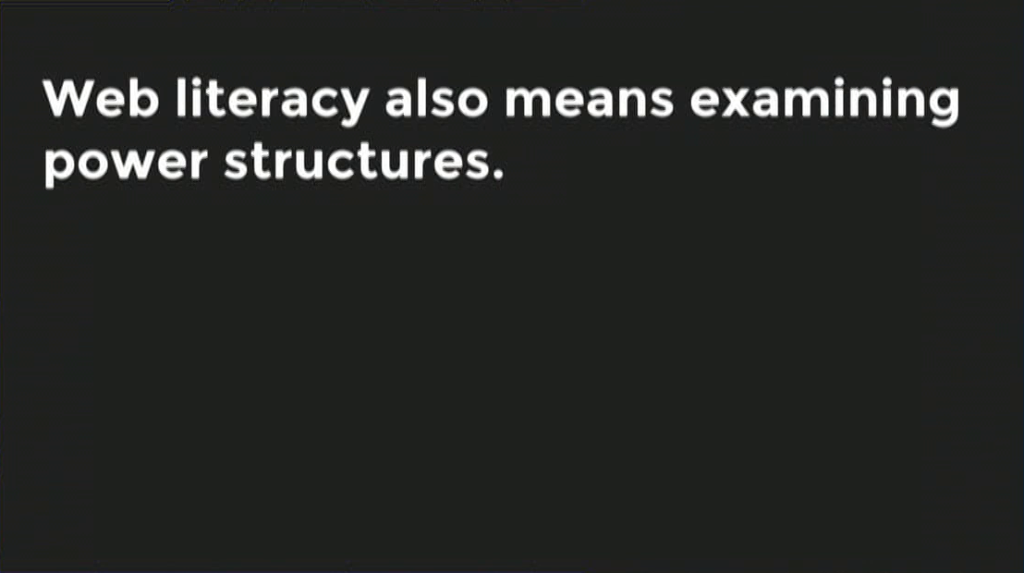 We talk about the open web like it’s a code prob­lem. It’s a cul­ture prob­lem. If we had artists embrac­ing the open web, under­stand­ing what it means, talk­ing to their fans about it, we could real­ly see big changes. We need cul­tur­al lead­ers to con­tin­ue to lead us on this path to the open web.

Sarah Marshall: Okay, who has a ques­tion for Maggie? I’m look­ing out at you.

Marshall: Nobody has a ques­tion for Maggie? Let me jump in, then, and ask you a ques­tion. So we were talk­ing just before about what this means for the music indus­try as a whole. What do you see hap­pen­ing in the next cou­ple of years, etc., from your van­tage point?

Vail: That is a very good ques­tion. I see peo­ple get­ting less and less scared of the web. Which is some­thing that needs to hap­pen. I also see artists get­ting more and more con­trol of their careers. There’s no rea­son why any­one should ever sign a con­tract in per­pe­tu­ity ever again. You have con­trol and pow­er. And while I’m not going to say that labels are a bad thing—I worked at one for sev­en­teen years; I can see that they have real pow­er. But under­stand­ing what that rela­tion­ship is, how those con­tracts look, and ulti­mate­ly keep­ing your copy­right and the rights to your own art are vital.

Marshall: Another opti­mistic thought. Oh, we do have a ques­tion in front.

Audience 1: Hello. You did­n’t talk so much about what CASH Music does. I know a lit­tle bit about your mod­el. Do you think it will be able to scale up to an extent that it can make a dif­fer­ence to this prob­lem you describe?

Vail: Yes, I do. So, I can give a brief overview of CASH. We’re a non­prof­it, we build open source dig­i­tal tools—so we’re every­thing from a shop­ping cart to sub­scrip­tion ser­vice to tour date man­age­ment. Kind of any­thing that an artist would need to con­nect direct­ly with their fans. We have a host­ed ver­sion and a dis­trib­uted ver­sion, but what we real­ly try to do is tell artists to make their web site the cen­tral focal point for their inter­ac­tions. Which sounds crazy but it’s true.

And then we pair that with edu­ca­tion. So we’ve been doing edu­ca­tion with­in the plat­form with those tools, but recent­ly just launched a pub­li­ca­tion called Watt that is ded­i­cat­ed to talk­ing about the eco­nom­ic and health and tech­nol­o­gy issues that face artists. So we’ve done a lot of how-tos just explain­ing copy­right and trade­mark, why you need to set up your your band as a business—that sort of thing. But we’ve also had a lot of first-person artist sto­ries about things that have worked for them or not worked for them. And we’re mov­ing into research and case stud­ies as well.

But yeah, I mean the thing about CASH is we don’t actu­al­ly need to scale. I know that sounds crazy but it’s… We’re three and a half peo­ple. We’ve been around for near­ly ten years. And we’ve built hun­dreds of projects direct­ly with artists to make sure that the tools work for them. That is one of the things, and one of the prob­lems I see with tech­nol­o­gy, is that so often com­pa­nies start up and think they have some kind of answer to a prob­lem that does­n’t exist. And we do this flip­side of that. We’re build­ing solu­tions to prob­lems that are there.