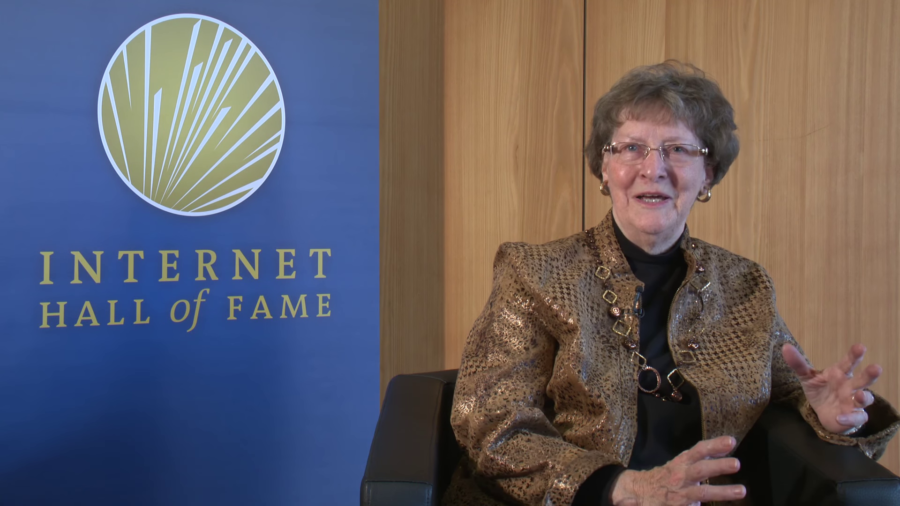 presented by Elizabeth Feinler
in Internet Hall of Fame 2012

I’m Elizabeth Feinler, usu­al­ly known as ​“Jake.” That’s my nick­name. And I ran the con­tract for the Network Information Center on both the ARPANET and the Defense Data Network back in the 70s and 80s.

There were two big ser­vices on the net­work at the time. One was the NIC and one was the NOC; Network Operations Center, Network Information Center. The NOC was more involved with whether the back­bone was—everything was work­ing. We were more involved with keep­ing peo­ple informed. And one of the things I used to pride myself on was if a new group came along, and often that would be some­one say­ing, ​“We’re going in this direc­tion.” And I would say well, the Internet’s—you know, there’s a way of doing busi­ness, a way of inter­act­ing with peo­ple. And we would intro­duce them to that.

We pro­vid­ed— In the ear­ly days, noth­ing was online. There were no online doc­u­ments. So it was a lot of hard­copy, and we made a tran­si­tion from pro­vid­ing infor­ma­tion in hard­copy to pro­vid­ing infor­ma­tion online. And one of the things I kind of pride myself on, in the ear­ly days we put out the direc­to­ry, which was sort of a phone book of the Internet. And there were a lot of mil­i­tary peo­ple, there were a lot of grad­u­ate stu­dents. So there was a spec­trum of users and developers.

And these were in the 70s. There were a lot of strong feel­ings about the Vietnam War, the mil­i­tary and what­not. So I took it upon myself not to put any­body’s title in the direc­to­ry. So that meant that every­body was talk­ing to every­body and they did­n’t know who they were talk­ing to. I thought that was kind of demo­c­ra­t­ic at the time.

First of all, the Network Information Center was in California. And most of the mil­i­tary users were—not all, but a lot of them, they were all over the world, actu­al­ly, but a lot of them were in dif­fer­ent time zones. So we would come on ear­ly in the morn­ing and then we’d still be get­ting tele­phone calls as we went out the door. And so final­ly by the time I left, we had an offi­cial phone ser­vice hot­line from five in the morn­ing until five at night California time, and that was eight o’clock at night on East Coast time.

But the machines were very crowd­ed, and they were very tiny. And you could­n’t run a pro­gram and have users using it at the same time. So, if you want­ed to run a big pro­gram you usu­al­ly had to do it overnight. So some­times we would be there till mid­night, and some­times we’d do what we called a rollover. You’d be there all night and then have to run the hot­line the next morn­ing, not sure who you were at that point, but there was a lot of ded­i­ca­tion. I remem­ber com­ing up there when we were cut­ting over to TCP/IP. It was a lot of work. And I remem­ber one my pro­gram­mers, I went down­stairs to get some­thing. I came back up and he’s asleep on the stairs. He went down to get a Coke and he fell asleep on the way back. So that was the kind of ded­i­ca­tion. Everybody was real­ly ded­i­cat­ed to mak­ing this thing work.

Privacy was not an issue. And I think that secu­ri­ty was­n’t, in the sense that most peo­ple were builders of the net­work in my time. So they want­ed things to be open so they could get at and fix them, change them, look at them, com­pare. You know, it was a kind of—it was a research envi­ron­ment. From the time that I was on, I would say the World Wide Web hit just about that time—it was start­ing up when I left. And that is the killer app. That is the thing that opens the net­work up to the world. And it was very excit­ing. And of course the com­mer­cial­iza­tion of the net­work. In my day, all the com­pa­nies were try­ing to get into it. Now they own it. So it’s a whole dif­fer­ent situation.

Well, I’m very pos­i­tive about— I mean, the access that peo­ple have is incred­i­ble now. You know, as I said I went to this small uni­ver­si­ty. It was a state col­lege. There was no way we had access to the kind of infor­ma­tion that any kid has today. And that’s fas­ci­nat­ing to me. Also the way peo­ple can inter­act with each oth­er. I mean, could any­body have imag­ined their grand­moth­er using a com­put­er? I mean, this is ridicu­lous, and it’s won­der­ful. But it’s explod­ed so fast that there are prob­lems, and they’re going to have to be worked out. And so that’s a con­cern. There’s things on the net I wish weren’t there, but it’s a vehi­cle. There’s going to be good, there’s going to be bad. And I don’t think using the vehi­cle as the ham­mer is going to be the answer. We’re going to have to work it out as humans, like we always have to work out things that are good or bad.