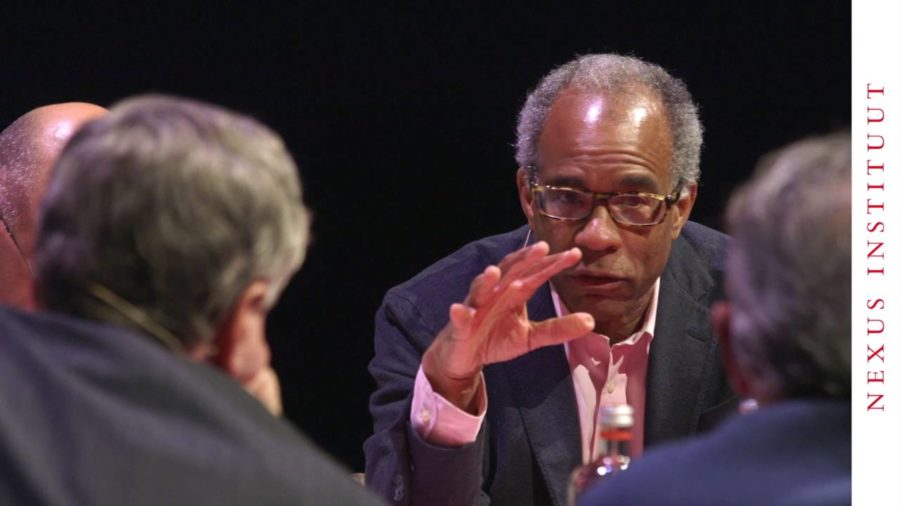 The Divided States of America

Rob Riemen: Obama start­ed his pres­i­den­cy with say­ing you know, ​“I’m the uni­fi­er [indis­tinct] Republicans, Democrats…the United States of America.” Apparently he was not that suc­cess­ful in break­ing the grid­lock. If you would have been President, how would you get a United States of America? How to do it, what’s the trick?

Jeb Bush: Well first all, I don’t think Washington is the def­i­n­i­tion of who we are as a nation, for starters. And I think shift­ing pow­er away from Washington has to be part of the solu­tion to this. And where there’s much more engage­ment by peo­ple in hav­ing a say in their own lives. I mean, you can’t out­source this to an ever…you know, larg­er and larg­er gov­ern­ment and expect a good result. You have to assume that the peo­ple that dis­agree with you aren’t motivated…that they love the coun­try the same way. I have deep dis­agree­ments with Barack Obama, but I don’t think it… I think he loves the coun­try. And he’s just got a dif­fer­ent mind­set about how to go about it. And I think he’s wrong about that but I don’t ascribe bad motives to make my point better.

And as President…look at Johnson after… I’ve been I’ve been crit­i­cized by telling this sto­ry because peo­ple take it out of con­text like some­how I’m a big believ­er in the lead­er­ship skills of Lyndon Johnson. But when John Kennedy was assas­si­nat­ed, in a six-week peri­od, he first got a bud­get that was passed that had a year-to-year decline in it; first time since World War II. And he did that by being all in and deal­ing with peo­ple that were not from his par­ty as well as Southern Democrats that con­trolled the bud­get process. Then he got the Civil Rights Bill passed. In a six week peri­od. Now part of it was the peo­ple felt you know, hor­ri­ble of the assas­si­na­tion of Kennedy. And he got the tax cut—the Kennedy tax cut is real­ly Lyndon Johnson’s doing.

All of this hap­pened in a brief peri­od because there was com­plete engage­ment. He cajoled, he was active­ly engaged. He was­n’t pas­sive and removed. And he did­n’t ascribe bad motives or try to demo­nize peo­ple that ulti­mate­ly had to be part of the solu­tion, and he shared the cred­it. This is not the—

Bush: Yeah! This is not the most com­pli­cat­ed thing in the world to do today. It seems like it’s almost impos­si­ble to do today, but there are thou­sands of exam­ples of this hap­pen­ing in city coun­cils with may­ors, and state leg­is­la­tors with gov­er­nors. And it can hap­pen again in Washington. To assume that it can’t hap­pen, that some­how it’s impos­si­ble for the log­i­cal way of get­ting to yes, that we just elim­i­nate that as a pos­si­bil­i­ty, we do it at our peril.

Randall Kennedy: I want to pick up, though, on a point that you made ear­li­er which is in a way, would you say— What you just said about Lyndon Johnson’s all true…I have a lot of respect for Lyndon Johnson. The polit­i­cal cul­ture in which he was deal­ing, how­ev­er, was in many respects an eas­i­er one than any pres­i­dent would have to deal with today, and in part because of cer­tain demo­c­ra­t­ic achieve­ments. There were with respect to gen­der total­ly different…you know, polit­i­cal cul­ture, where women did not fig­ure as impor­tant. People in American polit­i­cal cul­ture, wom­en’s issues, did not fig­ure as impor­tant polit­i­cal issues in American culture.

With respect to race. I mean the fact of the mat­ter is you know, that’s right Lyndon Johnson did a lot of good things, but the peo­ple who were the polit­i­cal class at that moment were vir­tu­al­ly all white men. It was a far less var­ie­gat­ed, diverse and there­fore a far less charged polit­i­cal envi­ron­ment than we have now. So, in an iron­ic way some of the things that we’re moan­ing about are actu­al­ly instead of us view­ing them as alto­geth­er bad things…in a large degree they’re good things. I mean you know, when there are new actors, you’re going to have fric­tion, you know. In the time that you’re talk­ing about, in strate­gic places in American polit­i­cal cul­ture, you did­n’t have Latinos, and blacks, and women, there­fore you did­n’t have the fric­tion. Now, you have that pres­ence, you have fric­tion. And you know, frankly it’s a good thing.

Kennedy: It’s going to be tough.

Bush: All I’m say­ing is Johnson did…he got peo­ple to do things that they did­n’t expect that they were gonna do.

Kennedy: No, I agree with that.

Bush: And that’s the sign of lead­er­ship that is the way you break through to this— The yet-to-be-defined sys­tem that we’re mov­ing towards—it’s unde­fined yet—that looks pret­ty ugly right now, it’s going to require that kind of cat­a­lyst of pub­lic lead­er­ship. And it exists all across the coun­try, it’s just not exist­ing right now in Washington. It’s just not…you know, it’s dead tem­porar­i­ly at least.

Bush: Coulda told the sto­ry of…on the Team of Rivals, about how the Emancipation Proclamation, how Lincoln got things done. I mean—

Wilentz: Keep on going with that movie. And show Lincoln—

Wilentz: —in the mid­dle of the [indis­tinct]. It was all— Getting the Thirteenth Amendment through was about pol­i­tics, how pol­i­tics oper­ates. It involves engage­ment, it involves under­stand­ing where your oppo­nen­t’s weak­ness­es are, but also not rip­ping him down, but fig­ur­ing out how to get it done. And this is an art which I think has been demo­nized, fun­ni­ly enough. The idea is oh, you’re just gonna come in there and take over and make it happen—make America great again ​’cause I can do it. That’s not how pol­i­tics works in this coun­try. Never has been.

Roger Berkowitz: Come back to the Randy’s point before. Because I thought it was real­ly impor­tant. I mean I think you’re absolute­ly right that we live in a changed cul­ture that has many more voic­es in it, that have to be lis­tened to, and let’s say less…dogmatic par­ti­san con­sis­ten­cy. And I think one of the things that we have right now is we have a nation­al system—a polit­i­cal system—that still sees itself as I think Anne said this before, lib­er­al and con­ser­v­a­tive. I’m not sure that if you look at peo­ple around the coun­try they’re all lib­er­al or con­ser­v­a­tive. They have very many dif­fer­ent view­points. There’s a lot of mul­ti­ple iden­ti­ties going on in this coun­try. Many peo­ple have three or four, or five, or six iden­ti­ties that they iden­ti­fy with. And we have cre­at­ed a nation­al polit­i­cal debate that fits peo­ple into cat­e­gories: left or right, con­ser­v­a­tive, Republican, Democrat, whatever.