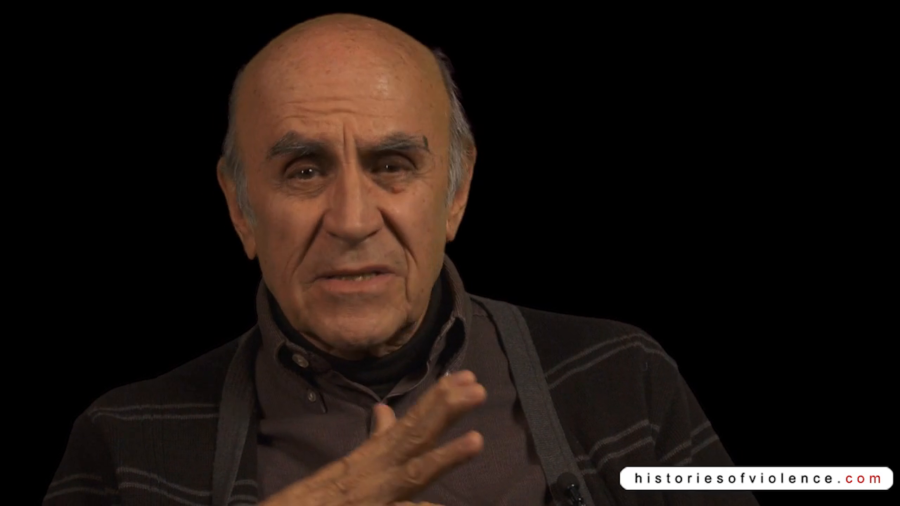 Gustavo Esteva: It is very per­ti­nent to talk asso­ci­at­ing this with the Zapatistas. You know, we are in the twen­ti­eth anniver­sary, twen­ty years ago in January 1st, 1994, we had the begin­ning of the Zapatista upris­ing. And to under­stand it we need to see what was hap­pen­ing with these peo­ple before the upris­ing, how they came to that ter­ri­ble deci­sion of start­ing an armed uprising.

In the 70s we were say­ing that in the high­lands of Chiapas we were com­mit­ting geno­cide in Mexico. In this area of Mexico, in the south of Mexico, next to Guatemala, is an area where the peo­ple were suf­fer­ing like mad. All the kinds of suf­fer­ing that you can imag­ine. In the 70s, in the 80s, they were dying like flies of hunger, of hor­ri­ble dis­eases. One day, the now-famous Subcomandante Marcos said that in the vil­lages there were no chil­dren because all of them were dying. You were talk­ing with a woman and she will tell you, ​“You know, I had eleven chil­dren but only two are alive.” That was the nor­mal sit­u­a­tion. They had a very prim­i­tive pow­er struc­ture killing them, oppress­ing them. Most of them were becom­ing alco­holics because they were get­ting their pay with some salary and posh, a ter­ri­ble kind of liquor that real­ly poi­soned them.

They tried every­thing. They tried polit­i­cal orga­ni­za­tion, eco­nom­ic orga­ni­za­tion. They had that incred­i­ble march, 3,000 peo­ple march­ing to Mexico City 2,000 miles to present their claims. And nobody heard. Not the gov­ern­ment, and not the civ­il soci­ety. Nobody heard. When they came back after this march and in 1991 they took the deci­sion of declar­ing war to the Mexican gov­ern­ment, from the very begin­ning, they said that they were not guer­ril­la. The def­i­n­i­tion of the guer­ril­la in terms of Che Guevara is a fish that swims in the sea of the peo­ple. This fish, the group of rev­o­lu­tion­ar­ies that start­ed the guer­ril­la, and then the peo­ple sup­port­ing that group of revolutionaries.

They said, ​“We are not the fish, we are the sea.” But it is lit­er­al­ly true. It was hun­dreds of com­mu­ni­ties in pub­lic assem­blies tak­ing the deci­sion, ​“We have no oth­er option. We need to declare the war to the Mexican gov­ern­ment.” The main pur­pose per­haps was not to defeat the Mexican army but to be heard, because they were real­ly dying. And when, on top of this, because of the sig­na­ture of the North American Free Trade Agreement, they can­celed the option—the con­sti­tu­tion­al pro­tec­tion for the land. The con­sti­tu­tion­al right of the campesinos, of the peo­ple, to have access to land. They became dis­pos­able human beings.

It is very clear in the case of Mexico what NAFTA rep­re­sent­ed. It meant basi­cal­ly that in the past, cap­i­tal, or landown­ers, or dif­fer­ent kinds of peo­ple, were using them, were hid­ing them in ter­ri­ble con­di­tion as semi-slaves, in very bad con­di­tions. But they were using them. After NAFTA, because of NAFTA, because of the con­di­tions of the free trade and neolib­er­al­ism and all these poli­cies, they will become disposable—they had no use for them. And they will be doomed to die. And instead of dying in those ter­ri­ble con­di­tions, they con­sid­ered that the only thing they still had was their dig­ni­ty. And then they used that dig­ni­ty to start first their mil­i­tary train­ing, and then to start the uprising.

I would say imme­di­ate­ly that in this upris­ing, the Zapatista Army [of] National Liberation had 40% women. How this army was con­sti­tut­ed? Every com­mu­ni­ty sent a few, five, ten, twen­ty peo­ple to the army to get the mil­i­tary train­ing. And they’d take care of the fam­i­lies, etc. And then 40% of them were women. But we dis­cov­ered lat­er that the women occu­pied 60% of the posi­tions of com­mand. Positions of com­mand obtained—the ranks were defined in the train­ing because of their mer­its in the train­ing. And then the women occu­pied 60%, and per­haps it is the only case in which women were overrep­re­sent­ed. I will talk more about this because the ques­tion of women is a very cen­tral thing when you talk about the Zapatistas. In a sense we are say­ing that the Zapatistas by nature is a kind of fem­i­nine movement.

I must tell you that that first week of January 1994, I was in com­plete per­plex­i­ty. For thir­ty years I had been absolute­ly con­vinced of non-violence. I had embraced non-violence, after try­ing some­thing of this kind in the 60s. Then I was ask­ing myself, Gustavo what’s hap­pen­ing with you? You are very hap­py and very enthu­si­as­tic about the Zapatistas. You are in the streets with them. But what about vio­lence? That they are killing each oth­er in Chiapas right now. What is hap­pen­ing with you?

Then I [read] my Gandhi. And I think what I found is a way to under­stand the Zapatistas and what is hap­pen­ing today with vio­lence in Mexico. Gandhi is asked by his son—he suf­fered an attempt, and then his son asks him, ​“What should I do if some­one comes and tries to kill you? Should I preach non-violence?”

And then Gandhi smiles and he said, ​“What you nev­er should be is a cow­ard. Cowardice is the worst kind of vice that you can have. You must not be a cow­ard. But, vio­lence is for the weak. If I am preach­ing non-violence, it’s because I don’t see any rea­son why 300 mil­lion peo­ple in India are afraid of 150,000 British. Because they are strong, they should use non-violence. It would be crim­i­nal [?],” said Gandhi, ​“if I am preach­ing, I am telling non-violence to a mouse at the point of being devoured by a cat. This is not for him. We need to con­sid­er that vio­lence is the last resource of the weak.”

And I think this is a very good sto­ry to illus­trate what hap­pened with the Zapatistas. They were the weak. Nobody heard. They tried every­thing and they were real­ly dying. And they decid­ed to have this very lim­it­ed amount of weapons—they they were just a few weapons in their hands—to start their upris­ing. The last resort of the weak.

But then they became the strong. In a few days we were by the mil­lions in the streets, try­ing to tell them, ​“We are with you, you are not alone. We love what you are say­ing, but we don’t want more vio­lence in Mexico. Please stop the vio­lence.” And then in January 12th, 1994, twelve days after the begin­ning of the upris­ing, there was a uni­lat­er­al cease­fire, and the Zapatistas not only care­ful­ly respect­ed the cease­fire for twen­ty years—they’re not using their weapons, not even for self defense. They are clear­ly the cham­pi­ons of non-violence in Mexico. This is because they became the strong. Because they got the sup­port not only in Mexico, but out of Mexico, of many peo­ple that were lis­ten­ing to what they were saying.

And one very impor­tant thing in dis­cussing the Zapatistas is their first impor­tant con­tri­bu­tion was hope. Before 1994, until 1993, we had glob­al­iza­tion as a kind of real­i­ty that you need to adapt to it. For some peo­ple it was a threat, for some oth­er peo­ple it was a promise, but for every­one it was a real­i­ty. You need to accept it, things are like that, the world is like that. The Zapatistas were the first say­ing, ​“No, real­i­ty is not like that. We can­not accept this pol­i­cy, this ori­en­ta­tion, this gen­er­al vision of the sit­u­a­tion in which we are just dis­pos­able human beings. We can­not accept that.” All the anti-[?] move­ments after that acknowl­edge that the Zapatistas were the first. It was like a wake-up call.

And they came with an open­ing, a wake-up call, and at the same time the hope. We are suf­fer­ing, clear­ly, a cri­sis of hope. And it is the Zapatistas that in a very dif­fi­cult sit­u­a­tion, when the world is falling apart, when truths and insti­tu­tions that gov­erned us for 200 years are lit­er­al­ly falling apart, when Mother Earth is real­ly in a very seri­ous con­di­tion and the sur­vival of the human species is in danger…in that ter­ri­ble moment, in the moment of hor­ror, the Zapatistas brought a light of hope. A pos­si­bil­i­ty of hope. When they were accused by some­one of being pro­fes­sion­als of vio­lence, they imme­di­ate­ly react­ed, ​“No, we’re not pro­fes­sion­als of vio­lence. We are pro­fes­sion­als of hope.” They had been cul­ti­vat­ing hope. And hope, in this Zapatista tra­di­tion is not the con­vic­tion that some­thing will hap­pen in a cer­tain way. It’s the con­vic­tion that some­thing makes sense.

I want to read some things that illus­trate one very impor­tant point for me. Zapatistas are unique, are sin­gu­lar, and at the same time are typ­i­cal. They clear­ly illus­trate a kind of insur­rec­tion that is hap­pen­ing all over the world. People are reclaim­ing their dig­ni­ty, and with that dig­ni­ty they are try­ing to cre­ate some­thing dif­fer­ent. They are now mobi­lized. And what Ana María said, let me read what [she] said. As you know, the Zapatistas used these ski masks to present them­selves. And then she said,

This is a very very impor­tant state­ment for the Zapatistas. I would say that this is com­ple­ment­ed with some­thing that defined their posi­tion. At some point, many peo­ple were send­ing things to them. Were send­ing mon­ey or were send­ing objects of dif­fer­ent kinds. And even they were com­ing and they orga­nized that they called the Zapatour because it was kind of ​“rev­o­lu­tion­ary tourism.” They want­ed to come and touch the Zapatistas and be there with the Zapatistas.

But this was also very humil­i­at­ing. Then at one point, Subcomandante Marcos came with a com­mu­niqué and said, ​“Now I am forced to include in my back­pack some­thing that came as char­i­ty,” to one of the com­mu­ni­ties. It’s one red high heel. Not the pair, just one. And for the jun­gle, a high heel? Can’t you imag­ine? Can you imag­ine the humil­i­a­tion of these peo­ple when they get a box with things that some­one took from the clos­et and sent to these poor peo­ple. And then Subcomandante Marcos declared, ​“If you want to offer your help to these poor indige­nous peo­ple strug­gling against a bad gov­ern­ment, thanks but no thanks. We don’t want your help. If you think that our strug­gle is also your strug­gle, please come. We have plen­ty of things to talk.”

I think this is the point. I think we are in the same strug­gle. I think we can see it is not the Zapatistas out there in the south of Mexico, in the jun­gle, la sel­va la cal­dona, strug­gling against a bad gov­ern­ment, try­ing to cre­ate a small piece of par­adise in the jun­gle. It is their strug­gle. It’s also our strug­gle, every­where. In every city in every coun­try over the world. We are in a very dif­fi­cult moment, in a ter­ri­ble moment of humankind. But there is hope. The Zapatistas illus­trate that hope, and then we can build some­thing dif­fer­ent with that hope in our hands.