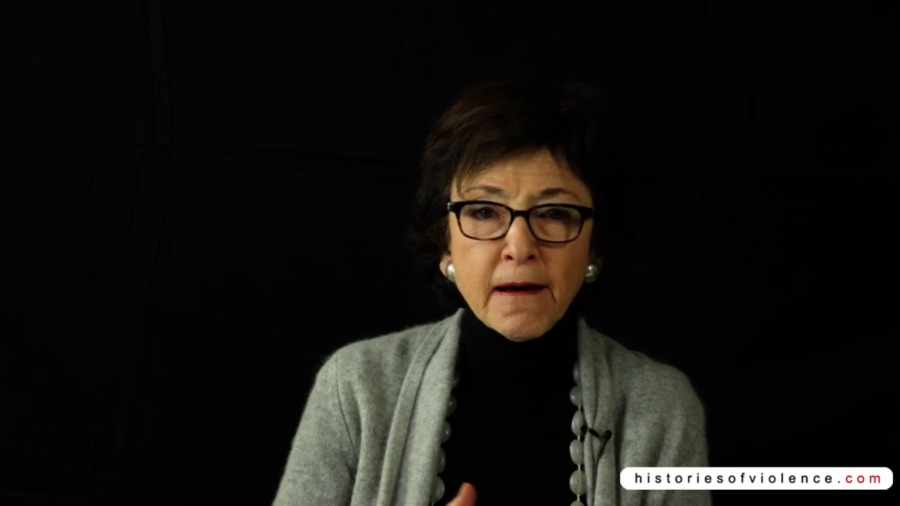 So I’m not talk­ing about the kinds of life that is dis­pos­able in obvi­ous­ly clear instances like geno­cide, or mas­sacre, or famine—often state-induced, or civ­il war even. So this is not about Rwanda. This is not about Syria at the moment, either. It’s about what I’ve come to think of as struc­tur­al dis­pos­abil­i­ty. In oth­er words, the peo­ple who get caught in the cracks in the sys­tem. They are not nec­es­sar­i­ly them­selves ignored as a prob­lem. They are not inten­tion­al­ly nec­es­sar­i­ly, either, neglect­ed. But nonethe­less their lives become dis­posed of. They become disposable.

And I came to this from two very dif­fer­ent exam­ples. The first is the plight of the sur­vivors of the earth­quake tsuna­mi and nuclear acci­dent in Japan in March 11th, 2011, where some 20,000 lives were lost. But some 300,000 peo­ple were dis­placed. And tens of thou­sands still liv­ing in tem­po­rary hous­ing. Many of the hun­dreds of thou­sands of peo­ple, actu­al­ly, will not be able to go home—there is no home to go back to. They are elder­ly. They are poor. They are often the grand­moth­ers and grand­fa­thers of fish­ing families.

And then there is the larg­er group of peo­ple who are affect­ed by the nuclear explo­sion, who have been told by the gov­ern­ment that of course it’s safe. Now, this is a very wide area—this is not just the area around. So all of the peo­ple who have been told by the gov­ern­ment and by the sci­en­tists that it’s safe to—not to return home, but safe for peo­ple to eat the fish and the pro­duce grown in Japan or caught in the waters.

And all of these peo­ple are actu­al­ly the object of a great deal of pol­i­cy. A great deal of civ­il soci­ety atten­tion. A great deal of inter­na­tion­al aid. A great deal of what you would call—what I would call, anyway—social atten­tion. These are not peo­ple who have been ignored. Nonetheless, their lives have become dis­pos­able. They are liv­ing in what one of my col­leagues the oth­er day called a ​“per­ma­nent paren­the­sis,” an end­less present.

So my ques­tion is, how do these peo­ple’s lives become dis­pos­able? When there is social atten­tion, when there is inter­na­tion­al atten­tion, when there is human­i­tar­i­an atten­tion. And my answer is that it’s a com­bi­na­tion of struc­tur­al con­di­tions. A lot of them long-standing, some of them new. It’s easy to say, ​“Well, the state will always insist on sol­i­dar­i­ty rather than—” and the famous Japanese word, you just keep on going; the encouragement.

But it’s not just the state. The state is obvi­ous­ly a prob­lem here. But it’s also lots of oth­er social rules, reg­u­la­tions, habits, cus­toms, atti­tudes, that are in place and that are not nec­es­sar­i­ly held by one per­son or anoth­er. In fact, struc­tur­al dis­pos­abil­i­ty means you can’t real­ly find the agents or the forces respon­si­ble. That’s the def­i­n­i­tion, I think. It is dif­fused. And when they talk about build­ing a huge sea wall off the coast to pre­vent a tsuna­mi (which every­one knows will not pre­vent a tsuna­mi), one has to go way back to see why the con­struc­tion com­pa­nies would be the inter­ests they are. Why some in the local­i­ty would favor it even though they know it won’t work. In any case, this is a whole sys­tem­at­ic scheme or entan­gle­ment that will explain, I think—or that you have to look at to explain why these lives become disposable.

Now, this is an obvi­ous exam­ple and you can give lots of oth­ers like the mil­lions of refugees now who will nev­er be able to go home again from their civ­il war or strife-ridden soci­eties. It’s not that they’re not attend­ed to. They are, but the prob­lems and the num­bers are so great that their lives have become dis­pos­able. And that’s true of the une­d­u­cat­ed uninoc­u­lat­ed poor in glob­al soci­ety. It’s true of the so-called pre­cari­at in advanced soci­eties— Anyway, we all know about these things.

My oth­er exam­ple comes from a place where we don’t actu­al­ly talk about dis­pos­abil­i­ty. And that is the exam­ple from the United States. Everyone’s been read­ing that the new Affordable Care Act isn’t work­ing because the web site’s not work­ing and peo­ple can’t reg­is­ter. That is real­ly the tip of the ice­berg when it comes to peo­ple in the United States who are enti­tled to care—medical care. Or social pro­grams. Or oth­er kinds of poli­cies that are there to help them but do not have the capacity—the ability—to let’s put this way: access (mean­ing the com­put­er word), log on, find a fax machine. Even the help that’s there is inac­ces­si­ble to them. You have to be prac­ti­cal­ly a researcher in order to claim the insur­ance ben­e­fits that are due you even if you are insured.

And so this is an exam­ple of struc­tur­al dis­pos­abil­i­ty. Now, a lot of peo­ple get caught in this. You’re read­ing about them now because of the healthcare—the num­bers of sto­ries of the unin­sured. But it’s not only that. So here I see an advanced soci­ety which has…a very low lev­el, but still—social pro­grams and pos­si­ble care, in which peo­ple’s lives become dis­pos­able because there’s no way for them to lit­er­al­ly, in the com­put­er sense, access their benefits.

Now, that’s not so obvi­ous, I think. I mean, that’s not one we talk about. But any­one who lives here who has gone through these process­es knows that there are many—there are mil­lions of peo­ple who can­not do this.

So, that’s what got me start­ed on struc­tur­al dis­pos­abil­i­ty. And then I start­ed to think, well how do we jus­ti­fy, how do we…what are the log­ics of dis­pos­abil­i­ty? Or the ideolog­ics, if you want, the ide­olo­gies of it? Because when you start to look at social and polit­i­cal thought, obvi­ous­ly you don’t find this kind of think­ing in the great polit­i­cal thinkers. They…equity, yes; lib­er­ty, yes; things of that sort. But not… They don’t— I mean, the crit­ics, yes, but not the peo­ple who gen­er­ate the thought on which most of our soci­eties are based. And I don’t only mean Western society.

Well one expla­na­tion is the prov­i­den­tial one. That is to say you find it in sev­er­al vari­eties. In oth­er words, these things are inevitable. These peo­ple are unde­serv­ing. They don’t help them­selves. Or cap­i­tal­ism works through cre­ative destruc­tion, and there are going to be peo­ple left behind in it. So the rhetoric of self-reliance is very often used that way. That peo­ple, if they were self-reliant then they would­n’t fall between the cracks.

But all of this has to do with a kind of prov­i­den­tial expla­na­tion that sug­gests that there’s inevitabil­i­ty or self-responsibility here. And that is a jus­ti­fi­ca­tion that explains things away. And in the old days it explained things away with a phrase that was very well-known in my grand­moth­er’s gen­er­a­tion in the United States, which was ​“Man pro­pos­es, God dis­pos­es.” And in effect that’s what the prov­i­den­tial expla­na­tion says: ​“not our job.”

The sec­ond way we talk about it has to do with the eth­i­cal think­ing that talks about moral dis­tance. I don’t know if you know there’s a sto­ry by Ursula Le Guin called ​“The Ones Who Walk Away from Omelas?” It’s a sto­ry of a per­fect soci­ety. Omelas is a per­fect town, where every­one is joy­ful, where there’s no crime, there’s no guilt, there’s just fes­ti­vals and hap­py chil­dren and flute play­ers. And it’s a con­stant fes­ti­val, if you like. And she paints quite an incred­i­ble scene of joy.

And then she tells us about the child in the base­ment. There is a small child locked up in a cel­lar. And has been locked up—is deranged, and dirty, and com­plete­ly unkempt. Fed through a slit in the floor. And every­one in Omelas knows the child is there, because they are tak­en to see that child. And then they go back to their lives. They all know it’s there, and they all know that their hap­pi­ness is premised on the mis­ery of that child. And occa­sion­al­ly, there are peo­ple who after they see the child, walk out of the cel­lar and walk away from Omelas.

That’s a story—it’s based on the Dostoyevsky sto­ry about the scape­goat, right. It’s a util­i­tar­i­an sto­ry about what kind of bar­gains we make. I mean, we all have chil­dren in the base­ment. The glob­al chil­dren in the base­ment are in the devel­op­ing coun­tries, and by chil­dren I mean the devel­op­ing coun­tries them­selves. Our well-being (And it could be any ​“our.” Any soci­ety has an ​“us,” a ​“we.”) is built on the backs of oth­ers. And these social bar­gains, these util­i­tar­i­an bar­gains where we’ll trade the mis­ery of one child for the so-called bet­ter good of all, is anoth­er way that dis­pos­able life becomes acceptable.