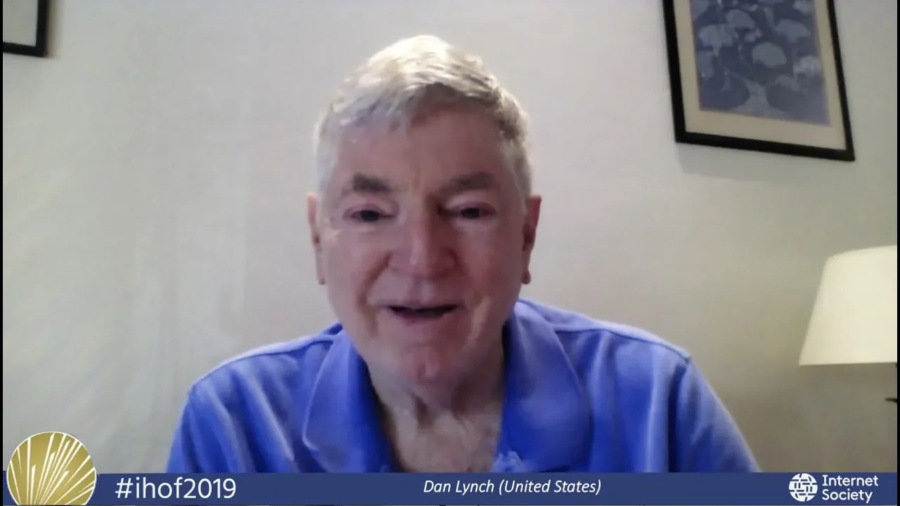 Dan Lynch: Sorry I can’t be with you today. I can’t trav­el much any­more. I had a stroke ten years ago which did­n’t affect my brain, I don’t think, but did affect my mobil­i­ty quite a lot.

So any­way, I got intro­duced to the ARPANET in April of ​’73 at SRI—Stanford Research Institute—where I got a job as the man­ag­er of the Artificial Intelligence Computer Center. And the very first day on the job they showed me this thing called the ARPANET. And I looked at that and went wow, this is cool. I mean you know. I come from a mis­sile defense back­ground and doing that kind of work, buried in some secret place. And then came out and into the real world.

And so I played around with this ARPANET stuff for a while. And then about a year or two lat­er, a guy named Bill Plummer at BBN said to me— He was a sys­tem pro­gram­mer there. And he said, ​“Hey, I’m test­ing this new thing called TCP, and I want you to— You know, we’re doing in the build­ing here at BBN but we need a cross-country test­ing site. Will you help me?”

And I said sure. So I start­ed doing that in my spare time. And I did that for about a year with him in a lan­guage called BCPL, which was the pre­cur­sor of C. And that was a lot of fun. And then I did debug­ging with him—I had to install the code on my com­put­er, a PDP-10, a 10/X machine, which was the machine of choice for most big sites in those days.

And then I met Vint Cerf in those days, too. He was a young pro­fes­sor at Stanford. I say young because he’s two years younger than I am so he’ll always be young. And he was a neat guy. So I did that, and that was my ear­ly years as…I guess call it a devel­op­er, a debug­ger. I mean we had no idea what we were doing in those days with—I mean we knew what we were try­ing to do. But it was a lot of fun.

And then the next phase of my involve­ment with the Internet… Because in 1978, the pro­to­col was essen­tial­ly fixed, and sites on the ARPANET were start­ing to con­vert over to the Internet pro­to­cols and run­ning them side by side because…you know, we had to.

And then I moved on to Los Angeles to the Information Sciences Institute as their man­ag­er of their com­put­ing facil­i­ties. And that was the biggest node on the ARPANET in those days. It had about six machines online and about 3,000 peo­ple using them. Around the world, actu­al­ly, most­ly around the coun­try but around the world. And I was work­ing for Bob Kahn and Vint Cerf at ARPA real­ly, even though I [was] the­o­ret­i­cal­ly an employ­ee of USC.

And they told me, ​“Hey, we’re going to con­vert every­thing over to Internet. And I want you to man­age that process for machines all over the Internet.” And so I did that for a while, a cou­ple years.

And then we had a flag day, the last flag day in his­to­ry. That is day when they shut the ARPANET down and turned every­body on to the Internet, January 1st, 1983, that was hilarious.

So I did that. And then about a year lat­er I left that job because things were hap­pen­ing. And I want­ed to get involved in a start­up of some sort. And so I moved back to Silicon Valley, with no job just you know, look­ing for…because friends of mine had start­ed Cisco and they’d start­ed Sun Microsystems and I’m going wait a minute. I can do this too. And I tried that and failed. Two or three times, actually.

And then I real­ized in about late ​’85, ear­ly ​’86 that peo­ple all over the world were try­ing to build Internet prod­uct stuff, and they were doing a mediocre job. So, I became an edu­ca­tor, I call myself now, of Internet tech­nol­o­gy. And I start­ed a com­pa­ny called Advanced Computing Environments. I thought ​“That’s a clever name.” And to teach engi­neers how the Internet worked, because…I knew, and I knew all the peo­ple that built it, you know. They were all friends of mine. You know Jon Postel and Danny Cohen, you know Dave Clark and Dave Mills, and Vint Cerf.

So I start­ed this thing. And even even­tu­al­ly it became called TCP/IP Interoperability Conference and Exhibition. And that grew like Topsy for three or four years, just grew from 300 peo­ple to 50,000 peo­ple in four years. I think you got some­thing when the growth is that fast, eh?

And then I sold that com­pa­ny because I did­n’t real­ly want to run a giant trade show com­pa­ny. And then I start­ed look­ing around for things to do in the ear­ly 90s. And I real­ized oh, the Internet’s not gonna take off unless there’s a way to send mon­ey around. And anoth­er pal, guy, found me and we start­ed a com­pa­ny which we called CyberCash to put cred­it cards and move mon­ey on the Internet. And we built that com­pa­ny with Steve Crocker. He was our CTO. And so we built that com­pa­ny and lost it. And after a cou­ple of years, we went bank­rupt. Because we did­n’t have enough cus­tomers. We had great tech­nol­o­gy and mediocre marketing.

And anoth­er com­pa­ny came along with, I’ll just be blunt, great mar­ket­ing and mediocre tech­nol­o­gy. And guess who won. And that com­pa­ny’s called PayPal. And they even­tu­al­ly bought all our tech­nol­o­gy out of bank­rupt­cy. And so it’s a suc­cess, a great suc­cess. Bravo for them.

So that’s my sto­ry, and I’m stick­ing to it. And I hope you guys have a great time in Costa Rica. I’d love to be there. My children—all of my adult chil­dren have been there. But I haven’t, and I would love to be there, but I can’t go. So enjoy your times. Bye bye.