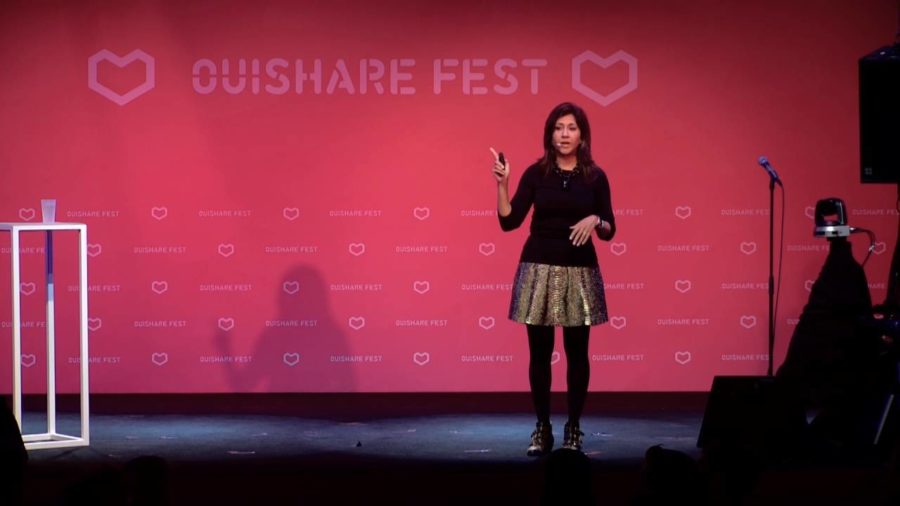 Be Warned: Copy Silicon Valley and You Will Surely Fail

So I’m going to return to English. And even though I’ve lived here for two years I real­ly wish I was stronger in French. Because it would be so love­ly to be able to talk with you more in your native tongue, too.

But as Antonin said, I moved to Paris about two years ago and it’s been actu­al­ly a remark­able cou­ple of years. I’ve got a chance to meet quite a few entre­pre­neurs who live here and through­out Europe. And what has fas­ci­nat­ed me is in the back­drop of all the things that have gone on here, from Nuit debout to to Charlie Hebdo, how many peo­ple are look­ing for the inno­va­tion of Silicon Valley to be part of the solution.

And as I’ve been get­ting ready to actu­al­ly return back to Silicon Valley after two years I’ve got this feel­ing in my gut that some­thing is ter­ri­bly wrong if Europe adopts Silicon Valley’s metaphor for suc­cess. And Antonin and I have been talk­ing about it for quite a while, and so he sug­gest­ed actu­al­ly that I share that with you.

So I’m not giv­ing my stan­dard talk. You can Google talks I’ve already giv­en on col­lab­o­ra­tion to thou­sands of peo­ple and see that, because that’s con­tent’s there. We thought we would do some­thing real­ly spe­cial for this moment and time, for what is it that Europe can do dif­fer­ent­ly to actu­al­ly use the model.

Now, if said gen­er­ous­ly you could say that what I’m about to talk about are myths that Silicon Valley sells to the rest the world. If you’re talk­ing about it a lit­tle bit more harsh­ly you might call them lies—whichever you choose. In fact what I want to just do is ask you to share with me what you think some of the sto­ries are that are com­ing out of Silicon Valley, and I’m going to give you a chance to do that. And as that starts I thought I would just share some head­lines I found in the last few days.

So what do you see? White men! Good one. What else? Steve Jobs saved the com­pa­ny. Yeah. You guys are going to have to be a lit­tle loud­er. Heroes. Religion? Silicon Valley as reli­gion. There you go. Shiny tech.

Well, you guys exact­ly got to where I want­ed to go, so thank you for that. I’m going to share with you what I think are three. And the big theme you just caught on is the hero, the crown. I think one of the things we do is we say, ​“Hey, find a big idea. Be the one to do it. And then gar­ner all the rev­enue from it.” And in doing so we actu­al­ly put a crown on the head. They’re all inter­linked myths, though. So if you don’t under­stand all three, you might accept some of it as being valid, and then we end up in a place we actu­al­ly don’t want to be.

So the first one is the ​“find a big idea” piece, some­times peo­ple call it the uni­corn. And I’m actu­al­ly work­ing on a book while I’m here—that’s one of the projects I’ve been doing—and stud­ied over 300 entre­pre­neurs and peo­ple who are real­ly mak­ing a huge dent in the world. And in learn­ing their sto­ries, one of the things that came up over and over again is how much their orig­i­nal efforts start­ed off as a side-project. And for sev­er­al years, in fact, was some­thing that they did­n’t even think was going to go any­where. Eighty per­cent of the sto­ries were lit­tle side-projects that for one, two, three years, they just kin­da kept chas­ing almost because they could­n’t stop chas­ing it? And then it end­ed up grow­ing because they found some­thing that…pulled them into the future.

And so when we accept the mythol­o­gy of ​“find a big idea,” I think the thing we actu­al­ly deny is the idea that mat­ters to us. And so if we’re look­ing for the million-dollar, billion-dollar, trillion-dollar idea, what about the thing that’s in pain right next to us that we actu­al­ly can notice and do some­thing about? We might ignore that.

And in fact every com­pa­ny that we cel­e­brate today, I’m sort of amazed at how much we don’t under­stand the back­sto­ry. Google, which is one of the biggest com­pa­nies in the world today, and cer­tain­ly a giant, actu­al­ly start­ed off for many years in a lab at Stanford. They were called Backrub. They were going to license their tech­nol­o­gy. And that was it. They were done. Earn mon­ey, good, bye.

And it grew and grew for what they actu­al­ly thought was real­ly inter­est­ing, which was how do you con­nect a bunch of oth­er peo­ple’s ref­er­ences instead of what a com­pa­ny want­ed to pro­mote? So if I linked to you because I thought the idea was good, that’s what was more inter­est­ing than an adver­tis­ing kind of model.

So the truth is that orig­i­nal ideas don’t actu­al­ly start out as big. They become big by what you do. First by what you notice, and then what you’re will­ing to act on.

The sec­ond one is the one that we just point­ed out of sin­gu­lar heroes. And in that set of pic­tures, also white men. So, here’s the fun­ny part is we do this thing where we talk about the founders of Google. And we ignore the oth­er part of the story.

So, the per­son who actu­al­ly did the license deal that actu­al­ly drove the first sev­en years of Google’s rev­enue mod­el was a Hispanic woman. She does­n’t show up in the major­i­ty of the sto­ries that are ever told about Google. 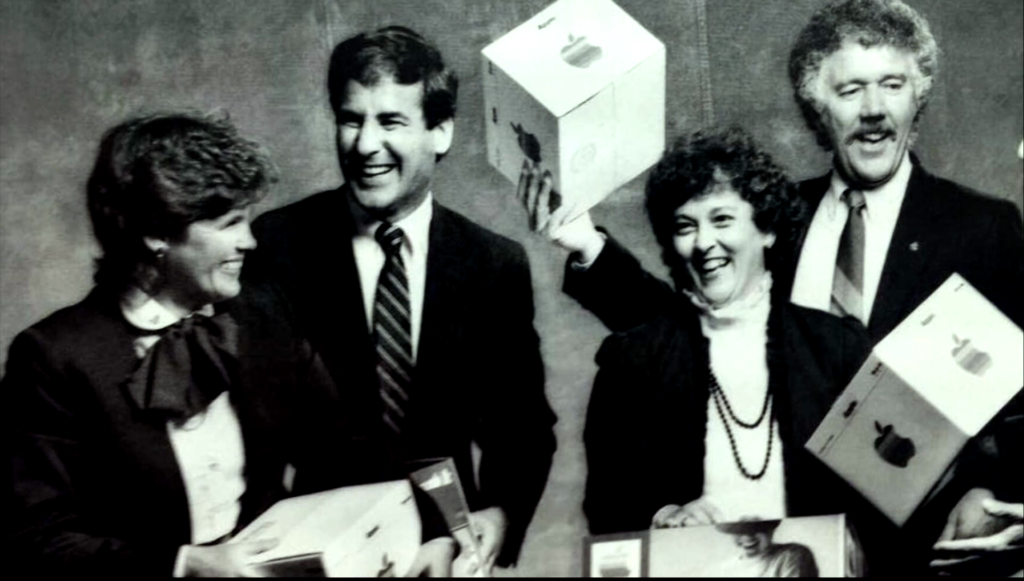 I worked at Apple ear­ly on in my career. I actu­al­ly picked apri­cots in the orchards that Apple’s build­ings were built on. Apple is one of the first com­pa­nies I worked at. I end­ed up going there to many oth­er web-related com­pa­nies. And this is the Apple of my expe­ri­ence. It had a lot of dif­fer­ence in it, cer­tain­ly not as many peo­ple of col­or as I would like, but at least it had women. And yet those women have been wiped out of the sto­ry entirely. 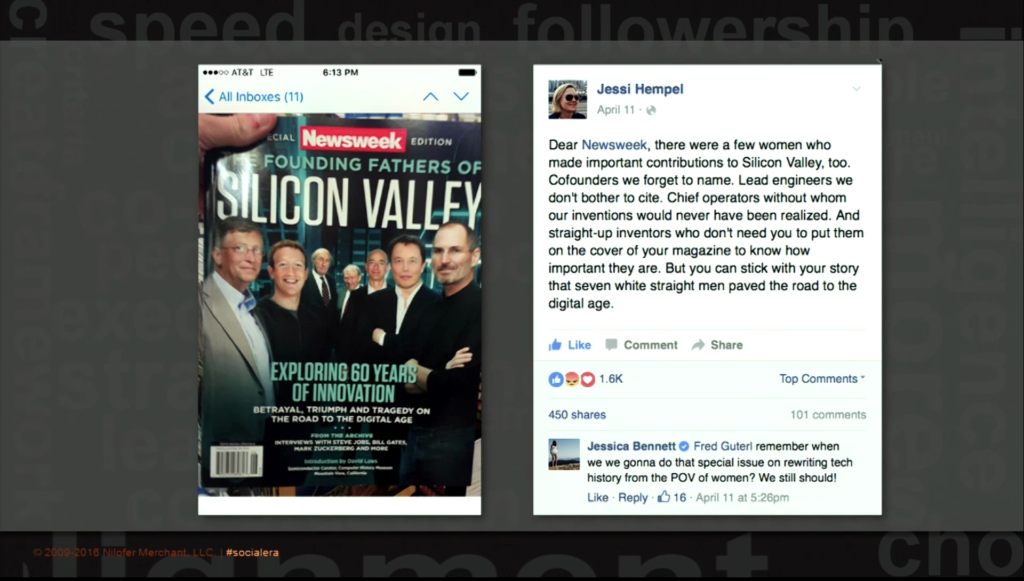 And as you noticed in the Newsweek cov­er sto­ry, which they called the ​“fathers” of inno­va­tion, there are no women. There are no peo­ple of col­or. They’ve just com­plete­ly obfus­cat­ed that. And a friend of mine who hap­pens to be also a writer point­ed out that sure, sure Newsweek, you can go ahead and say that but that means that you’re ignor­ing the CFO that made the com­pa­ny valid. You’re ignor­ing the CEO that made Facebook prof­itable. You’re ignor­ing all the engi­neers and busi­ness peo­ple who came along­side those teams.

So the actu­al truth of the sto­ry is that ideas may cer­tain­ly be born of you, like in the Google case, but they grow through the pow­er of us. And when we obfus­cat­ed that truth, then what we do is we ignore the peo­ple we need to build around us. We ignore the inti­ma­cy, as we talked about ear­li­er this morn­ing, that we need to have in order to trust one anoth­er in order to make an idea get bigger.

And the third one is a direct lin­eage of those oth­er two myths, which is, ​“Hey if I’m the man, and I built it, then don’t I also get to take home and gar­ner all the rewards from it?” Makes sense, right? If I’m the man on the front of the cov­er of the mag­a­zine, I’m the man.

I’m think­ing you know, DARPA actu­al­ly invent­ed all the pro­to­cols that you have just fig­ured out how to build on top of. SRI actu­al­ly built a bunch of the tech­nol­o­gy that com­pa­nies now use today. And those com­pa­nies were fund­ed by gov­ern­ment mon­ey. So no one ​“invent­ed” the Internet all by them­selves. And what that does, though, is that you can say, ​“Hey man I’m it. You can ignore every­one else.” And this should wor­ry us greatly.

San Francisco pays for com­pa­nies like Twitter to build build­ings and asks them not to pay tax­es. And yet all the streets of San Francisco are full of home­less peo­ple. You will going into a Starbucks to buy a cup of cof­fee and you will get chased in by a home­less per­son. It is not a pleas­ant expe­ri­ence, but those peo­ple are not doing it for tor­tur­ing you, right. They’re doing it because they have no oth­er place to go because the gov­ern­ment has failed them. The sys­tem has failed them. And then peo­ple write arti­cles say­ing, ​“I don’t want to deal with home­less riff-raff.” I as a tech per­son, who by the way am work­ing on impor­tant things like the Internet, should­n’t have to deal with that.

It is not— I wish I could say in this case the truth was dif­fer­ent. But I’m going to have to name this a wish more than a truth. In US we do this thing of cel­e­brat­ing indi­vid­u­al­ism, Silicon Valley espe­cial­ly. And they don’t under­stand the plu­ral­i­ty of how we actu­al­ly get things done. So in French lan­guage I think about this as the vous, not the tu. The vous, not the you.

So at all times, vous is about both this idea of respect. So I will address some­one more for­mal­ly with a vous, so it’s a sign of respect. But it is also a sign of the plu­ral­i­ty. So I can use the same word. And this is what I think is the best thing about the European cul­ture. And if you accept what Silicon Valley sells, you’re deny­ing your absolute strength and what will actu­al­ly make it won­der­ful for you to do inno­va­tion here, but in your own way. In a more con­nect­ed and col­lab­o­ra­tive way.

So I want to just wrap with this idea. Let’s find a new way to be. A new how. Certainly not the Silicon Valley way. Because that is just a sto­ry that will end up with us leav­ing what is our strength. Instead of sim­ply enrich­ing the few, let’s find a way to build some­thing even bet­ter, more about pros­per­i­ty and less about wealth, so we can have a soci­ety and a com­mu­ni­ty that ben­e­fits us all. Individually how we hold our­selves so we allow our­selves the ben­e­fit of the idea that mat­ters to us. Building the com­mu­ni­ty around us who will make that real—and I’m look­ing at a whole room of peo­ple who’ve made OuiShare real. And to actu­al­ly fig­ure out how to serve soci­ety, not to block it off and sit in a bus far away from it.

So that’s what I want­ed to come and share with you this morn­ing, and I hope it’s use­ful for this com­mu­ni­ty. And we’re also going to be around to have con­ver­sa­tions for the rest the day, and so I hope you guys will help me take this set of myths and trash them, and maybe fig­ure out ways that we can actu­al­ly find a way to move it into real­i­ty. How’s that? Merci.