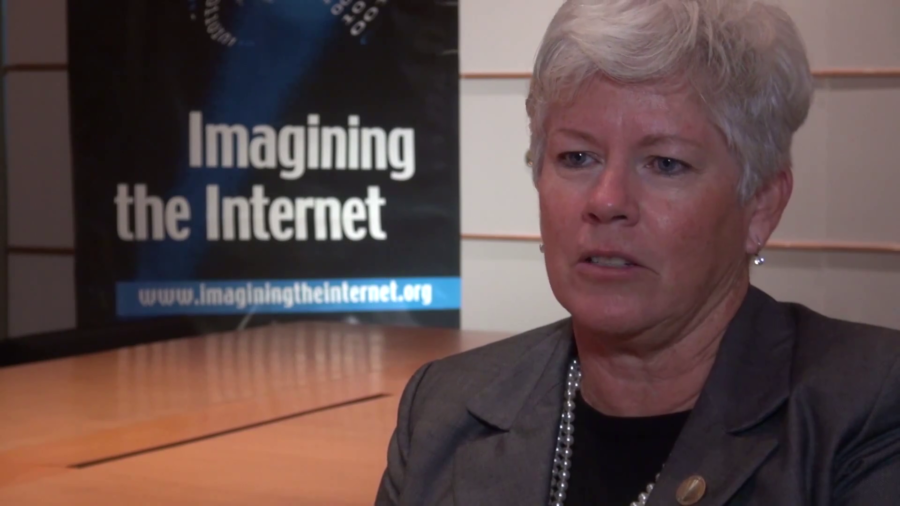 Susan Estrada: What led me here to this awards cer­e­mo­ny is some of the things that I did in the late 80s, 1980s. It was a kin­da heady time. In south­ern California, a lot of the uni­ver­si­ties were already work­ing togeth­er with the San Diego Supercomputer Center, and we decid­ed joint­ly to start a region­al net­work. And with all of our part­ners at the uni­ver­si­ties we obtained some big NSF mon­ey at the time and put togeth­er a big fast net­work that involved T1 lines—1.544 megabits per second—which today isn’t even a fast DSL line, and 56 kilo­bit con­nec­tions to cam­pus­es that were con­sid­ered to be high-performance, super fast; ven­dors did­n’t even know what we should do with them because nobody had that much data.

As a result of that we…you know, I’m a per­son I came from the phone com­pa­ny. So I liked to have ser­vice that worked. I liked to make my cus­tomers hap­py. And we were real­ly pressed at the time because there was this idea that the ​“Internet” was only for aca­d­e­mics and gov­ern­ment. But we were hav­ing a lot of com­mer­cial cus­tomers come to us and want to be able to use the Internet for con­vers­ing with their peo­ple at uni­ver­si­ties as well as at oth­er com­pa­nies around the US.

So, we worked with anoth­er firm—a cou­ple of firms, PSI and UUNET, and togeth­er the three of us formed some­thing called the Commercial Internet Exchange. And when we did that that was the first time ever that com­mer­cial traf­fic was able to pass through the Internet. And that was in 1991. So, it was quite quite an adven­ture com­ing from a very aca­d­e­m­ic bent, to actu­al­ly mak­ing a com­mer­cial endeavor.

Estrada: Well obvi­ous­ly the CIX was one of them, of actu­al­ly being able to legit­i­mate­ly use the Internet for com­mer­cial traf­fic. ​‘Cause it was huge. I mean you can’t even imag­ine today not using the Internet from your cell phone or from your com­put­er, in your busi­ness, at home, wher­ev­er you are. And back in the 80s and 90s you could­n’t do that. You could only go to cer­tain places. So that was a huge, kind of sem­i­nal change in the Internet face at that time.

Also we did stuff like we were the first ones to offer dial-up Internet before you know…there were all of these old-school ser­vices out there, but a lot of our cus­tomers want­ed to be able to dial up. So we got modems and we hacked ​’em up and allowed peo­ple to dial up into the Internet. Which sounds real­ly crazy today, right, because who uses dial-up any­more but that was very edgy at the time. We worked with folks up in LA who were doing a net­work as well, and Jon Postel was lead­ing that. And he and I togeth­er decid­ed to pur­chase Cisco routers. And Cisco at the time was a lit­tle itty bit­ty start­up com­pa­ny in a ware­house some­where in the Bay Area in California. And that year when we placed our order from CERFNet with Cisco, it was 10% of the gross rev­enue for the year. And they did­n’t know how to ful­fill the order because it was the biggest order they ever got. So you know, you look now at Cisco which has…you know, streets, build­ings, and you think back at those times when Cisco was this lit­tle tiny com­pa­ny. So there was a lot of changes at the time that we were involved with.

Estrada: I actu­al­ly— In weath­er terms I think the Internet is sun­ny. You know, every now and then— I’m a Californian, right. So it’s always sun­ny except the ten days a year where it’s crap­py. And so you know, there’s gonna be times, just like California, where it’s cloudy or stormy but gen­er­al­ly speak­ing I think it’s sun­ny. The pow­er of the Internet is so amaz­ing. You know, every day I go it’s just so amaz­ing that when you want to look some­thing up, no mat­ter where you are you pick up your phone, you sit down at your com­put­er, or your tablet and boom you have all the infor­ma­tion you ever want­ed, right there at your fingertips.

I just don’t know…you know, there’s a lot of tur­moil about dif­fer­ent aspects of it but the inter­est­ing thing with the Internet if you look at the evo­lu­tion of it is that things have always sort of worked their way out. It’s sort of more like a com­mu­nal space, and peo­ple find ways around the prob­lems that will occur. I’m all about lemon­ade, so I think it’s a real­ly sun­ny future.

Estrada: Concerns, I don’t have a lot. I mean, I think some of the work that I’ve been doing recent­ly is try­ing to use encour­age old­er adults, the 65+ age group, to use the Internet more than they do now. It’s a real prob­lem for the old­er adults, because once you get out of the workforce…you know, the peo­ple in that age group, they’re not dig­i­tal natives like you guys are, you know, where you grew up with com­put­ers and cell phones and all that stuff. You’re used to that. But for peo­ple who are dig­i­tal immi­grants, it’s a much dif­fer­ent sit­u­a­tion, and try­ing to keep abreast of the crazi­ness and the pace of change in the Internet today is very hard for a lot of peo­ple who don’t have tech sup­port or think that it’s okay to keep a com­put­er for ten years before you throw it away. And things like that. So I think prob­a­bly my biggest con­cern now is to make sure that we have the infra­struc­ture in place to make sure that peo­ple can con­tin­u­ous­ly use the Internet as long as they are able to do so.

I guess my hope for the future of the Internet is it still just keeps on keepin’ on. And you know, grow­ing; we can get into more of the coun­tries that have real­ly had some dis­ad­van­tages of get­ting online because of infra­struc­ture issues.

Also in the US I think in par­tic­u­lar I’d real­ly like to see there be real Internet speeds. The kind of thing that Google is doing now of putting a giga­bit in so we can actu­al­ly make some mas­sive strides for­ward in the types of appli­ca­tions we use and the ways that peo­ple inter­act with each oth­er. It’s a won­der­ful, won­der­ful tool.

Estrada: You know, I guess the big thing now is the tran­si­tion of the Internet from the US gov­ern­ment out to some oth­er par­ties for the gov­er­nance aspects of it. The Internet Society has been around for a long time and been doing a fan­tas­tic job, as has ICANN, that’s real­ly sort of grown into their space and done a great job now.

There’s a lot of peo­ple who are very wor­ried about what’s going to hap­pen with all that, but I actu­al­ly think that a lot of the peo­ple that do Internet stuff are gonna con­tin­ue to do the right thing. [sighs] I don’t know, that’s pret­ty lame but you know. I don’t know. Action, today. I just— You know, I just mar­vel when I watch my 21 month-old grand­daugh­ter pick up a cell phone and use the Internet today and it’s just part of her life. And I just hope that that action can con­tin­ue in every coun­try all over the world so that we can con­tin­ue to have a glob­al econ­o­my and con­tin­ue to have a real­ly won­der­ful oppor­tu­ni­ty to mesh cul­tures and work with each oth­er to make a bet­ter place.