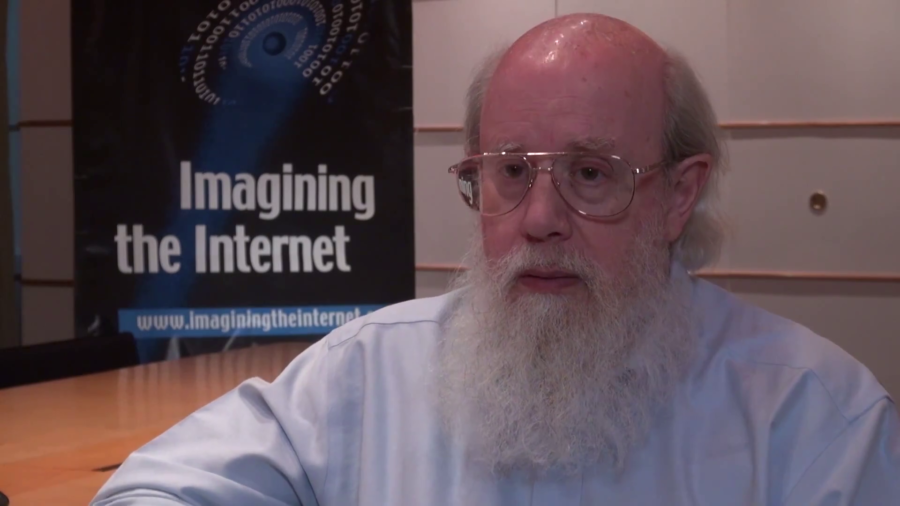 Scott Bradner: I start­ed out work­ing on the Internet Engineering Task Force in 1990, was select­ed to be one of the man­agers in the IESG—Internet Engineering Steering Group in about 1993, and was on the Steering Group for a decade. Also in 1993 I was elect­ed to the ISOC board, and was on the board for six years. Then became the ISOC Vice President for Standards a cou­ple years before I got off the board, then stayed in that role til ​’95. And in ​’95 became the sec­re­tary to the board, and I still am. So I’ve been on the ISOC board mail­ing list since 1993 and worked in the Internet space, in stan­dards in par­tic­u­lar, for the decade there and went into man­age­ment but also in just work­ing groups and the like. I was one of the two peo­ple that were giv­en the task of com­ing up with IP Next Generation, which is now known as IP ver­sion 6 and so…was involved.

Helped found NEARnet, which was a region­al data net­work in Northeast US. It was the highest-speed net­work at the time back in ​’88. So it’s been a fun time.

In January of 1983, they deployed the TCP/IP pro­to­col on the ARPANET. And that switched it from some­thing that was con­nect­ing com­put­ers, to some­thing that was con­nect­ing net­works. So Internet, as in net­work of net­works, that start­ed in January of 1983. Shortly after that, with the devel­op­ment of some of the region­al net­works from National Science Foundation, Harvard got con­nect­ed up to TCP/IP in ​’83 time­frame, and to the NSFNET in ​’86 time­frame. And those were very impor­tant eras because they proved that high-speed pack­et net­works would work. Particularly the deploy­ment of IP ver­sion 4—Internet Protocol ver­sion 4—meant that we were con­nect­ing net­works togeth­er, which allowed com­put­ers in var­i­ous places to talk to each oth­er rather than one com­put­er at Harvard talk­ing to one com­put­er at Stanford.

Bradner: Just like the world, the world does­n’t have a sin­gle type of weath­er across it. So the Internet does­n’t have a sin­gle type of weath­er. The weath­er fore­cast for the Internet is mixed. We are at a very tough time right now. For most of its life up until…certainly up until the late 1990s, most of the tra­di­tion­al world, tra­di­tion­al telecom­mu­ni­ca­tions world—the reg­u­la­tors and the stan­dards bodies—completely ignored the Internet because they thought it was a toy. They thought it was­n’t use­ful for any­thing. It was only as the usage explod­ed in the late 1990s that gov­ern­ments, and reg­u­la­tors, and tra­di­tion­al stan­dards bod­ies began to real­ly under­stand that there was some­thing here. And they’ve been try­ing to fig­ure out how to get involved in it since. And we are on the cusp of that. And that means that there’s a stormfront,

Now, whether that storm­front is going to come over us or avoid us, we don’t know yet. But cer­tain­ly the chances are…there is risk. There’s sig­nif­i­cant risk of some very rough times for the Internet as we know it. It’ll be a dif­fer­ent Internet. If the tra­di­tion­al stan­dards bod­ies had devel­oped the tech­nol­o­gy of the Internet, it would­n’t be what we have today. It would­n’t be that you could set up a web site. It would be that the car­ri­er, the tele­phone com­pa­ny, could set up a web site for you. And that’s a dif­fer­ent mod­el. And that’s the risk that we’re in right now, is that the gov­ern­ments want to con­trol it. As we’ve seen in Turkey in the last few weeks, when a gov­ern­ment gets poked, the reac­tion is to shut things down. And the devel­op­ments of the polit­i­cal sphere risk enabling that.

Bradner: Biggest con­cern is the one of reg­u­la­to­ry impact. There’s an awful lot­ta gov­ern­ments in the world that don’t like the idea of cit­i­zens being enabled. Of cit­i­zens being able to talk to cit­i­zens. They want to con­trol the data flow, the infor­ma­tion flow. And that kind of gov­ern­ment would if they could change how the Internet runs. And in that con­text, that would dra­mat­i­cal­ly change our abil­i­ty to actu­al­ly com­mu­ni­cate over it. So that’s the biggest fear.

The hope is that the peo­ple who’re on the ground, who have used the Internet, the kids and not-so-kids that have been work­ing on this, being enabled by it, com­mu­ni­cat­ing by it, whether it’s social media or any­thing else, whose lives are built around that, will see the dan­ger and will ral­ly against it.

I was hav­ing lunch at the Chinese restau­rant in the hotel here on Sunday, I guess it was. And there was a young woman and two kids at the table next to me. And the kids were maybe three and four; lit­tle girls. And one of the lit­tle girls was just buried in smart­phone. Just zip­ping through it to try and get some­thing on it. And that’s the gen­er­a­tion which is enabled by this. And if the pow­ers that be try to con­trol it, try to reduce what you can see and how you can com­mu­ni­cate, the hope is that those people—and you—and your gen­er­a­tion, will see that as a risk, will see that as a threat.

Bradner: Pay atten­tion. You can’t leave it to oth­ers. You have to pay atten­tion. That this is…while it’s in the polit­i­cal sphere, it is politi­cians talk­ing to politi­cians, try­ing to fig­ure out how to con­trol this thing. It’s in your future. It’s in all of our futures, but you’ve got more of a future than I. And so it’s more impor­tant to you to keep track of this, to see what’s going on and to speak up. And to agi­tate. And to under­stand what’s at risk.