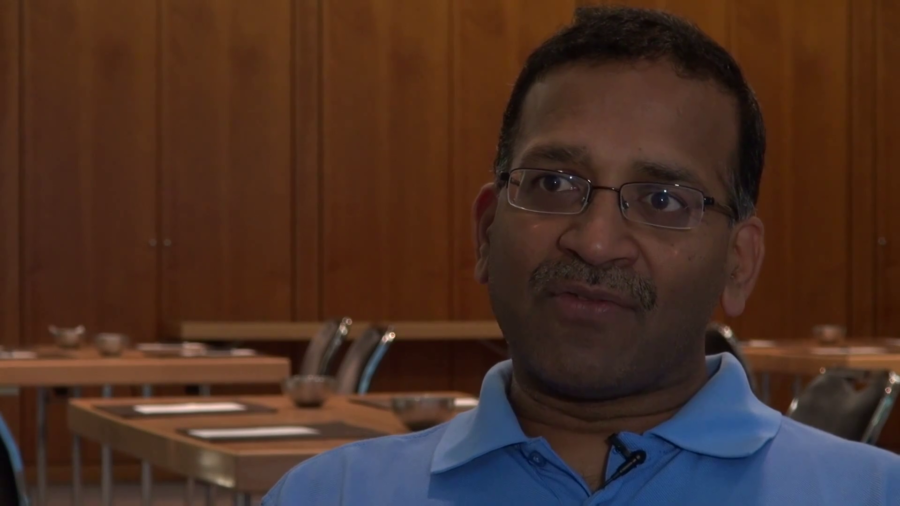 Ram Mohan: At Afilias, the com­pa­ny itself what it does is man­age large domain name reg­istries. It’s a domain name reg­istry provider. But our inter­ac­tion and my inter­ac­tion has been specif­i­cal­ly with .org. Lynn St. Amour and I were part of a team that helped make the case sev­er­al years ago, almost a decade ago, to go and say that .org’s home ought to be the Internet Society, and we helped cre­ate Public Interest Registry to real­ly build a top-level domain reg­istry that ran in an exem­plary man­ner that hewed to the val­ues of the orga­ni­za­tion, but at the same time tech­ni­cal­ly ran a very com­pe­tent and advanced tech­ni­cal group at the same time.

So that’s kind of how I got seri­ous­ly involved. But as time has gone on, the evo­lu­tion of that role has been real­ly inter­est­ing. Ended up begin­ning as a tech­nol­o­gist, but real­ly moved far more into think­ing about where’s the Internet going; what is at the core of the Internet; how do you make the core of the Internet a bet­ter and a stronger place. And that’s been the pri­ma­ry focus for me for the last few years.

Intertitle: Describe one of the break­through moments or move­ments of the Internet in which you have been a key participant.

Probably the most fun time? was April Fool’s Day in 2005, where I pulled togeth­er a group of four guys and we end­ed up pulling a prank on a whole bunch of folks and we end­ed up say­ing, ​“Oh my god, the entire sys­tem is down and is gonna stay down. It’s not com­ing up.”

And we con­vened a big man­age­ment meet­ing. You know, every­body who was paid to be wor­ried about it was on a phone—it was in a big glob­al con­fer­ence call. And I was explain­ing the prob­lem. My job was to explain the prob­lem and I was say­ing you know, ​“We don’t know what’s going on. Our sys­tems are just com­ing up and then they’re going down every three or four min­utes. And we’re work­ing on find­ing the real rea­son why. And we final­ly found the answer to it, and it was because a flux capac­i­tor is dying,” right. And for any­body who watched Back to the Future, they knew what it meant but it took a few min­utes for peo­ple to get oh, the flux capac­i­tor is dying? So, yeah, a fun time.

Mohan: Sunny. It’s in a great place. It’s got a tremen­dous future. There are always clouds on the hori­zon. But I’m the kin­da guy who looks at the clouds and says, ​“Okay, there might be rain but the sun’s still gonna come out. It’s still gonna hap­pen.” Look, the foun­da­tion of what we’ve built here on the Internet is a pret­ty strong thing. It’s a dis­trib­uted sys­tem. No one runs the Internet. No one owns the Internet. It works well. There’s always some set of folks who want to con­trol it. There’s always some sort of folks who want to change how it’s run­ning. That’s not by itself such a bad thing. There are some big fights com­ing on who con­trols the Internet, what’s the future of the Internet. And heck, we’re gonna be here push­ing back on those who say we have to cen­tral­ize every­thing, it has to be run by what­ev­er, three peo­ple or twen­ty gov­ern­ments. It’s not how we work. It’s not how it’s been working.

Now, I think it’s a fun place to be in terms of the gov­er­nance of the Internet and where the Internet is going, how it’s run. Because you have this real­ly neat com­bi­na­tion of folks in uni­ver­si­ties and acad­e­mia; you have pri­vate indus­try and you have gov­ern­ments; plus all the oth­er folks—civil soci­ety, Internet providers, intel­lec­tu­al prop­er­ty people—there’s a whole bunch of dif­fer­ent folks, but we’ve built a mod­el that you know, we are call­ing mul­ti­stake­holderism, etc. But fun­da­men­tal­ly what it means is that if you care, you get the oppor­tu­ni­ty to change the future, to shift it, right. And that is a com­plete­ly dif­fer­ent mod­el than almost any oth­er tech­nol­o­gy or any oth­er inno­va­tion in human his­to­ry has man­aged to do. To not only attempt to be a demo­c­ra­t­ic sys­tem, but to build mech­a­nisms that allow for lit­er­al­ly any­body who has an opin­ion, that makes sense, to actu­al­ly come through and be able to exert influ­ence. That’s fabulous.

Mohan: The hope is that the core of the Internet stays strong, and cohe­sive. There is a con­tin­u­al chal­lenge there. To some extent you have entropy at work there, right. There’s always this… So, to restate in a dif­fer­ent way, keep­ing cohe­sion at the core of the Internet is an impor­tant thing. I’m not wor­ried that that’s going to go away. But you have to con­tin­u­al­ly pay atten­tion to it. Because that func­tion of con­verg­ing, at the core is a crit­i­cal one. When you do that well, what it allows is at the edges of the Internet it allows for things to hap­pen. For inno­va­tion, for ideas to hap­pen, right. Facebook did­n’t have to go and ask any gov­ern­ment for per­mis­sion to start up Facebook. Twitter did­n’t have to do that. But any of the major inven­tions and the major job cre­ators, econ­o­my cre­ators, things that change how the econ­o­my works, things that change how we as human beings inter­act with each oth­er, on the Internet you gen­er­al­ly don’t need to ask per­mis­sion. I think that’s a great place to be. And that allows for mas­sive dis­rup­tion. So, pre­serv­ing that mod­el I think is impor­tant. And I there­fore always pay atten­tion and I wor­ry when you have forces that try to impinge on that, try to change it.

So my hope for the Internet is that it stays strong, and sol­id at the core. That the folks who are involved in it under­stand that nec­es­sar­i­ly by choice, it should be a…a small core, not a very big core, right. And that you allow the edges to just grow. And you don’t try to con­trol those edges. You try to con­trol the core.

Intertitle: Is there action that should be tak­en to ensure the best pos­si­ble future?

Mohan: I would not say that there is one sin­gle action to take. You have to pay con­tin­ued atten­tion. You have to keep get­ting gen­er­a­tions involved to care about why these things are impor­tant, right. You run the risk that— I think you see in the util­i­ties area where at the core of it, most of us don’t care how we get our elec­tric­i­ty. We turn on the switch and we expect the lights to just go on, right. We’re get­ting close to that point on the Internet. We get our device out and we expect the Internet to be there. And it’s impor­tant to keep enough peo­ple engaged in under­stand­ing how it gets there. And that’s actu­al­ly a pret­ty spe­cial thing, how it works and to ensure that that continues.

Mohan: You know, the Internet and work­ing in tech­nol­o­gy is just a joyride. It can be a bit of a roller coast­er at times, but it’s a fun place to be. And any­body who is inter­est­ed in mas­sive intel­lec­tu­al chal­lenge, and poten­tial­ly down the road to actu­al­ly make mon­ey as well, it’s an awe­some place to be. So you know, it’s a great life if you man­age to get some­thing that’s on the Internet and that is mean­ing­ful on the Internet.