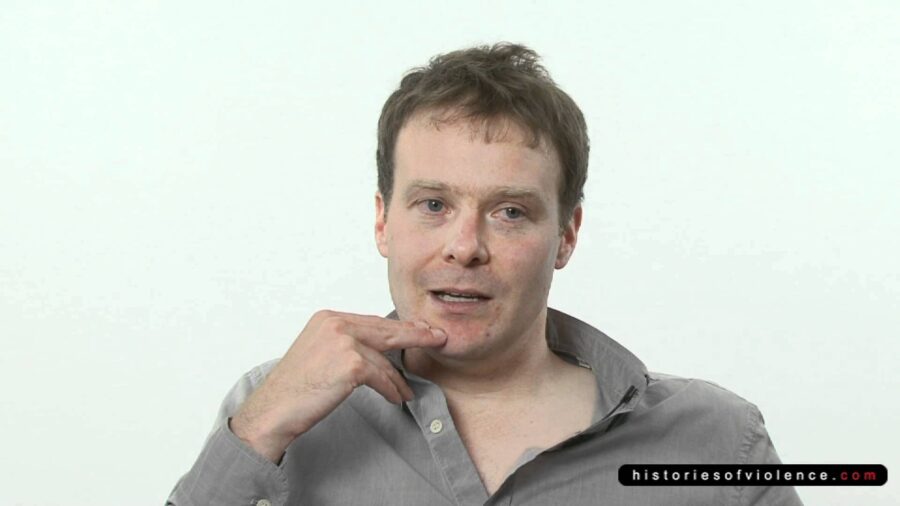 Tom McCarthy: Take Abu Ghraib, for exam­ple. Those amaz­ing images that emerged a few years ago. When I saw those, I was remind­ed of this nov­el by Bernard Noël called Le Château de Cène, The Castle of Communion, that came out in 1969. And it’s a kind of—you know…almost obs—well, obscene, porno­graph­ic alle­go­ry of what was going on in Algeria at the time, what his own gov­ern­ment was doing in Algeria. So in the Château de Cène there’s all these kind of scenes of dom­i­na­tion, sado­masochism, rape, etc.

With the Abu Ghraib pho­tos, you don’t need a Bernard Noël to do it. The sol­diers them­selves are kind of enact­ing those scenes. And you know, on the one hand there’s some­thing absolute­ly repul­sive and dis­gust­ing about it. And on the oth­er hand, I find it almost kind of sub­ver­sive that… Not that they do it, but that these pic­tures kind of emerge into the pub­lic realm. The kind of poetic…truth of the over­all you know…project. The kind of poetic…truth of the over­all you know…project…[chuck­les]…the over­all neolib­er­al mil­i­tary project that was going on at that time just sud­den­ly erupts for all to see.

I’ve been reread­ing Sade recent­ly, The 120 Days of Sodom, which I haven’t read since I was like 22 or some­thing. And what real­ly struck me…it was just a cou­ple of weeks ago. What real­ly struck me about it now is…well first­ly the first sen­tence could have been writ­ten by Agamben, or in fact Naomi Klein, like yes­ter­day. I mean, it says some­thing like ​“It is in the state’s inter­est to main­tain a con­di­tion of ter­ror, so that it can sus­pend all demo­c­ra­t­ic laws and get away with what it wants.” And then the sec­ond sen­tence says ​“And indi­vid­u­als and busi­ness­es that have a foot in the pres­i­den­t’s office can do very well in times like this.” I’m mean…they could’ve just writ­ten ​“Cheney,” you know. It’s incred­i­bly contemporary.

But what is amaz­ing is that— There’s loads of amaz­ing things about Sade. For exam­ple all of the events that take place in it are reen­act­ments. That these per­verts have set up this whole scene, this kind of prison sit­u­a­tion, have peo­ple tell them sto­ries that they then reen­act and embell­ish sex­u­al­ly onto their pris­on­ers. It’s very kind of Abu Ghraib.

But, what real­ly struck me as I read it was that Sade’s heroes-slash-antiheroes, his lib­er­tine per­verts, are very clear that what they’re doing is crim­i­nal. They go away. To Switzerland. [chuck­les] They sequester them­selves in an inac­ces­si­ble cas­tle. And they’re proud of the fact that what they’re doing is against the state, it’s against the law, it’s against order. Whereas now, almost iden­ti­cal scenes are being enact­ed, not against order but in the very name of order, of jus­tice, of lib­er­ty, of free­dom, by the state itself. It seems we’ve come that far that that total gap has been com­plete­ly closed.