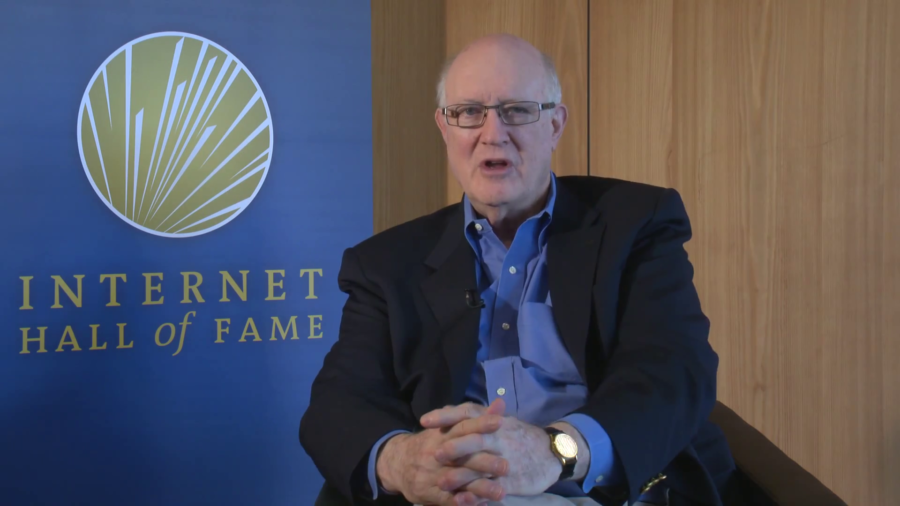 presented by Steve Crocker
in Internet Hall of Fame 2012

Hi, my name is Steve Crocker. Today I run a small com­pa­ny, Shinkuro, Inc., and I’m chair­man of the Board of Directors of ICANN. I’ve been involved with the Internet Society for vir­tu­al­ly its entire life. Years ago, I had the good for­tune to be involved with the ear­ly days of the ARPANET and played a small role in help­ing build some of the tech­nol­o­gy, and in build­ing some of the social struc­tures that brought every­body together.

So, look­ing back, my proud­est achieve­ments start of course with my chil­dren. And I have to cred­it a suc­cess­ful mar­riage, at least one that’s still in place. But from a tech­ni­cal per­spec­tive, being involved with the devel­op­ment of the Internet is absolute­ly one of the most reward­ing and pleas­ing expe­ri­ences I’ve ever had.

So, the Internet is a very very big oper­a­tion. And with respect to my par­tic­u­lar role and par­tic­u­lar achieve­ments, the results of things that I was respon­si­ble for start­ed out in a very mod­est and sort of unin­tend­ed way. I was part of a small group of grad­u­ate stu­dents at the first four sites of the ARPANET: UCLA, SRI, University of California Santa Barbara, and University of Utah. And we were hand­ed the task of try­ing to fig­ure out what to do with this net­work that was going to be giv­en to us, or imposed on us depend­ing upon your point of view. And so we had to orga­nize from scratch. And it was an inter­est­ing tech­ni­cal chal­lenge. Open field. I mean, no direc­tion. We knew the basics of what the capa­bil­i­ties were going to be, but there was no require­ment that said you have to do this, you have to do that with it. So we had to try to fig­ure out what to do.

And that led to two things. It led to an approach, that has become extreme­ly impor­tant, of open archi­tec­ture and of care­ful lay­er­ing so that peo­ple can build on top of what oth­er peo­ple had done. We were extreme­ly con­scious that we had no idea about all of the things that need to be done, but we knew that there would be many inter­est­ing things. And so we want­ed to to pro­vide build­ing blocks that oth­er peo­ple were going to use as opposed to a com­plete fin­ished sys­tem that would have every­thing. That was one side of it.

The oth­er side of it was, as our ideas start­ed to per­co­late we knew we had to write them down, and we also knew that the mere act of writ­ing them down was going to trig­ger some reac­tion. And pos­si­bly even a neg­a­tive reac­tion. We were just grad­u­ate stu­dents. Nobody put us in charge. We had no author­i­ty. And it fell to me to orga­nize these notes that we had decid­ed that we were going to write, and I found myself extreme­ly ner­vous that as I said the act of writ­ing these notes might trig­ger a neg­a­tive reaction.

So I hit upon this sil­ly trick of say­ing well, we’ll just call every one of them, no mat­ter what they are— They might be super for­mal or they might be com­plete­ly infor­mal. But we’ll just call every one of them a ​“request for com­ment,” as a mat­ter of form. And I thought that this was a tem­po­rary device that would last a few months until the net­work was built and we had orga­nized man­u­als and doc­u­men­ta­tion and so forth.

So here we are more than forty years lat­er, Requests For Comments are still the lin­gua fran­ca for the stan­dards process. ​“RFC” is in the Oxford English Dictionary. And in per­son­al terms, my involve­ment in the net­work was a dis­trac­tion from what I thought was a more seri­ous research agen­da. And my involve­ment with the RFCs was a minor admin­is­tra­tive chore relat­ed to the net­work. And yet that’s the only thing I’ll be remem­bered for.

So, I’m extreme­ly pos­i­tive about the future of the Internet. I think as good as it has been, there are a num­ber of very pos­i­tive steps to go. There are some neg­a­tives. The secu­ri­ty issues and spam and phish­ing and so forth. And they’re non-trivial. We’ve got to deal with them and fix them over time. But on bal­ance I think that we’re going to see even more pay­off from the Internet than we have seen today. Everything will be con­nect­ed. And there will be… It’s fun to make pre­dic­tions. So, one of the pre­dic­tions is the Internet will, in a way, sub­merge and stop being so vis­i­ble, and just be part of everything.

So, if I had do offer up some advice to cur­rent gen­er­a­tions and future gen­er­a­tions, I would say get involved, and get involved from the point of view of enabling oth­er peo­ple. Of being of ser­vice as opposed to try­ing to do some­thing that is ego-driven or all about try­ing to grab fame or for­tune. The thing that was very evi­dent to me when I first got involved was that this was not a one-man or every per­son for him­self sort of thing—that it real­ly was a group effort.

And that’s worked out enor­mous­ly well. It’s brought enough finan­cial reward. It’s bought enough atten­tion. And bet­ter than either of those, it’s brought quite a bit of per­son­al sat­is­fac­tion, part­ly by see­ing what I was able to help cre­ate. And part­ly just because it’s been a great ride. I mean, it just hits on every cylin­der: enter­tain­ment, and sense of sat­is­fac­tion, and per­son­al grat­i­fi­ca­tion to have been there. So I would say to any­body who’s get­ting into it, come with that atti­tude that you want to be help­ful to oth­ers, and gen­uine­ly, and that you want to help oth­ers suc­ceed. And very good things will happen.